I haven’t been feeling great about my baking lately, I’d been over proofing my bread and really disappointed in how they turned out.  I decided that I needed to go back to a recipe that I’d made many times when I first started to bake sourdough, so I went back to Maurizio’s Beginner Sourdough from The Perfect Loaf.  For some reason the flavour of this bread always speaks to me.  However, I decided I still wanted some sort of add in, but one that wouldn’t negatively affect the crumb too much, so since I love sesame seeds I went with black and white sesame seeds.  Now the past few bakes were overproofed so I was expecting to deal with the same this time, but strangely enough my starter suddenly was less active than normal and my levain took much longer to rise than usual.  Then bulk fermentation of course took much longer because I was starting with a less active levain.  I had to bulk ferment at a higher temperature than usual and for longer to try to get this dough fully fermented, I pushed the temperature to 82ºF and bulk lasted 6 hours which is unusual because it usually only takes 4-5 hours for this recipe at 80ºF.  I tried the trick of pulling some of the dough early on about the size of a ping pong ball and placed it into a small narrow glass.  I used this to judge the rise of the dough and was thus able to judge a 40% rise more accurately.  I think I will start using this trick more often especially during seasons when the temperatures and conditions are rapidly changing.

Autolyse for 4 hours with salt.

30 mins did letter fold on the counter

left on counter in banneton in a bag for 20 mins then into the fridge at 4ºC for 14 hours cold retard.

I used a silicone pastry brush to generously brush water on the dough after scoring and then once the dough was placed in the dutch oven spritzed a bit more water into the dutch oven.  I was hoping to get more oven spring and also more blisters with this and I think it worked.  I believe a long cold fermentation also contributes to good blisters and I think if I did a longer cold retard the blisters may have been even better.

Baked at 450ºF for 20 mins in preheated dutch oven

Lid removed and continue to bake 425ºF for 12 mins 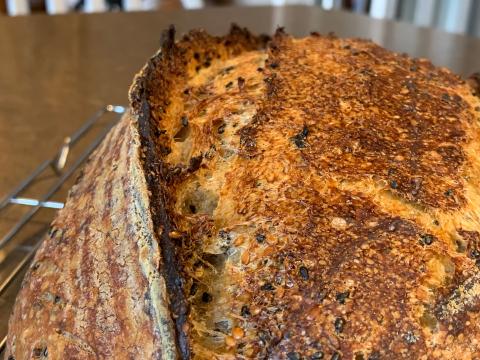 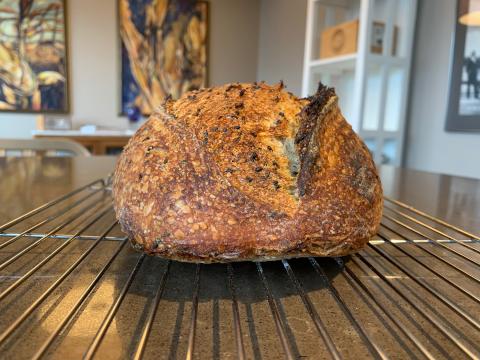 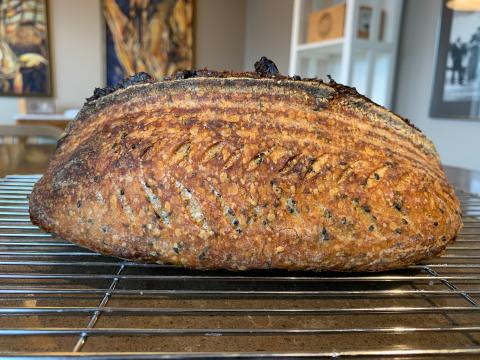 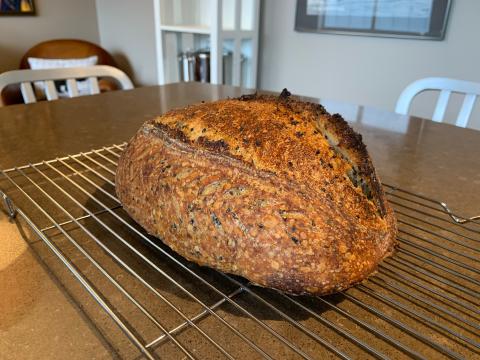 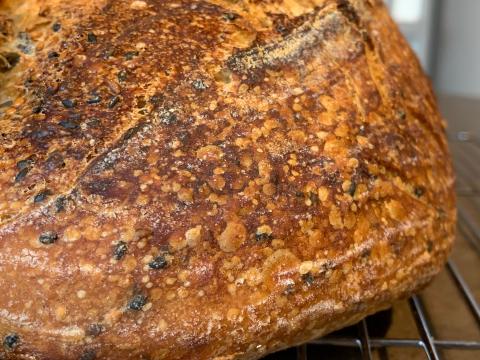 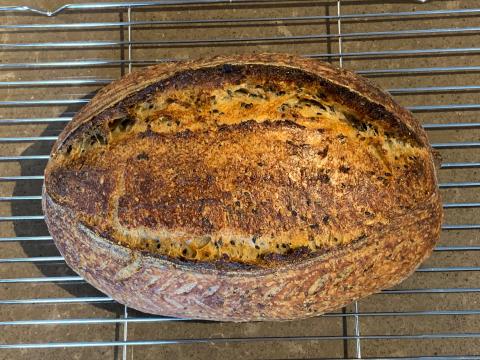 Great spring. fantastic color, wonderful score; the seeds are a nice touch. Love those bubbles on the crust.

Thank you VRini, it feels like a comeback after the recent poor results so it is nice to have a good bake.

these are some beautiful breads, well done.

Thanks so much baker85, it feels so good to have a good bake.

It's so hard to adjust the process every time the weather changes! Definitely one of the challenges of sourdough.  I need to get back into summer baking mode as my 66 degree apartment days seem to be behind us for now.

Thanks Ilene, having not had that many seasons of change since working with sourdough, I didn’t anticipate the effects well enough in my past few bakes.  Then the challenge of my starter acting slow was really weird, I don’t know what is up with that.  I’m going to give it a few more feeds more than usual before I bake with it again to make sure it is active enough though.  Anyhow, hopefully the crumb will be good and not full baker’s rooms.

I think I will employ the small bit of dough in a narrow small glass routine every time I bake now, it really came in handy with this last bake.  I’m still really needing to learn to judge bulk fermentation and it is an additional tool I hadn’t used before.

This looks beautiful and with the sesame seeds it must smell fantastic also. And congrats on the great troubleshooting too.

Thank you Suminandi, the loaf is on my counter teasing me with the glorious smell of sesame seeds.  I was going to wait until lunchtime tomorrow to cut it but I might give in and have a slice or two with dinner.  I’m happy I was able to troubleshoot and come up with something that worked.  But of course, I won’t know for sure until it is sliced.

should get you out of your recent baking blues!  Looks fabulous.  And the panels on the back wall are conspicuously color-coded to the batard.

Thank you Alan I’m feeling better after this bake.
Benny

Benny.. great bake. That loaf looks as good as it gets. Very nice work !! frank!

The flavour of this bread doesn’t disappoint, so long as you love sesame seeds and I love everything sesame.  I think if I were to bake this again, I bulk a bit longer maybe to 50% increase in volume as that might have opened up the crumb a bit.  But I’m not disappointed, this has been the best bake I’ve recently had. 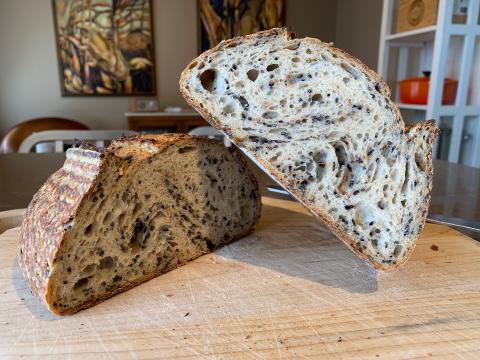 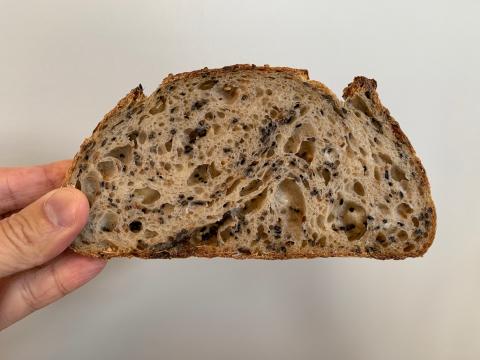 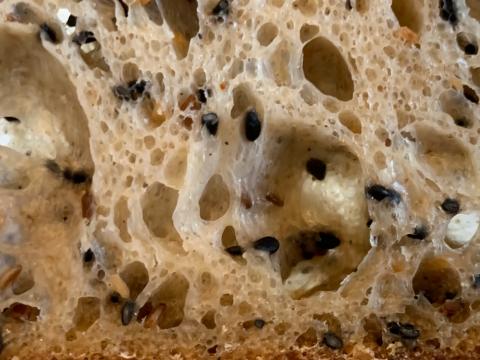 I had the same feeling a few weeks ago, had all sorts of recipes come out great and then the weather changed and I felt I lost everything I learned. But the good part is it's just a phase in a longer process of improving. I'm sure things will bounce back.

That being said, the loaf looks.......absolutely amazing. It made my mouth water even though I just finished eating. Will definitely try the recipe using the sesame seeds.

Have a great day!

Hi Ade, nice to know that others go through these periods as well.  Thanks for the comments on my bake, I appreciate it.  I hope you try the recipe and enjoy it.

Just wondering when do you take out the little ping pong ball for the test? At the beginning of bulk fermentation or after the lamination/coil folds?

Thanks! Have a great day,

Well I’ve started it right at the start of bulk fermentation but after salt has been added., but I’m not sure what others do.

Will try it that way also, thanks!

A great looking loaf and nice use of black and white sesame seeds which are a great visual combination.

Thank you Lance. I can’t take credit for the fermentation test jar I read about it on Full Proof Baking. I am going to use it more regularly until I have a better handle on reading fermentation more accurately.
Benny

As a point of follow up on my comment about my starter/levain and this dough fermenting so slowly, I think I have it figured out.  I wondered if the water in Toronto had suddenly changed, but I don’t think so now.  I’m working on a two stage levain build to make baguettes for the first time and I noticed that the levain was fermenting super duper slowly.  I had switched to a new T55 flour I had bought when my usual bread flour was unavailable a few weeks back that I used for the past couple of weeks.  So this morning I built a new levain using a new batch of my usual bread flour I was able to get yesterday and after 2 hours it has grown about the same amount that the levain built with the T55 flour took 10 hours to grow.  Of course they were built using the same water, so I guess the problem wasn’t the water.  The T55 flour must be bleached, it didn’t indicate that it was but that is the only thing I can figure out would be the cause of this problem.

Try adding 20% whole grain rye (best) or wheat flour when building your levain with the T55.

Hi Lance. Even last weekend when I built the levain with 50% whole wheat the growth was super slow. I really thought something was wrong with my starter or water but when I feed my starter 100% whole wheat it grows as I expect it to.
Do you think it is plausible that bleached flour could be the culprit?

Well Benny, I don't have any experience of bleached flours as fortunately we don't have them in the UK - yet!

If the levain was slow to build even with 50% whole grain flour present, this does not suggest a lack of nutrient, but more of a growth inhibition - possibly from the bleaching chemicals used? In theory these should all have been used up in the bleaching process, leaving only some of their decomposition products.

There seem to be a variety of chemicals used to bleach flour so it would be difficult to pinpoint the culprit, if indeed there is a culprit. The evidence you provide seems fairly conclusive, but I expect the miller would be in denial, if quizzed.

Best to simply learn from the experience and avoid bleached flours whenever possible, although I know that getting your preferred flours (or sometimes any flour) has not been easy of late.

There are various flour bleaching agents that can be used and one of them is benzoyl peroxide. Once it has done its bleaching work, it decomposes into benzoic acid. Now benzoic acid, usually as sodium benzoate, but same effect, is used as a food preservative and is especially effective as a mould inhibitor.

Of course yeast is a mould, so maybe there is some inhibition of yeast growth by it. This may explain why some bleached flour is OK with levain because there are other bleaching agents that can be used that may not affect the starter growth.

Thank you for the information on bleaching agents used in flour Lance, I wasn’t aware that benzoyl peroxide was used to bleach some flours. Here I thought it was just a dermatological pharmaceutical.