So, I have made a sourdough starter, like everyone else this quarantine, to keep me occupied and learn something new. I have been keeping a journal in a notebook to record recipes and changes I make, but since I started this account I thought it would be fun to document it here as well, for anyone else feeling a little intimidated by their first starter and just for me to look back on.

Day 2-7: Growing and developing yeast (1-6 Apr)
Added 1/2 cup water and flour each day, switched to whole wheat on day 3 (I know you are not supposed to do that, but it turned out fine haha). Started discarding all starter but 1 cup and fed. It started smelling like fresh bread around day 6ish, which meant it was making yeast! It would be very bubbly in between feedings.

Day 8: The first mistake (7 Apr)
Since my starter was bubbly and active and ready to use, I made some onion bread using a recipe from a bread machine cookbook. At this point I didn't realize sourdough breads rise for anywhere between 4-12 hours, I was just looking for a way to make my own yeast since the stores were all out. So I let this bread rise for just 90 minutes and gave up and baked it anyway rather than throwing it out. Also, there may not have been as much yeast as I thought in the starter.

Day 10: The first actual sourdough loaf!! (9 Apr)
I used this half-batch recipe I wrote down from a combo of King Arthur Flour and a few other blogsites:

I fed the starter the morning I baked it then put it in a warm spot until lunchtime, and it got nice and frothy. The bread came out ok, it was very dense and stopped rising after only maybe rising 1/3 of the way (5.5 hours). At least the flavor was good, slightly less sour because of the young starter. I do think it looked pretty though! 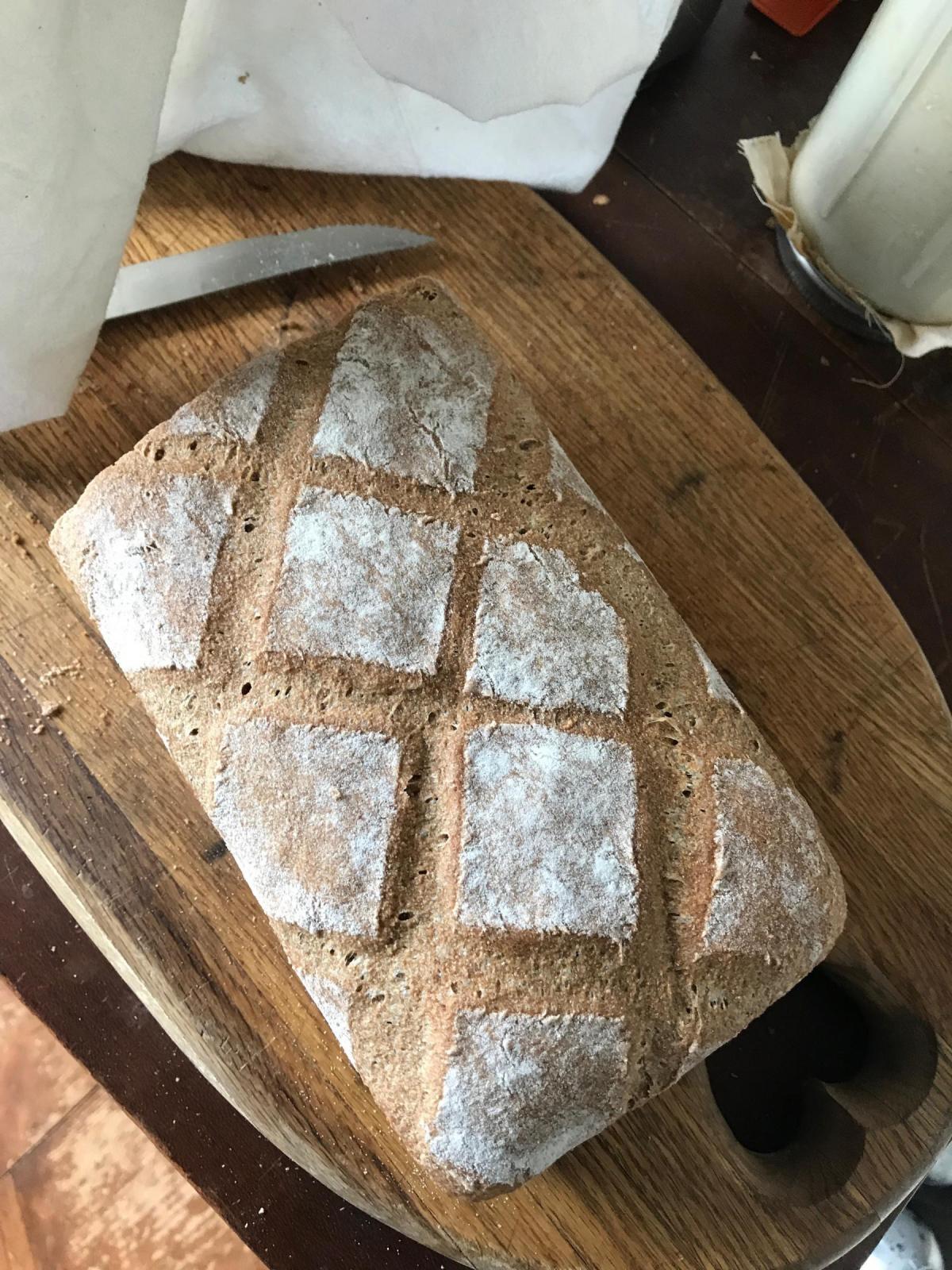 Day ?: Sourdough #2
After the first sourdough, I kept the starter on the counter and fed it, then I ended up refrigerating it while I was busy with classes, for about two weeks. I did take it out and feed it every few days, just to make sure the yeast wouldn't starve and to develop it a little more before I used it again. I kept the cloth cover on it the whole time, and had to switch to white flour again, oops. The second sourdough came out much better than the first. this time, I made sure the starter was fully active and doubled before using, and used a little more flour (1/2 cu) than the recipe called for (I used all white flour). I also kneaded it much more, and baked it in a dutch oven rather than a loaf pan. I rose it in my "proofing box" I made with a space heater under my desk and a blanket, which kept the space a nice 80 degrees. It rose much better, but the inside was still dense and it didn't form a nice heavy crust or make as many bubbles. It still was edible enough, and was eaten by my family within the week.

Sourdough #3:
Again I took another break from bread, and came back to my starter after semi-abandoning it in the fridge. It seemed okay, and after two days to recover it was ready to be used again. I followed the same recipe (white flour again), but proofed it in the proofing cave for almost 10 hours, then baked. The crust was chewy and light, the crumb not quite to traditional sourdough but almost, and the sourness of the starter was really coming through (eau de refrigerator). By far the best attempt. I really wish I had pictures, because with the white flour and the dutch oven I use, the loaf really comes out looking like a cheese wheel. (Also, getting it to dome is a problem I've been having, but my dutch oven doesn't have a round bottom like others).

Sourdough #4:
Pretty much a repeat of #3, but cheated with a little yeast to see if I could get it to dome. I am having trouble making a nice crust, but the crumb is improving and so are my kneading skills and ability to gauge how much rising/kneading it needs.

Whew! For the future, I am definitely using a pot/dutch oven thing that the loaf doesn't get stuck in because of the lip. Also, switching back to whole wheat as soon as the store has some. Would like to try nuts, raisins, or honey/molasses in the dough as well. I also have found that putting some olive oil on the kneading surface keeps it from sticking but also from getting too thick from adding flour to it.

Welcome to TFL and the sourdough world!  (Though not all TFL-ers are sourdough-ers.)

Congrats on your starter and your sourdough loaves!

Lovely scoring on that loaf! Was this quarantine sourdough your first foray into baking bread, or had you baked with commercial yeast in the past?