Another step on the baguette trail---or perhaps highway, given how many other people also seem to be working on these!

but scaled down to make three 11 inch baguettes at 240g each.

At the moment, my baking setup is: put two large cast iron pans on a low rack in the oven and heat them until very hot. Place loaves on a thin aluminum baking sheet. Place a disposable foil roasting pan upside-down on top of the baking sheet over the loaves. When the pans in the oven are hot, place the baking sheet on top of them. After the steaming time has elapsed, remove the roasting pan and move the loaves to a bare rack in the middle of the oven to stop the bottoms from scorching and finish the bake.

I. Bulk fermentation went fine; nice bubbly dough. Did 300 French folds per the instructions and gluten development seemed alright. Had difficulty shaping: the folds went fine, but the dough resisted when I rolled to elongate it. The crust was somewhat thick; the bread was similar to the second batch in appearance.

II. Bulk fermentation went a little long---dough was quite bubbly! To avoid the thick crust from the previous loaf, I developed the gluten more heavily. This seemed to work---the crust was noticably thinner than on the first batch. The dough again resisted when I rolled it. The first one I just rolled, but the second two I let rest for about a minute after doing the lengthwise folds, which made things easier. There was not a noticable difference between the loaves after baking.

Crumb from both bakes was fairly close. Not dense or gummy, but more like the crumb of grocery store Italian bread than a baguette. Scores opened better than on the first run of baguette practice, but not there yet---I may also have removed the pan that I'm using to steam them a little early. 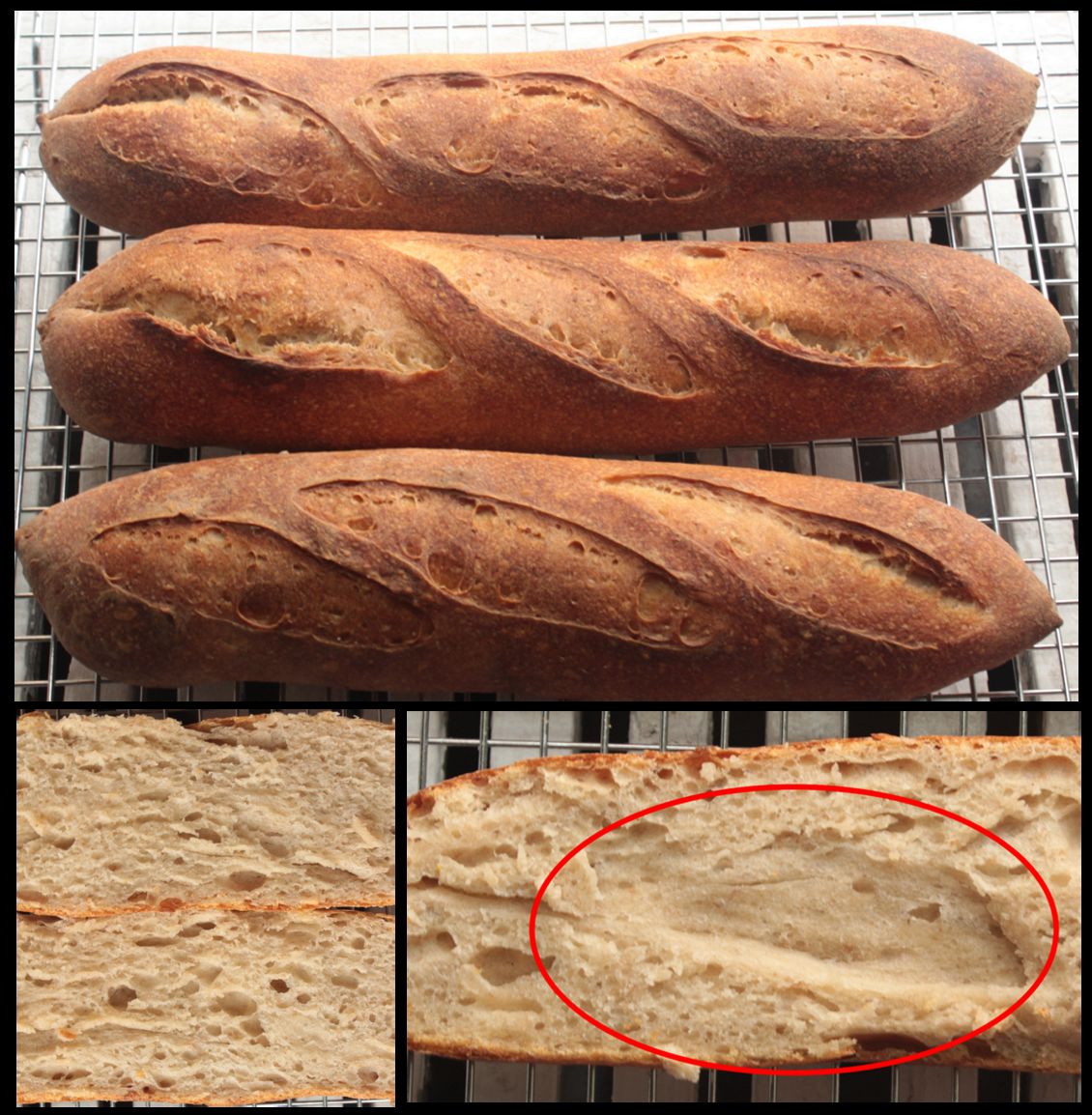 1. Some loaves exhibit strange crumb artifacts such as the one circled in red above. As far as I can tell, they are caused by the way that I fold the loaf. They aren't denser than the other portions of the bread, but they do have a sort of smooth wall that separates them from the rest of the crumb. How do I prevent these?

2. Why does the dough resist elongation? I'm happy to give them a minute's rest, but nobody else seems to need to do this.

3. How do people keep track of the seam when shaping? After I roll the loaves, it becomes very faint and I need to carefully examine the loaves in order to find it.

1.  Despite a lot of popular advice you may be playing it gentle with the dough on degassing.  So many people are fearful of popping bubbles but that kinda a myth I think.  If you watch professionals pound out baguettes they are rarely delicately patting the dough and instead have a rather heavy hand.  Those gas pockets are hard to kill and if baked right even the smallest of pockets will expand many times over.

2.  Possibly the flour is the cause.  Baguettes work best in my experience with lower gluten flours.

3.  The final shaping stage is very few steps if you dont see a seam you may be over working the loaf.  The ideal baguette should roll out in a few passes.  I imagine you're fighting the elasticity and over doing it until eventually the seam just disappears.

Generally it's best to be aggressive degassing and then spending only a short amount of time shaping.  Ie quick and somewhat forcefully.  Say about one minute from degas to final shape (and that's even kind of a long time)

If it's the bake that is responsible for the crumb, then perhaps I just need to wait for the day when the local kitchen store re-opens to pick up a baking stone---my current setup for baking these is quite ad-hoc.

I'll certainly keep your shaping tips in mind on my next run of these.

Thanks for the advice

A stone is really important although some of these baking trays do a good job.  Main thing to note is that wont get a good crumb if you loaf doesn't fully inflate and scores burst withing 5 or less minutes.  If it doesn't rapidly expand and stay expanded in this time it's kinda game over usually. Looks like you're getting there but judging from your pics it appears you need some more energy - your scores a tell tale sign that they rose too slowly:)

The part circled in red looks like a seam or fold that didn't bind together. I have not done many sourdough baguettes mostly yeasted versions that are easier to work with than sourdough, in my hands. The sourdough seemed looser to me and harder to seal the seams. It is harder to work with a fully fermented dough and it can get too elastic. I try to error on the short side of bulk fermentation.

Look forward to seeing your next BP

Overly full fermentation seems to me like it could very well be my problem---both batches of these fermented pretty fast, so I'll try shorter next time.

Thanks for you insights

A little IDY added to your sourdough baguettes. I did it the last time I made them and wrote about it here  I did it to hopefully soften the crust and to help the proof and it seemed to work for me. You also might want to check out the King Arthur Isolation baking show. Martin Phillips does a nice baguette episode. Good luck getting a baking stone.