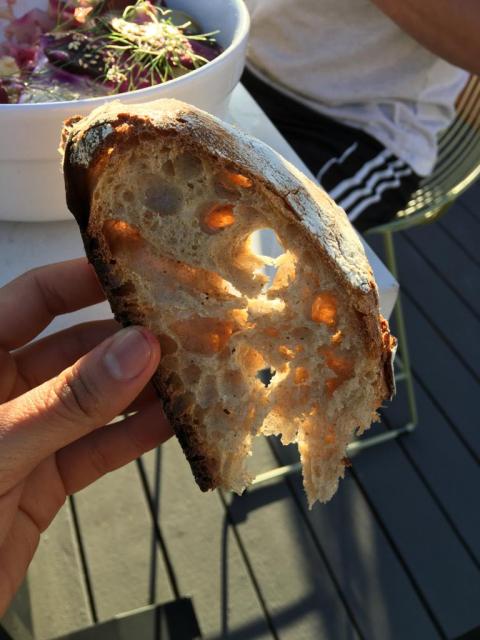 I think I used to underproof my loaves (you can see my old posts somewhere). I was too afraid of overproofing and wasn't really sure what to look for in the poke test.

To be honest, all descriptions of the poke test I've read have been pretty vague, they all mention that the dent should spring back, but not fully... that you should press down hard, but not too deep... so how fast should it spring up? How much of the dent should be filled at what rate? How deep should the poke be? What it really seems like is that what you're looking for in a poke test both depends on and indicates so many things that the world's most advanced pattern recognition program (i.e. your brain) is reading in all the factors and outcomes and coming up with an intuitive answer. In other words the poke test is not a simple formula. Bakers rely on experience to build intuition and how we know what we're looking for is almost impossible to explicitly articulate.

It's like sexing baby chicks. No one actually knows how the people at factory farms do it, and they couldn't really tell you either. Apparently most of them say they look at the rear end of the chick and just 'see' it (Horsey, 2002). I'm not saying learning to use the poke test is quite as hard, but it's definitely not as deterministic and foolproof as people say it is.

That's a long rant to say that instead of doing an impatient 40 min bench rest and 40 min final proof, today I took my dough out of the fridge, left it on the counter while I went out for a walk, bought some groceries, and baked it 2? 3.5? hours later. I finally got a relaxed looking crumb.

It's great when we have those breakthrough moments. I know I could be learning so much faster with a teacher... as it is, there's no one to point out the right and wrong dough textures and what they mean. I just have to watch videos and keep on baking. It's like reinventing the wheel from watching movies of cars.

Congratulations on your bread. It looks lovely.

Very nice bake, I think a lot of us newer bakers are scared of over-proofing and end up under-proofing.