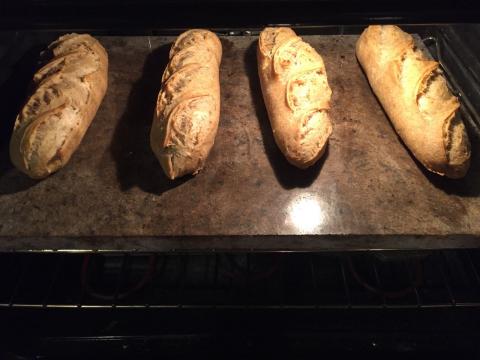 I’d last made this bread just over 3 years ago.  A long enough gap, too long in fact, to have gone without another bake.  On the last dance, I was in the middle of my 125% rye levain waltz.  For this bake I changed it around in several ways, hence this new posting.

This was the first time I used the potato skins as part of the mix instead of the peeled potatoes of prior bakes.  Having lost track of my potato ricer, I opted for the food processor, which yielded a somewhat grainier potato to add to the initial mix.  I also shifted the mix around to employ a 100% hydration AP levain.  And a third change.

These came out a shade browner than the past pictures reveal, and I think I know why.  Mr. Hamelman uses only Bread flour(85%) and WW flour(15%). On my previous bake I subbed out the WW with the rye levain, still maintaining the 85/15 balance.  Here I used both WW and Rye, the flours therefore amounted to 70/15/15, and hence the browner bread and a further change from the past.

The scoring didn’t quite grigne as wide.  Perhaps, being such a low hydration dough I scored a bit too straight into the dough rather than at a sharper angle than I do with higher hydration doughs.  This is not an extensible dough and it takes a bit of work, short of manhandling, to even manage the limited length baguette that my oven will accommodate.

Still, I’m pretty happy with the result and the flavor. 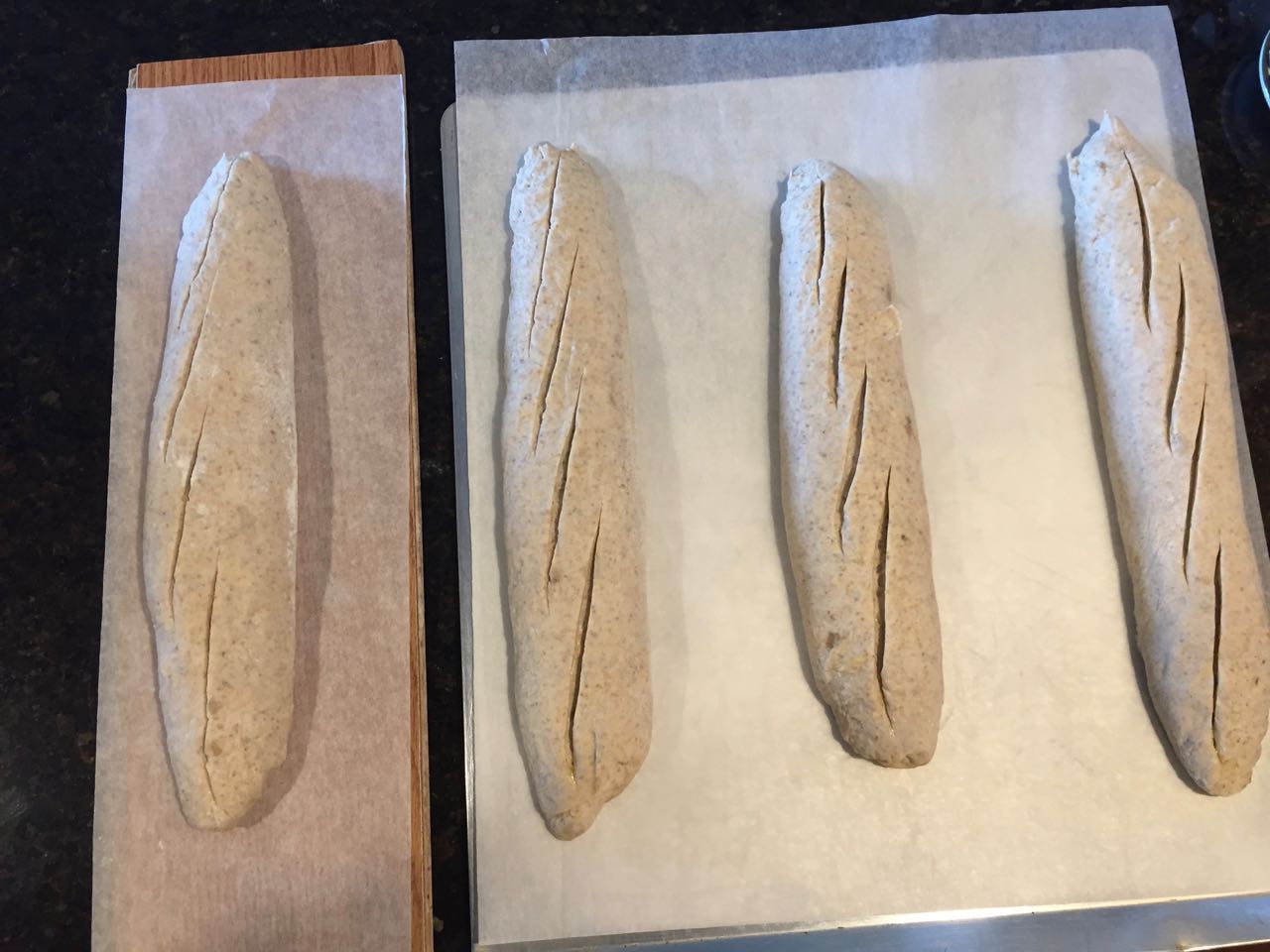 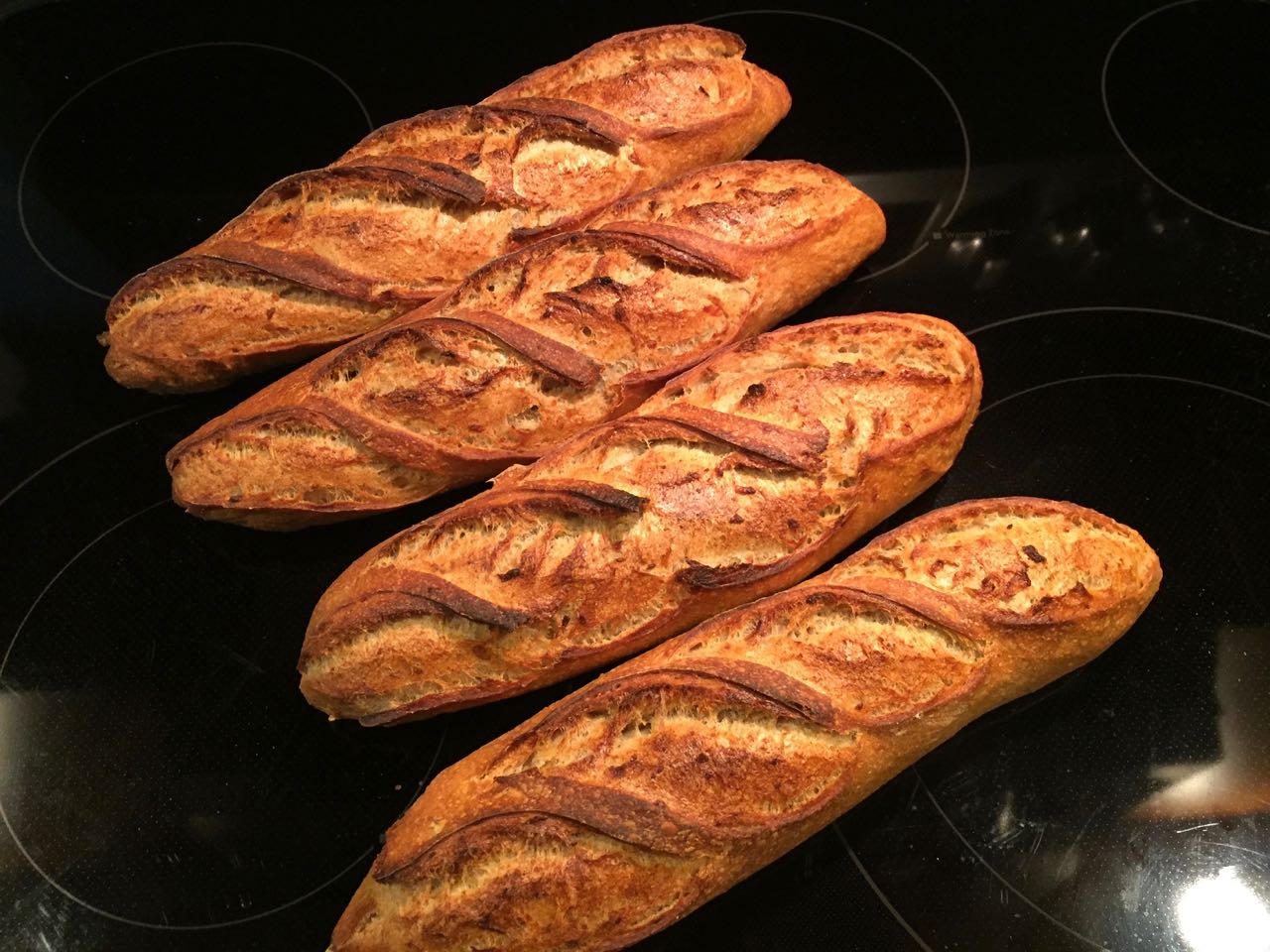 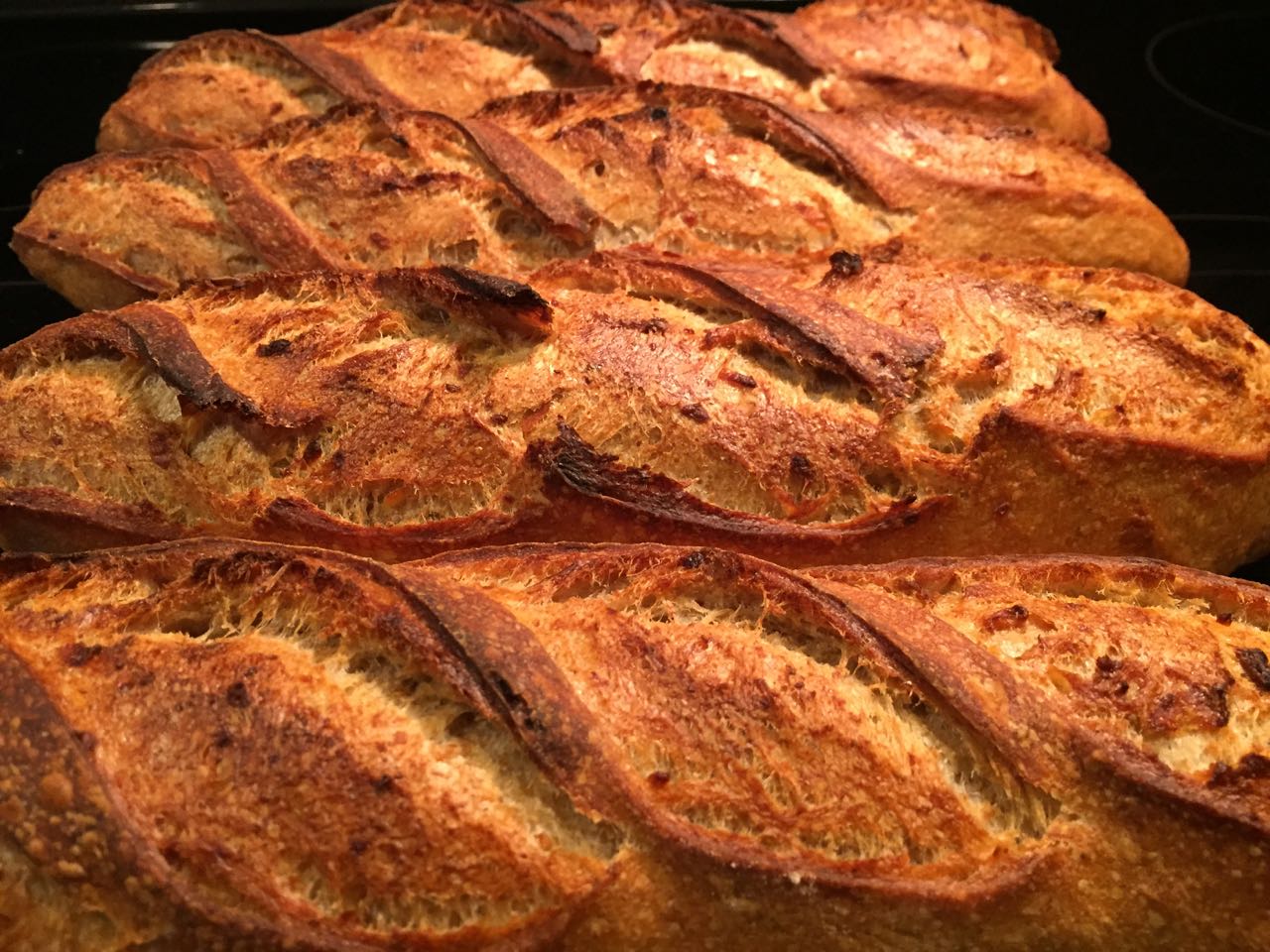 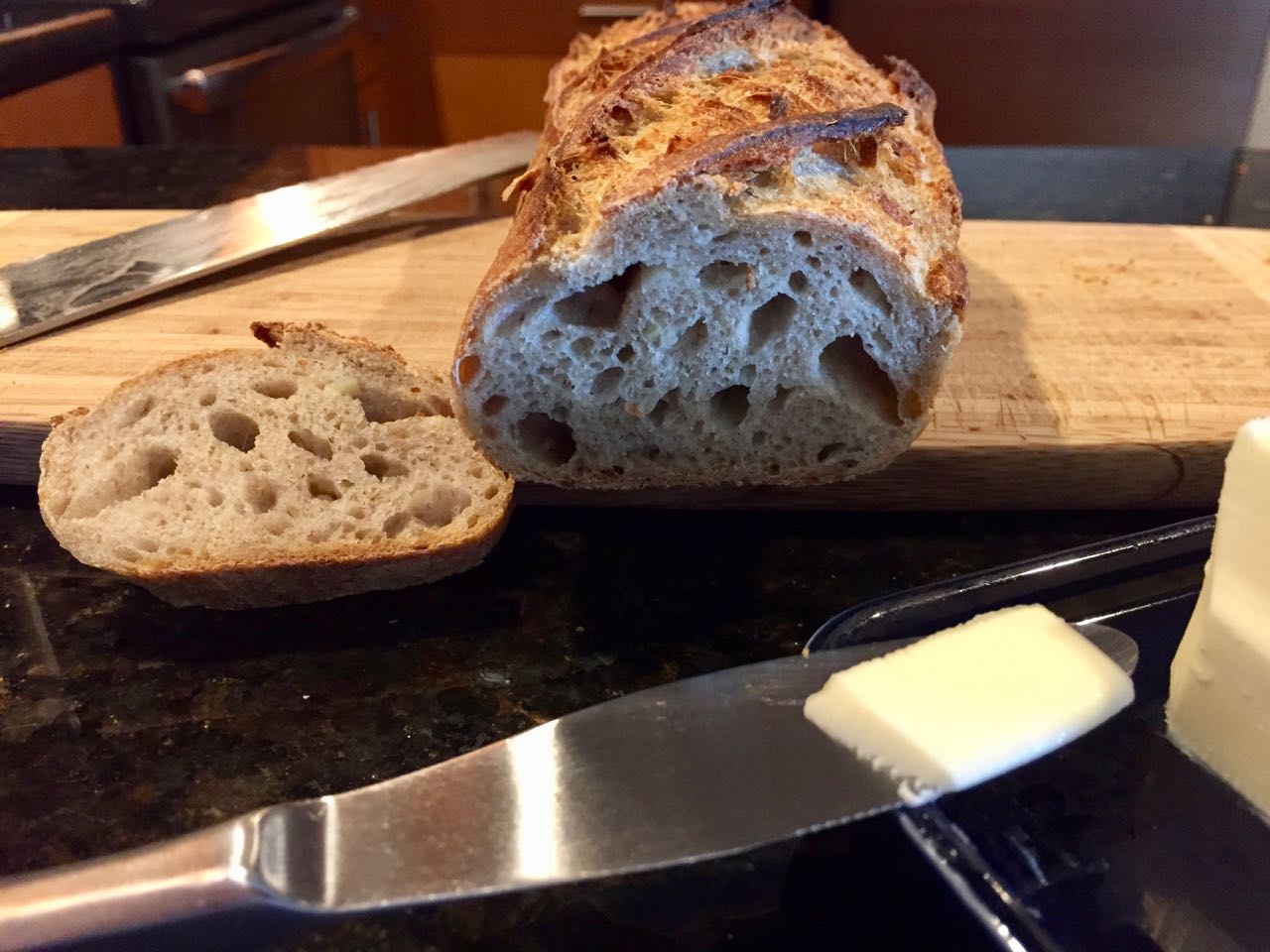 Can you taste them taters?

Why can’t I ask that without hearing Slingblade?

Is this a nod to The Guernsey....Potato Peel Pie Society?  Hey, COVID lockdowns are reportedly easier than the German Occupation.  My MIL who was growing up on Guernsey then says this is harder. Then, there were Germans all around but she could go anywhere (e.g., to the beach!). But now she says their own cops will arrest her for leaving her house!  Bugger them, she says. She’s got Maris Pipers and Jersey Royals to put in down at the allotment!

Woke up, it was a Guernsey morning, and the first thing that I knew
There was milk and toast and honey and a coupl'a of Maris Pipers.  Two
And starch poured from dem Joisey Royals and stuck to my upper dents
Oh, won't you stay indoors with me
We'll live another day of Covid-ninetee
And we'll talk in present nonsenses

These look fantastic, I'm going to have to give this recipe a shot soon.

had a potato taste, lost here.  This version with 15% WW and 15% rye seems to suppress that aspect.  So, if you want to have a more pronounced potato flavor, eliminate either the WW or the rye (or both).  From Mr. Hamelman's Bread, but converted from IDY to a levain.

Hi Alan they look very nice, i have been very pleased with the addition of different potato varieties to my breads of late i particularly like the addition of Rosemary as well. There is a Rosemary that  is called Gallipoli Rosemary  that has a very delicate fragrance that goes so well in the bread, which is of particular significance here as yesterday was Anzac day and that Rosemary was  supposed to have been bought back to Australia from Turkey and that bloody conflict. The  marches and big dawn services were not allowed this year but many people all around Australia assembled at the end of their driveways with candles prior to dawn to mark this very solemn occasion. it was very special with the kookaburras calling and many buglers  could be heard playing the last post in the still early morning air.  A fitting and somber tribute to the fallen. 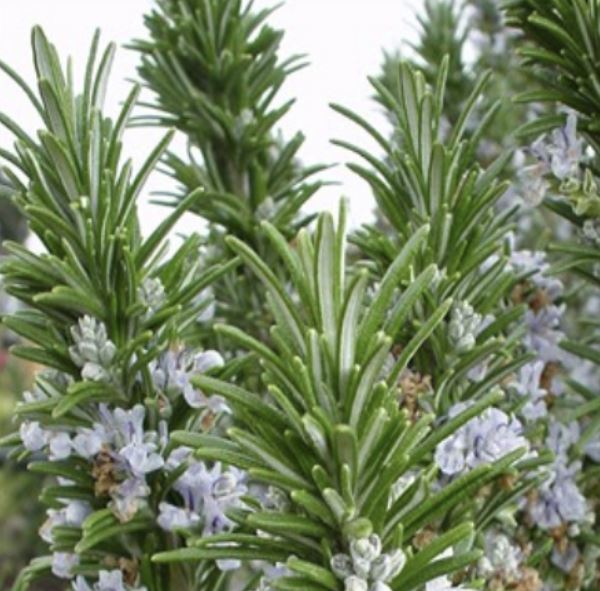 When we lived in California we had huge rosemary bushes, of which variety I know not, down our back steps and against our house.  I'd completely forgotten about adding some to the mix the other day.  Thanks for the reminder, I'll make a note of it on the formula sheet.

Aware of Anzac Day for quite some time, but unaware of the somber memories that is at the foundation of the annual recognition.  In 1995 I was in the Wiltshire area of the UK for some work and had the weekend to tool around, asked a few co-workers for some ideas.  I found my way to the Fovant Badges, the down where the Australian troops bivouacked prior to heading to France in 1916.  Your mention reminded me of them, although these were not the same troops who may have been headed for Gallipoli.  https://en.wikipedia.org/wiki/Fovant_Badges. 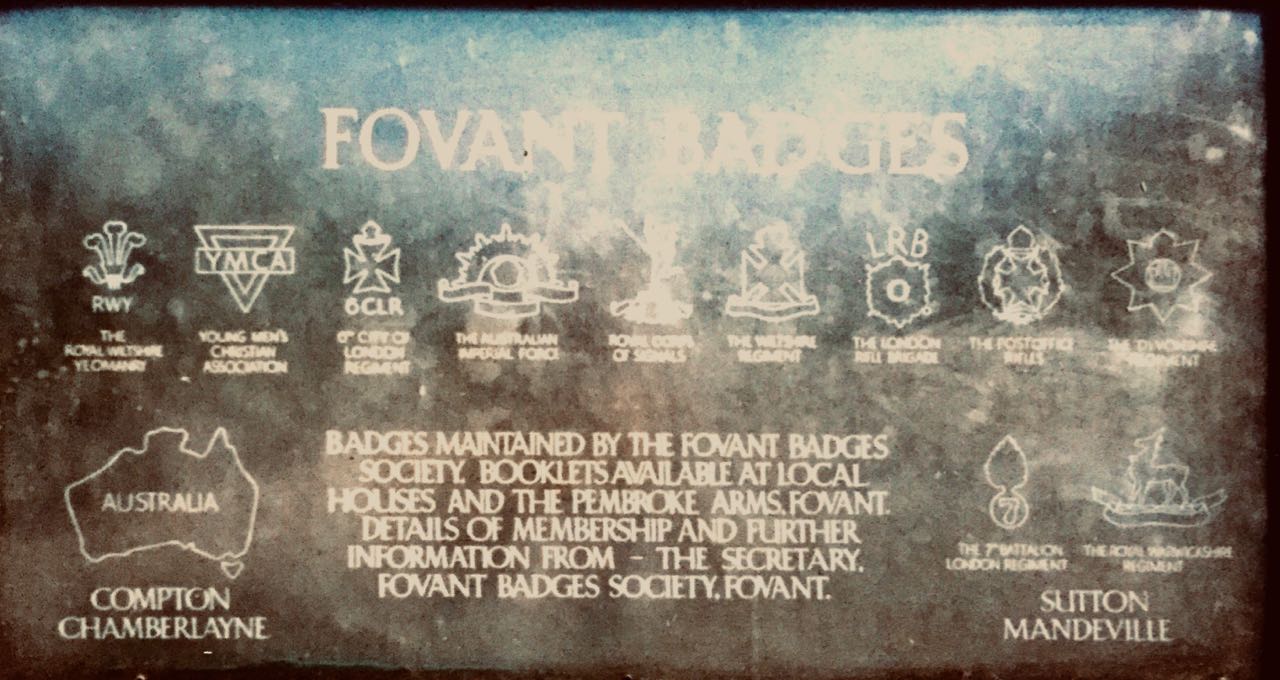 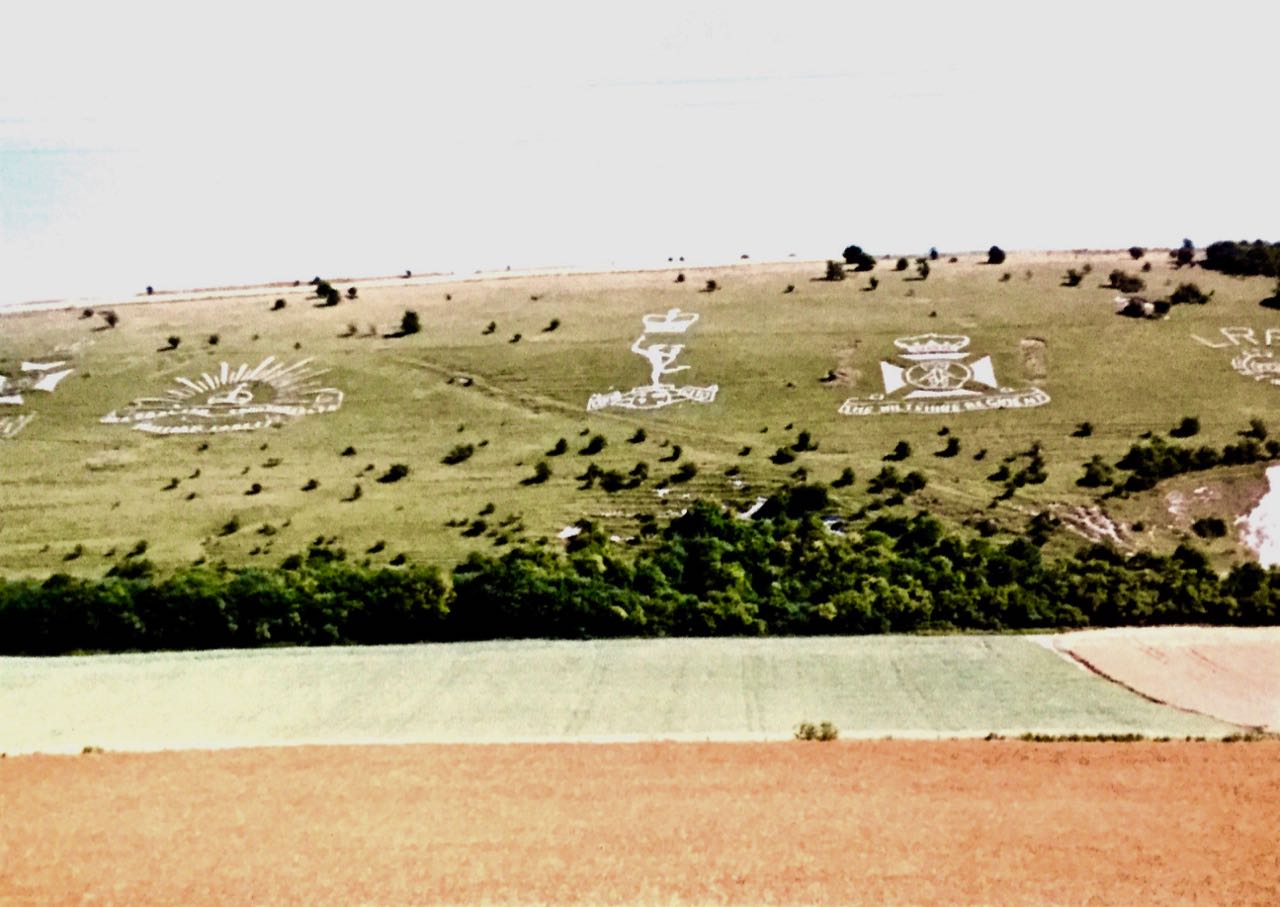