The legend of Donnie Baggs

The legend of Donnie Baggs 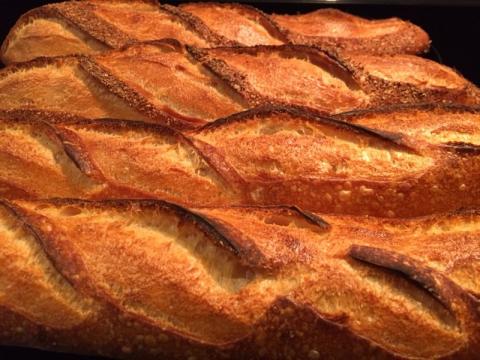 Today is my niece's birthday, and part of my "gift" is to send her the link to this blog entry.

Background  - years ago dabrownman christened me Donnie Baggs here on TFL.  I had written this at some point in response to one of his comments.  But decided to resurrect it here with updates.

I have lineage to a town in Sicily called Bagelone, just 25 km west of Logginsenda Messina as the cronut fries .  And I was christened Don Alfanso Bagelone by Patricio "Buns" Pattimeltini, a member of the local Muffinosa.  But everyone knew me as Donnie Baggs.

For the record I was raised by my Lievito Madre.  I was just a po’ boy.   But grew up to be a hero, feeling my oats.  While it may be true that my Popover was Big Tony di Ciabatt, he was more of a creampuff, liked to loaf around and it was easy enough to butter him up.  Durum those days, times were tough but fun, and I recall with fondant memories when my bro mated witte the bubbly but pale English Ali on the unbleached shores of Marsala.

We were often stretched as thin as a window pane and pinched for dough.  At first I thought about going straight, like my aunt Maize.  We always had an oven door policy at our house, and one day Buns, who at times could get hot and crossed, stopped in to ask if I wanted to make some real bread.  So I thought rye not?.  And pretty soon a lot was starting to hoppen and I barley had thyme for any bran new ventures, wheat all that I kneaded to do.

Poppy Tony di was not at all like Uncle “Leggs" Fougasse, who was crusty and hard as grisini.  I always looked up to and prefermented him to my own pate.  That is, until the day that he called me a floury little batard.  A poolish mistake.  I really didn't care if he was a biga shot or not.  Now he was just another crumby sour don't.  I didn't stand for that sheeter from anyone.  I had a short fuse back then.

I made few calls but couldn’t find my button man Rico Pugliese, who was raised in Como.  I refreshed my memory and recalled that we had a 3-stage plan to build-up to something like this.  But I couldn’t figure out wetter Rico was just playing me for more bread or wort else was going on with him.  Was he trying to ficelle me out?  No.  Naan times outta ten, he’s reliable.  A pita, really.  I wasn’t sure what to cake of this.  I was divided and didn’t know how the final shaping of my pan would work out.  I woulda spelt it all out to him, easy, as he’s a smart guy with a lot of couche-t and a self starter.

Nobody Pullmans my chain and so I decided to e-laminate Fougasse myself.  My typical M.O. was to whip out my lame and give some Paisano a close shave.  It was the yeast I would do.  His face woulda bloomed with a bloody grigne from ear to ear.  And you talk about scoring?  Then I thought about Mario Egwite, who’d get whipped into a pique over something like this.  He made sure that the yolk was never on him.  So instead I pulled out my gatt with the hollow ground bouletts from my lederhosen.  Leggs made a run for it, but I was able to peel off a few rounds, and in the mixer of the action one spiraled its way into his glutinous maximus.  I pumpernicked another in there too.  He was levain large until that moment, and just like 1:2:3 he French folded and dropped like an epi.

I was held on a Filone charge.  But that was dismissed as I already had all the fudges in the court system baked into my jellyroll.  That was my only close brioche with the law.  Any other stooge would have had to give up his 36 month autolyse on that new car, bake a run for it, and steam on outta town.  Not me!  It was proof positive that I had a formula that worked.   Still a bit unnerved I fell asleep on my living room couche that night, a baker's dozing, if you will.

Back then I had the swagger of a young Robert Miche-um.

So, yeah, keep your distance from Donnie Baggs.

Yesterday saw another bake of the marvelous Maurizio's levain baguettes. 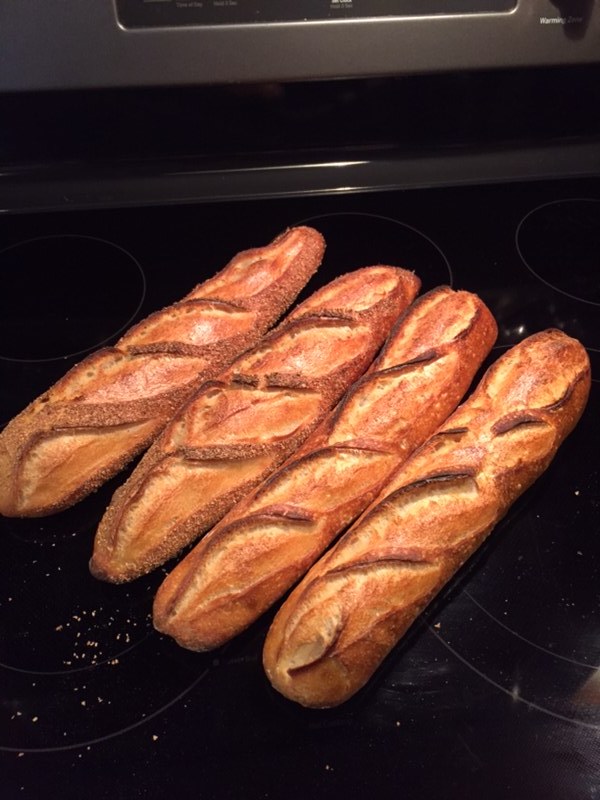 This is bloody brilliant Fonz.  Didn't know you had it in you.  You and Mini wear TFL's crowns of creativity.

I'll say something that was said to me once when I did some surprisingly (to the writer) creative: "Anybody who can do that should never have to work a day in his life".

I've been writing, usually, goofy crap for years, what I refer to as stream of unconsciousness writing, often never knowing where the next two sentences will lead.  But somehow, in my stegosaurus walnut-sized brain, they usually hold together with 2nd and 3rd pass editing.

Almost off topic.  I have a lifelong friend whose girlfriend's father was a painter.  Mike asked him his opinion on how to become a better writer.  He told Mike that the Mozarts and Picassos are so few and far between in the world.  Everyone else had to work consistently at their craft.  If Mike wanted to get better, he had to write every day.  I can't say that Mike got on the stick immediately, but we used to live together in the early 70s and I recall that Mike kept one of the Wilson-Jones type of daily diaries by his bedside and wrote in it virtually every day.  For years.  And I think that he still does.

My discipline starts and pretty much ends with brushing my teeth daily.  I could never have it in me to do what Mike has done.

In other obscure news.  My original schedule had me back in Lodi (Mike), SF and maybe Santa Cruz right now.  Cancelled, of course.

That had me for a minute, parsing it as "Login and Message" or something.

lover of the first Springfield album, before Jim ever was on the scene.  I also really like the first few Poco albums with him starting backwards with Deliverin'.

I don't tell no tales about no hot dusty roads.

Don't blame me, I'm only the piano player.

...at the intersection of Dave Barry, John Oliver and Tom Robbins.

Good place to be!

The best TFL post, funny and witty and the baguette of course are perfect Alan.

when my button man was sent up to Thunder Bay during the original posting.

Great way to start the day-great laugh! Thank you!

my wife would find me so amusing.  Well, sometimes she does.  At least I was able to make our dog laugh.  I think.  Although she never quite figured out irony...

and funny, but considering that TFL is a "family" website, as mild as it might be, I probably wasn't going there, even if I had thought of it first.

please sir, can we have somemore please :)

I have not been on the forum forever and had to get a bit of inspiration ... found it !

I thought that maybe you were skulled with a 2x4 and had amnesia or owed a bookie a ton o' dough (yuk) and were offed.  Seriously, you and your skillset have been missed around these parts.  Whenever someone gives me the jazz about "baguette king" or whatever, I remind them, and all of TFL (at least those who bother to read my drivel),  about you and a few other ace baguette bakers.

I hope that you aren't just stopping in for a cup of coffee, but plan on making TFL your home away from home again! Pretty please...

As for the absence - went through real rough patch after losing my main client. I went to some very dark places including coming just minutes from my house going up for public auction.  I was not a happy camper for a while.  But, things are getting back on track and kinda a new person now after weather out many horrible things.  You tend to not treat yourself very well in bad times - but on the end, it's kind if a magical thing when you learn to respect yourself.

I am still out of a functional oven save for the stove top but hope to resolve that soon.  So yes I'm looking forward to get back in the game.  Actually a buddy of mine started sending pics of his first bake attempts and I was energized to get back on here.

Hmmm sorry for all that downer stuff.  Important thing is that I'm a very happy dude now and so happy to see its par for the course on TFL.

look out newbs, al and G back to inflict some humiliation ! So good to hear from you alfanso ! G

Baking is very therapeutic, I know from my own experiences.  I have missed your presence here too.

Hi Leslie, good to hear from you.  Missed you all too.  Feel like I wanna do the Haka !