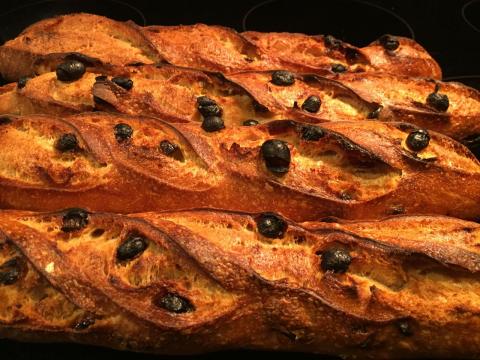 Too lazy to convert my 100% hydration to a Hamelman 125% hydration AP levain.  So I changed to formula to use my existing levain.  That was easier!

I was also too lazy to refresh it, so it came out of the refrigerator and was used as is, last refreshed at least a week ago.  I had enough so I just scaled it out first and let it assume room temp.  That was easier!

Then at a late moment's inspiration I decided to add golden raisins on the first Letter Fold.  This is a really good bread, with a nice crisp crust, and the addition of the raisins to give it a tasty sweet aspect.  At 20% WW and 5% rye, there is enough flavor here to remind me that I should have this bread on a more regular rotation. 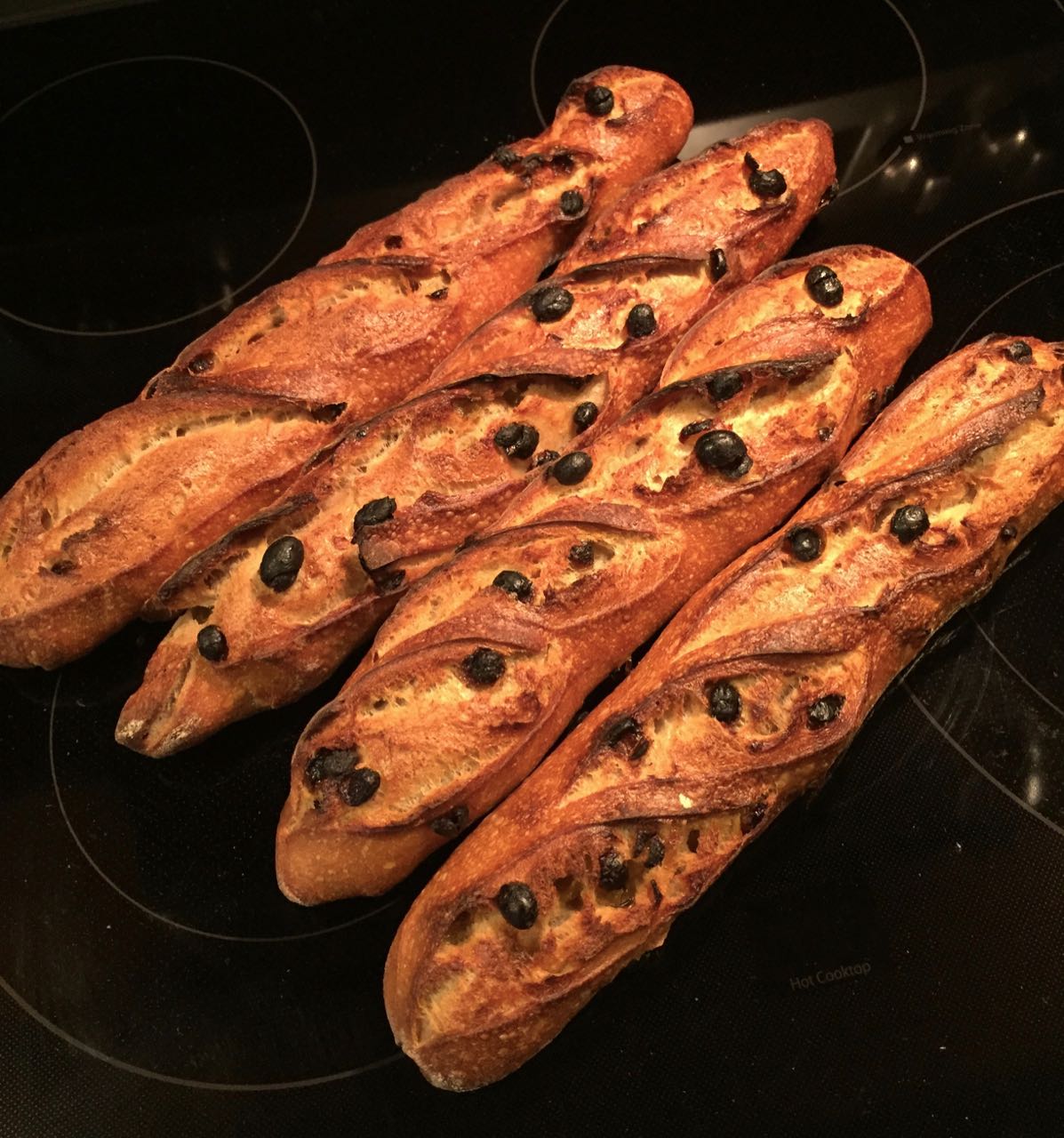 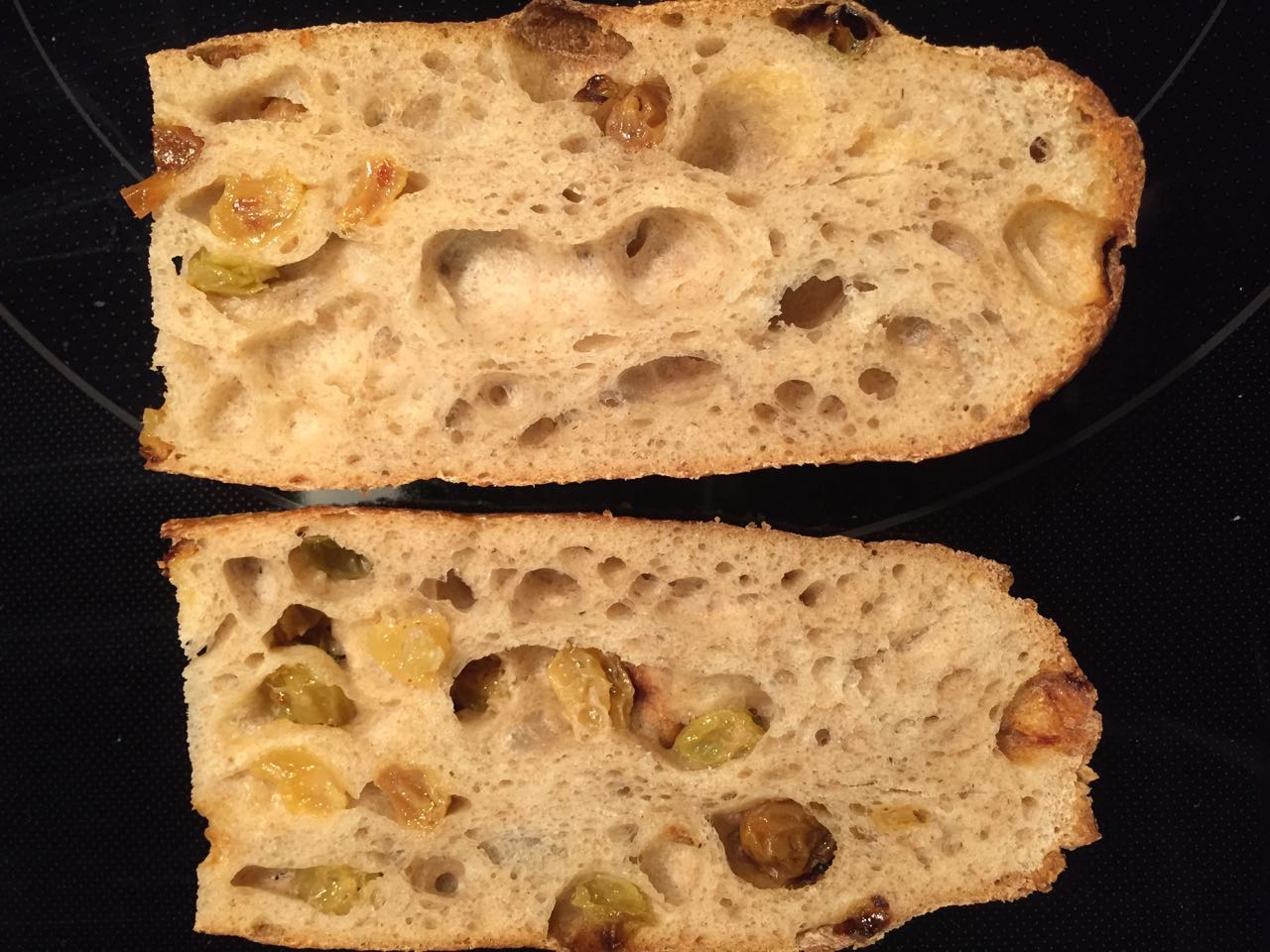 I'm impressed you manage to incorporate whole olives into your dough like that, especially with something as delicate to shape and score as baguettes. I just made some fougasse with chopped olives and still found the olives falling out everywhere, disrupting the shaping and creating irregular pockets in the final product.

which burn to a crisp on the exterior of the bread.  Crumb picture added.  For a 68% hydration dough with WW, this maintains a fairly open crumb even with the raisins added.

This is what olives look like on the exterior of a baguette.  Kalamatas cut in half... 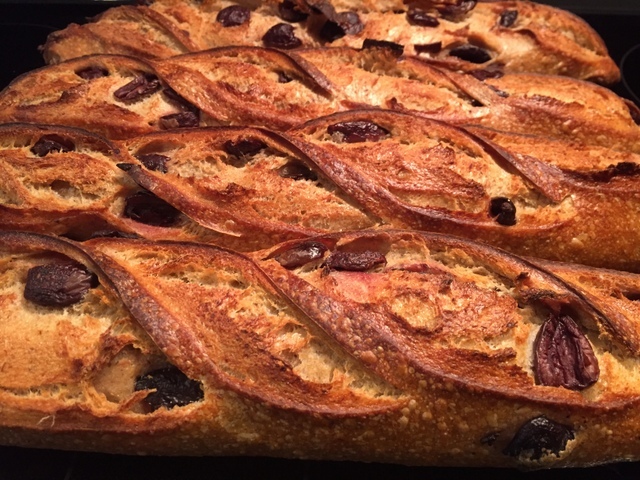 They look so perfect! How did the raisins managed to stay so plumped after baking?

I always soak the raisins for a time to rehydrate them, it doesn't take all that long.

Usually I use the water from soaking them as part of the hydration, but since I decided to add the raisins at a late moment, the dough was already well into the mixing stage.  The water isn't raisin yeast water, just plain water that the raisins soak in for just long enough to hydrate, and then are drained off.

Don’t mind me! Just getting my fix of your gorgeous loaves!

As to your method, good for you for doing things on the fly. I am also becoming so more relaxed over time about how I make bread. I think that it might be do to experience and knowing what the dough should look like. If it doesn’t, then it’s easy to figure out if it needs a bit of extra water, and extra fold or just some extra time for bulk.
Thank you for posting! Made my eyes happy!

I'm usually by the book when it comes to order of things, so this seat of the pants addition of the raisins was a bit unusual for me.  OTOH, my levain methodology is pretty loose.  I just refreshed this 100% hydration levain post-bake after it sitting unused, unloved, but not forgotten for about 2 weeks according to my levain refresh sheet. No refresh prior to mix.  Same with my 75% mixed flour levain, which I don't use much anymore.  The schedule says that I last refreshed it ~3months ago, but it survives beautifully and the refresh came out just dandy on that one too.