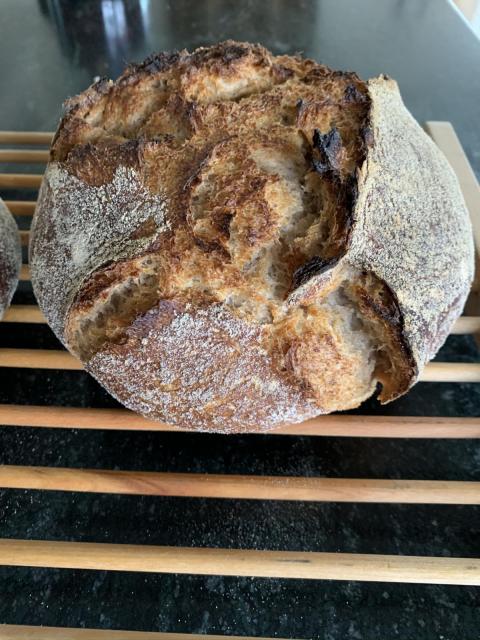 While I have Ken Forkish's Flour, Water, Salt, Yeast, I don’t often bake from it. I'll admit to being put off by some of his notions but that doesn’t mean I should deprive myself of good bread.  So, I decided to have another look when I needed to bake a couple of weekends ago.

After poring through the recipes, I settled on the Overnight Country Brown.  It was appetizing and I had the time to devote to it.  But, before launching, I had a very thorough read to see what Mr. Forkish says about temperatures.  After seeing repeated mentions of room temperature, I found his definition buried deep in a discussion about desired dough temperature.  According to Mr. Forkish, room temperature is 71F.  That explains why there are so many frustrated FWSY bakers, most of whom probably expect room temperature to be in the mid-70s.

Since my kitchen temperature during Kansas winters is typically in the 67-69F range, I felt I had a decent shot at using the formula's timings without over-fermenting the dough.

My first departure from the formula was to make 250g of levain, not the full kilogram that Ken calls for.  The final dough only requires 218g.  Remember me mentioning that some of his notions are rather off-putting?  Making and discarding massively excessive quantities of levain is one of those.

The levain was eventually ready a little after 5:00, so that was when I assembled the final dough; almost exactly as instructed.  The deviations were an additional 50g each of freshly milled barley and rye flour, along with 50g of flax meal; hence the “+” in the title of the post.  I backed down the amount of bread flour by an equivalent amount to keep the hydration in balance.

After mixing in the salt, the dough was treated to four or five minutes of slap and folds until I could see that the gluten was moderately developed.  It was rested for 30 minutes and then given a round of stretch and folds in the bowl.  After three additional rounds of stretch and folds, each at 30-minute intervals, the dough had plenty of body even though it was still quite sticky.

The dough was left to ferment for 15 hours.  At the end of bulk fermentation, the dough was absolutely beautiful.  It was 2.5 to 3 times its original volume, silky, and still sticky.

I elected to divide the dough into two loaves.  Each was shaped into a tight boule and deposited, seam side down, into bannetons that were liberally coated with rice flour.

While the loaves fermented (slowly), I prepped the oven for baking by placing a baking stone on the center shelf and a steam pan on the lower shelf.  While I salute those who use Dutch ovens, I am more comfortable working without them.  Based on what came out of the oven, my final deviation from Mr. Forkish's instructions was quite successful. 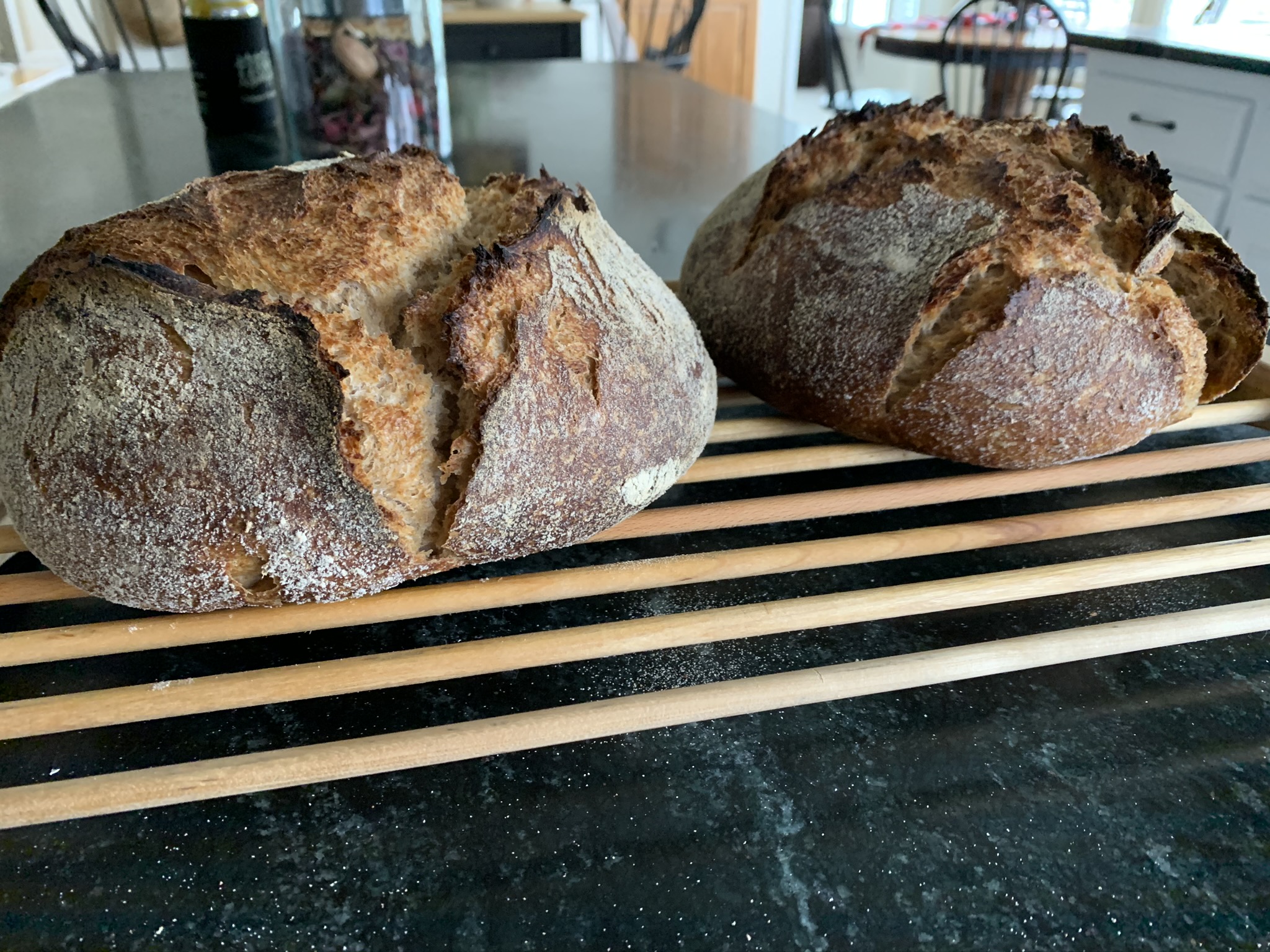 The seams opened up to allow plenty of oven spring.  There was some fissuring along the sides of the loaves but not enough to cause problems. 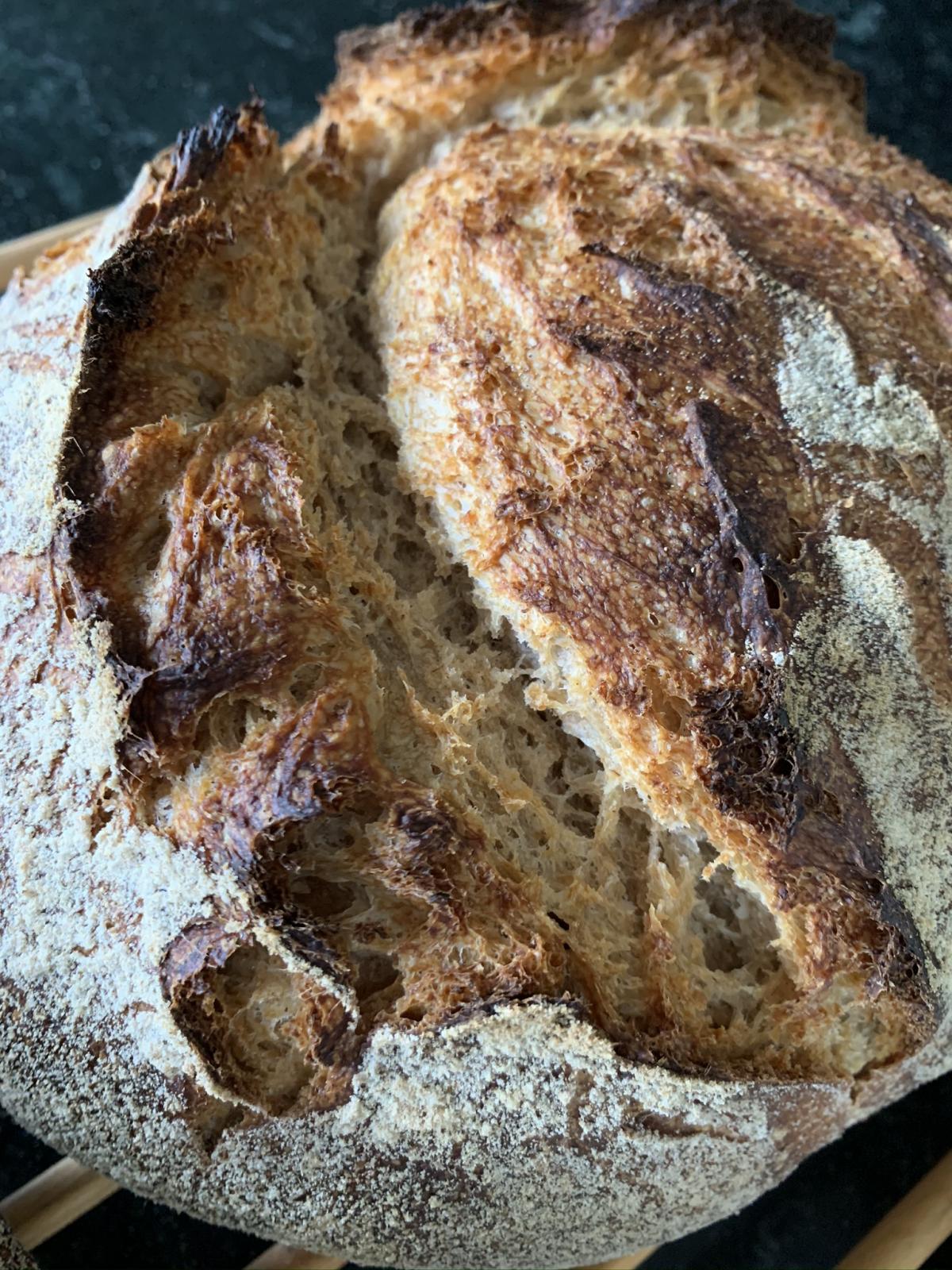 While the loaves felt light for their size, the crumb was only moderately open and fairly even in texture.  This might be the result of the slap and folds after the initial mix.  In any event, the crumb was perfect for the bread's intended purpose: sandwiches.  It also worked well as toast. 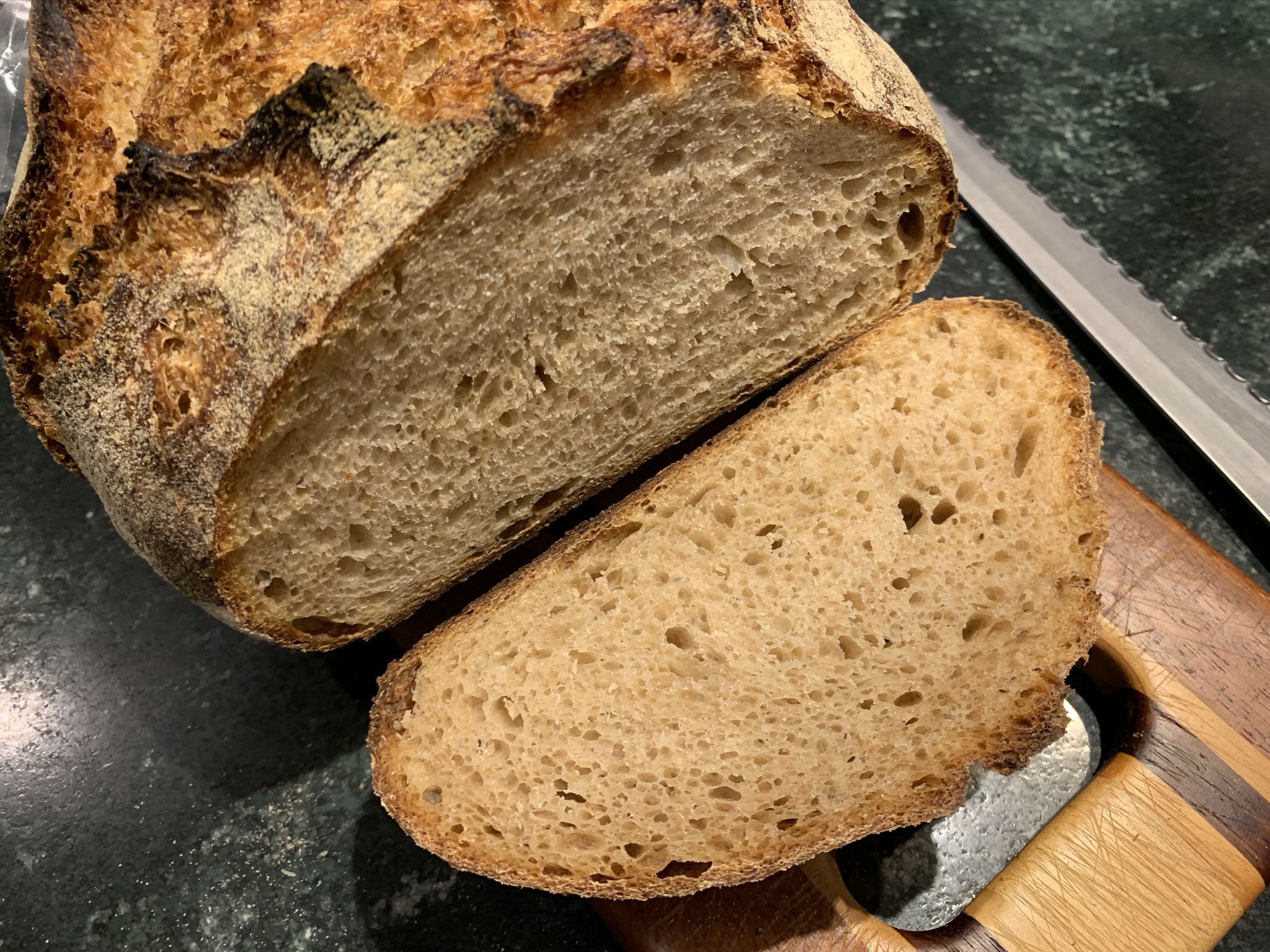 The bread's flavor was outstanding.  Lots of roasted nuts and caramel notes from the crust, with the crumb contributing a creamy blend of grains and mild acidity.  It was thoroughly enjoyable.

This is definitely worth a repeat, although it may be more of a challenge when things move faster in warmer temperatures.

especially with barley and rye switchouts.

Impressed and inspired....maybe go mix up a cold Forkish myself now.  :)

Beautiful loaves Paul.  I don’t own a copy of FWSY but did borrow it from the library and read through it months ago.  I too found, especially as a new baker some of his ideas off putting including the instructions for making sure large amounts of levain.