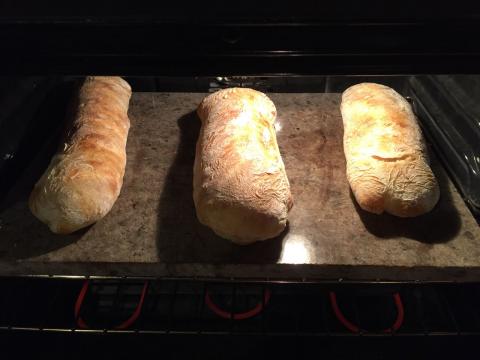 On the levain feeding side of life: My 100% hydration AP levain was last fed on 08 Dec.  After two feedings yesterday, 07 Jan, it was quite happy again.  Posting these last two sentences to disseminate the knowledge that a well developed 100% AP levain in the back of the refrigerator can sustain a full month, at the least, without being fed, and spring back to life in a pair of feedings.

Our friend, who'd sampled a fair amount of my breads before, was joining us for lunch yesterday.  But she'd never had my ciabatta.

Yes, I've posted this before, as both an AP Biga and AP levain, as well as a levain tritordeum version.  This mod is minor, but brings me back to the more basic FWS combo.  A place where I most prefer to reside.  Mr. MeGee’s version uses olive oil, and in that regard I’d been true - until now. Here it is simply a levain FWS bread with a very minor boost of IDY, y nada más.

My feeling was that the olive oil was coating the gluten strands making then slick and therefore might be inhibiting their structural growth, and also causing a minor increase in mixing time which, with an old KA dough hook mixer, is too long to begin with.

Once more, here is the formula at 1500g.  I removed the olive oil and added that amount to the bassinge and the hydration is now 79%. 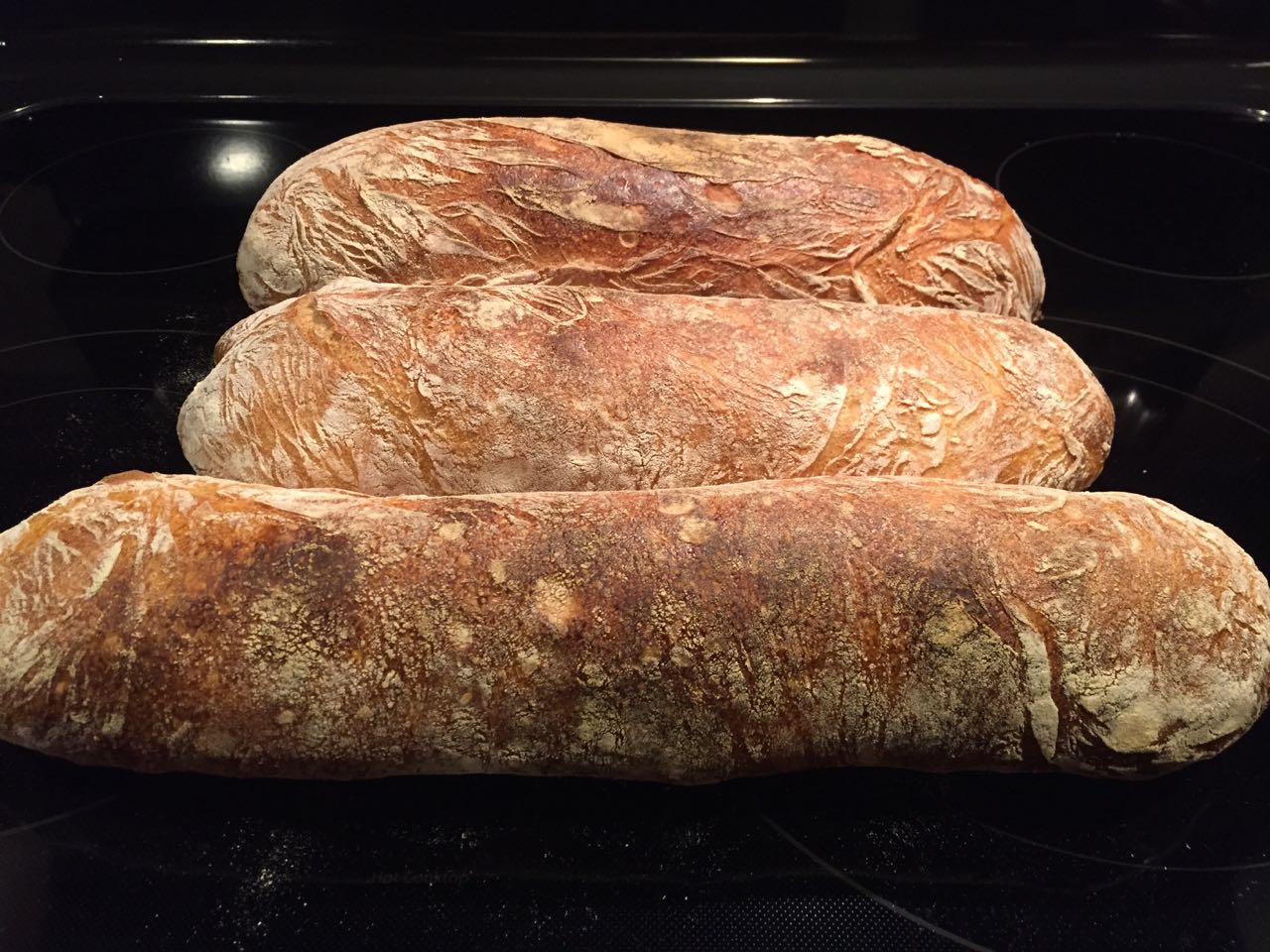 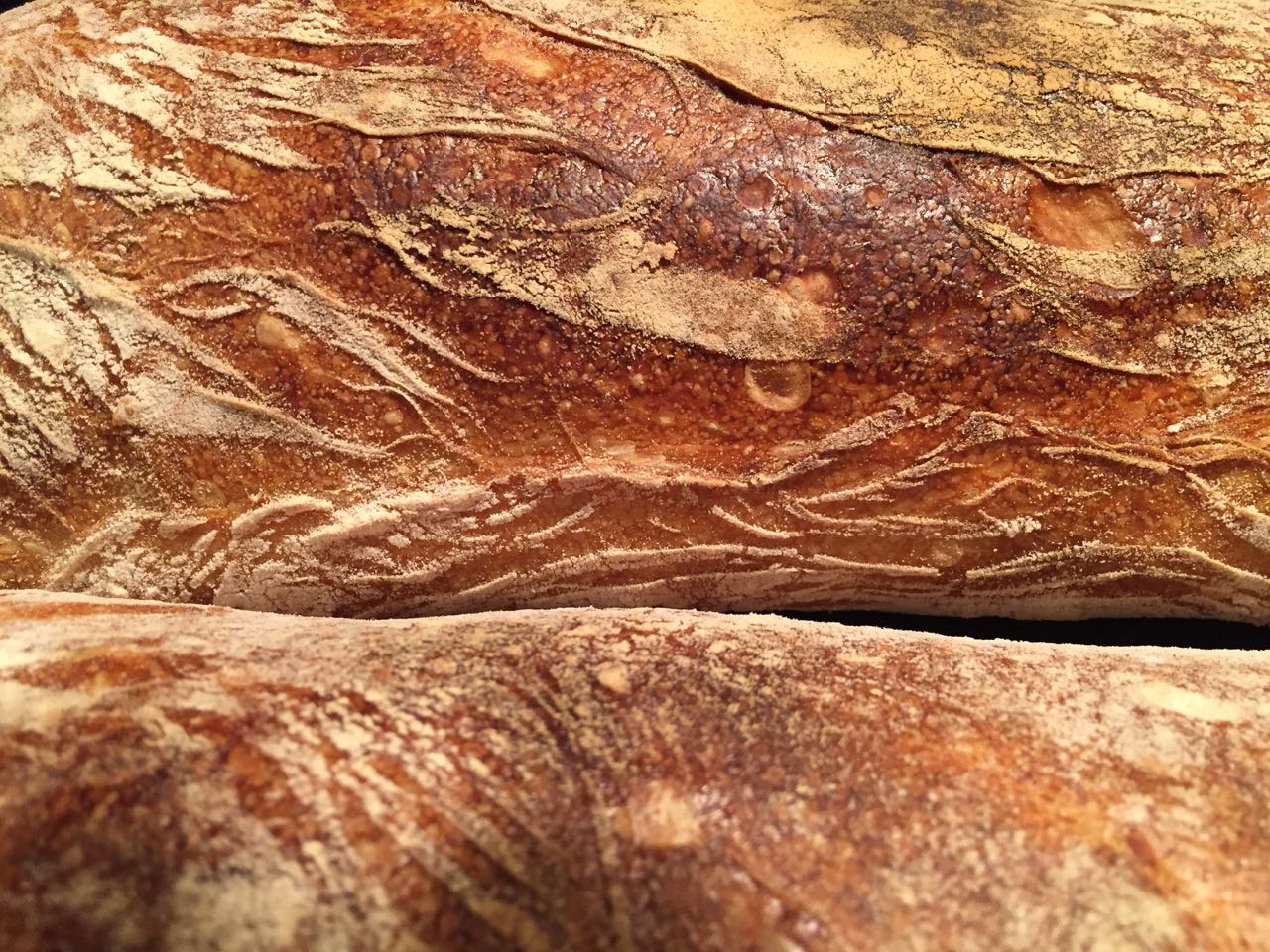 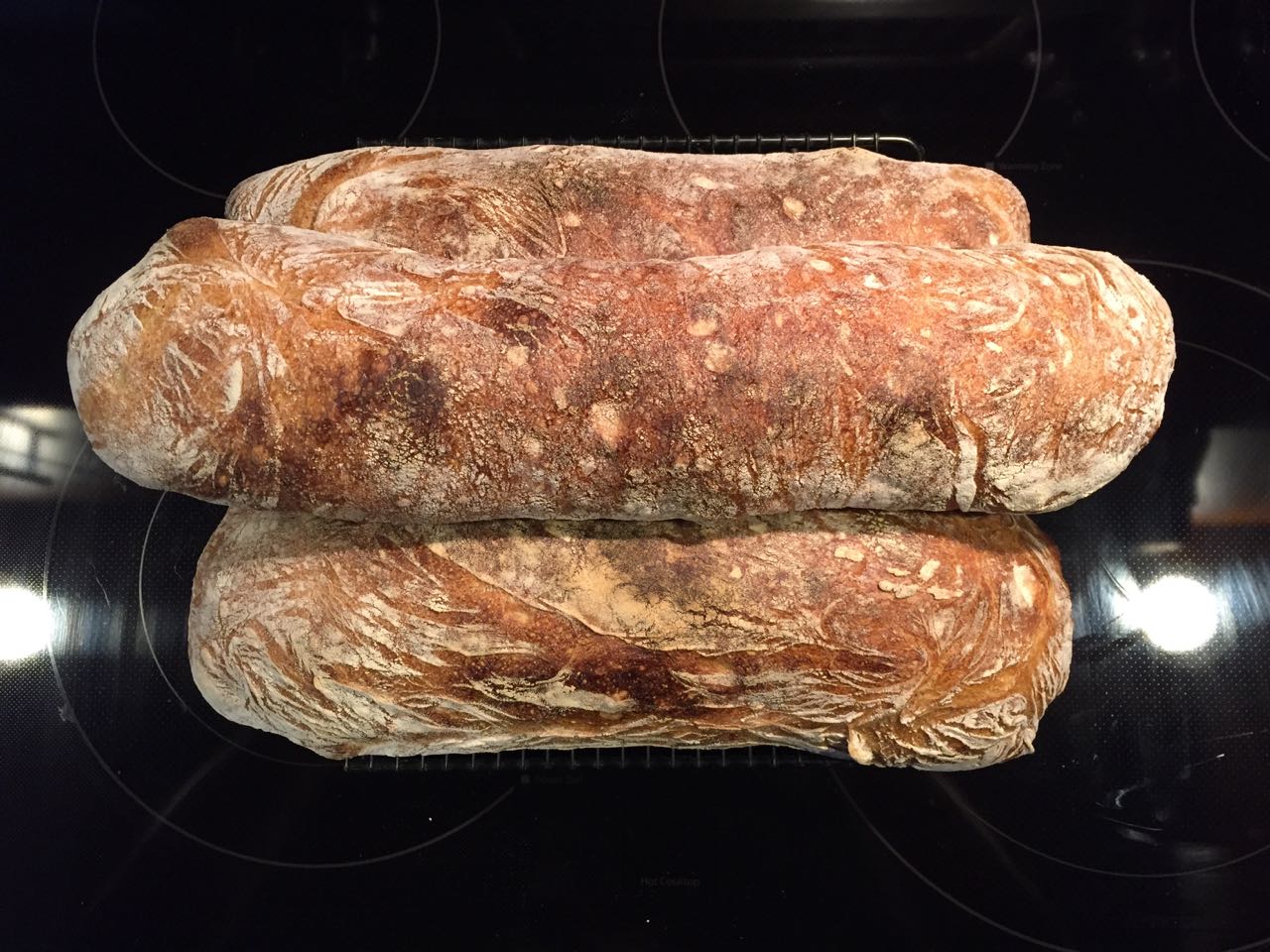 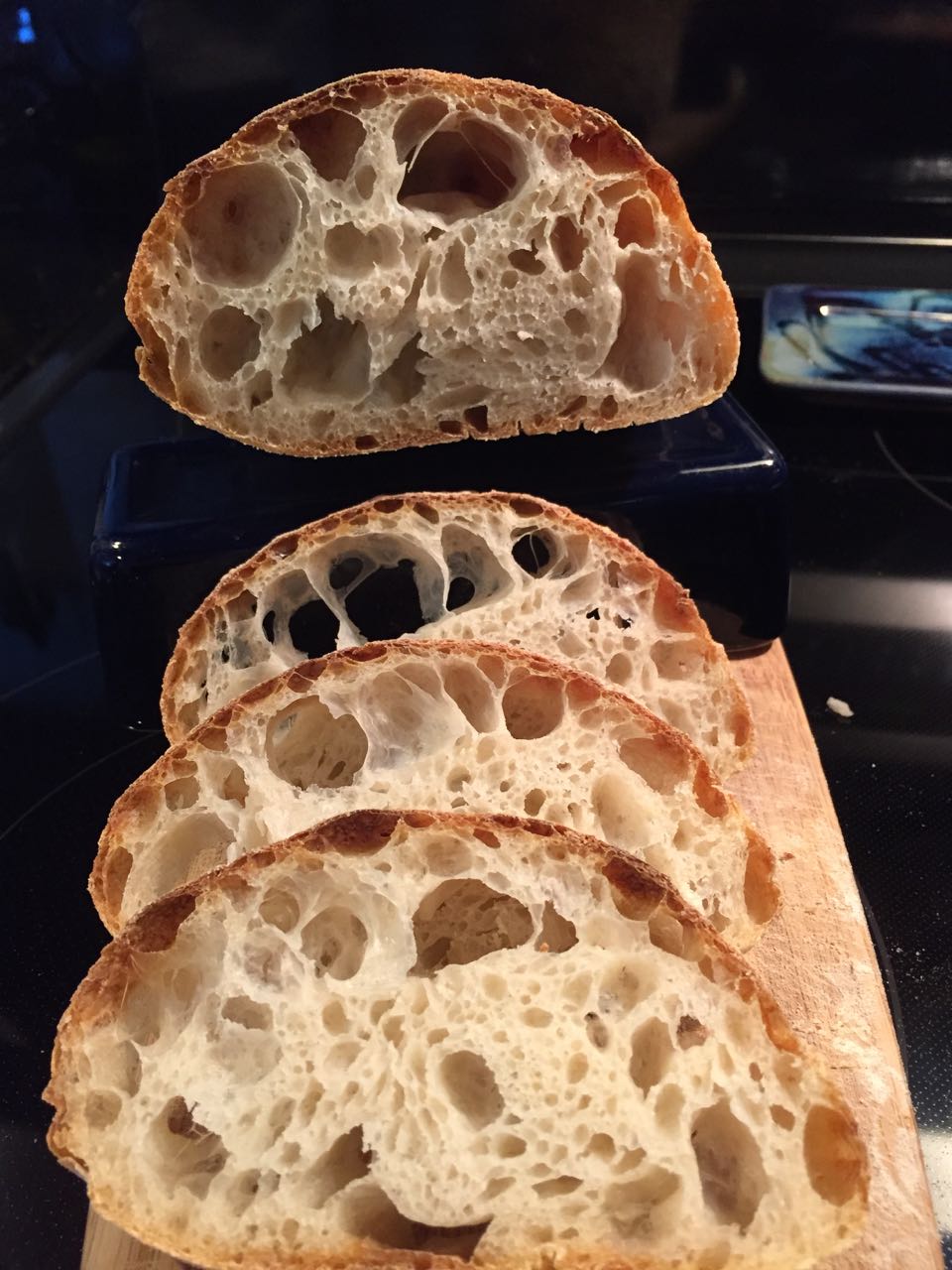 Ciabatta (along with focaccia) constitutes a large part of my white bread affair. That gelatinized, spongy texture is only achievable with white flour.

I wonder if you noticed any difference in texture after removing the oil. Recently I baked a 75% hydration white loaf with 10% basil pesto. Its crust was significantly crispier and the crumb felt much lighter. Personally I found it too soft and airy. What can I say, the fat did its job too well tenderizing the crumb :)  Did your oil-free ciabatta come out chewier than the 3% olive oil version?

If you look at the tritordeum post, you will see that the tritordeum "T65" version is a fairly similar grain as far as ciabatta goes.  It handles shapes and opens as does and AP flour dough.  To review, tritordeum is a recently developed European grain, still only available in a limited set of EU countries as of 2019.  It is a hybrid grain cross-bred from semolina and barley.  Unfortunately for you, and me and others who may have an interest, it is far from universally available, and even a task to find in larger markets in Europe.  Still.

To a fair extent, I'm not good with ID'ing flavor notes and other differences unless I can compare two differing bakes side by side.  Hard to do as a home baker.  However, your point is well taken in that the crust may not have been as crisp as with the olive oil added.  But it was still crispy the first day, and with subsequent reheating or toasting, the entire beast was rendered delicious and crispy.

This batch of ciabatta reminded me of the glass bread that became a thing on TFL a while back.   I'm preparing for my second pa de vide (glass bread)  bake.  So, with all of my preening and jawboning about sticking to just FWS, I'll be back to adding olive oil IDY and sugar on this next bake.

thanks for the kind words,

Looks excellent. I love the crumb and crust! Im sure it was delicious!

so I have no issues when the bread hits day 2 or 3 or 4!  Yes, the bread was delicious.  I sent a loaf home with our lunch guest for her friend.   Apparently both gals loved it too.

Love the thin walls of the crumb!

And I agree that the walls of both the crust as well as the crumb are thin and begging to be eaten.

Now all I want is some aged cheese, some softened butter, a nice glass or two of Chianti Classico Reserva, some bruschetta mix, olive oil mixed with balsamic for a glaze with several kinds of olives of different colors, maybe a few slices of apple or pear and perhaps an almond cookie.   I'm pretty sure that is what the inner Italian in me would want with this bread - the inner Retired Laziness might have something to do with this simple fare but sometimes the simple is the elegant solution to being hungry.

what happened to the figs, the dancing girls and the strolling musicians.  Not to mention the Treasure Bath.