At my wife and son's behest, I made some sourdough croissants today. Well, I say today, but I started making them two days ago... I followed the recipe posted by Elien on her Home Grown Happiness blog here:

Very pleased with how they turned out - far from perfect, but they have an authentic taste and texture (and I say this as someone who spent some time living in France with a very good baker at the end of my street). 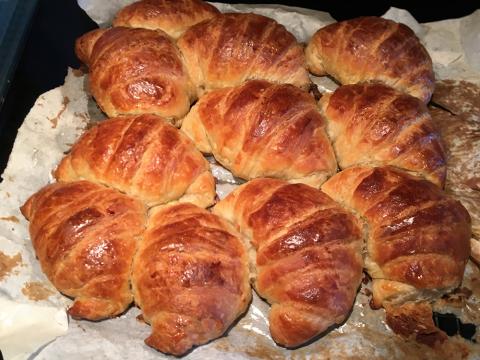 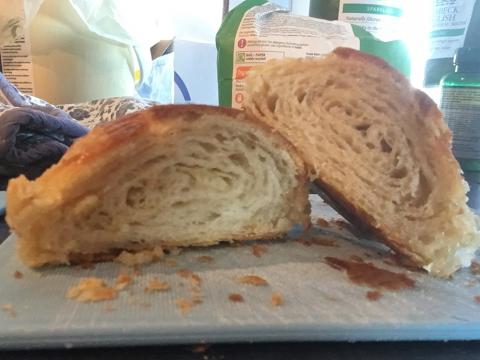 Lamination-wise, the one I took a picture of wasn't even the best of the bunch.

Some observations on the process/notes to self for improvement next time:

1. When making the dough, make sure the butter is properly softened before incorporating it into the flour. And really work it in. When I took the dough out of the fridge after its overnight resting, there were noticeable chunks of butter dispersed throughout.

2. Don't let the dough overproof. I left it out too long before putting it into the fridge and it had risen a lot more than ideal. I think this might be the reason why the dough was very sticky and hard to work with. Or one of the reasons. I needed to dust with a lot of flour when rolling and cutting the dough to prevent it sticking to my work surface and rolling pin.

3. Allow a lot more space when placing the rolled croissants on the tray. They expand a fair bit during cooking. To be honest, I hadn't intended to place them so close together on the tray, but after rolling them, I placed them on a sheet of baking paper and they stuck to it. I didn't dare try to tear them away before baking so just put the whole sheet onto the baking tray as it was. This meant some of them ended up with scraps of baking paper glued to the bottom. I guess should have dusted the paper with flour or semolina.

4. Don't forget the egg wash! I did, until a couple of minutes after I'd put them in the oven. I took them out and added the wash, but I probably shouldn't have bothered by that stage.

5. Check the temperature. The recipe says to cook them at 200ºC but I think perhaps I'll go hotter next time. I think they need a higher initial burst of heat to get the rise before the butter melts. I may be wrong. They also took more like 30-35 minutes to cook, rather than the 20-25 minutes stated in the recipe.

One thing that really pleased me was how little butter leakage there was during baking. I was expecting a lot of leakage so used the deepest baking tray I have, but I needn't have worried. Surprising, given how badly I'd incorporated the butter into the dough in the first stage.

Community Bake - Baguettes by Alfanso
I think I goofed up
Formulas for basic white bread using Tangzhong? (...
Heads up and an apology in advance
Salzburger Grain Mill Max 2020 - Just got it (USA...
END_OF_DOCUMENT_TOKEN_TO_BE_REPLACED