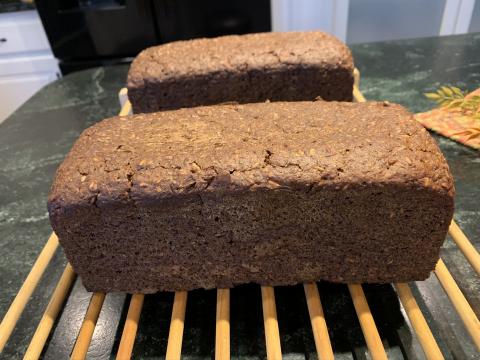 Some things are worth repeating.  Horst Bandel's Black Pumpernickel from Jeffrey Hamelman’s Bread is solidly in that camp.

We had arranged dinner with friends who will move away soon. During that conversation, I offered to make a bread for them as a going away gift.  Since they enjoy dark, hearty breads, I knew a rye bread was in order.  It took a while to peruse various recipes in several books but Bandel's pumpernickel kept drawing me back.

This is a bread with a lot of moving parts.  Rye berries are soaked overnight and then boiled.  There’s an old bread soaker.  Rye meal forms the basis for a rye levain.  And if that isn't enough rye, there's also cracked rye in the final dough.

Before making the bread, I dug back through the TFL archives.  One of the most important finds was Andy's (ananda's) advice that the final dough should be about 85% hydration.  Hamelman is uncharacteristically vague about the water content of this bread, so that was a helpful data point.

The other iffy part of the instructions for this bread is the baking profile.  Hamelman baked this bread in the dying heat of a commercial oven in his bakery.  There really isn’t a way to replicate those conditions in a home oven.  More about that later.

This past Friday evening, I began by milling the rye meal and the cracked rye with my Komo Fidibus grain mill.  My starter was already primed for action after two refreshments, so it was mixed with the rye meal and water and left to work overnight.  The altus was combined with warm water to form a soaker.  Finally, the rye berries were covered with water.

On Saturday morning, the rye berries were boiled for an hour, then drained and cooled.  I also wrung as much water as possible from the altus soaker.  After that, it was time to put everything together.  There was just one small concern: the retained water in the rye berries and the altus pushed the overall dough hydration to 97%.

Since I was making two loaves (hey, I like it too!), I used my 7-quart KitchenAid mixer.  While it had enough power to handle the load, the extra water in the dough made it very sticky and caused it to cling to the sides of the bowl.  In effect, it received more of a massage than mixing.  I found it necessary to use a spatula repeatedly to shift the dough back toward the center of the bowl where the dough hook could grab it.  Even so, I found some dry flour in the bottom of the bowl at the end of mixing and had to work that in manually.

After the short bulk fermentation, the loaves were shaped and placed in Pullman pans.  When the top of the loaves were nearing the top of the pans, lids were put in place and the pans deposited in the preheated oven.  Because the dough was wetter than recommended, I chose to not seal the pan lids with foil.  I wanted that extra water to bake off.

The baking profile I adopted was an educated guess.  The first hour was spent at 375F, per Hamelman's recommendation.  The second hour was at 325F, the third hour at 275F, and the next five hours at 225F.  Then the oven was switched off at about 10:00 p.m., with the bread remaining in the oven for the rest of the night.

The pans were still slightly warm when I took them from the oven at about 7:30 Sunday morning.  Upon opening the pans, I found that the loaves had pulled away from the pan walls, slightly.  There was quite a bit of condensation on the inside of the lids and the pan walls.  Since I wanted to drive off some of the water, that was a welcome sight.  The crust was quite firm but not rock hard as happened with one of my earlier bakes.  I placed the loaves in plastic bags immediately after removing them from the pans.  The risk was that too much moisture would be retained.  The reward was that the crusts would soften.

It was Wednesday before I cut into one of the loaves.  It is very moist and gums up the knife blade but fully baked.

The flavor and fragrance are marvelous.  That long slow bake converts some of the starches to sugars and then caramelizes those sugars.  In the process, the grayish dough turns a deep mahogany brown; not quite black but close enough.  The crumb is barely aerated and packed with chewy, plump rye berries.  This is seriously good bread. 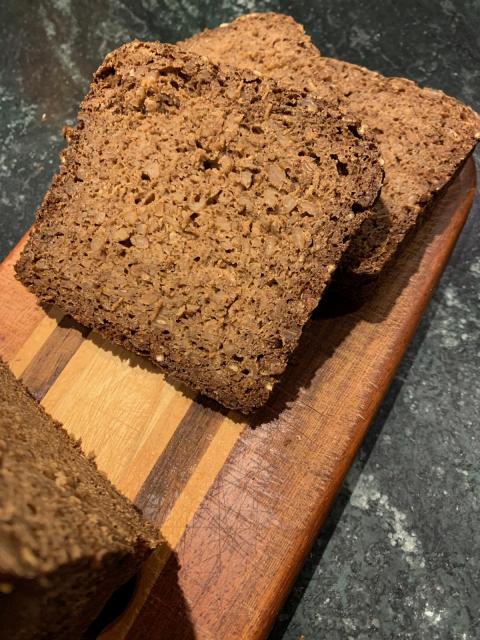 I haven't made thus style in a while.  I do remember it can easily turn into a brick so it look s like you nailed it.

Your friends must have been happy to receive such a delicious going away present. 😋

And so was I.  This was a brick in the best kind of way.

And the flavor is even better.  Layer on layer of rich dark notes to savor.

We still make this as an occasional for our Farmers' Markets Paul, and I still love this bread.

Interestingly, it's one bread which does not freeze at all well!

Hope all is good with you