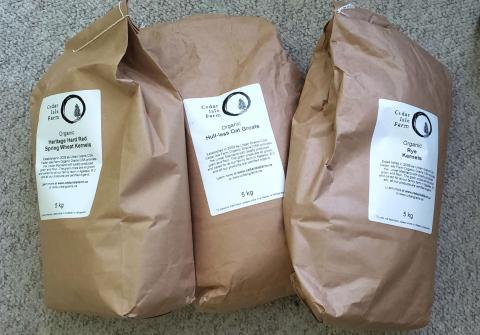 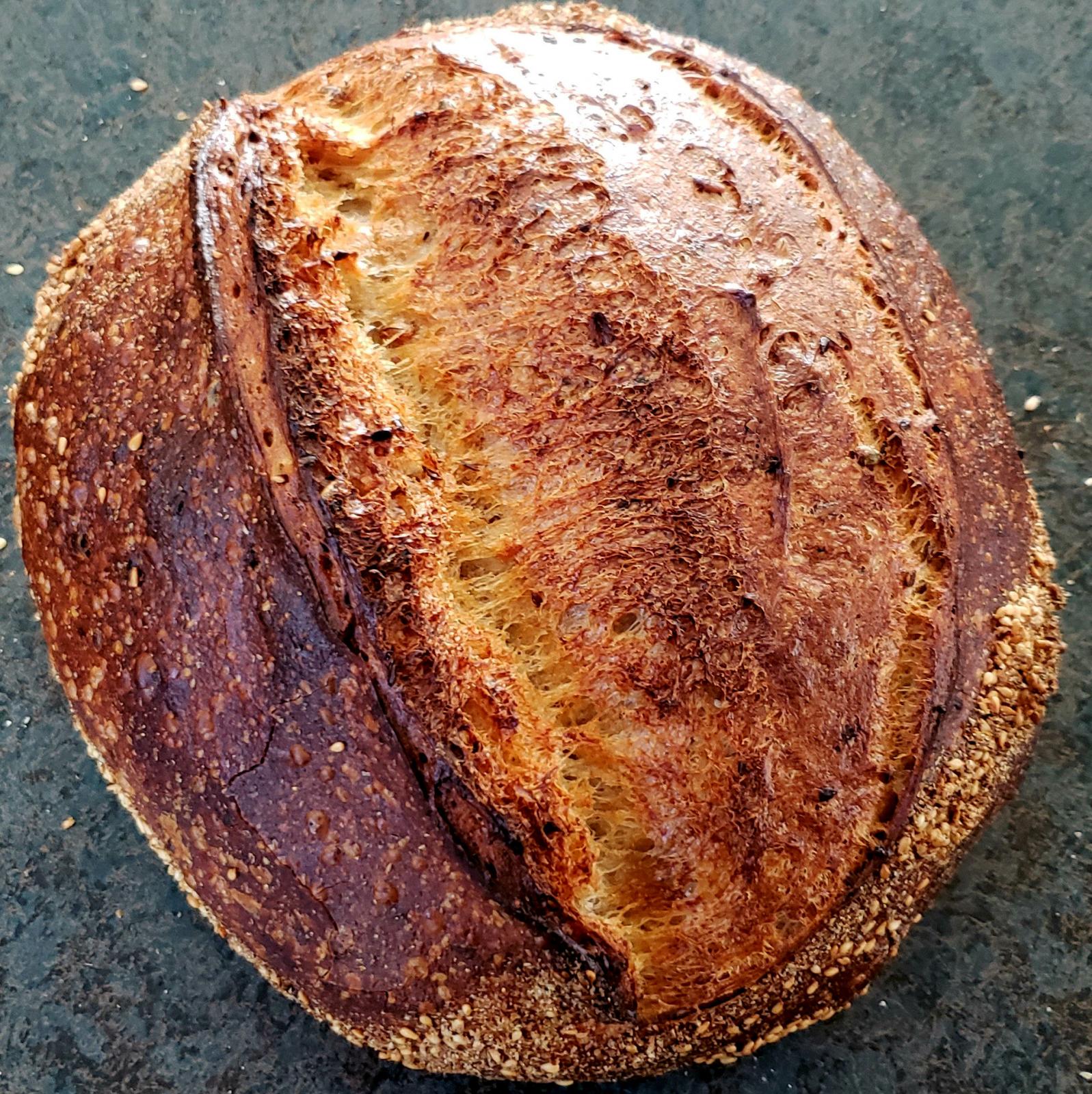 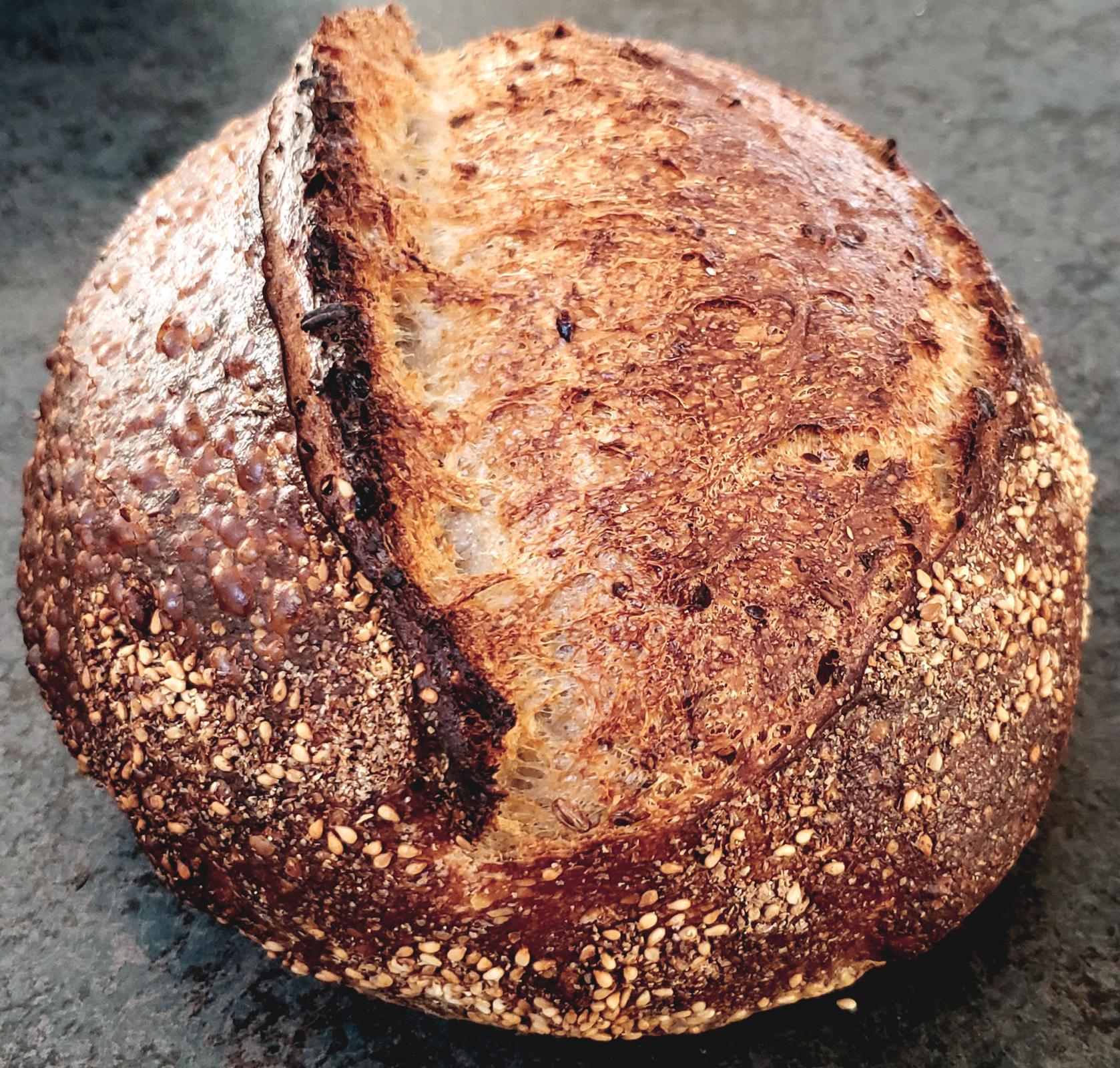 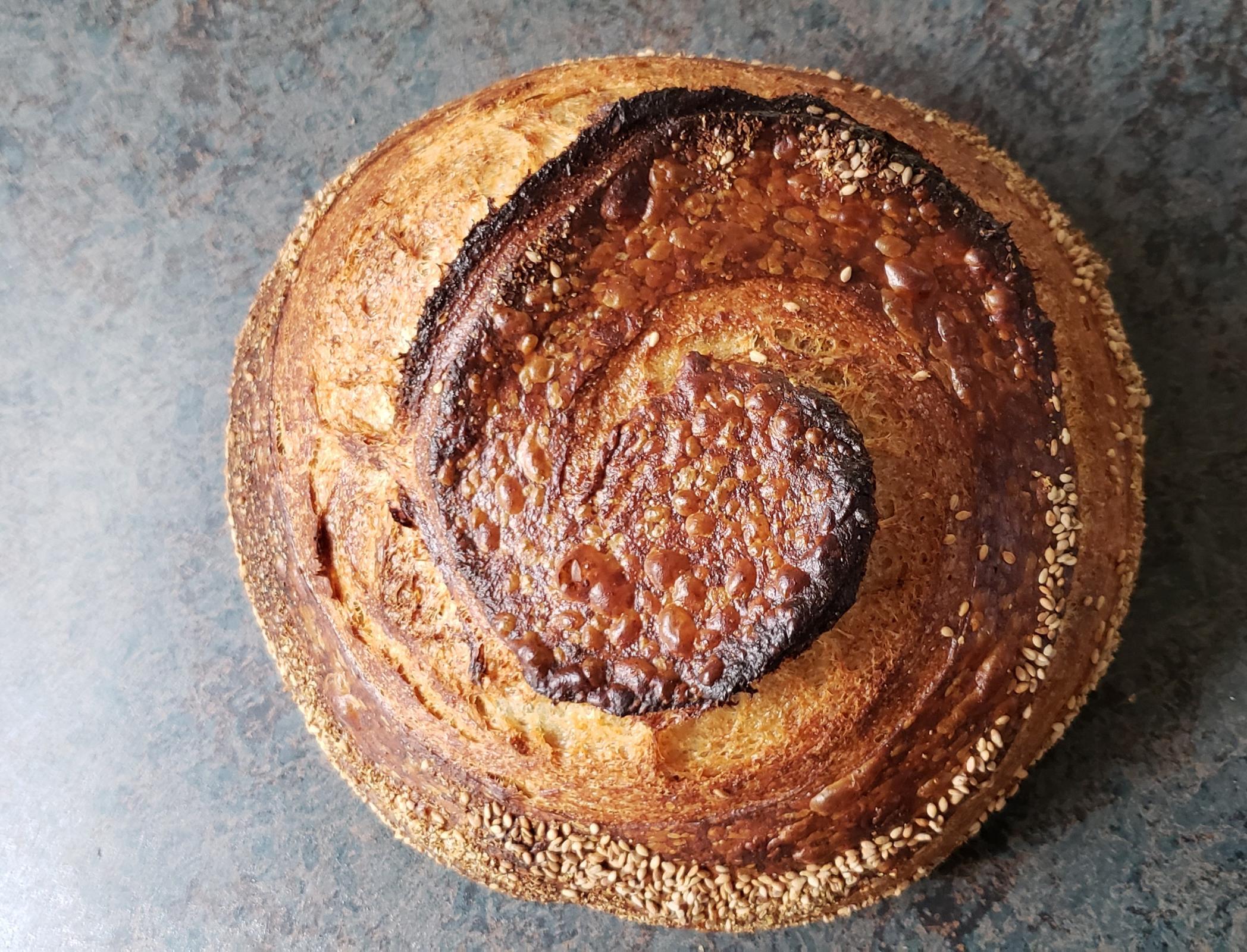 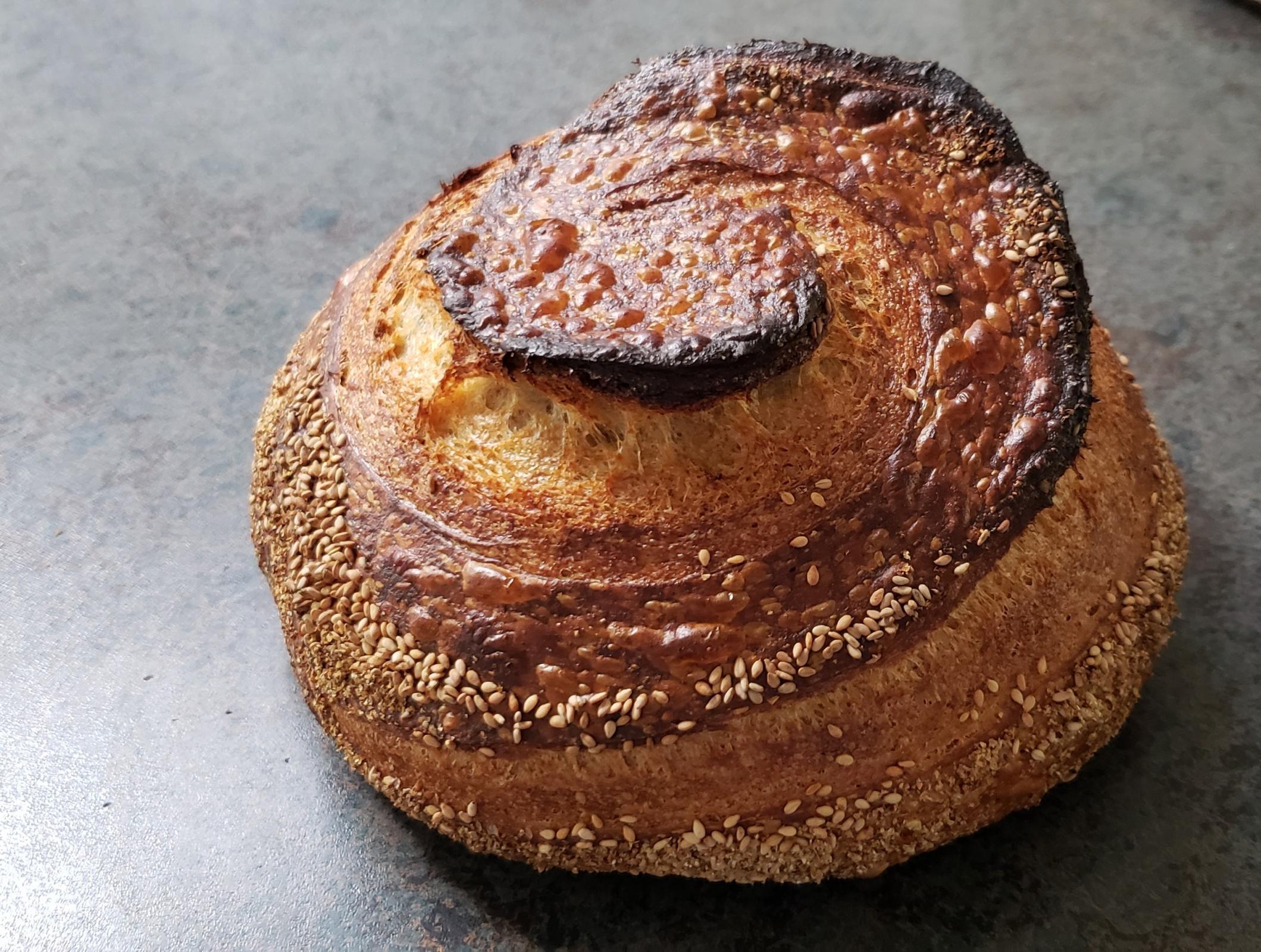 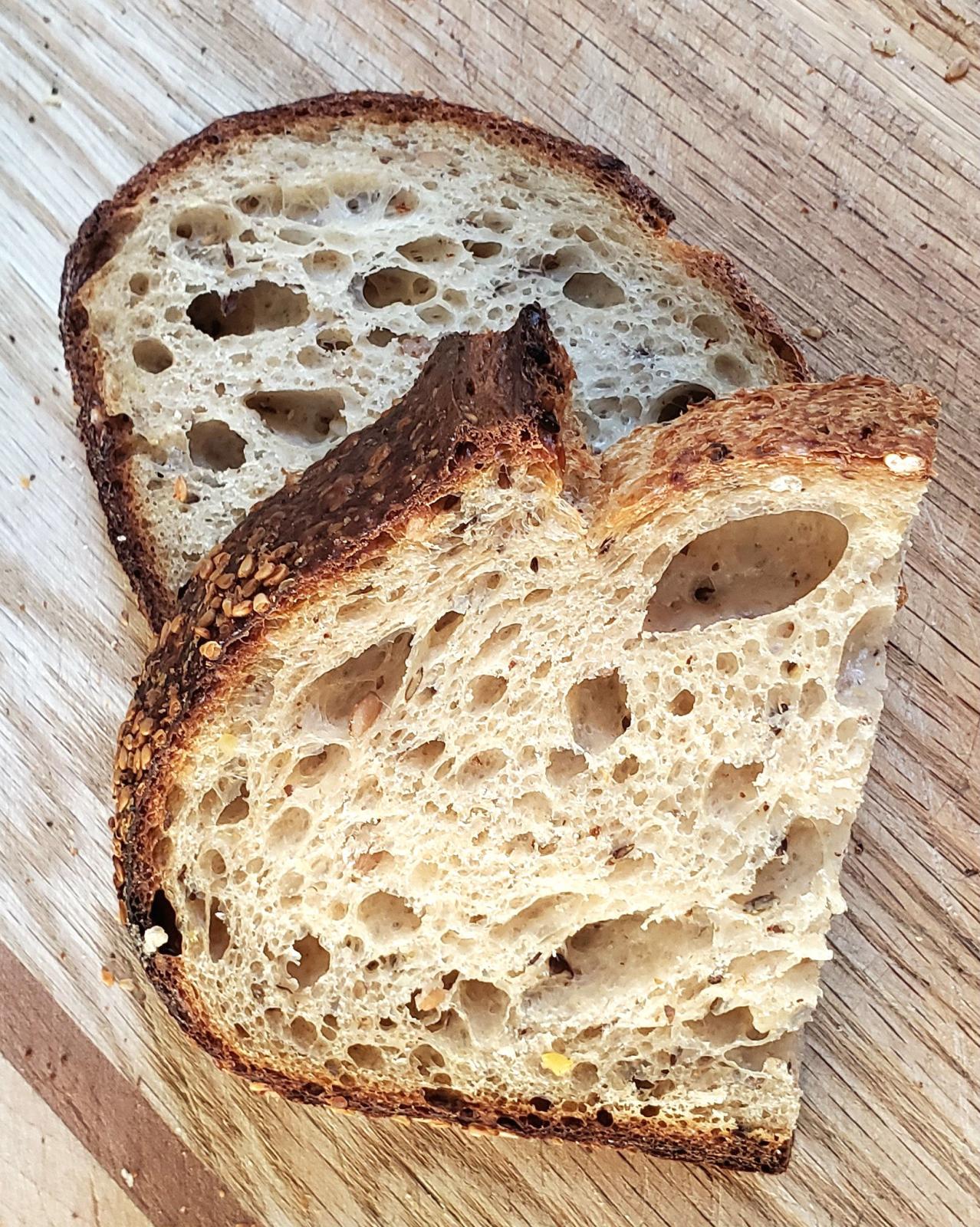 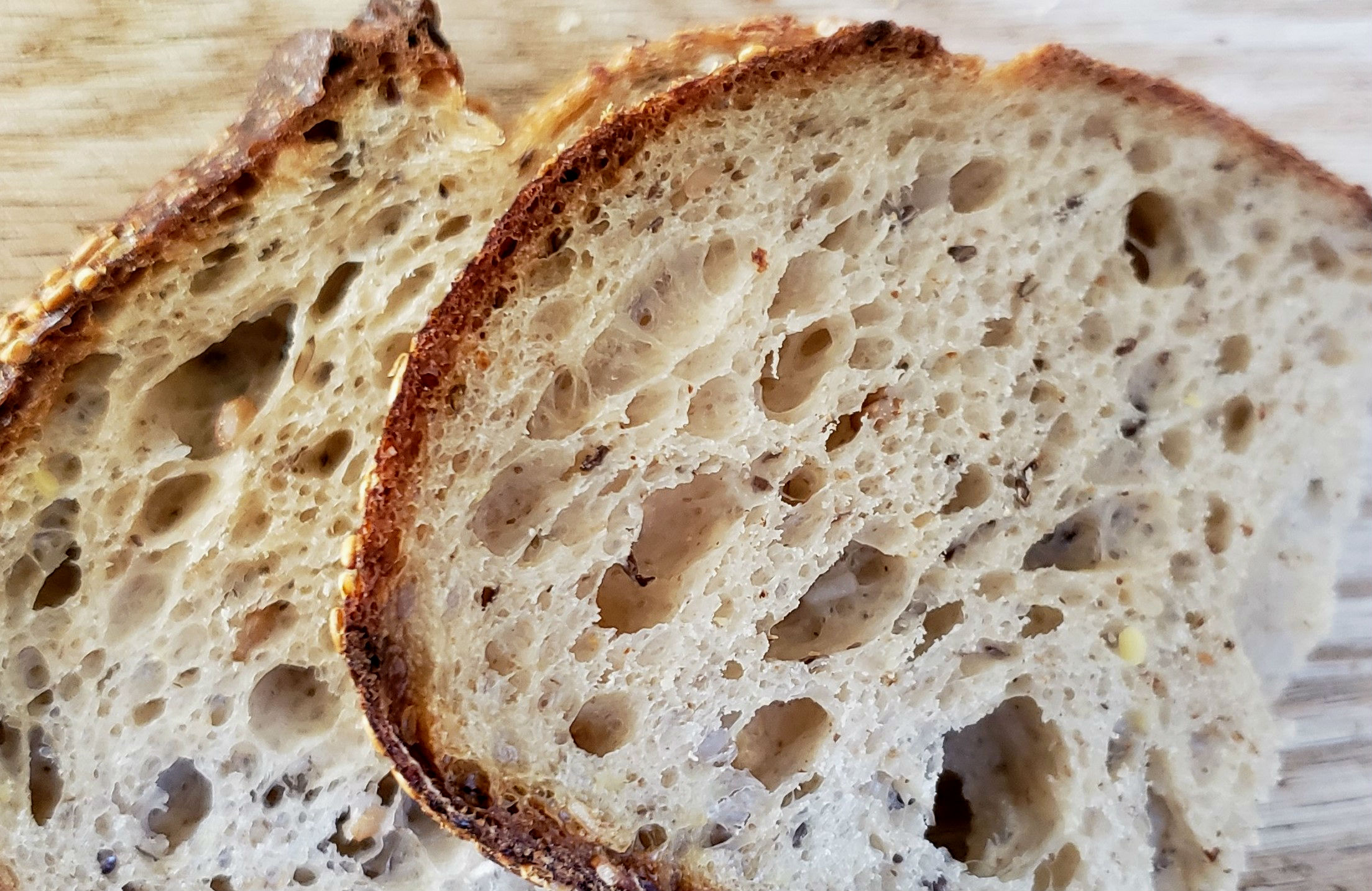 I love the spiral cut of this and the ingredients, I can almost taste them!

Thanks Angelica, the spiral cut seems to let the boule open up nicely so it's something I have been using lately.

Wow that is a stunner.  Love the scoring and the crumb.

Nice to see you posting again.  Your bread looks stunning and the crumb is as good as it gets. How long did it take the oats to sprout?  I have not tried doing that with oats yet and sounds like it's worth it.

Hi Ian, been away from TFL for awhile but still baking, thanks for having a look at my post and your kind comments.  The hull-less oats sprouted in less than 48 hour at room temperature; the rye berries sprouted almost overnight. I hope all is well with you and your family, will watch for your post of some sort of delicious sprouted bread.

Absolutely stunning and looks yummy too!

It's the blisters along the top of the spiral that make this a stand out for me. Very well done!!

Thanks Elsie, the light sesame coating is also something I really like too!  On another note,  I was thinking about you last weekend, was trying my hand at making some rou jia mo and was wondering if you might have a dough recipe and some tips for preparing the buns?  The ones I made were just ok, not too bad but a little chewier than the ones I have eaten at some of the places around here.  I appreciate China has many, many, rich and diverse regional cuisines but I think I could spend a lot of time exploring Xi-an food!

My grandparents (mom's side) migrated to HK decades ago from Southern China so I grew up eating mainly rice. To be honest. I have no idea how the authentic version tastes. I was not familiar with Northern wheat-based staples (noodles, buns etc.) until a few years ago, which was way later than when I developed an addiction for spaghetti and pizza...  That said, I've wanted to try my hands at homemade rou jia mo for months and your comment gave me the incentive to do so ASAP. It was exam period so I waited til this week to make it.

I took reference from several recipes to mix up a dough with 1% each salt, instant yeast and baking powder. My flour of choice was a special kind of Taiwanese AP flour '粉心粉'. Supposedly, it contains only the center-most part of the endosperm, making it finer and whiter in color (similar to Italian 00 flour I guess?). For some reason, it was very thirsty and I had to up the hydration to 60% so that the dough was kneadable. Still, it was a very stiff dough, comparable to 45% hydration bread flour dough. Most formula settled on 45-50% hydration though. I hand-knead the dough until it was very smooth and let it double. Then, it was fully degassed, shaped and left to rest for 30 minutes or so. It rose by roughly 30% after the rest. I cooked it uncovered for 7-8 minutes over medium-low heat, flipping several times.

This is probably not traditional but I like to wrap the mo in a lignin cloth for several minutes to prevent it from getting hard. Before serving, it was heated on both sides over medium heat. I like to put the lid on for moister mo. My mo was moist in the center and had a crispy crust. However, it also turned out a bit chewy. I personally don't mind that yet if you do, you might try increasing the hydration slightly. Some people like to destroy part of the dough gluten by mixing hot water with half of the flour (燙麵). It is later combined with the leavened dough. Another tip I learnt somewhere is extending the resting time. This makes quite a difference in terms of the final texture. I'll do more experiments and see how it goes. 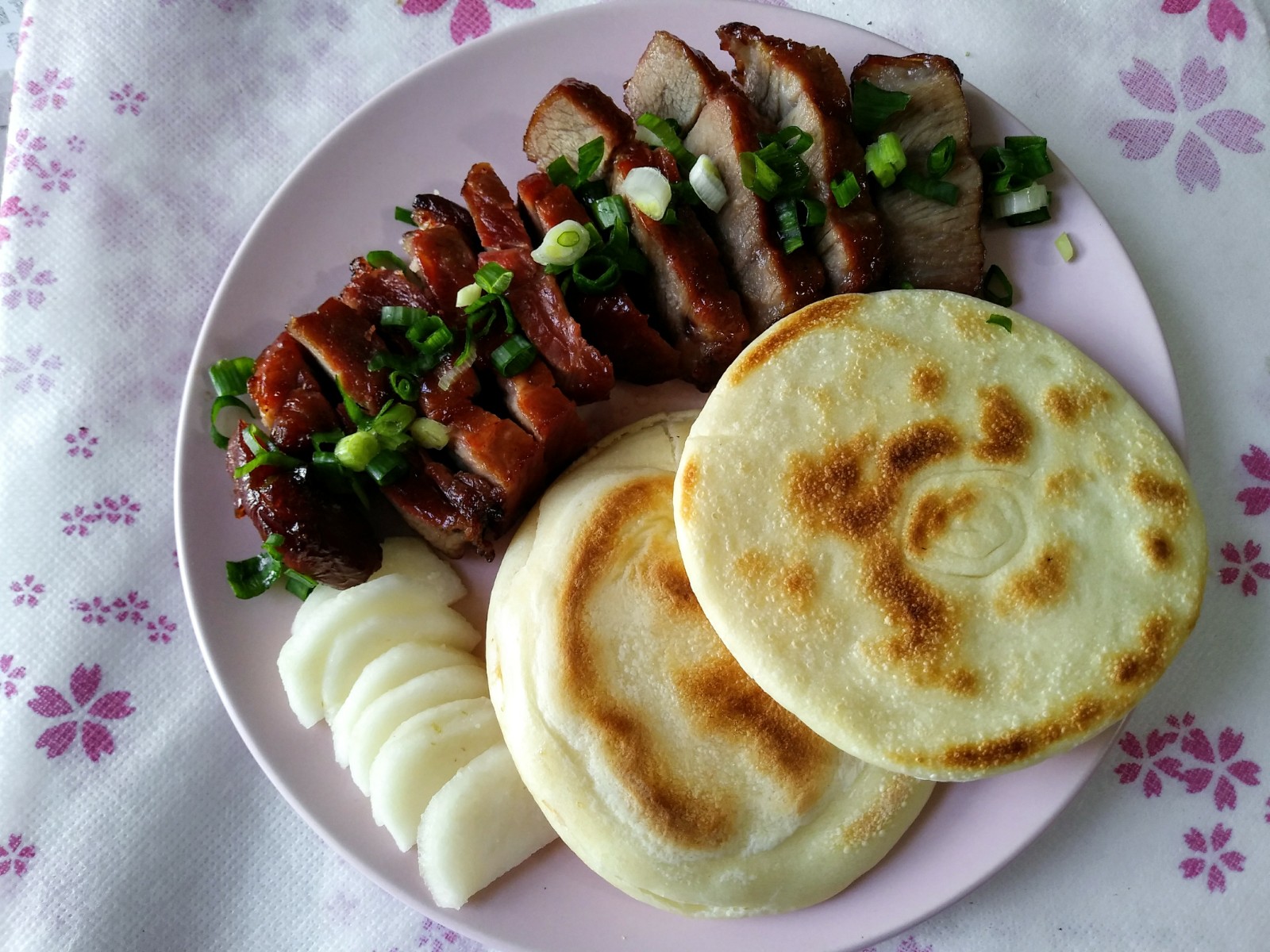 Yes, that is Char Siu. And yes, it is totally not authentic. Hopefully by now, we all know that authenticity is my least concern when it comes to food :)

Elsie, thank you so much for taking the time to explore homemade rou jia mo and sharing your notes and tips!  I appreciate the detailed write up and first hand account of your mo baking experiment, it's very helpful to have that information when trying to come up with the "perfect" rou jia mo here, lots of things to consider, thank you.  And the char siu looks delicious, really beautiful photo; and I agree 100% with you, authenticity is something to consider and respect but I don't think it should constrain the exploration of food.  I tried making some char siu using an immersion cooker to sous vide some marinated pork, then finished it with a bit of intense charcoal bbq heat  to try and create an "authentic" finish - tasted really good but obviously not an authentic Chinese bbq charsiu one can get from any number of local places around here!  Look forward to hearing about the results of your further experiments.

The bat and the spiral boule! Did you score the boule on a turntable?

Thanks Lance, the turntable is actually a pretty good idea, maybe a lazy susan or potter's wheel!  I scored the boule after transfering the cold-proofed loaf from the banneton onto a piece of parchment paper; rotated the loaf on the parchment paper while making the cut, seems to work best for me.

Well, we got a Lazy Susan as a wedding present (34 years ago!). Still in use - for icing cakes and doing the occasional spiral score. Time to try the latter again I think, inspired by Cedarmountain.

Who was Susan, anyway?

Your bakes are always gorgeous, they have always inspired me.  Just need to find some more energy!

You are very kind Leslie and I feel the same way about your bakes, your inquisitive nature and beautiful breads make me smile, thanks!

Oh my!  Pass the butter, irresitable.

Thanks Cellarvie, I agree...hard to beat freshly baked bread with butter!

Your bread with the new crop of grains is beautimous!  So well crafted and baked!  Well done as usual CM

Hi Dab, your kind comments are much appreciated as always but even better, they made me smile knowing you're still out there!  I really hope 2020 is a good year, a better year, maybe even a great year for all of us...for you and your family especially, happy new year Dab!