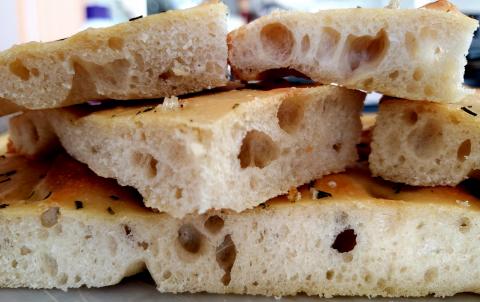 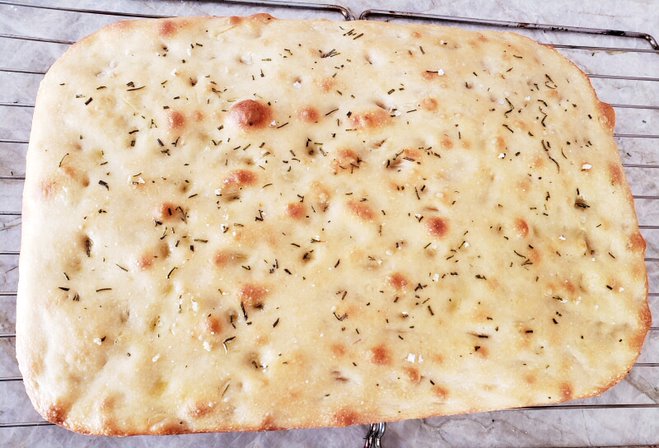 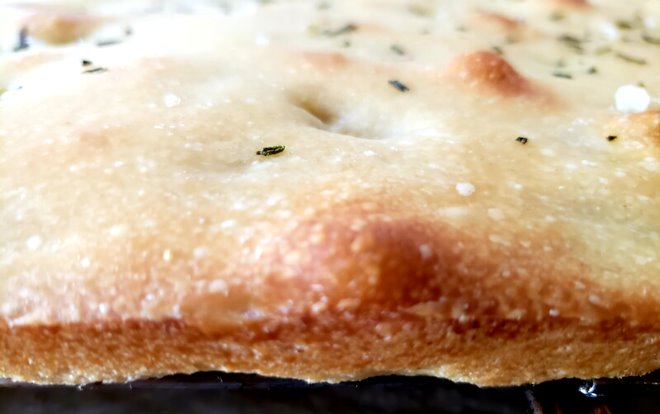 Having recently returned from a trip to Italy where we also visited Liguria for the first time, I feel in love with a good focaccia.  In fact, I craved it so much that I decided to try baking it at home, instead of my traditional sourdough bread.  I don’t use instant yeast, and always bake sourdough, so I figured I would try making a sourdough focaccia. It turned out that there are as many focaccia recipes out there as of anything else, so I used several ones from this site, as well what I found elsewhere on the internet to come up with my own.  The goal was to bake a decent first approximation, and then try tuning the recipe to improve it.  I am not bragging, but I must say that even the first attempt came out pretty nice, and the taste was certainly pretty close to what I remembered from the trip.

In the spirit of sharing, below is the recipe I used, as well as the steps.  I will be definitely making it again, perhaps with some minor adjustments.  I used regular unbleached all-purpose (AP) flour for this recipe, since I felt that focaccia didn’t need to rise too much, so strong gluten development was not necessary.

I mixed levain, warm water, and flour, and let it stand in the mixing bowl for ~1 hr to let the flour absorb water, and the yeast to start working.  Then I mixed in the salt and EVOO, and worked it in a KitchenAid stand mixer with a dough hook for ~7 min on speed 2.  Transferred the dough in a glass bowl greased with a bit of EVOO, let it stand for 1 hr, then did 3 round of S&F right in the bowl (or is it considered “pinch and fold?”) with 30 min rest intervals in between.

Since I always cold retard my sourdough breads to bake them in the morning (so we don’t wind up eating a half loaf of nice fresh bread right before bedtime 😊), I decided to cold retard this dough as well.  I retarded it in the fridge, right in the bowl overnight.

In the morning I took it out of the bowl into a 1/2 sized baking sheet greased with some EVOO, pressed down with my fingers enough to make the dough thin and spread on the sheet, brushed slightly with more EVOO, and loosely covered with plastic film. I let the dough warm up and rise on the countertop for ~1.5 hrs.

The oven was pre-heated to 450F, then I lowered the temp to 430F, sprinkled the dough with some coarse sea salt and freshly chopped rosemary and baked for 26 min, rotating the sheet once during that time.  Finally, after focaccia was removed from the oven and onto a cooling rack, it was brushed with some more EVOO! (You will notice that there’s quite a lot of olive oil being used in this recipe, as well as most other recipes I saw. For that reason, I reduced the initial amount of oil in the dough somewhat, as some recipes called for 4.5% or even more).

If I bake it again, I will report back with regards to how any adjustments helped – or didn’t. 😊