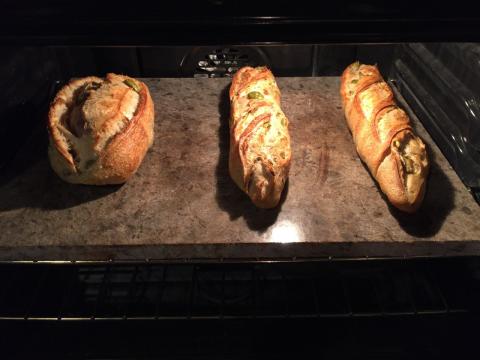 Back once more from roaming the earth and, within way less than a day home, my wife coaxed me into thinking about a next bake.  I left it to her imagination what would be next, but she deferred to me.

In the past I'd baked the Hamelman black olive levain a few handful of times, particularly in response to our building's chief engineer's constant "whining" about when I'd bake it again and slip him a loaf.

A 65% hydration dough with 25% olives makes for a hearty if not particularly open crumb.  In keeping with my M.O. of mostly avoiding posting the same thing twice here on TFL, there was just enough tweak to qualify for this post.

Changes from the original included using 100% LL instead of his 125% LL, changed to AP flour from higher protein bread flour, substituted rye flour for WW, and used rather large quarter-sliced "spears" of large green Spanish Queen olives rather than smaller and diced Kalamta flecks. Otherwise I abided by the original formula.

These olives are quite salty, so they were scaled and quartered, placed into a water bath for a while to remove some salinity, and then toweled dry.

Abel Sierra posted somewhere that baguettes should be couched seam side up.  I did so with one of the two.  But then in my infinite wisdom, once loaded into the oven, I neglected to track which of the two loaves were which since I rotate loaves a few times during the bake.

I can't check what the crumb looks like on either the batard or the more open grine baguette as they were both delivered to the chief engineer and our office manager.  Intact!

One does exhibit a more open grigne than the other, but I am clueless as to which was which.  The batard was couched seam side down. 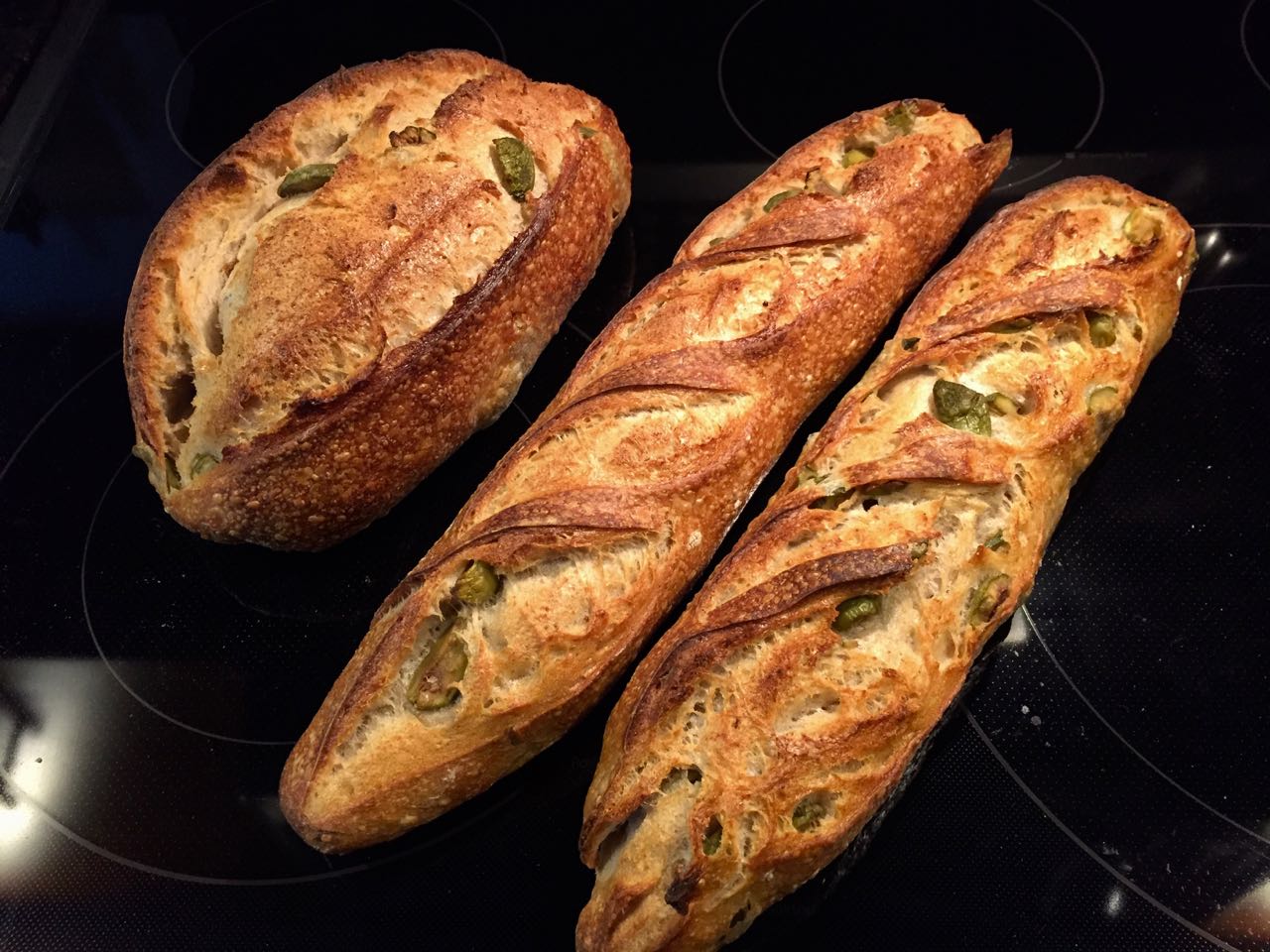 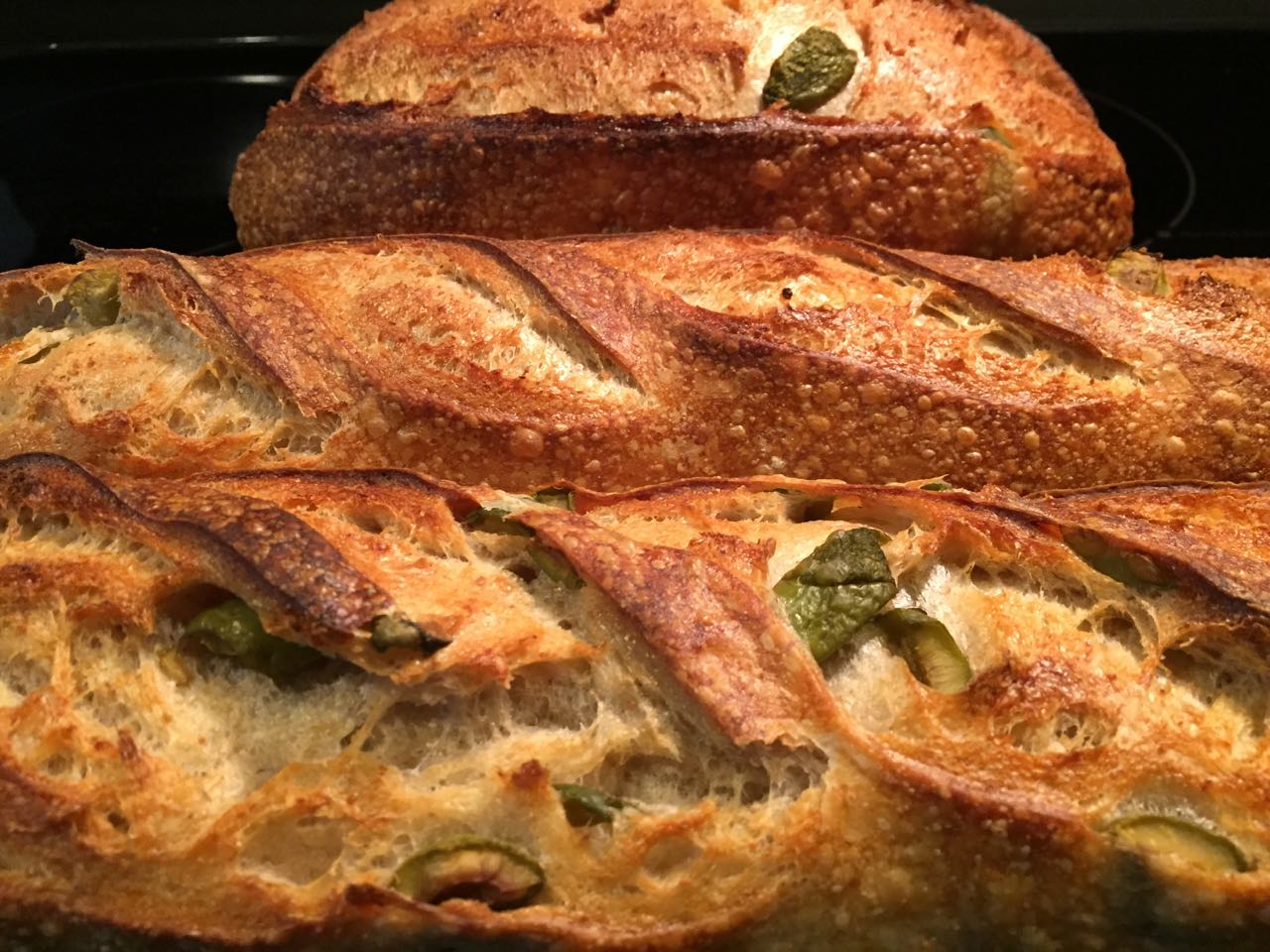 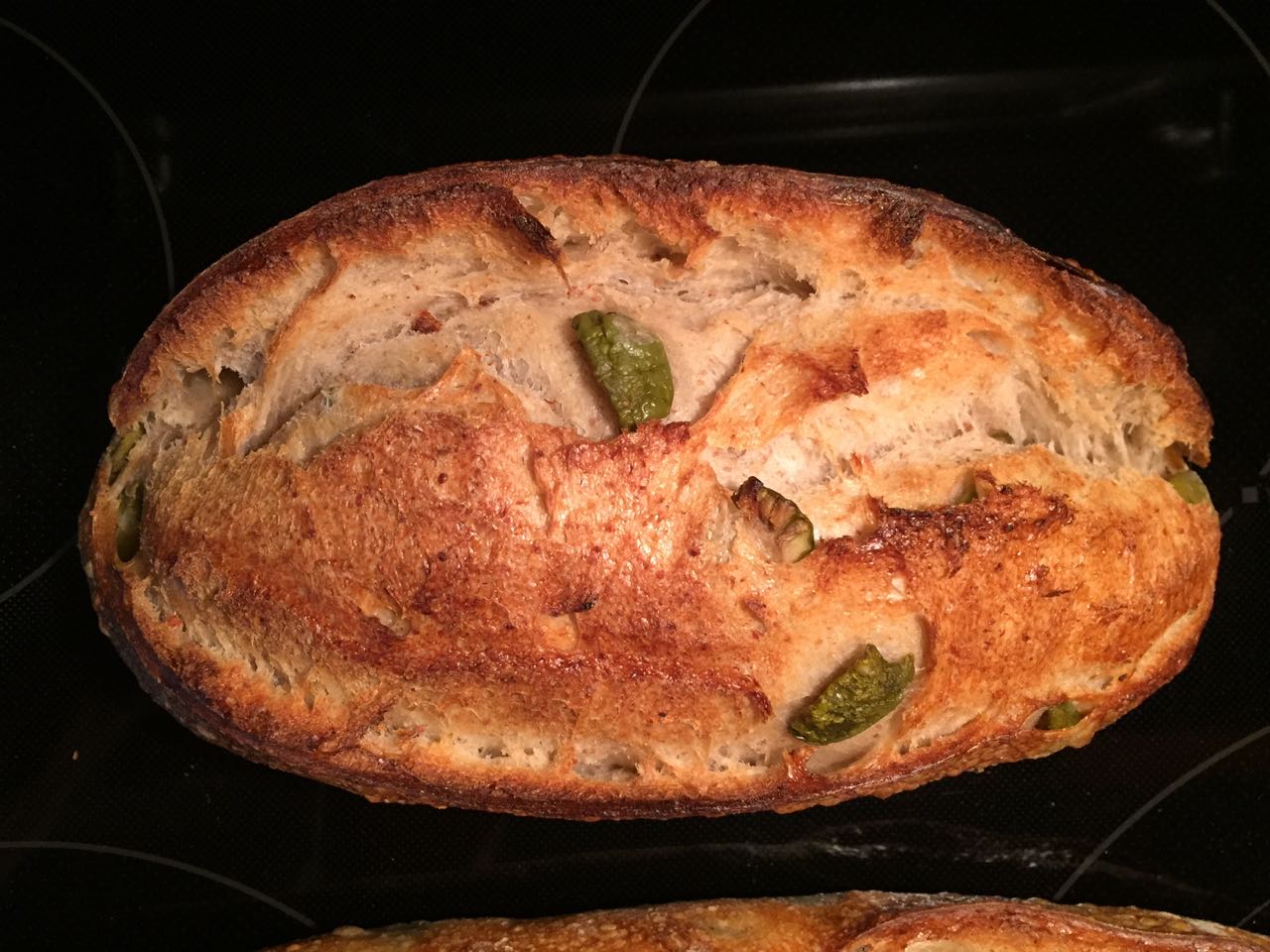 At 65% hydration and weighed down by the mass of olives, the crumb doesn't exhibit a lot of openness.  The old saying is you can't eat the holes. 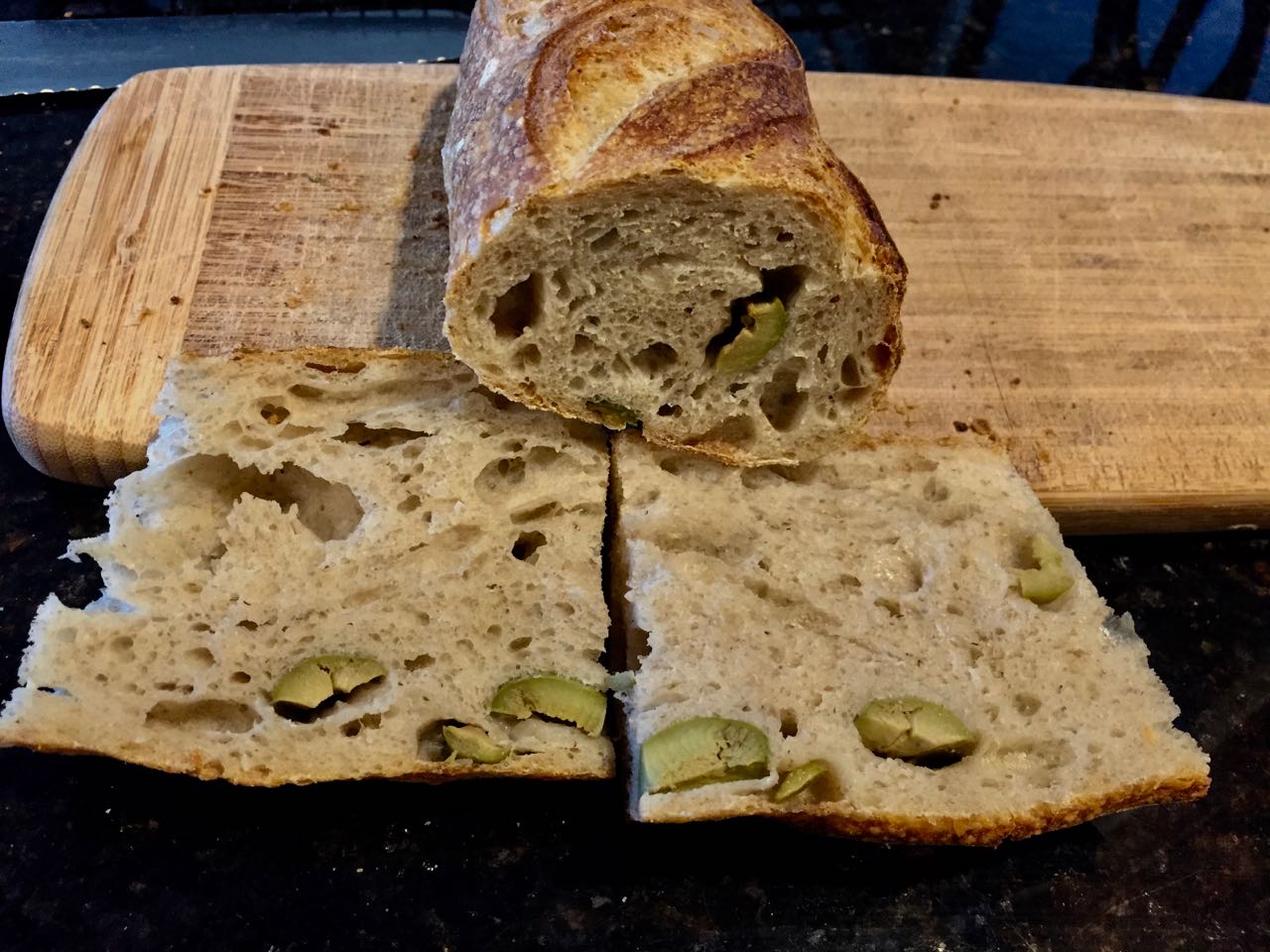 The formula normalized to 1000g

These looks and surely taste amazing! Thank you for posting as I needed an Alan picture fix! 😉

I don't do much around these parts these days, so my participation is limited.  However, I greatly appreciate the compliments, as always.  The salt is tempered down to 1.5% in anticipation of the olive's salt hit, and the olive flavor does indeed permeate.  An easy formula, and my M.O. is pretty much always the same, not that I can sleep through it as I still have to pay attention.  But familiarity and repetition surely makes one comfortable and at ease with the process.  As you well know.

Wonderful looking and I bet they taste amazing too.

WW taste was, but I favor the taste of rye more so than WW.  At only 10% of the total flour, the taste is only hinted at.  But tasty it is.

I believe you could score a watermelon, place it outside in the sun for a few hours, and it would surely produce an ear <LOL>

If you were an ENT, your specialty would have to be ears...

My best score was sets of tickets on consecutive days, evening followed by afternoon of seeing the Rolling Stones at Madison Square Garden in 1972.  Stevie Wonder opened on that tour.  After that most everything paled by comparison.  Just by chance, my summer jog had me working about 3 or 4 blocks away.  I got the okay to leave work early for the show.

Unfortunately I would never eat this bake since I detest olives, but I may need to make it for my wife one day.

So where were you off galavanting this time?

Also perfect except for that olive thang.

My wife was in a Dragon Boat Race (actually any category of water craft powered by paddles) on the Seine in Paris, so I just had to go too!  Pretty much two weeks for there and Amsterdam.  Her team came in first in their category.  www.traverseine.fr

The team cruising by the Île de la cité (where Notre Dame cathedral is located) just past the halfway point. 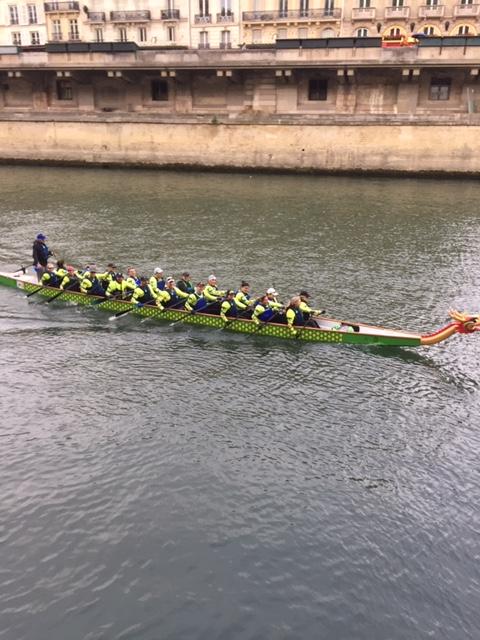 Wow!  That looks like so much fun.  That must have been a blast.  I've never been to Paris but will get there one day hopefully.

Elsie_iu
October 14, 2019 - 7:02am
I thought those green matters poking out were pistachios

at first glance :) Kalamata olives were all the rage a while ago (maybe still are?) that I was keen to sub them for green olives whenever there was a chance. It had taken a while before I realized the two varieties aren't actually that different. How silly I was to pay twice the price just for the colour.

Btw, you got blisters not only on the bread crust, but also on the olives. Very cool indeed! I don't see anything wrong with the crumb. Oh, if you want to create more holes though, simply cut the olives crosswise next time... What?

are quite different from Kalamatas, both in size as well as taste.  Here is what I posted in late 2016 on the bread with Kalamatas.  The few other changes documented above.These are "prettier"! 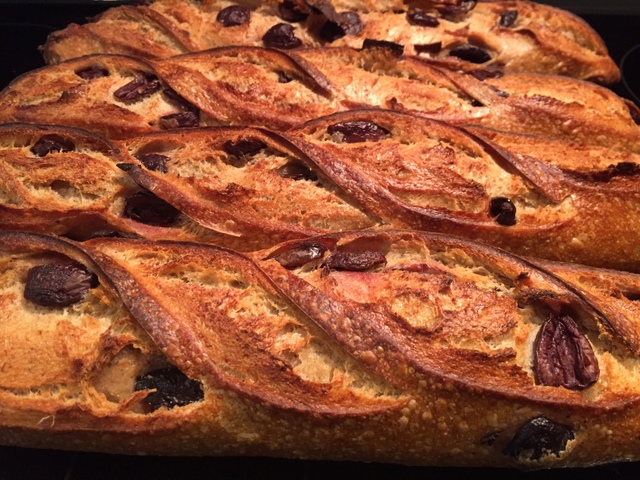 and what amazing looking bread! This is another one on my to do list...and great inspiration as always..

Next time come over to London to see some TFL friends...Kat