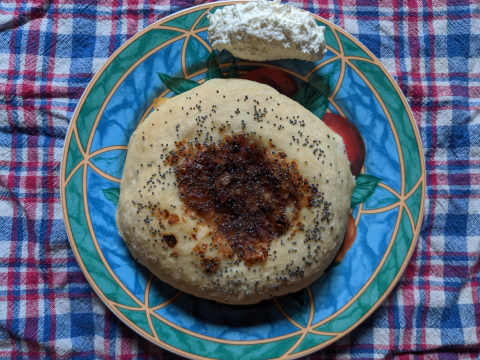 It's been a long, hot summer. Well...not so long, but hot. Too hot to fire up the oven here in the house--and I hate that thought. So as the temperatures are dropping, so are the levels in my flour store since I'm making up for lost time. Add to that the fact that I'm looking for a new gig--as a bread baker and you've got the perfect recipe for....well....baking. As I was researching one of the places I was applying to today, I came across a menu item that I had not heard the name of--the Bialy. I was curious because the photo they had on their site looked tempting.

So I started digging around on the internet and found a few formulas (including Hammelman's on the BBGA website). I also discovered that legend has it that the bilay originally hailed from Bialystock, Poland before it was introduced in NYC about 100 years ago. Hey...I happen to be Polish and am a sucker for trying any food from that country. SO it was game on. Using several recipes for inspiration, I came up with the following, which borrows heavily from Hammelman and several other blog posts:

Onion filling:
1 medium red onion, minced in a food processor (it was too strong to do by hand...)
a bit of salt
1 tsp poppy seeds
olive oil

For filling:
Heat oil in a pan, then add onions and salt to taste. Sautee the onions until they darken up a bit and become sweet. Remove from heat and add poppy seeds. Set aside

Bread
Confession time...I didn't get this right out of the gate. The original formula I used had 16 ounces of flour and was...well, anyone remember attempting to eat the salted dough that you can use for making things like Christmas ornaments? Yeah...it was almost like that originally (oops), so I added more salt and more water to arrive at the numbers above.

Anyway...nothing fancy here. Mix as usual, knead for...well, until it's ready (I had a smooth, sticky dough when done). Set it in a lightly oiled bowl for bulk fermentation for about 11/2 hours. Degas, divide 12 ways (roughly 5 ounces per portion), and make flattened rounds, putting each on a half sheet covered with parchment paper. Cover and let rise for 30 minutes. Then, create a depression in the middle of the round (about 1/2 of the round? I eyeballed it) and fill with the filling (I used roughly 1tsp each...it took some experimenting to get a roughly even amount between them all).  Let rise for an additional 20 minutes or so and then pre-heat your oven to 450 degrees. Sprinkle with additional poppy seeds and bake for 12-15 minutes.  Note, I had 2 half sheets, one that I'm not too fond of so I swapped racks and rotated them about 1/2 way through the baking process too prevent burning and make sure they cooked evenly.

Hope you enjoy! I had one as soon as it was cool enough to eat and it was FABULOUS.