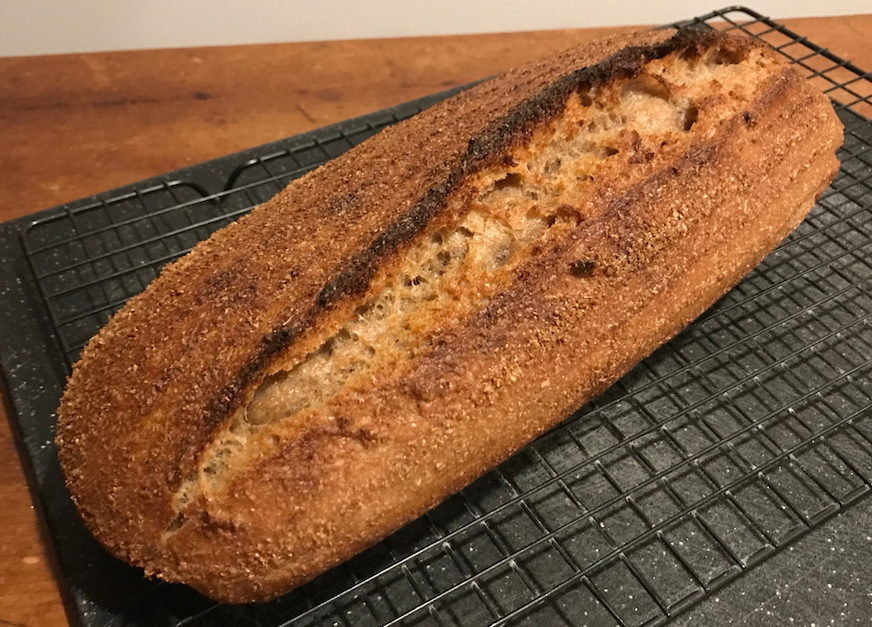 I frequently make a 100% whole spelt sourdough loaf that involves mixing everything up all at once (including 60 grams (1/4 cup) starter), doing 3 stretch and folds over an hour and a half, and letting the dough sit at room temp for about 12-14 hours, followed by a preshape, shape, ~1 1/2 hour proof, and bake. It's the No-Knead approach but with three stretch & folds thrown in. Very simple, so far works every time, and produces a delicious, tangy loaf. The recipe calls for 68% hydration. My starter is 100% hydration organic whole wheat.

Inspired by what I have seen and read on this site, I have recently baked several loaves that involved a more complex process that calls for a levain. I decided to mix things up re: my reliable spelt recipe, and the results are excellent. I'm not sure the taste is so different from what I usually get, but I was able to up the hydration to 72%. I used roughly 84% BRM spelt flour and 14% KA bread flour to make the levain. The remaining 2% is the whole wheat flour in the starter.

I ended up using both a cold bulk ferment (for part of the bulk), and a cold proof. The cold bulk was not part of the plan, but I had to go out for a few hours. I planned to bake the loaf at night, but in the end opted to cold proof overnight so that I could sleep (!) and baked the next morning. The whole process took about 35 hours, from making the levain to baking.

The dough was more difficult to handle than usual, owing to the higher hydration, and I worried the loaf would come out flat. But the oven spring is pretty decent, pretty typical for my spelt loaves. The 15% bread flour no doubt helps add some lift. 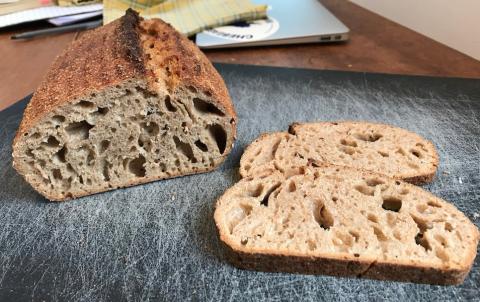 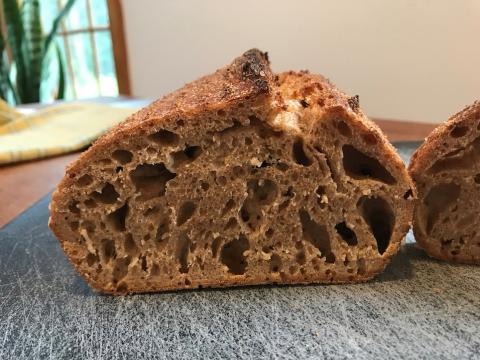 Everything about this loaf is great: nice crust, chewy but tender interior, decent tang (not overpowering but definite), and spelty deliciousness.

At 9 pm I created the levain. I keep a small jar of mother starter in the fridge. I refreshed the starter earlier that day and at night used 20 grams of ripe starter for the levain build. Covered with plastic and let sit at room temperature for 11 hours until the next morning.

8 am. Levain was bubbly. In a large bowl I dissolved the agave syrup in the water. Added the levain, stirred to mix that well, then added the flours. Mixed well first with a dough whisk then kneading and folding by hand. Added the salt a bit at a time followed by more hand mixing (I should have dissolved the salt in the water before adding flour). Mixed thoroughly, then covered with plastic and let sit for 1 hour.

9 am. After an hour I began the first of three stretch and folds. Usually I pick the dough up out of the bowl and do this in my hands, but because of the wetter dough I performed the S&Fs in the bowl. Covered and let rest for 30 mins.

12:30 pm. I had to leave the house for several hours, so the covered bowl went into the refrigerator. It was a hot day, and with the lively levain the dough developed more quickly than expected.

6:30 pm. Took bowl w/dough out of the refrigerator to resume room temp bulk. We keep our fridge *really* cold, around 35 degrees F. I stuck the bowl in the oven, using the proofing setting (set at 85 degrees), which helped it warm up. Dough was ready for preshaping around 9:30 pm.

9:30 pm. Scraped the dough out, letter-folded it, and rested ~20 minutes. Shaped into an oblong and placed in a banneton oiled and lined with bran (I often use rice and/or AP flour).

7:05 am. Flipped dough from banneton onto parchment lined peel. Scored and used parchment to transfer to preheated clay baker. I usually turn the temp down to 450 at this point.

7:47. Removed it from the oven. Temp was right around 210. We didn't slice into it until the late afternoon, after I got home from work.

This bread looks amazing, it has such an interesting looking texture. I haven't experimented much with whole grains, but maybe I'll try it sometime!