Would be nice if you all could help me strategize better steaming in my gas oven for either multiple loaves or uniquely shaped breads.

My gas oven has several vents along the top of the door, and therefore, typically recommended steaming methods such as wet towels, ice, chains, etc, do not work.  Not really a problem so far because a stainless steel bowl inverted over a 14x14x5/8 kiln shelf works very well.  The difference between no steam and the SS bowl is quite distinct.

Of course, a dutch oven would work as well, but I don't have one.

Now I'd to to bake more loaves at once and more oddly shaped breads such as baguettes, fooeygassies [sic], etc.

Without getting a new oven, the only thing I can think of: get a custom sized stone to fit the interior of my oven, and a hotel pan.

I can get a 21x12x6 hotel pan at my local restaurant supply store - I haven't double-checked yet whether the LxW measurements are the interior cavity, or include the lip (which would make the cavity smaller).

This combo would let me do 2-3 batards at once, or 3-4 baguettes. What I don't like is that hotel pan - it's pretty much single use and I don't really have a place to store it when not baking.  This full size pan is pretty huge.

Any better ideas?  I'm not interested in the multiple-dutch oven solution, either.

Thank you for your time!

kendalm has made absolutely fantastic baguettes, croissants, etc. in his gas oven.  He seems to not be active here for the past year,  He has a gas oven, and with some strategies he was able to create the steam environment that electric ovens produce.  Do a search on kendalm and gas oven, etc. to see how he did what he did.

Not sure I am comfortable doing that, with the potentially hazardous issues.  I've been reading up blocking vents, and may consider trying suggestions (one was to turn off the oven during steaming, which I might actually try).

Thank you for the response :)

Thanks again!  I baked three loaves, and long story short, I got it to work, but will take a little tweaking.

Strategy that resulted in some success: preheat oven at 550F, microwave wet towels until hot to touch, transfer to pan with boiling water, put into oven for a couple minutes, plug vents, dough into oven, turn oven off for 10-15 minutes.  Remove vent plugs, remove towels, bake at 425F until done.

Here are details of the experiment in case you are interested.

Loaf 1 was control, where I baked on my stone with SS bowl first 18 minutes and then without for another ~17-23 minutes.  Great spring and crumb and color.  Feels much lighter than it actually weighs (baked loaf about 415g). 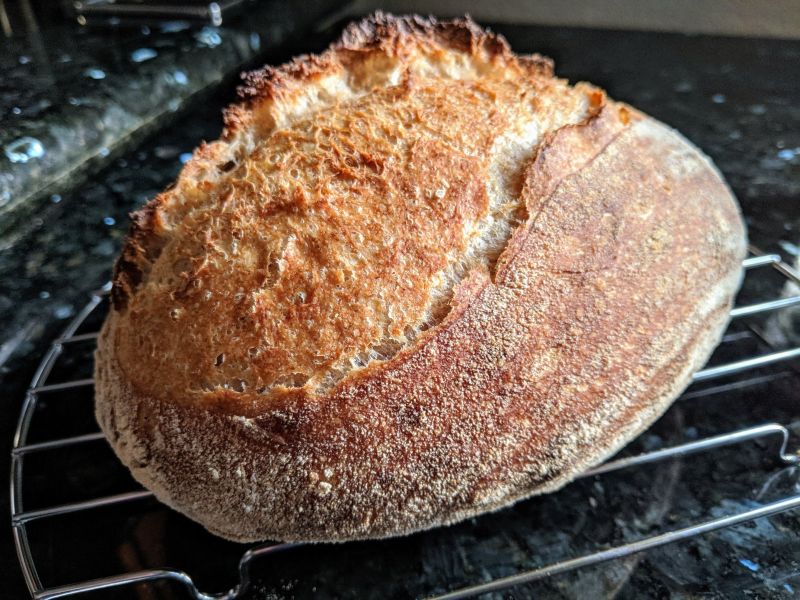 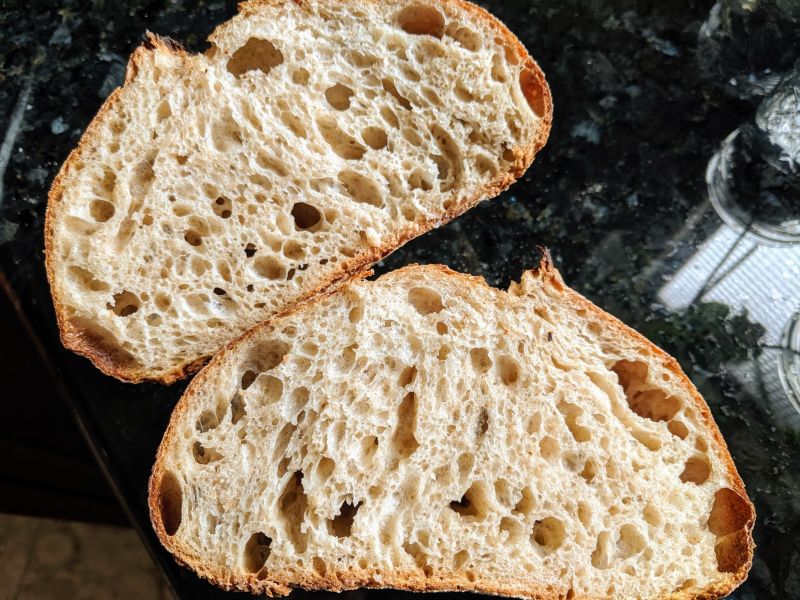 Loaf 2 was from the same bulk as #1.  Sorry, no whole loaf picture.  Strategy here was to bake at conventional setting (no fan) with vents plugged (oven on.. I went ahead and risked it yikes!!).  Funny smell from oven.  After 10 minutes, the loaf began to brown quickly, and when I opened the oven door to remove the towels, I was hit with a ball of steam in the face.  Towels used to plug vents had browned a bit, oops, need to dampen them next time.  Bread was very brown by about 20 minutes, way too short.  Crumb was under baked, gummy, and felt quite dense, with heft to it.  Picture makes it look like an open crumb, those are just shadows from the lightning, it was not.  Look at bottom of crust, not even browned. 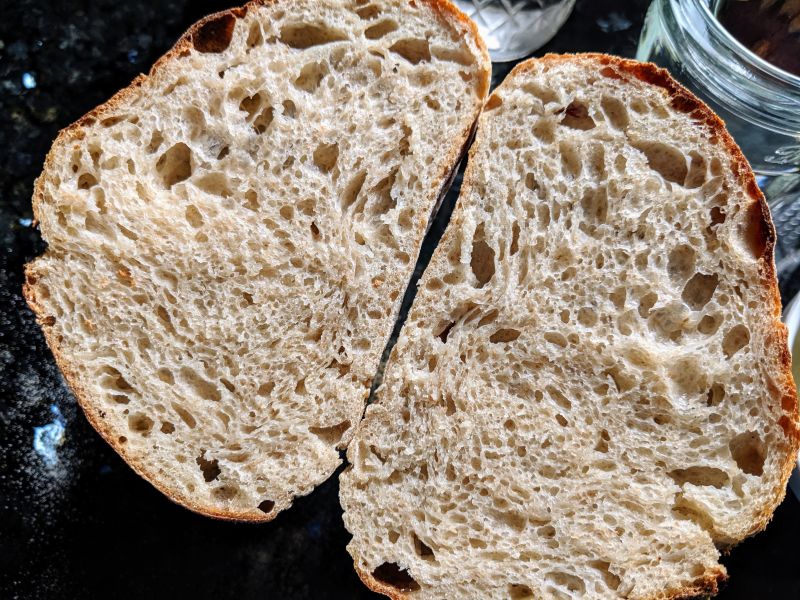 Loaf 3 was a new dough, same bulk time and proof as control from day before.  This time I followed above strategy, to turn off oven after plugging vents and loading the dough.  When steaming completed, oven measured about 400F.  Cool.  Decent oven spring, open crumb, slightly thicker crust on top.  Not quite as much as 1st, but there could be other factors such as shaping (see big bubbles at edge of crust).  Neat. It was a little heftier than the first loaf. 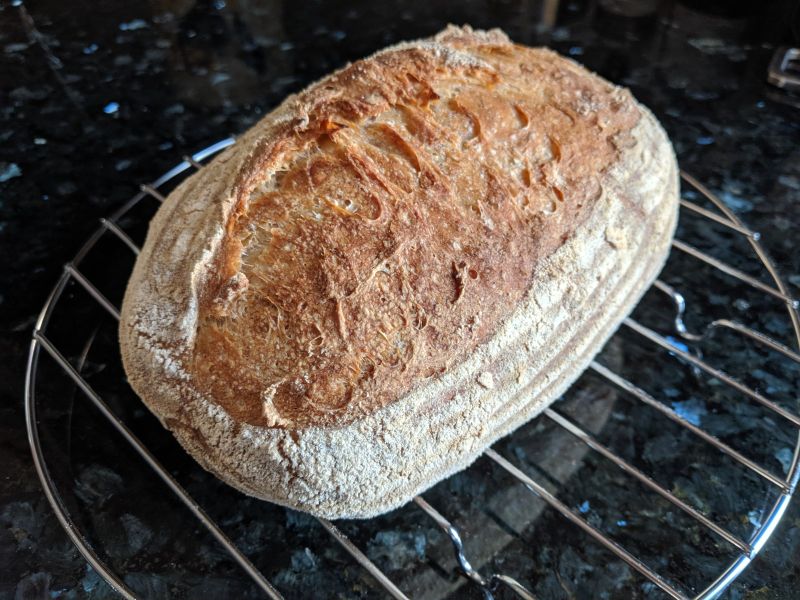 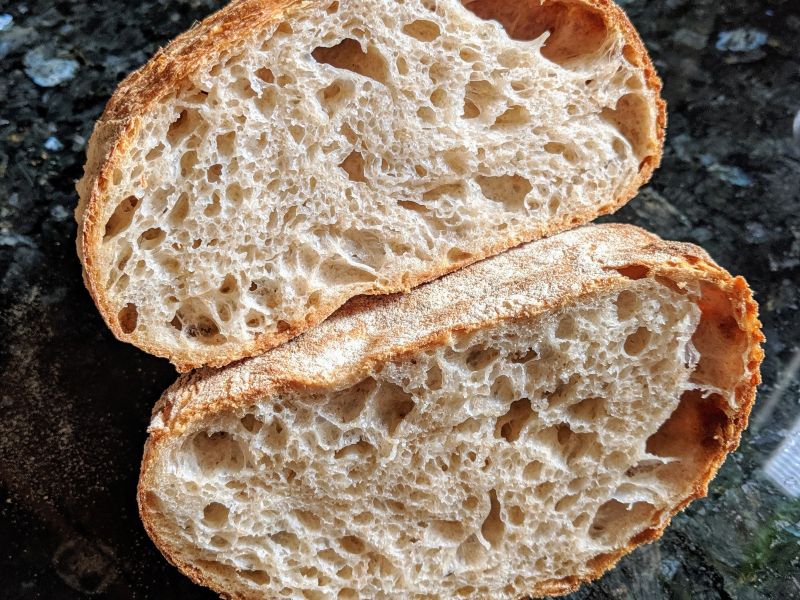 Next time I might try spraying the loaf with water before it goes in.

Thanks again for the help!