sweet potato and a dash of Turmeric

sweet potato and a dash of Turmeric 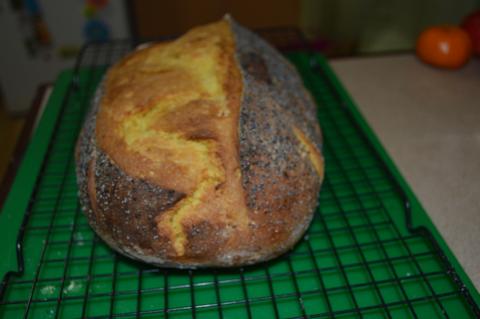 I stopped off at the local IGA and purchased the very convenient small pack of yeast at 82 cents and 2kgs of black and gold flour $1.50 and took them to my daughters house where i was to mind my eldest teenage grand daughter (school holidays) and my wife had the other 2 at our house (sleepover). The minding of the teenager is relatively easy they sleep in then when they do wake get straight onto their electronic devices, so making a loaf was to give me something to do.

There was some sweet potato in the cupboard so it was going to be put to good use, i quickly worked out a formula for a 750g loaf whilst the sweet potato was cooking. There was no need to rush this dough as it would need to go back to my place to be baked as the daughters oven is not working, the yeast was going to be @1% but it was to be added to all the water and an equal weight of the flour this was bought together and set aside covered (Autolyse). The remaining flour ,salt,coconut oil which i have not used before and the sweet potato now cooked and mashed were made ready to be added to the ferment that was activated. After 1 hour the remaining ingredients were pitched in and the dough mixing commenced this was accomplished by hand on the bench.

The dough was given a half hour reprieve and rested before a bit more bench action and a nice smooth elastic dough was achieved this was then placed in a bowl to Bulk ferment for several hours. once my wife and the other 2 grand daughters arrived after their visit to the local park that has a flying fox i was relieved of my minding duties and took my dough with me home. I determined that the dough was ready so knocked it back and handed it up to expel the gas and bring it back to a compact shape. it was then covered and given a 30 minute rest. The dough was then shaped and placed in a lined Banneton proofing basket it was placed into a plastic bag and put into the fridge as i was unsure how long the final proof would take and i was due to take my grand nephew for a driving lesson, so the retarding would suit me best. The lesson went well and he will be booking his test very soon. I taught his dad my Nephew to drive many years back. Upon return the dough had still risen i the fridge but it hadn't overproofed so half an hour on the bench whilst the oven heated was Goldie Locks porridge (just right) i was going to bake directly on the pizza stone and utilise a tray with a folded terry towel and boiling water to produce a good steamy environment for the first 10 minutes of the bake when the rapid expansion takes place. The dough piece was rolled from the banneton onto the hot stone, it was brushed with a boiled cornflour wash and sprinkled with poppy seed and given a deep lengthwise slash and some supplementary cuts along the sides the dough was then placed into the oven with the already steaming tray/towel doing its job, for the initial 10 minutes the oven is cranked up full as the steam effect does have a dampening effect on the heat. After 10 minutes and the loaf has finished its spring the door is opened and the tray removed the temperature lowered to 210 and the bake continues. when the towel is hung up in the laundry you can see the amount of steam still coming from it. A further 20 - 25 minutes and the loaf is done pulled from the oven and onto a rack to cool ,be photographed and once quite cool cut open and tasted . So there we have it a Sweet Potato loaf using compressed yeast with a dusting of Turmeric. 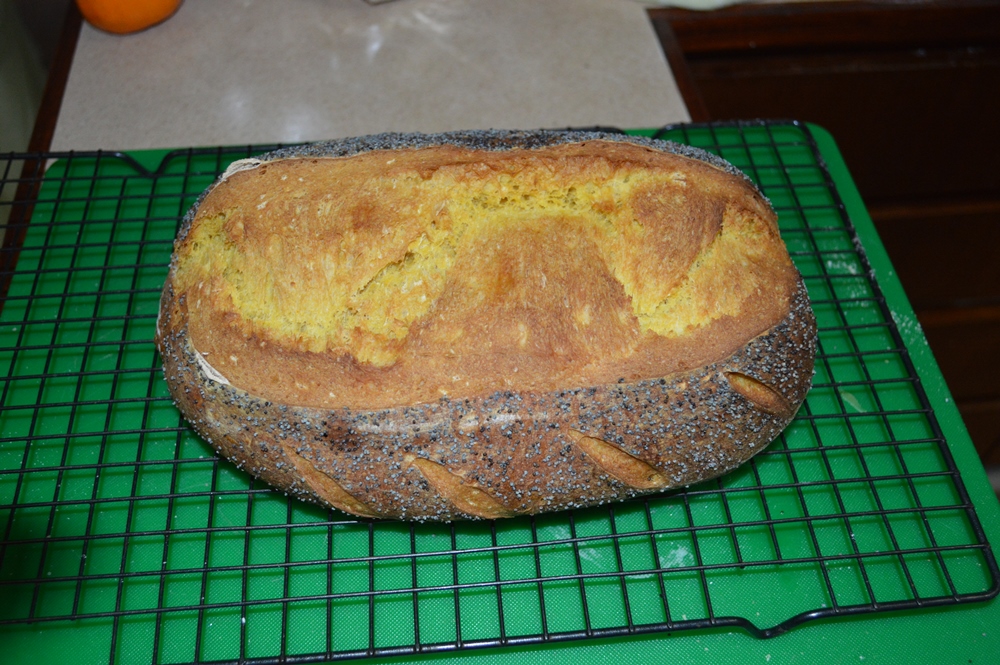 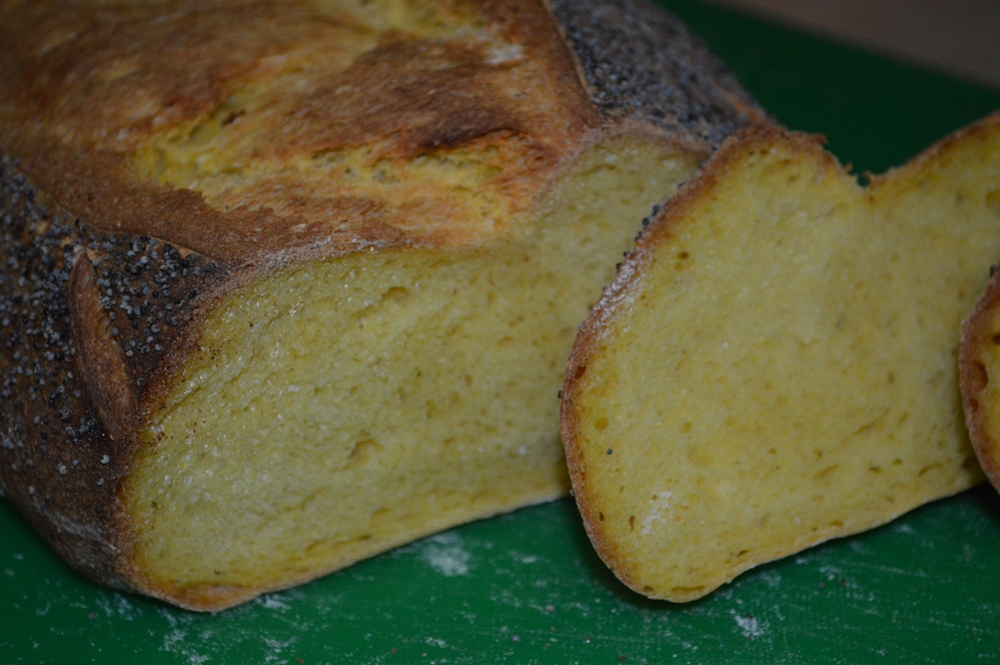 Hi Mermidon, It was delicious especially toasted, first time I have used the  Organic  extra virgin coconut oil, it is claimed to be  unrefined cold pressed in its raw form free from chemical processing preservatives  or artificial  colours or flavours. It also claims to be Cholesterol free and is  recommended  for cooking and baking, skin and hair care.

As it was in my daughters larder  I decided to give it a go,  it's white in colour and seems to melt quite easily  it solidifies below 26 degrees and easily incorporates into the dough. I think it will definitely be added to my baking cupboard inventory.