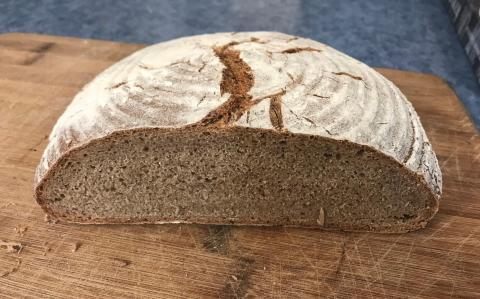 This is an 87% rye with a lot going on: a 3-stage rye sponge, a whole-wheat sponge, and a rye flour soaker. It calls for medium rye, which is a difficult thing to pin down. All I have at the moment are white rye and a finely milled whole rye, so I mixed and matched those two flours in various percentages for this bread.

It also calls for 4 tsps Brotgewürz. I used 2 tsps of the bread spice I already had mixed up, the bulk of which is ground caraway. It's not very noticeable, which is the way I like it.

The total flour is almost 1kg, and I succumbed to the temptation to make two loaves instead of one as called out in the recipe. Next time I will definitely make one big loaf.