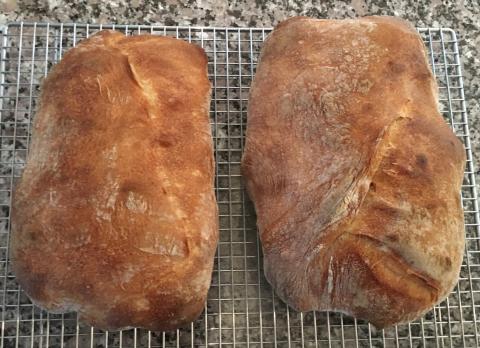 A few months after Alan (aka alfanso) posted his bake of the Scott McGee ciabatta, I finally got around to baking the bread.  The result was pleasing, with one loaf consumed at home by my wife and me and the other given away to a neighbor.

I used my KitchenAid Artisan mixer and followed Alan's directions for speed levels, but I have never done French Folds and decided not to make this my first venture into that technique.  Instead, I worked the shaggy dough in the mixing bowl by some hearty hand pulling (think of what Trevor J. Wilson does in his mixing bowls) and observed some nice gluten development already.  The bassinage was interesting.  I opted to combine the water, olive oil, and salt in a Pyrex measuring cup for easy pouring.  The shaggy dough was a little stiff, but when I added a bit of the mixture and the dough loosened, the speed of the mixer let me know to wait until that dose was absorbed.  I repeated that a few times, gradually incorporating the bassinage elements until upping the mixer speed to 6 and then 8.

The dough did not climb the hook very much, and I found that the pauses for scraping down the sides of the bowl seemed to give the dough a chance to recover.  By the end, with the dough slapping around on the 8 speed, the smooth and shiny texture I had been hoping to see was present.  As Alan predicted, the mixer generates some heat in the dough, and my final dough temperature was 83dF.  My water temperatures were 71dF for the initial mix and 65dF for the bassinage, but clearly these could be lowered.  On the other hand, aside from a slightly faster bulk fermentation and final proofing, I do not think that the 83dF made much of a difference from what something like 77dF might have produced.

This is an amazingly billowy dough, but with a lot of strength.  I chose to shape the dough by first dividing the mass into two portions and then flattening each portion into a rectangle and doing a letter fold on each before placing them onto a couche for proofing.  They puffed a bit, but when placed into the oven, they ballooned.

I use lava stones in pie pans for steaming, but I also spray ciabatta before it goes into the oven.  After thirteen minutes I opened the oven door and allowed the steam to escape.  Thereafter I kept an eye on the loaves, which started to darken.  A check of the internal temperatures showed 209dF after another dozen minutes, and ultimately I removed the loaves after a total of thirty-two minutes of baking.

Here are the loaves on the cooling rack. 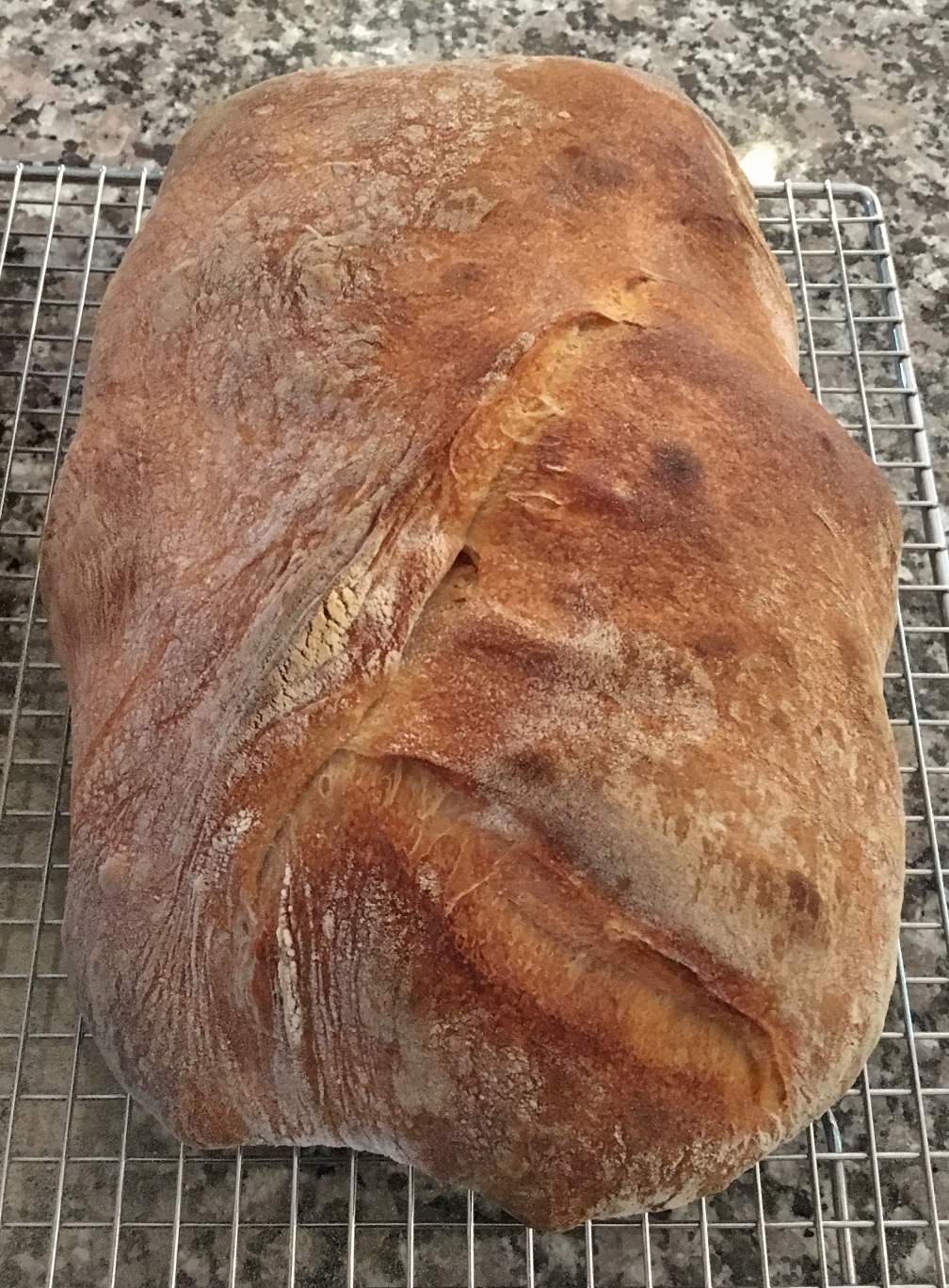 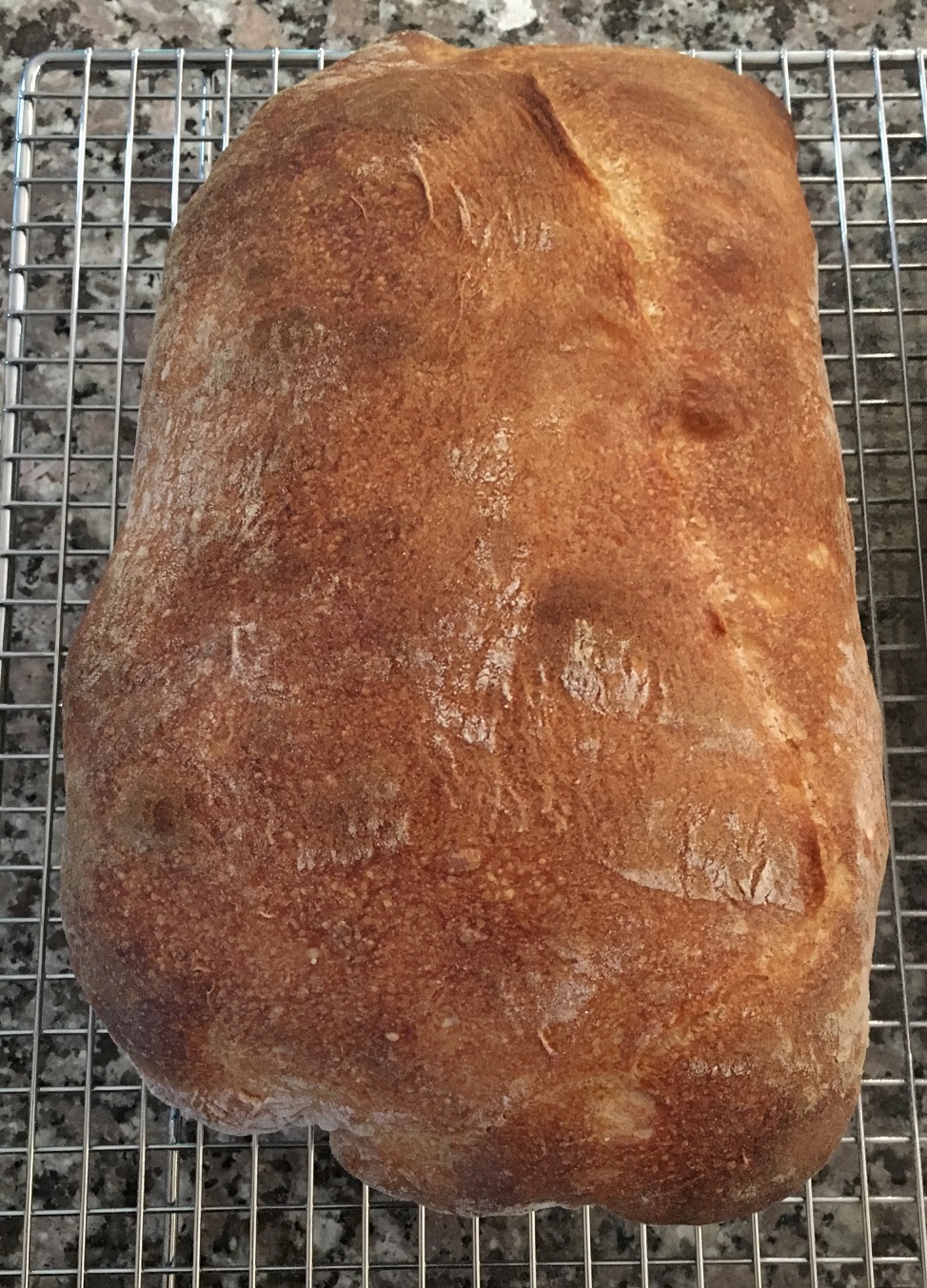 The crumb has a very pillow-like softness with an assortment of large, small, and medium holes.  The crust is nice and chewy (for me an important characteristic of ciabatta). 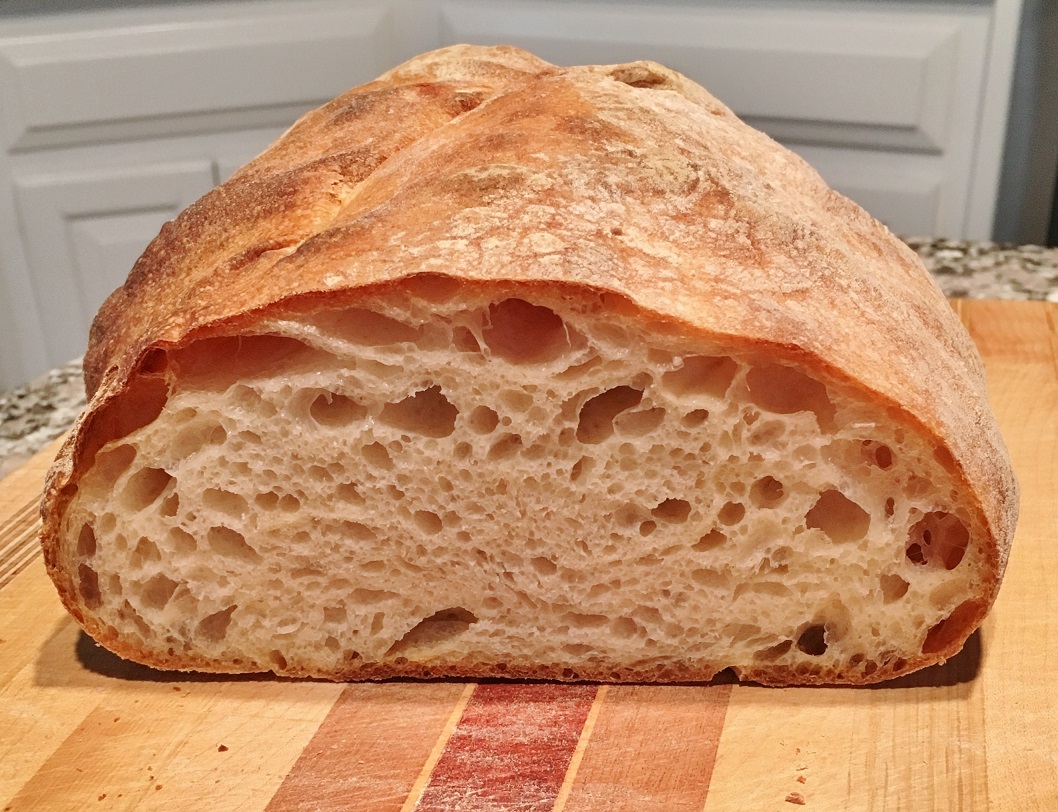 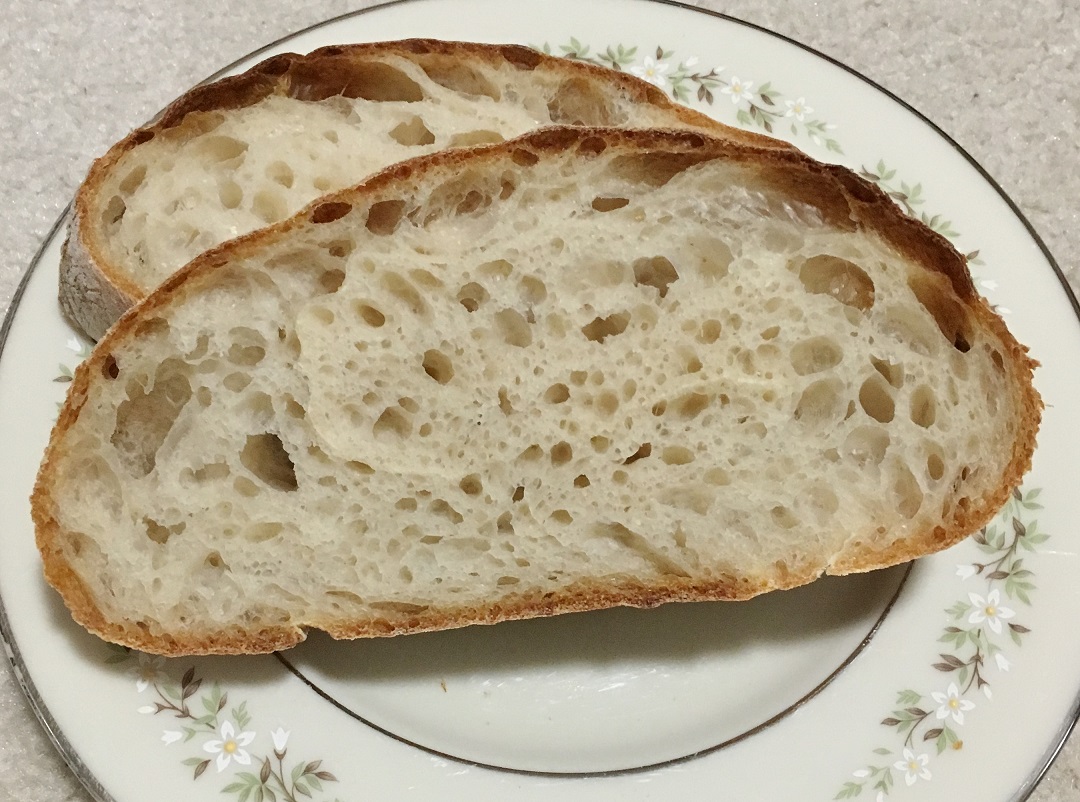 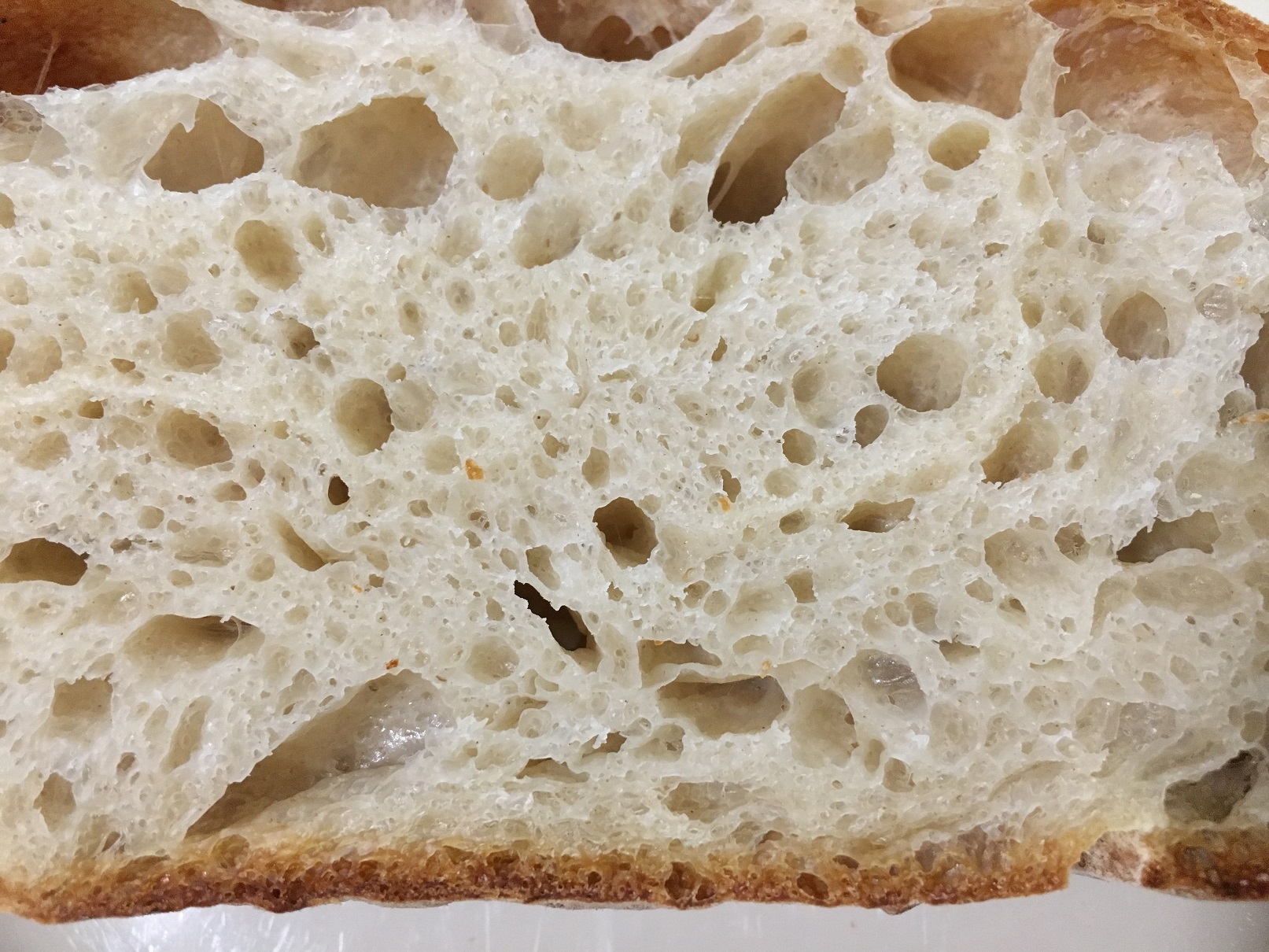 These loaves became a deeper darker brown than any other ciabatta that I have baked, and for me that was a big plus.  It is likely that I could leave the loaves in longer the next time and see how dark they can be.  There was no burning on the bottom.

This is a fun recipe, and the dough has a feel of its own.  Thanks to Alan for posting his bake and giving me another option for ciabatta.