It's been a pretty good day in the kitchen

It's been a pretty good day in the kitchen 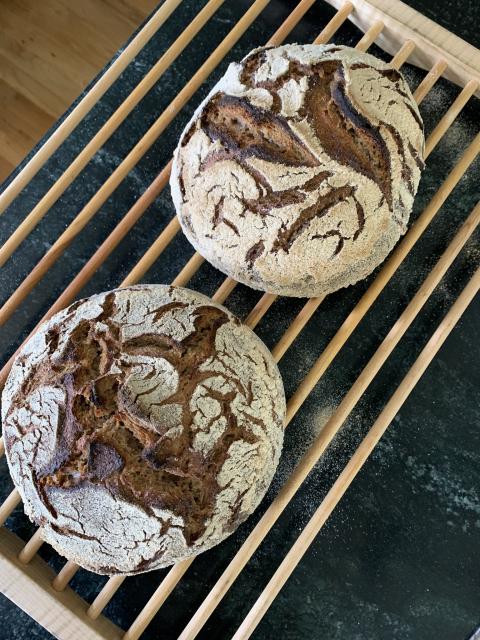 The lead photo is Auvergne Dark Rye from Leader's Local Breads.  While I won’t know until tomorrow how it looks inside, I really like the way the crust turned out.  I expect it will be worlds better than my disastrous first attempt with this bread a few years ago.

The big difference is hydration.  Leader describes the dough as “soupy” but the water quantities (50g in the levain and 350g in the final dough) only work out to 53% hydration.  Something is obviously amiss.  My prior experience taught me that a soupy dough doesn’t work.  Some googling this morning brought recommendations for 475g to 550g of water in the final dough.  After considering it for a few minutes, I opted to use 500g of water.  The dough was definitely soft but nowhere near soupy.

Leader doesn’t say anything about using bannetons for the final proof of this bread, which seems peculiar.  The dough is supposed to be very soft, so why not give it some support for the brief (20-30 minute) final proof?  Since I was already straying from his non-instructions, I figured I’d proof the boules seam-side down and let them fissure naturally, instead of scoring them.  Ah, yes, boules.  Plural.  Leader recommends a single large boule.  From my previous experience, I thought the smaller boules might bake out better than one great big boule, especially at the 500F oven temperature he recommends. Like I said, the appearance is encouraging.  Now to see if the crumb is as good as the crust.

Since I was in the book, I also made Leader's Classic French Sourdough, including the seeded soaker.  For the soaker, I chose millet, steel cut oats, rolled barley, and cornmeal.  Given that combo, I also chose to use boiling water instead of room temperature water.  The thought of cracking a tooth on a millet seed or an oat fragment that hadn’t fully softened before baking even harder just didn’t appeal to me.  Other than adding a quarter teaspoon of ADY to the final dough, the rest of the process went as per instructions.

The batards also turned out well, at least on the outside.  We might get into one of those with our dinner this evening. 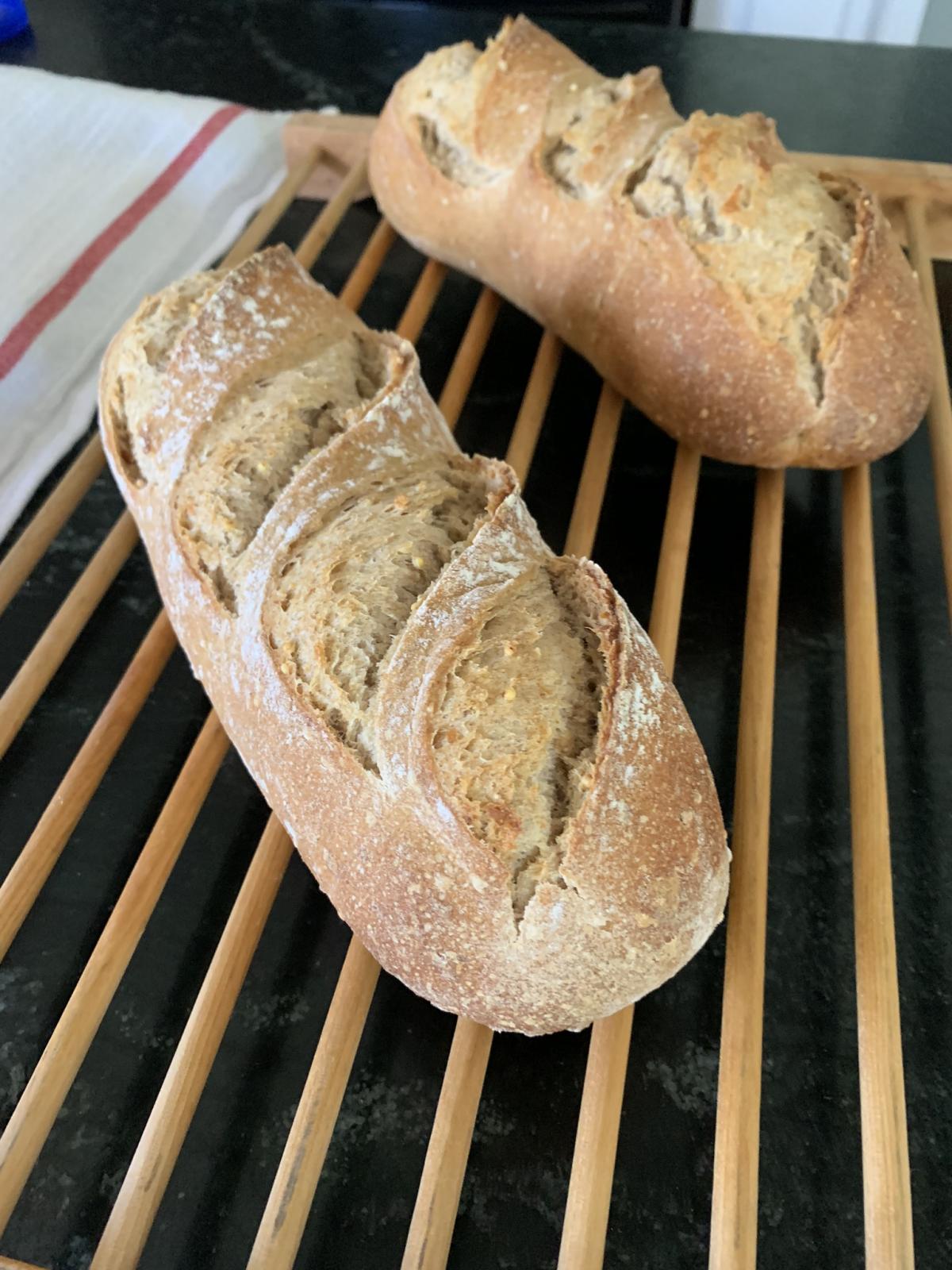 After some recent bakes that ranged from disappointing to frustrating, it feels really good to have two good ones in the same day.

As good as hoped for.

Paul, looks like a couple (or four) winners!  I hope that the crumb on the dark rye meets with your approval when you get around to opening it up.  I need to play with rye some more, I've been in a rut (a good one) lately!

Glad you got some good results out of the oven today, and thanks for posting.  Those rye boules look absolutely lovely!

Yes, the crumb has my approval (see updated post).  And the flavor is good, too.

Love  the look of the boules and hoping yiur crumb looks as good as the crust.  Nice to see your post.

These might just be the prettiest boules that I've made.  I don't think the "natural scoring", for lack of a better term, has ever given me such a nice pattern.

The crumb is pretty good, too, although not quite as eye-catching.

Await the crumb shot with a baited rye breath.

Crumb shot is posted in the original post now.  The crust may be prettier but I'm pretty happy with the crumb, too.  Miles better than my first attempt with this bread.

All smiles on this end.

Everyone of us would go through a period of dark times at some point. Things will feel right again once it's over. Yours seems to have reached its end as evidenced by these two fine bakes :) Love the scores on the batards and rustic crust of the rye. You were wise to make adjustments following your experiences. Not trying to offense anyone but I believe those who never dare changing a formula could hardly excel at baking.

I bet the crumb would be nice. Hopefully we'll get to see it soon!

I'm sure that there have been a number of factors at play in my recent run of nowhere-near-stellar breads.  If it were only one, there might be a chance of diagnosing it.

Anyway, yes, it feels wonderful to have turned out something that is as delightful to the eye as it is to the tongue.

The original post has been updated with a picture of the crumb.

Scoring after my own heart.  The batards look just great.

Weirdly, both the scoring and the proofing were more or less right this time around.  At least one of them is usually wonky, if not both.

Love how those boules open and how neat the batards look. Well done Paul!

There's a colloquial saying here that "Even a blind pig finds an acorn every now and then."  Apparently I did more things right than I did wrong with these bakes and lucked into good results for each.