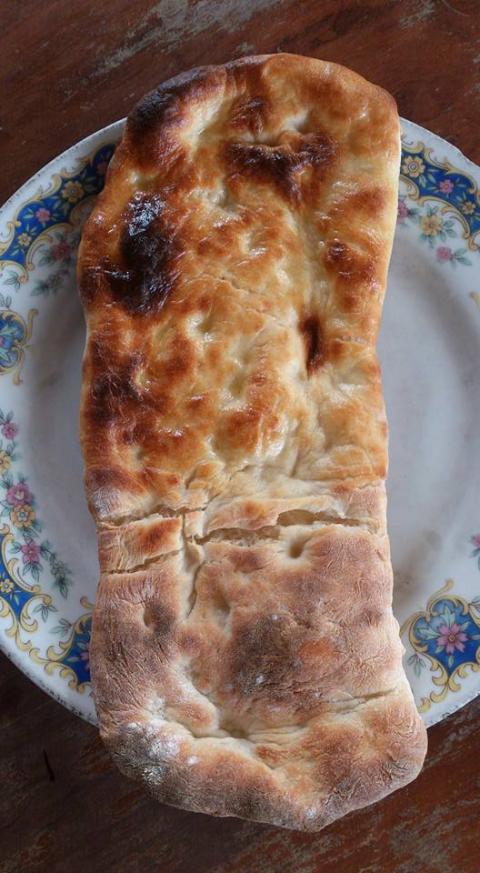 Hi TFLers! Long time no hear! I've been very busy adjusting to my new career that I seldom bake and post. I hope you still remember me. I made this simple flatbread for my birthday and I paired it with homemade charcuterie (sausages in particular). It feels like a very European thing to do but since no one drinks wine or alcohol in our household, we just washed it down freshly squeezed calamansi juice and hot chocolate.

I do not know if I can call this foccacia or schicciata or pizza bianca so I just called it flat bread. It was inspired by the pizza dough made by a bakery in Rome that I watched in the pizza show. The dough is a simple one day sourdough made with AP flour, milk, salt, and a bit of sugar. The levain matured for 3 hours in the morning due to high temperatures then I made the main dough. I did 100 slap and folds for the initial gluten development. I gave the dough 3 sets of S&F's 1 hour apart during the bulk fermentation which took 4 hours. 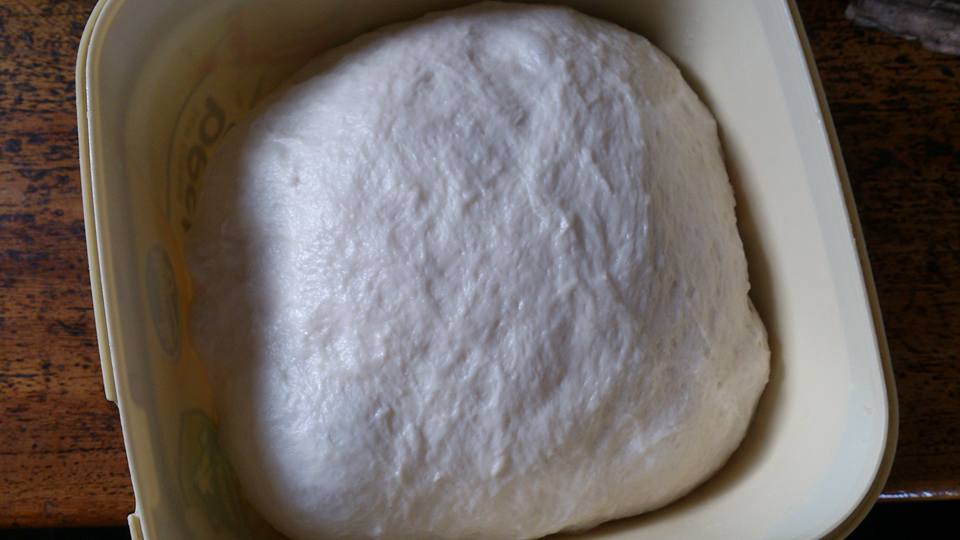 The dough was very soft and bubbly at the end of the bulk rise. I divided it into 2 and flattened it into rectangular flatbreads. I immediately cooked them on skillet for 3 minutes over medium heat then broiled at 250C for five minutes until golden brown and a little charred. 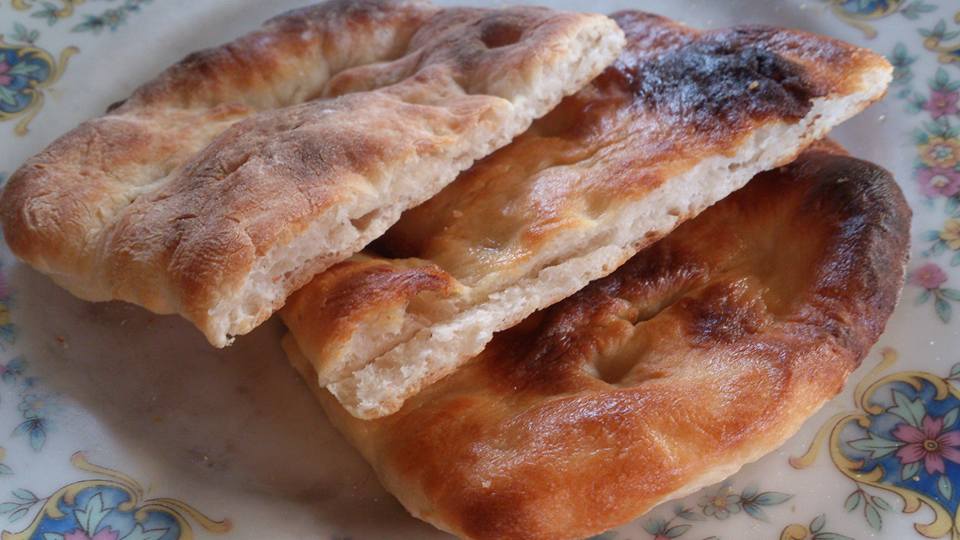 I made a crisper thinner one and a softer thicker one. I brushed butter  in lieu of olive oil over half of the thinner one for more flavor albeit a softer crust. 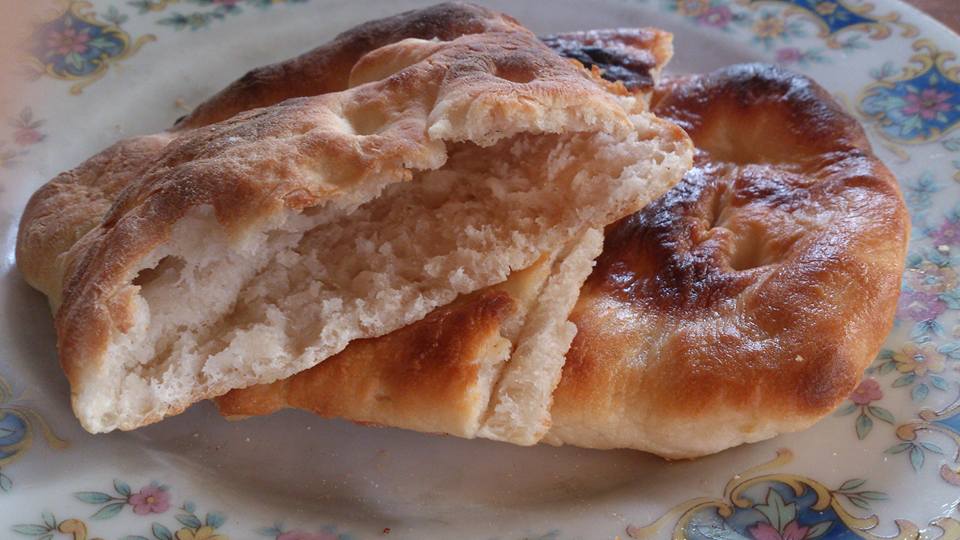 One can make a pocket even in the thin one with just a little force. Sliced it in half and filled it with my homemade dry cured sausages inspired  by the pizza bianca with mortadella and the schicciata filled with cold cuts as italian street foods. 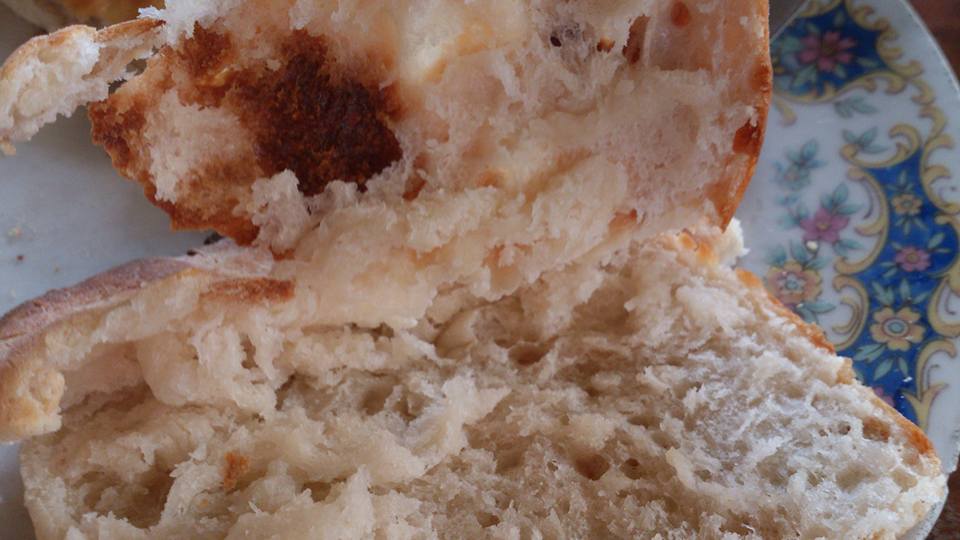 Filled with a sausage inspired by the flavors of Mortadella. 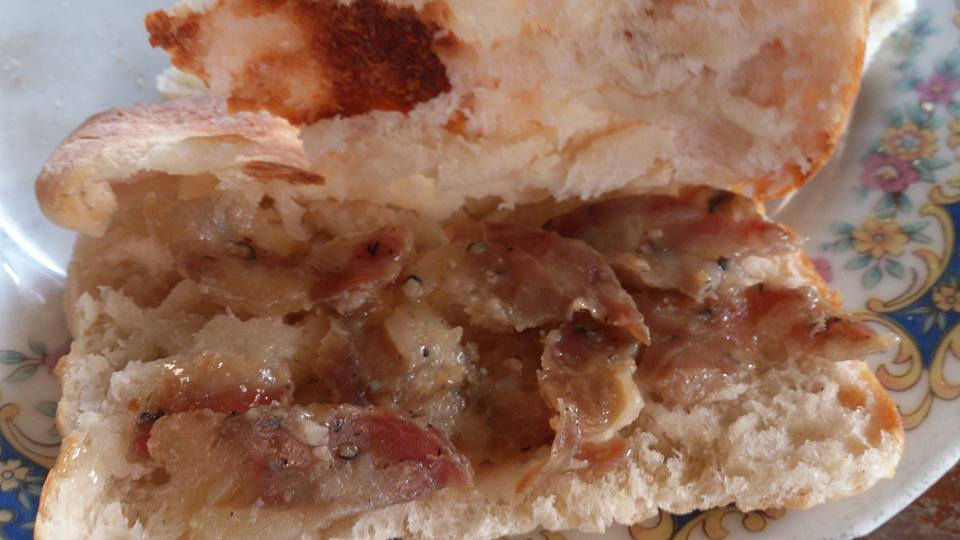 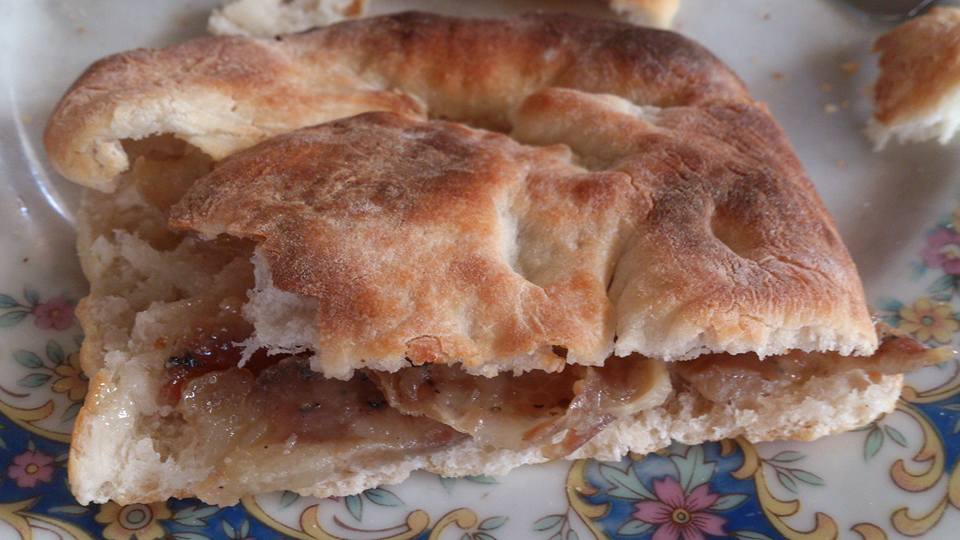 The softer and thicker flatbread. 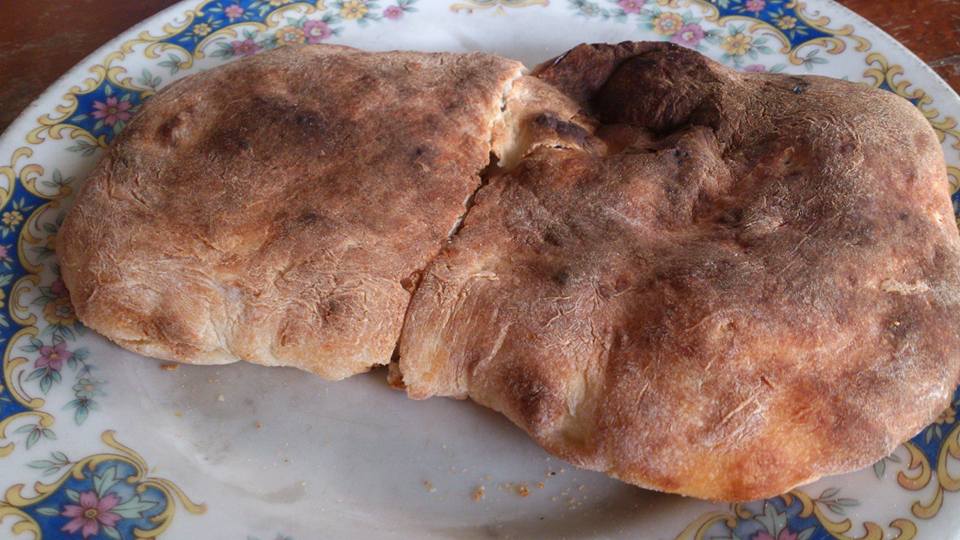 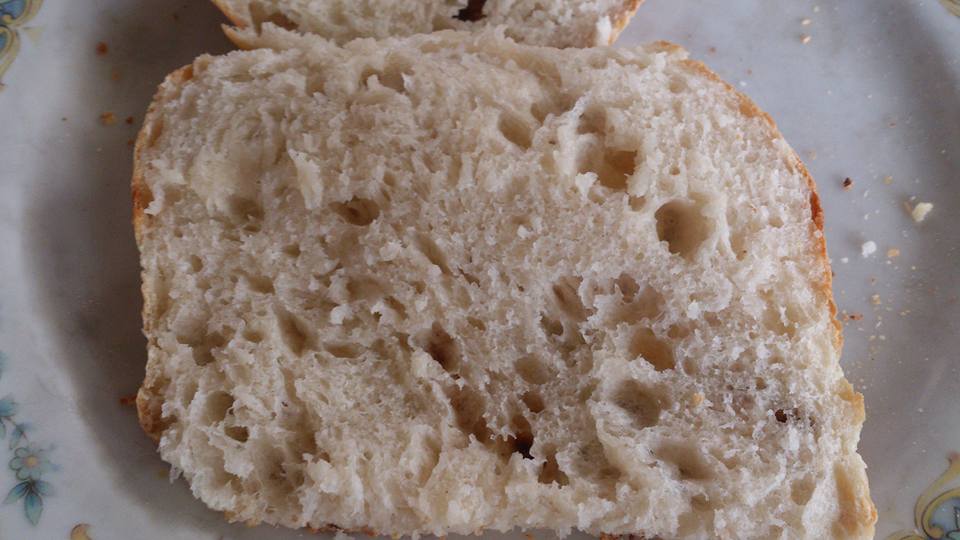 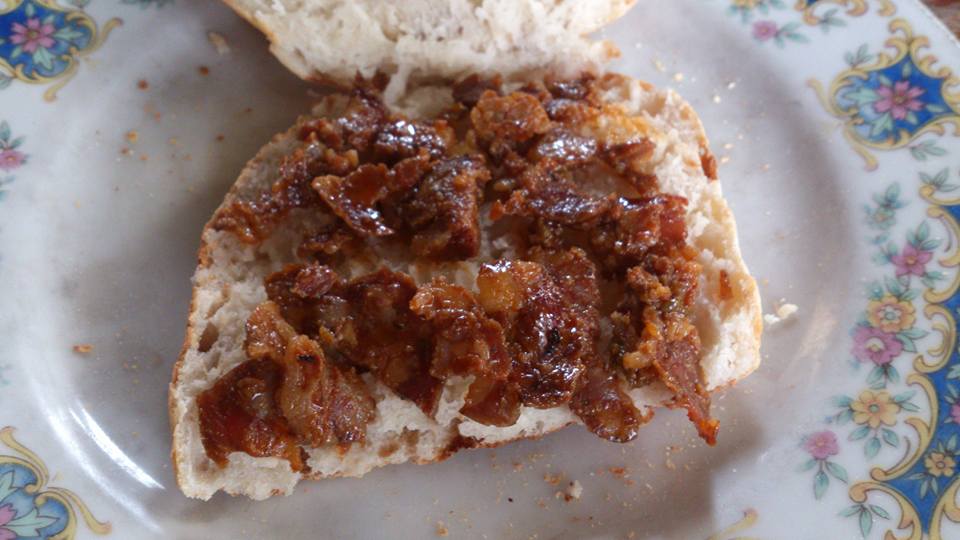 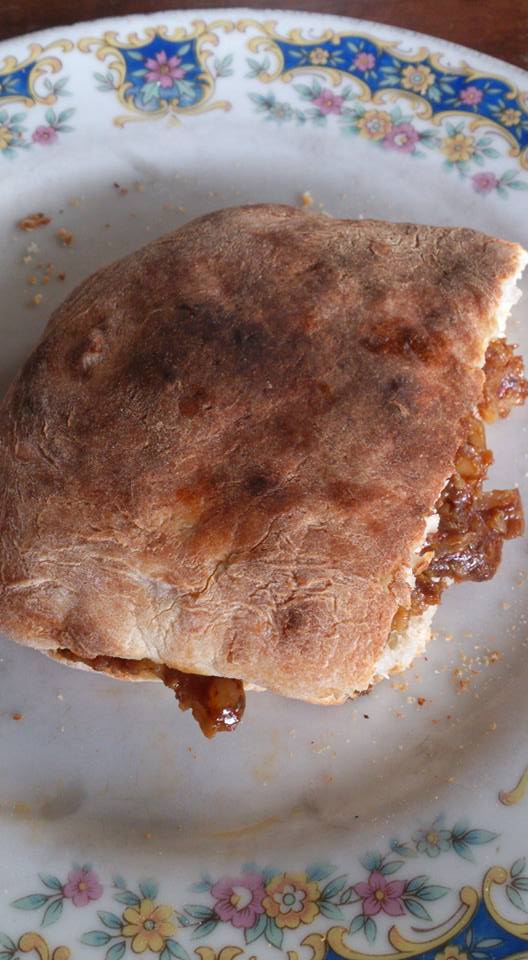 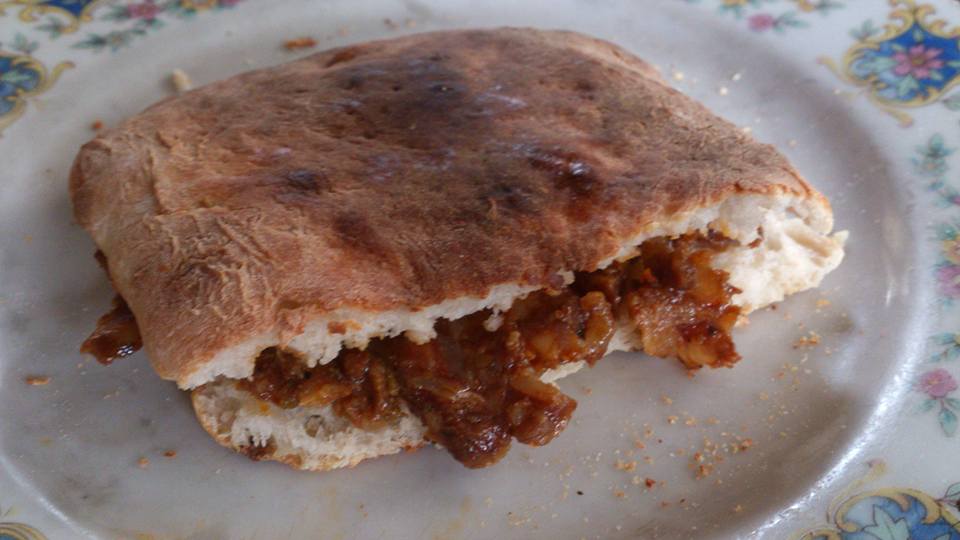 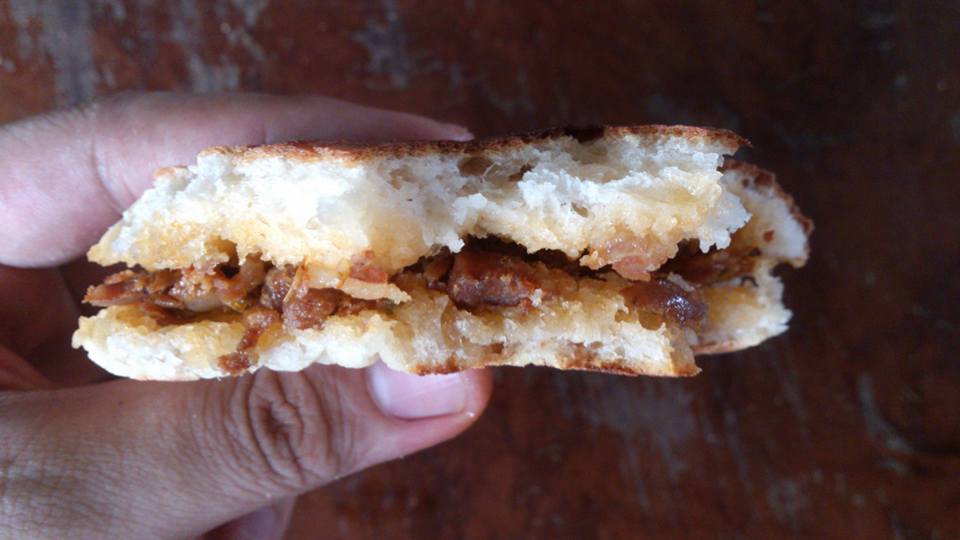 In this simple combination of meat and bread, without cheese, veggies, spreads, or sauces arose a flavor so sublime. Unlike how the sandwiches in those streets with a lot of meat, one doesn't need much here. The cured meats were so flavorful that less is more.

The bread was soft on the inside, lightly chewy, substantial with a good bite and the crust was crispy with a charred aroma that adds to the experience, lightly bitter and plays well with the sweetness and that hint of tang of the crumb. The dough when raw has a tangy, buttery, cheesy aroma that intensified when it was baked. The texture really holds up to the meats. The sweetness and aroma or the milk was very pronounced and helped the crust get that lovely brown color. It really complimented the cured meats extremely well; they elevated each other.

I will now go into detail with the stuff  with which I stuffed my flatbread.

Yes, I added another thing to my arsenal/repertoire: charcuterie. The craft that mystified me for so long; I finally got the courage to try it even without proper equipment like a scale and accurate temperature and humidity controls. Dry cured sausage always carry the risk of botulism and listeria which are fatal so most people won't make it at home, why take the risk? I also only used salt and no nitrates because there is a higher risk of putting my health in danger for putting in too much nitrates than introducing bacteria to my body. But I'm relentless or stubborn maybe so I still went to do it. Again, I do not know if I will be called great or foolish for doing it.

I'm not used to eating raw meat, even though this meats are cured I still consider them raw because they did not go under heat so I cooked them so it eliminates the risk of listeria and botulism where the toxin is quickly destroyed at temperatures over 80C for 10 minutes. I slow cooked these for an hour until caramelized.

I really got confident when my first which was a cured meat from southern China became a huge success. Unlike western charcuterie, the one that I first made is very different through it's use of soy sauce and large amount of sugar. It also uses spices not commonly used in the west. I want to post it but I believe there will be a more fitting post for that one.

Western ones often has garlic which increased the risk of botulism that kept me from trying to make them but I took the plunge finally and I was surprised with results. I really like it even though there was no trace of sweetness, and the garlic was very nice whether applied lightly of heavily.

I originally planned to make hot sausages made with paprika but I decided to also make a more delicately flavored sausage like an old world salami or mortadella.

This one was flavored with garlic, pepper, juniper and bay. Light on the garlic and I included whole peppercorns which added a nice flavor and texture to the finished sausage. The center did not dry that well due to to low of a humidity level. 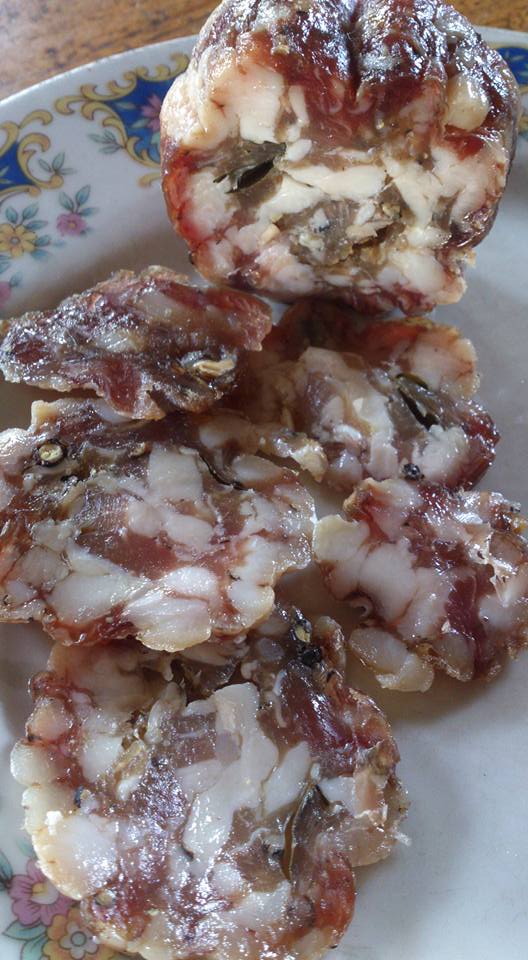 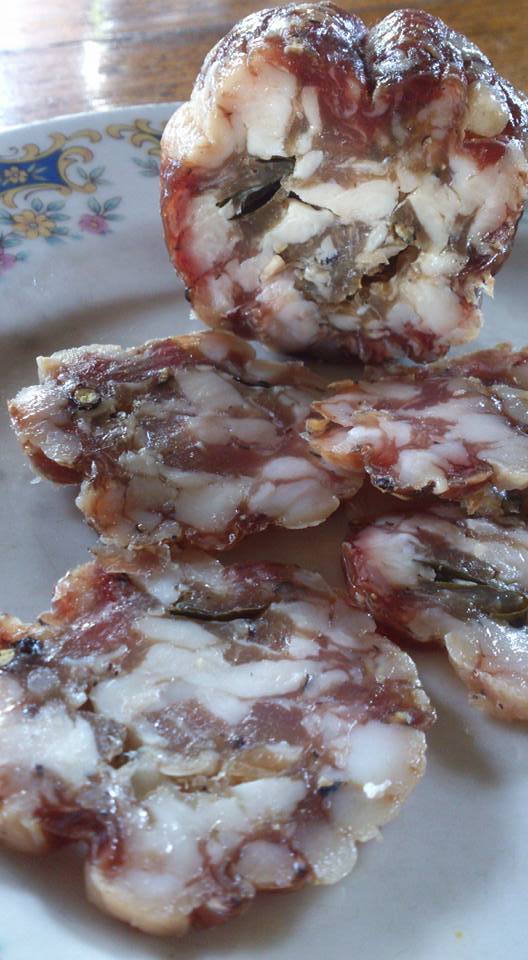 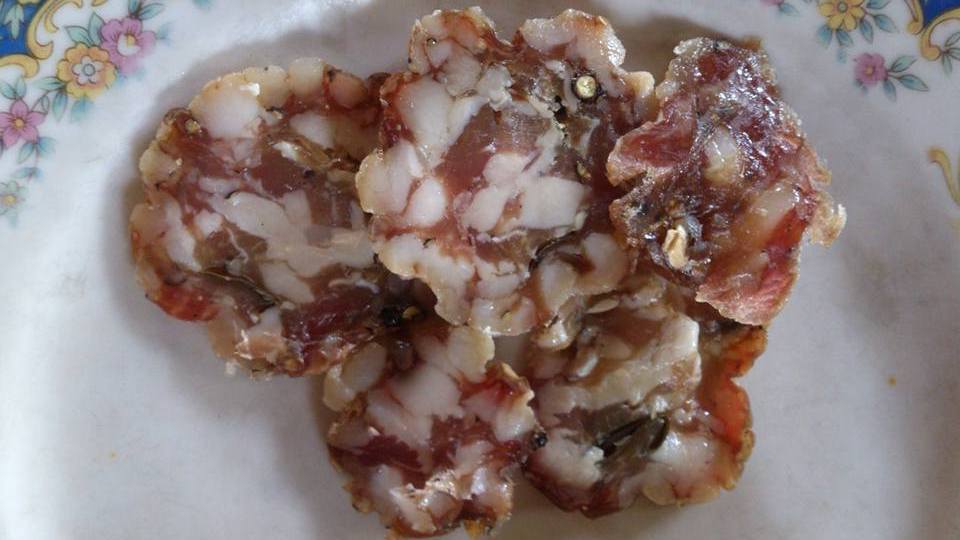 A "Spanish Chorizo" made with Spanish smoked paprika and garlic. I went heavy on the garlic and  I added cayenne to half to make a hot chorizo. 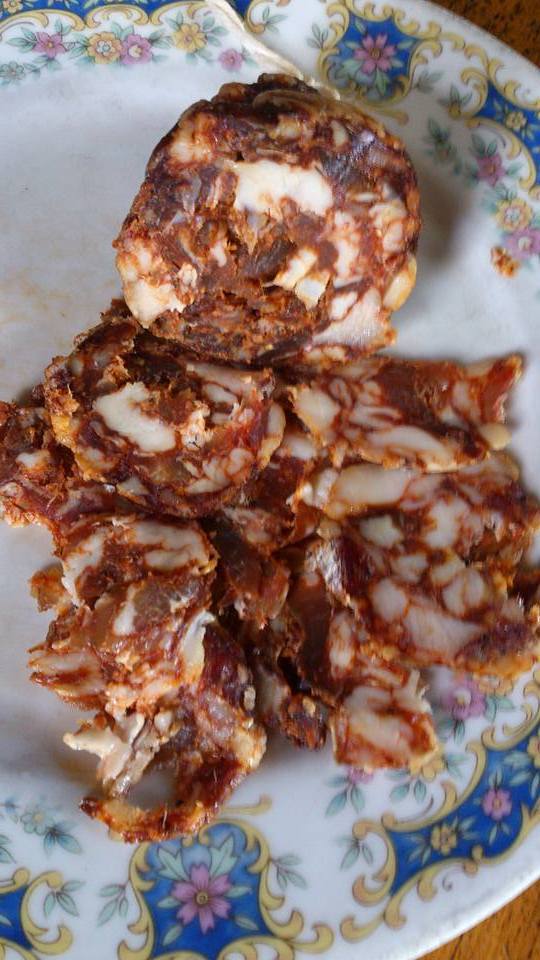 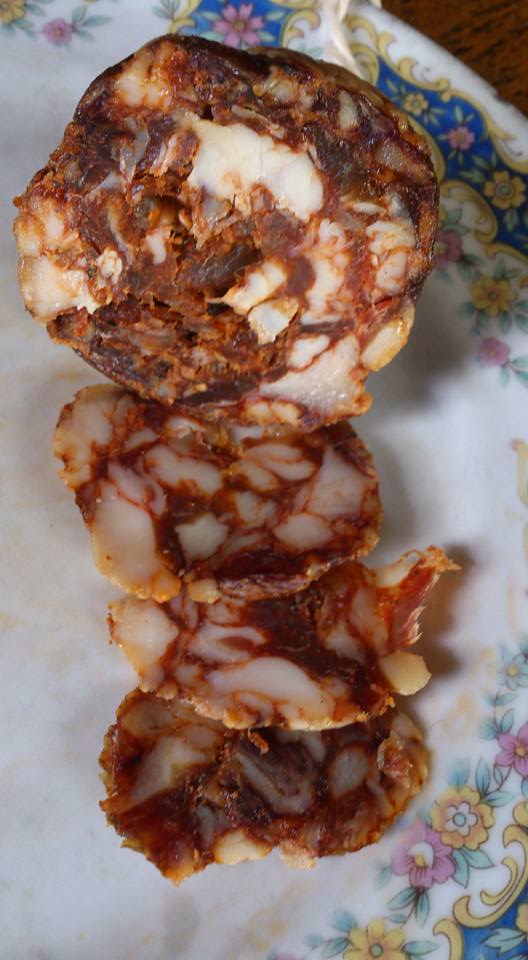 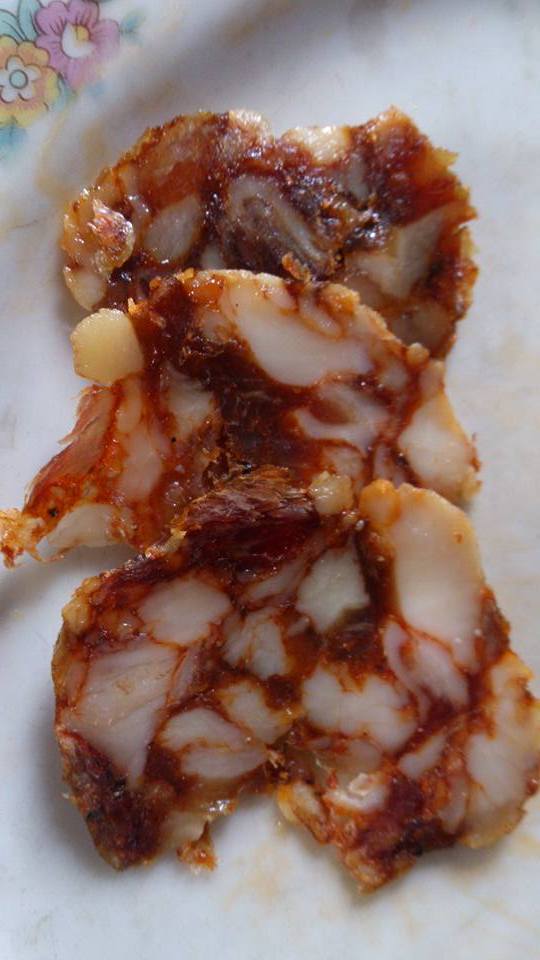 What aroma and flavor! Really beats most "chorizos" I had before by a mile. 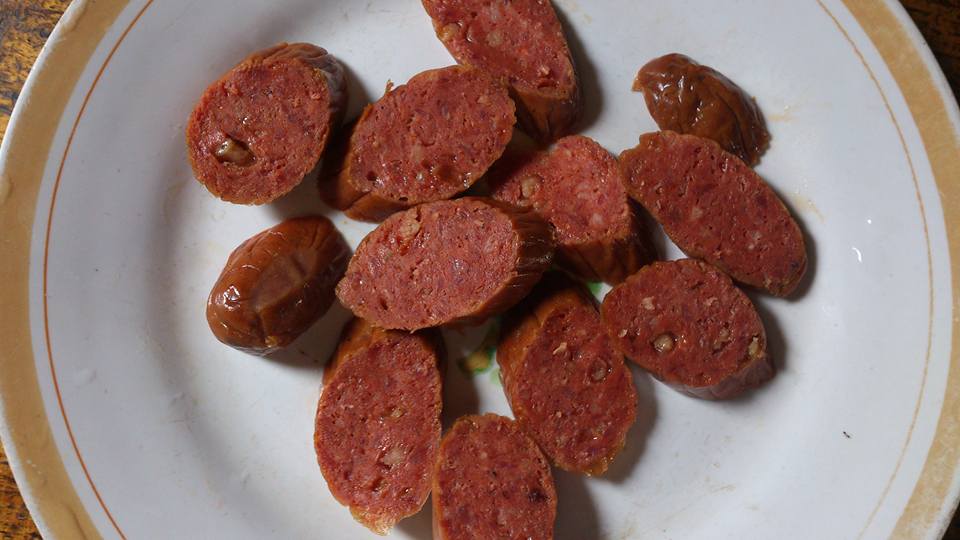 The most decent chorizo that I can buy at the store. 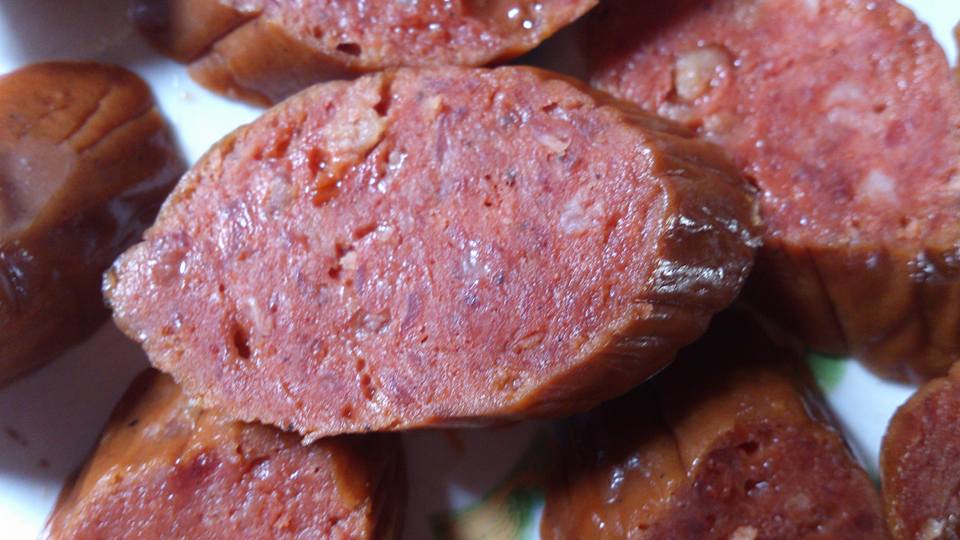 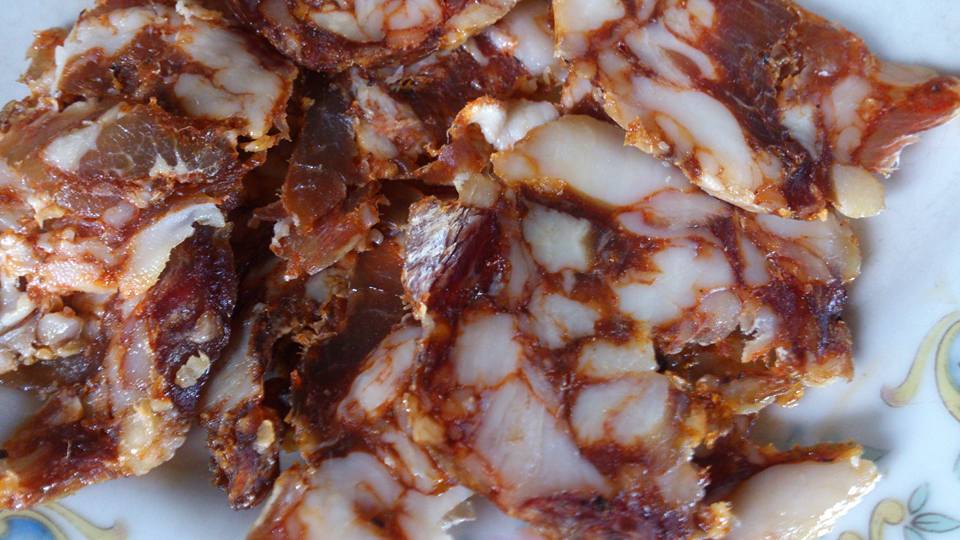 I learned a new skill this year! I plan to learn more. I am looking forward to learning how to smoke these meat beauties of mine. I think it will send them to another level!

I thank God for another year of life and blessing! God bless you all! See you next time.

I was thinking of you yesterday, and here you are! Wishing you all the best, and please visit us when you can. Looking forward to 'seeing' you again!

I love bread of any kind but puffy flatbread with some thickness has to be one of my favorites. Pita, naan, focaccia, pizza, and all kinds of Chinese stuffed and unstuffed bing. How can I live without any of them? The milk should have produced a softer crumb, which is perfect for sandwiching those chewy-crispy sausages.

Spanish chorizo is my top sausage pick, followed by cheese-filled, spicy Italian links and Chinese sausages. The chewiness of dry cured sausages really appeals to me. It gives me another kind of satisfaction not gained when bitten into a springy sausage. I want to attempt homemade sausage but there's no more room in my kitchen for another unipurpose kitchen gadget... Ah and a smoker sounds like a great addition as well :)

Happy birthday and best wishes to you. Hope to see more of your posts!

I love how you accurately described the texture of my sausages without even tasting them! I feel like I'm doing it right. These kinds of flatbreads are my first successful bake in my clay pot. The milk made it softer and added flavor and aroma.

sausages but cudos to you! They look delicious! My favourite sausage is a saucisson sec that the French eat on a regular basis. It’s hard to find something similar here since they are all not hard or dry enough.

And last but not least, joyeux anniversaire! Or like they say in Canada, bonne fête!

Saucisson sec was first choice to make for its simplicity but I can't afford the red wine it needs. However, the whole peppercorns in saucisson became my inspiration to put it in my other sausage.

Making and smoking sausages is one of the fine arts of food that every serious cook needs to learn how to do.   When you make it at home it usually doesn't get better than that and you will have a hard time finding the same quality to buy at a decent price .....that most folks can afford at any rate!  It's part of eating well on a budget:-)

Love the bread and sausages.  They go so well together.  Nice to hear from you and that all is well with you.

The best to you and yours nephew!

Absolutely right, way cheaper and has a much higher quality than what you can find at the store. Maybe, the only thing that will beat it are those traditional charcuterie made in the old world following the tradition of where they originated.

you are an inspiration.  HAPPY BIRTHDAY and thanks for posting and filling us in.

Great baking as always and congrats on the charcuterie.  They all look fantastic and must taste great.  I assuming you have not killed anyone yet, so you must be doing something right :).

Look forward to more of your posts in the future.

Yes, thank God! I still haven't killed anyone. All they were saying was they were delicious!