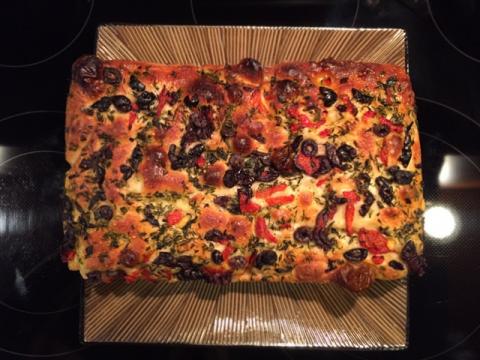 An old west coast friend emailed me 2 days ago.  Her significant other was trying, without a lot of success, to make focaccia.  Did I have a recipe?  My last focaccia foray was probably in 2003 when I was a rank amateur home baker for a short time and  initially experimenting with Mr. Reinhart's BBA but years prior to the existence of TFL.

Feeling my oats, I replied sure, allow me a few days to give it a go.  My first successful baguette dough and to this day still both the easiest as well as one of the most reliable has been the Anis Bouabsa baguette, first baked by me in late 2013.  I figured that this dough would be just dandy for a focaccia base.  And I believe that it is.

With a 30 minute autolyse, bassinage, 300 French Folds, and three Letter Folds at 20, 40 and 60 minutes before retarding the dough for most of a calendar day, it couldn't be simpler.

The Bouabsa formula uses a minuscule amount of IDY 0.16%, as the leavening agent, yet after a mere 1 hour bulk rise, the dough had already grown significantly.  Here it is, having just been pulled from retard. 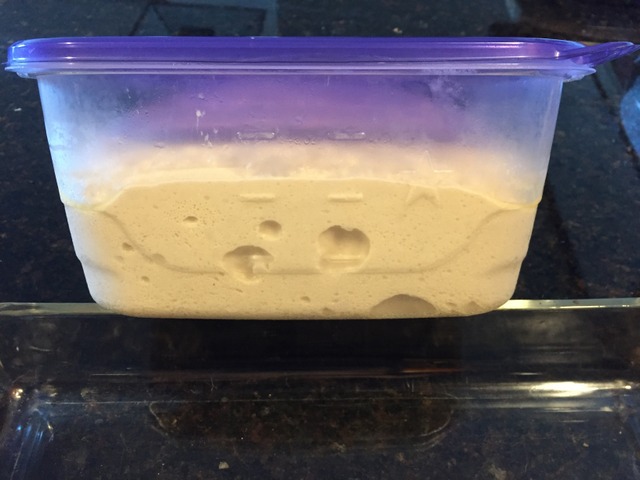 The dough is placed into a moderately well oiled pan stretched to conform to the pan, turned over to coat the other side with oil, and then dimpled. 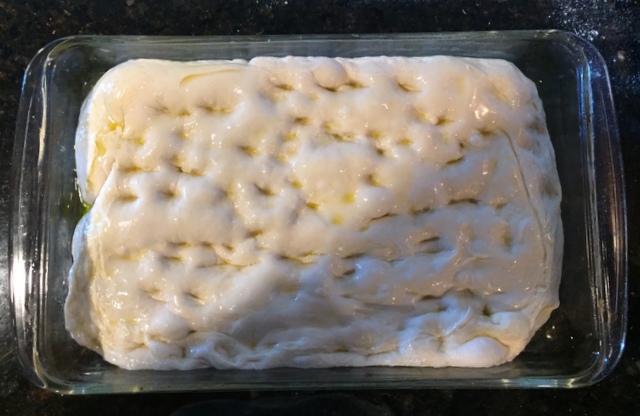 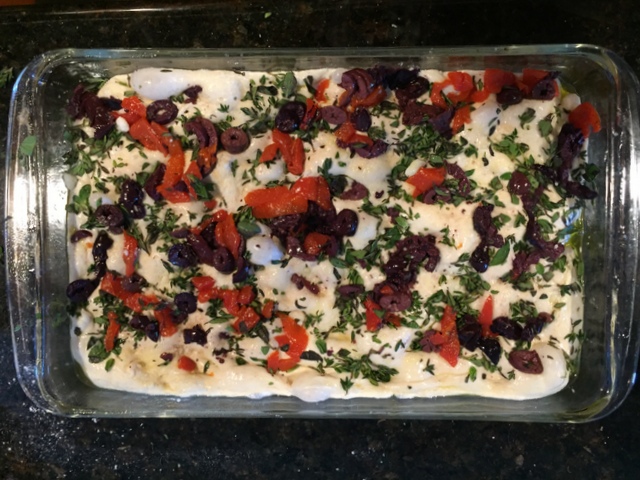 Baked at 450dF for 25 minutes, internal temp 210dF.  No need for a baking stone or steam.  A final drizzle of olive oil over the surface. 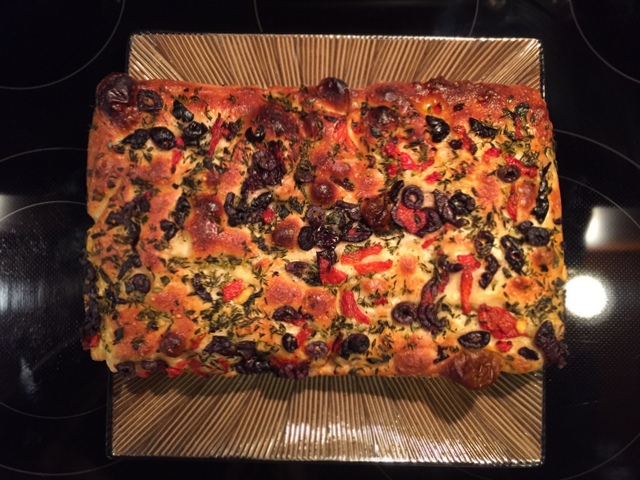 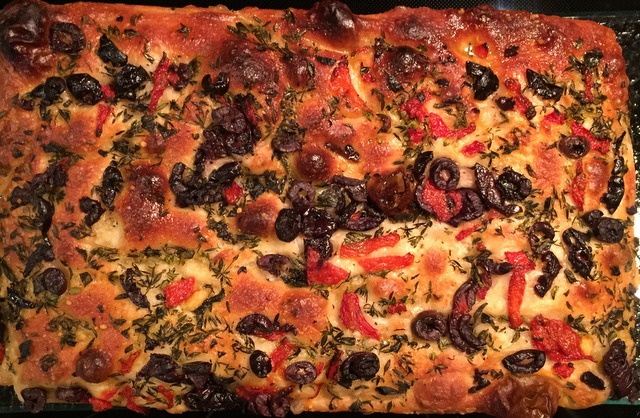 The crumb was just a little more open than this picture shows.  Soft with a good chew, but the overall flavor would have benefited from both more salt and more grated cheese. 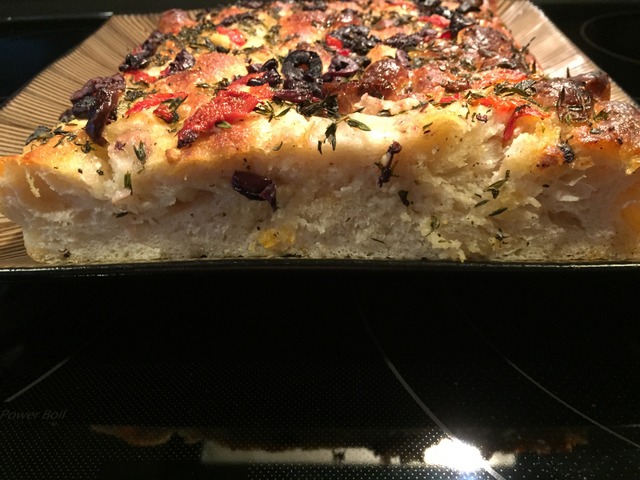 All in all a successful venture considering the length of time since I last made this.  And now my friend has an email in her inbox with these pictures and my more detailed writeup for her beau.

I thought for sure I was going to open this to see foccacia as a baguette! :)  Looks lovely, and may be just what I need for a party this weekend!  Thanks for posting.

I copied the formula from David's collaboration with Janedo, who visited with M. Bouabsa a decade ago.  This mix was scaled to 1000g so it is a little more than the original posted amount.

If you've never worked with so little an amount of yeast in a final dough, it is a revelation at how fast the yeast grows.  The French Folds are quite revealing.  The first dozen or so will have you questioning how this pile of really wet goop could ever come together.  By the 20th or 30th FF, the character of the dough is already transformed.

I'm quite certain that there are a lot of "legit" focaccia formulas out there, probably most have olive oil incorporated as an ingredient in the mix.  However, I was looking for the quick and valid solution for a "problem" to provide my friend.  And as stated, the Bouabsa dough is perhaps the easiest we will ever see for an autolysed, commercially yeasted and mixed dough.  Amazing that a 1 hour bench top bulk rise can be sufficient before retarding.

Good luck and have fun.  Considering that it's been something like 16 years (and a million miles ago) since the last time I did one, I was a little surprised at how well it came out.

Thanks for the confirmation on the formula.  I've made a few foccacia, so I definitely recognize the differences in formulas, but this looks like a fun variant to try (and your results are very enticing!) :)

days ago on the grill on a stone using a jelly roll pan using a bit of IDY and it was  pretty wet mess at first too.  It had cheese and the normal pizza toppings and looked like this I'm sure one time at about the 3 minute mark but by the 5 minute mark it was totally burned on the bottom.  Yours looks better and had to taste better for sure.'Nice to see you branching out to Italian breads closer to your heritage:-)

As I mentioned above to Rich, this is no "traditional" focaccia dough, so there is likely a lack of "true" focaccia taste, if there even is such a thing.  Our two compartment stove houses the granite baking deck in the lower main compartment, but this was baked in the upper oven on a regular oven rack.  I likely overloaded the poor thing with too many additives in my gleeful zeal.  Whenever there is a next time, I'll stick to fewer things.

During my early-60's JHS years in the Bronx, we had to take a city bus to school and therefore ventured into a new kinda distant neighborhood where we somehow stumbled across Enzo's Pizzeria on Westchester Ave.  Enzo has this thing called a Sicilian pizza, rectangular, divided into 8 square slices, each of which sold for 25 cents.  Quite a bit above the typical 15 cents for a regular slice.  None of us had ever seen such a magnificent object before, although not too many years down the road the cat was out of the bag and every other corner joint was offering it.  The loft of this focaccia dough does remind me of Enzo's work of art, and so I don't think that M. Bouabsa's dough suffers too much in comparison to an actual  focaccia or pizza dough.

Two vaguely related items that may remind you of youthful years back home.  Somewhere in 2 few blocks between my JHS and Enzo's once existed Joe Valachi's Italian restaurant, "famous" for the incident where a henchman of Vito Genovese lost his, um, jewels and then his life one night after closing.  The same Valachi, very early in his career was the man who spotted enemy crime boss Joe Masseria entering into an apartment in the once tony Alhambra Gardens buildings around the corner from where I grew up.  Ah, the good old days.

and before your most recent post I asked the wife if she'd like me to make a Sicilian style pizza for dinner in a few days.  And so I will, sticking to the Bouabsa dough formula, although she'd like the dough to have less loft, hence less dough in the same pan.  It likely won't be an Enzo's or even a dabrownman's, but at least for the former no cement shoe bodies to deal with and for the latter, no 5 alarm fires.

It was still delicious because of the 3 cheeses, sausage, pepperoni, Porcini and crimini mushrooms, red bell peppers, red and green onion with the Thai Basil garnish.  The fresh sauce was also grand but remember to drain off some of the extra liquid.  It is one if the great pizzas from Italy even if not thick or thin.  I'm having left overs for breakfast but it is way too early for some Chianti for non Italians:-)