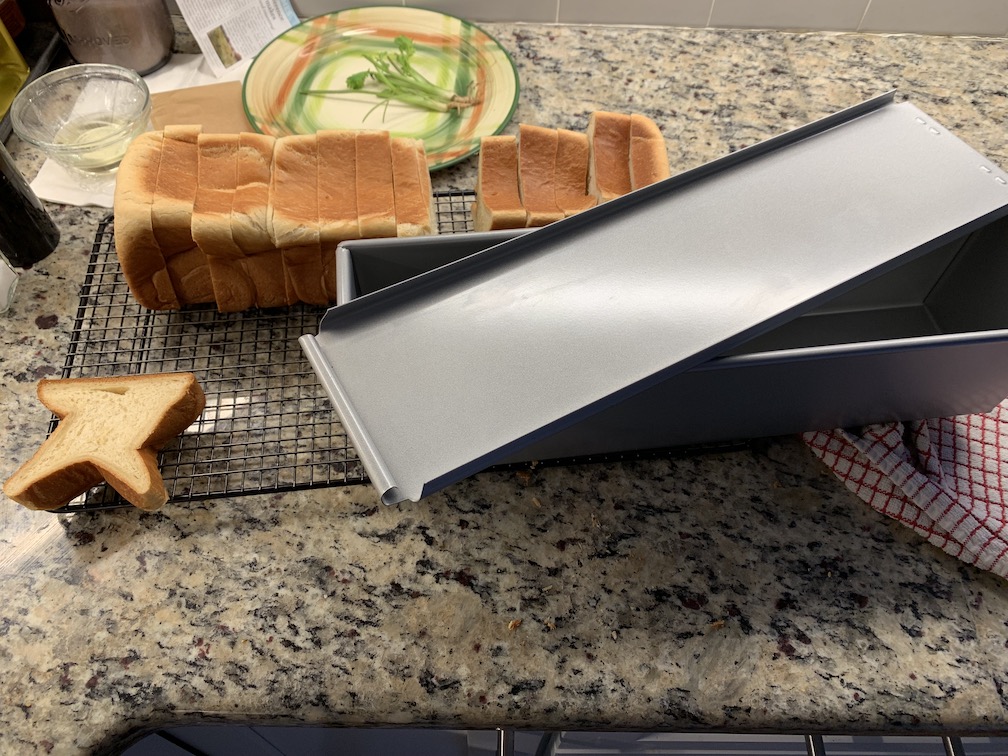 Hi. I moved about a year ago, and I felt like I went from an expert home baker, to an awful baker. Here's what changed:- San Francisco (dry, cold, 0 elevation) to the suburbs of Boston (usually humid, extreme temperatures, ~300 feet elevation)- GE Profile electric oven to a GE Monogram built-in electric oven Other than that, not much. And to me, I would think those changes don't matter, but I list them in case someone thinks otherwise. Attached is a recent problematic example of a baking failure. I used the goldtouch williams-sonoma pan, and out came pretty good bread (it's Hokkaido milk bread if that matters). I used the aluminized steel pan, shown here:https://www.amazon.com/gp/product/B004DDNDUY/ref=ppx_yo_dt_b_search_asin_title?ie=UTF8&psc=1 (Both were the same dough, made the same way, in an oven on Bake (not w/ convection on), and cooked at the same time for the same length of time. I also used a thermometer on each and ensured both had an internal temp of >190F.) With a cover. It was a failure. See the "Z" shaped bread. What went wrong? (On a side note, I like the idea of the longer pan w/ a cover, because then there isn't a top-crust. However, the bread came out Z-shaped, which is pretty problematic for obvious reasons.) Help. Thank you!

Regarding changes: moving from one GE electric oven to another GE electric (assuming they're fairly similar size) is probably not important. Unless one of them had a wrong thermostat, but that would be obvious from Day 1. BUT... Have you been forced to change brands of flour? Or maybe bought "better" flour this time, because you wanted top-notch results?

Have you bought a new bread pan since you moved? My Matfer pullman pan produces straight sided loaves but thinner pans containing the same dough, in the same oven, at the same time, side by side, produce loaves with the same profile as yours.

Hmmmmm. Thicker pans are probably slower to heat up, but also probably stay hot better. Thin pans don't "hold the heat" as well. But it also depends on whether the thin and thick pans are or are not made of the same metal.

It might be as simple as turning the oven up (or down??) a few degrees, to make the thinner pans work right.

after removing from the oven?  Steam from the loaf can soften the crust if it doesn't leave the surface right away.  That includes placing the loaf on a rack with plenty of space under the loaf.

Can both pans hold the same amount of water?  Do both pans have the same color or is one darker?  Oven temp?

Were they longer than previously?

not enough dough in the pan.  The dough has been proofed beyond the strength of the loaf's ability to keep its shape.  Increase the dough amount for the larger pan size.