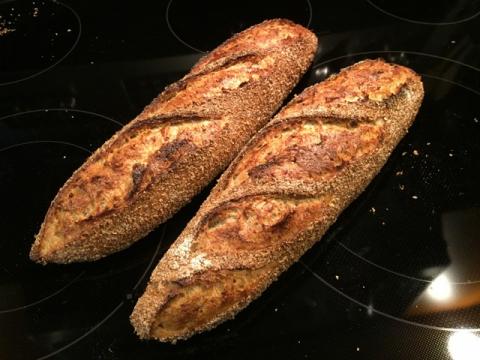 Edit 5/18/2019 - And a second run with my adjusted formula to make sure that I understood the process, and because it's a darn tasty bread!  Changes applied: 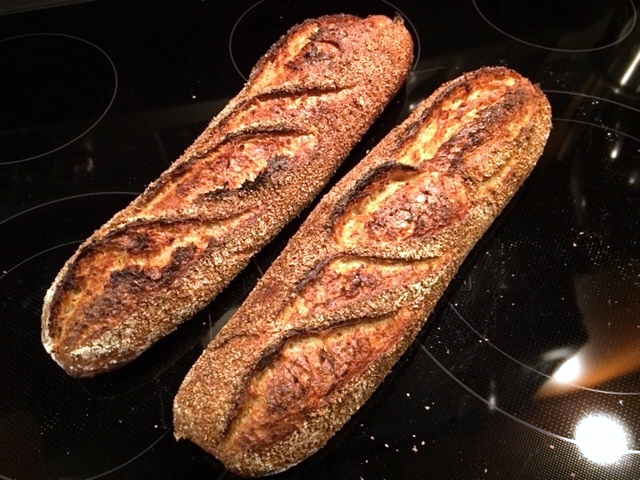 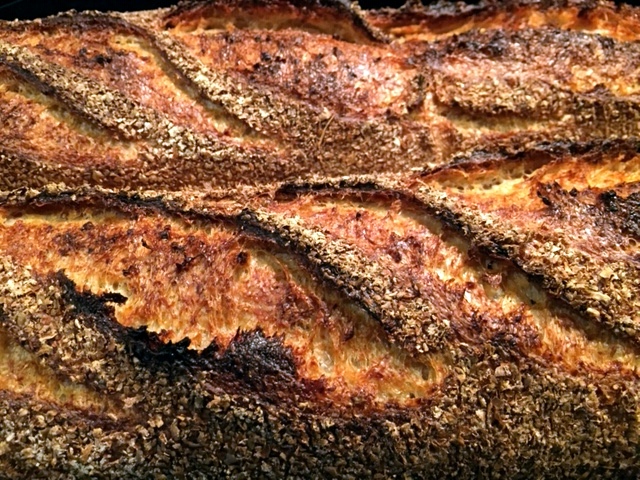 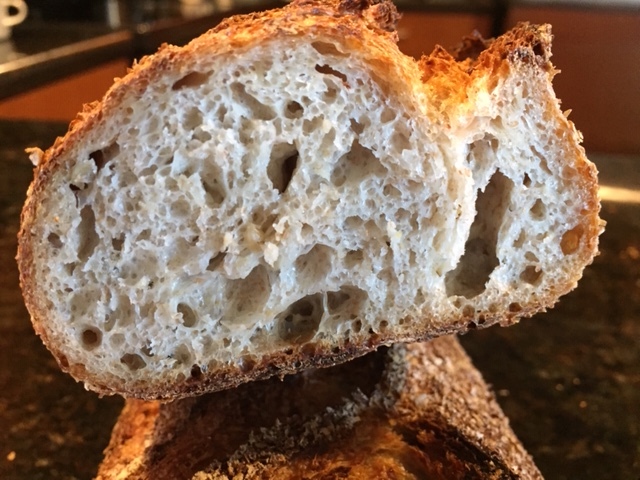 I was out of state these past weeks when suddenly Dan sneakily posted his Community Bake behind my back.  I’m not big on “challenges” and typically don’t join in as much as I do join in. But there has long been chatter and postings of porridge breads by quite a few of the crew here on Isle TFL, both respected old timers like Ian as well as some of the fine young fillies and colts. Having never incorporated porridge, I though that this would be a fine time to give it a go.

I generally try to use what’s already in the cupboard, which in this case was my supermarket branded quick oats.   But for this venture I went with the recommended BRM (not thick).

As with Paul’s comments about the consistency of the 1g:2g ratio, “About 5 minutes in, the porridge starts to firm up, losing any resemblance to “creamy” or “loose”. “, and as with a good number of others in this exercise, the words creamy texture were a unknown inside of my sauce pan.

The ratio turns out to be a 1:1 volume, but the typical volume measurement for oatmeal is 1:2.  So I did that.  And in my first run, I used that 1:2 volume – which naturally made the entire affair tip toward the goopy side of what dough should be.  Here are the two side by side.  Left is called for in the formula, right is by the oatmeal package instruction.  And even these did not turn creamy. 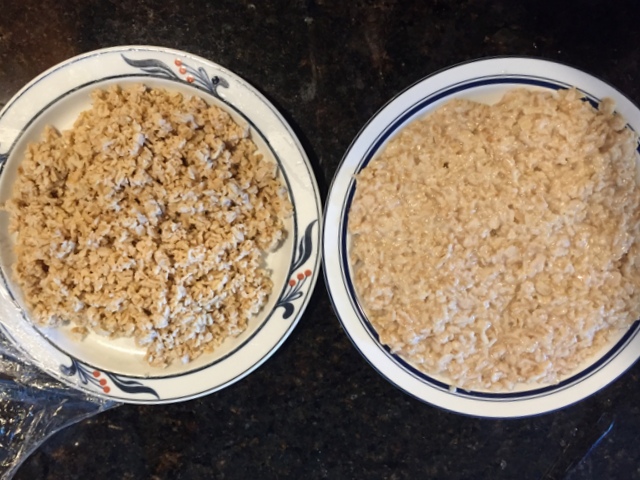 What this reminded me of is the wonderful “magic grits” scene from the movie My Cousin Vinny, and I‘ll quote the relevant sentence here: “Perhaps the laws of physics cease to exist on your (Maurizio’s) stove”.

Way overhydrated, I was still able to eke out a semblance of a bake, and the bread was delicious 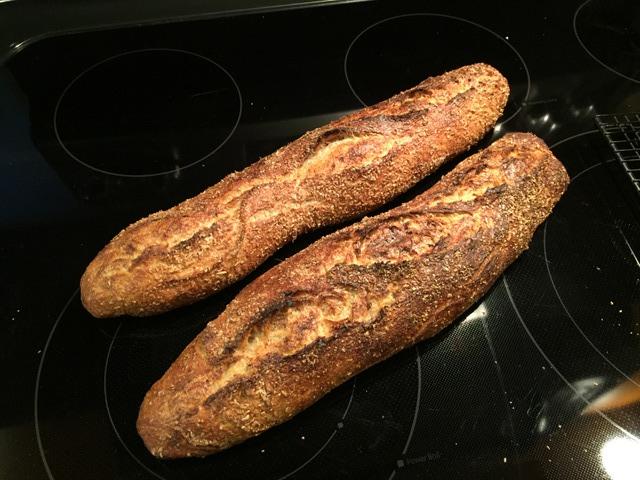 On this second run, I made a few changes:

Left: just after releasing steam.  Right: about to pull from the oven 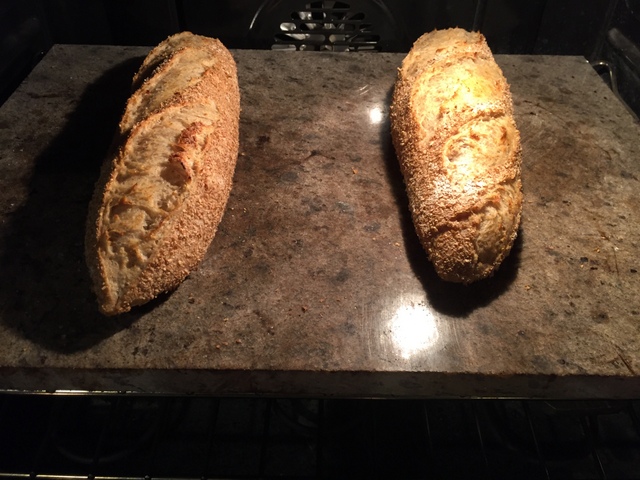 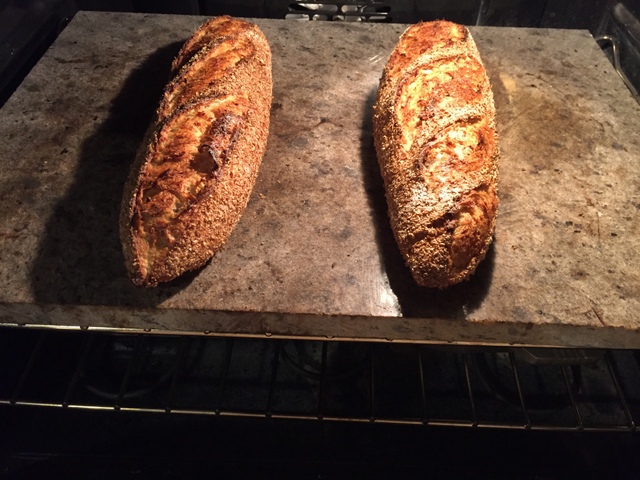 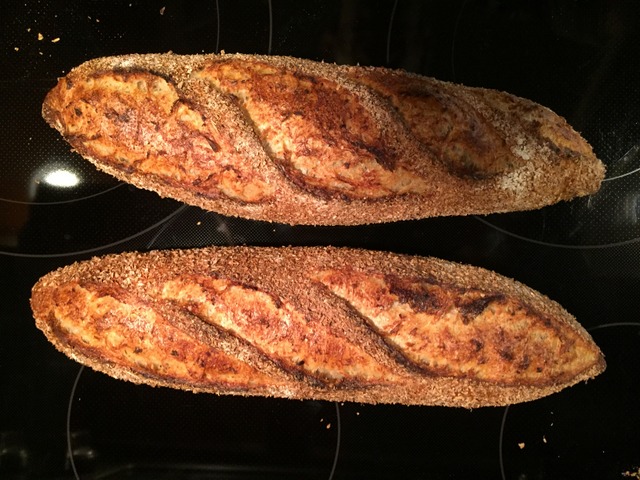 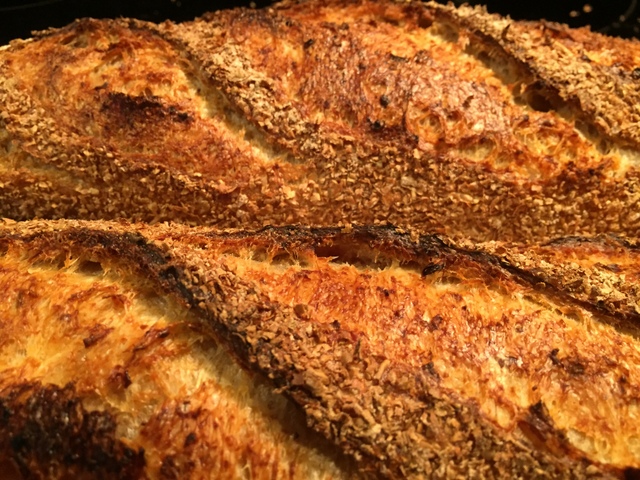 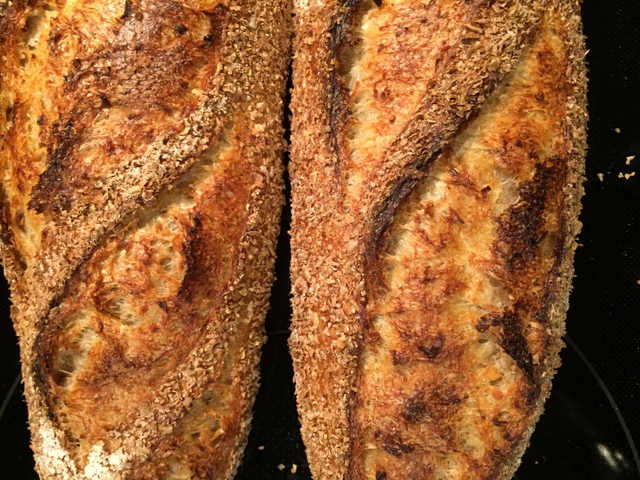 They didn’t grigne as much as my typical baguettes, but I am not surprised at all given the unique characteristics of the dough. 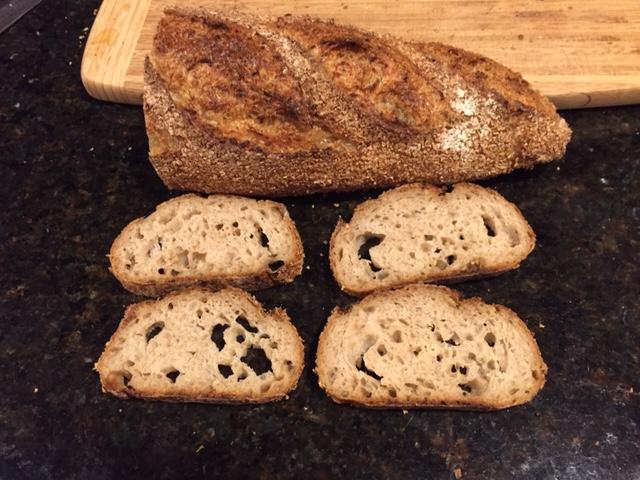 Here is my (BBGA) version of the formula, also normalized for 1000g

Ricing the porridge sounds super. A great benefit of Community Bakes is the innovative ideas shared when everyone is focused on a single type of bread. For example; someone on the CB used a double boiler for their porridge. I’d like to give that one a try. And the potato ricer for sure...

Alan, even when you approach a bread that greatly deviates from your norm, you still produce your “signature” bread. Artist sign their paintings, but some bakers leave their mark.

Al - you're breads all have a signature style that's uniquely you. I'm tempted to give this one a go as well. Looking forward to the crumb shots! frank!

We need all the help we can get, Frank :D

Please do join in.

Was just looking at Maurizio's recipe! Will let you know. Thanks..

Well, from a head on shot, no.  But from a profile, there is a slight resemblance...

Yes, consistency is something to strive for.  I found that my baguettes seem to not respond well to hydrations above ~75%, just too wet and extensible.  With this particular dough, the added (over) hydration from the porridge made the task all the more challenging.  The ship was righted when I applied the "appropriate" changes.

Give it a go, but watch for the clumps in the oatmeal, as most have found.  A potato ricer was the solution for that!

bake and I don't know how you managed to score those sticky and coated baguette porridge loaves..never mind getting them shaped in the first place.

it's mostly a matter of practice and paying attention.  Something you should be well aware of considering how far you've come along this past year or so.  Your breads are fairly consistently outstanding looking.  Even if I don't comment very much these days (a little burned out on that front) I do keep a close watch for many of the fine breads showcased  on TFL these days by a slew of others too.  Old hands like Ian and David Snyder and many more as well as the new rush of freshmen and sophomores around here.

Considering the overall hydration, which I'm really not sure about due to evaporation of some of the oat water as well as whatever moisture the oat retains that it doesn't give off, I was attentive to scoring at a pretty sharp angle.  For my typical 65-70% hydration doughs, I can be less strict about the angle of the blade and go in at ~45 degrees vs. something like 30 degrees for a wet and heavy dough such as this.

By just dropping the base hydration down that 2.8%, the dough became quite compliant, happy to report, and I feel that the final letter fold just before retard helped to add a little more strength to the dough.

are important and you speak wise words...Thank you so much for your kind words and it made me actually go back to hunt for my very first post here on TFL back in January 2018 with the heading: "Over-proofing, under-proofing sourdough or just bad shaping...what does it look like?"

Still learning about all of that but this site is a bit of a diary and lovely to look back and see how the loaves look not quite like that anymore...ha. ha.....I am sure my family is also glad of it...The community here certainly helped me to persevere and not to give up!

Interesting what you say about the angle and hydration and must try that. I have not much ventured into baguettes apart from an initial bake as I wanted to focus on 'basic' shaping and scoring first...My next project is to get that beautiful oval batard shape with tampered ending and then proofed en couche. I probably will have to drop the hydration for that and in a way this probably will lead to baguettes eventually... Key I find is getting the tension right for me  and you clearly are a master of that...oh and many other things of course!   Kat

but a master of none.  Well, except for arranging my sock drawer and taking out the trash.

I'll take the compliment although it really applies to so few of us around these parts, maybe just about no-one save for the long term experts.

I'm about to shape my second batch of tritordeum based baguettes now and so we'll see how "masterful" these turn out.  The dough went into retard feeling pretty darned good, so I'm hoping for some good results when I bake them tomorrow.