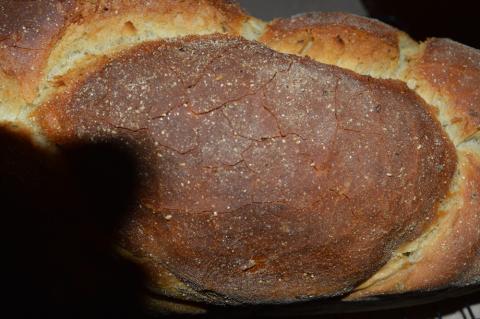 This loaf is destined for my living longer living stronger  keep fit class tomorrow morning. My wife gave me some rosemarie  sprigs that she broke off whilst re potting her Gallipoli Rosemarie, i was to see if i could get them to strike.I had a fair few leaves from the preparation that i subsequently chopped up and decided to add them to a loaf,  and this is the result. Its a dried yeast loaf with 10% potato 5 % carrot and 1% Chopped Rosemarie. it smells divine  the smaller loaf is for our instructor who will be unable to join us for our after class coffee session  as she has another class of oldies. 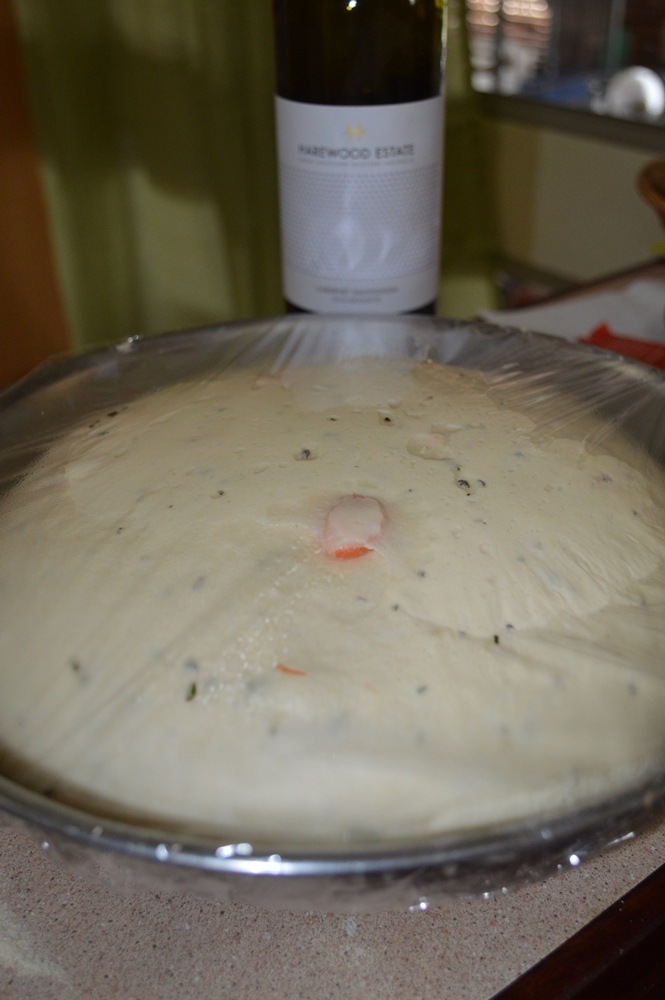 Fermentation almost complete, and a very important ingredient for the dough maker in the background  Harewood  Estate  Cab Sav  from the Great Southern  of Western Australia, 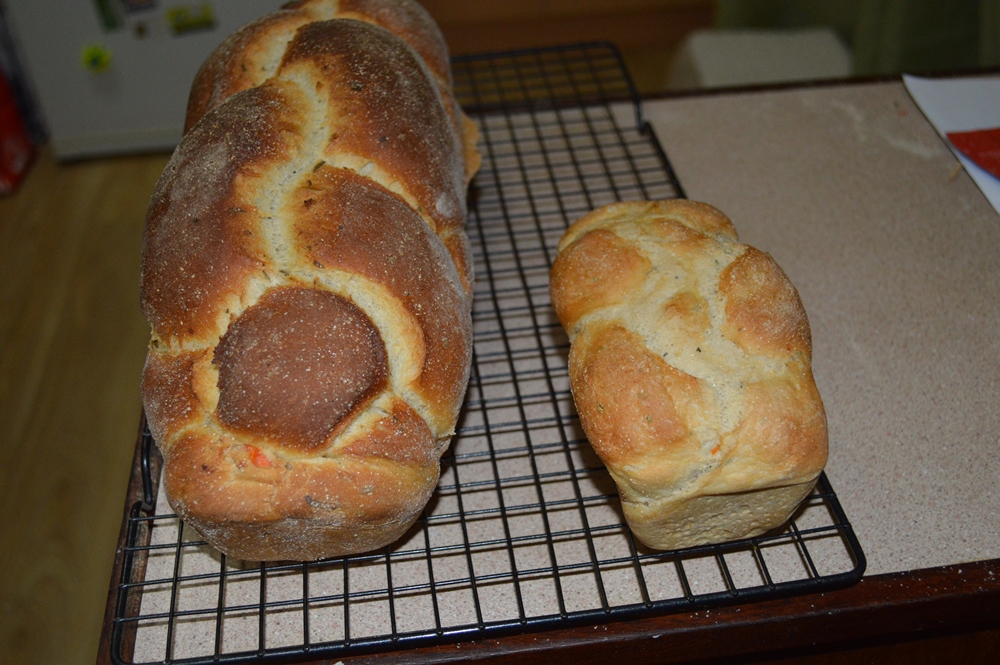 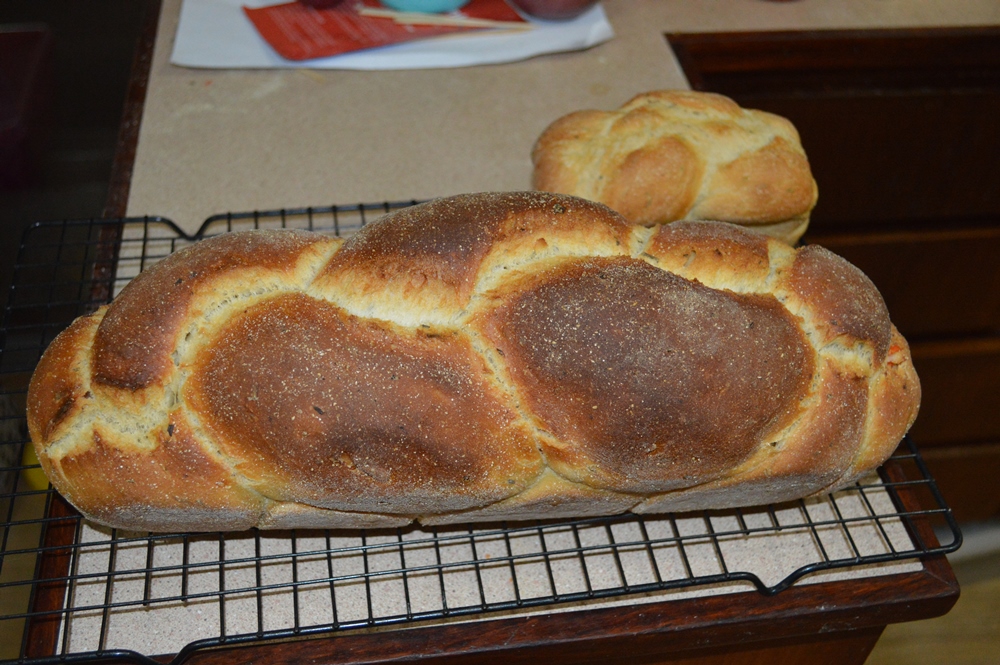 The large loaf was baked in a Sassafras clay baker 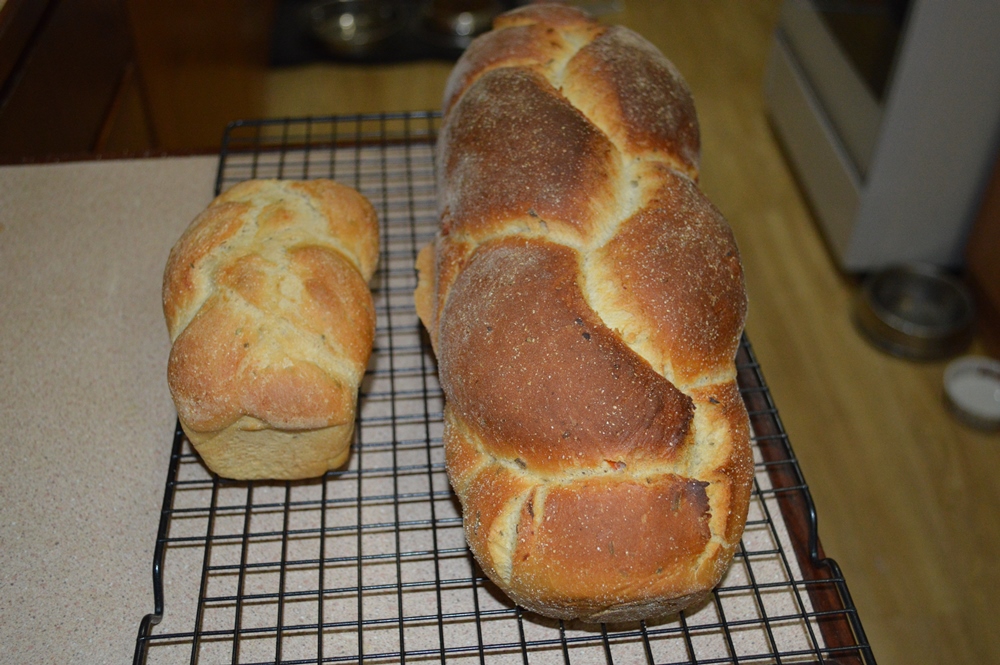 The smaller one in a small loaf pan 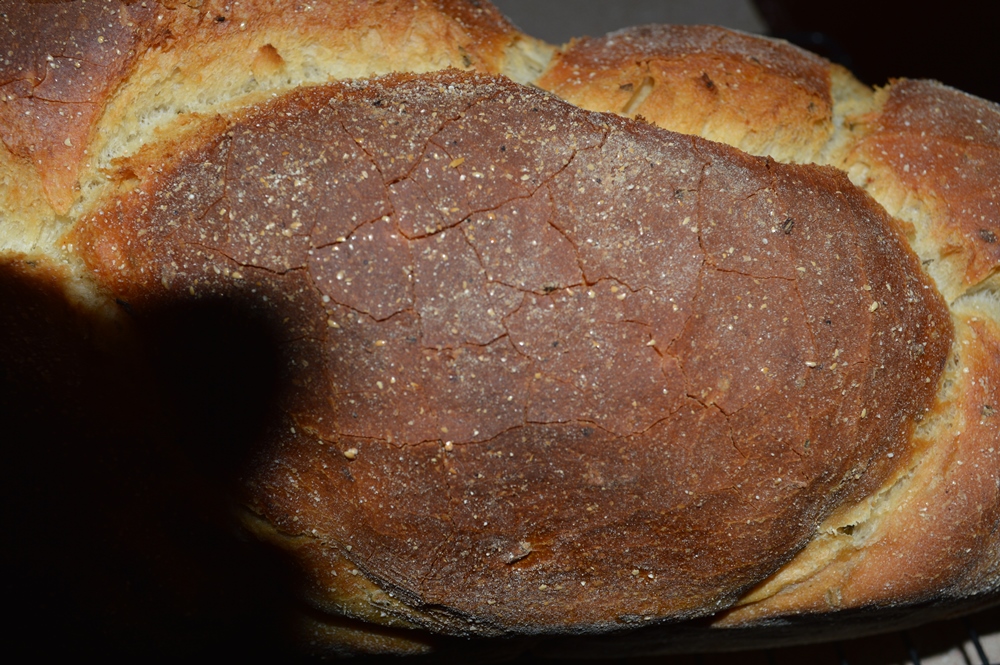 i just love the cracks in the crust after cooling

I don't think we have ever tried carrots in bread but Rosemarie goes into the pizza dough every time - or i isn't pizza!We will have to give carrots  a go but probably just the non royal blue ones:-)  We still make th cheese and green onion bread as a foccacia.  As far as Aussie wines goes., Lucy has sort of gotten stuck on the Cabs and Shiraz of Barossa Valley -  Lehmann's The Barossan and The Davey Family Shiraz come to mind - both are excellent and under $20 too!  Torbrec Woodcutters is nice too but is $24 a bottle and starting to get pricey.  We used to drink Penfolds but it is too expensive now:-(  My daughter just got a Red Merle Aussiedoodle dog.  Can't wait to see it over the Memorial Day Holliday at the end of May!

Thanks Dab  i managed to save two slices for a picture of the inside of the loaf. The Banneton is a nice long one yet to give it a go it was a present from my sister filled with a whole load of home made goodies, olives, quince jelly and jams and of course the packing is going to be mighty useful too i reckon it will take a 1200 -1500g loaf! 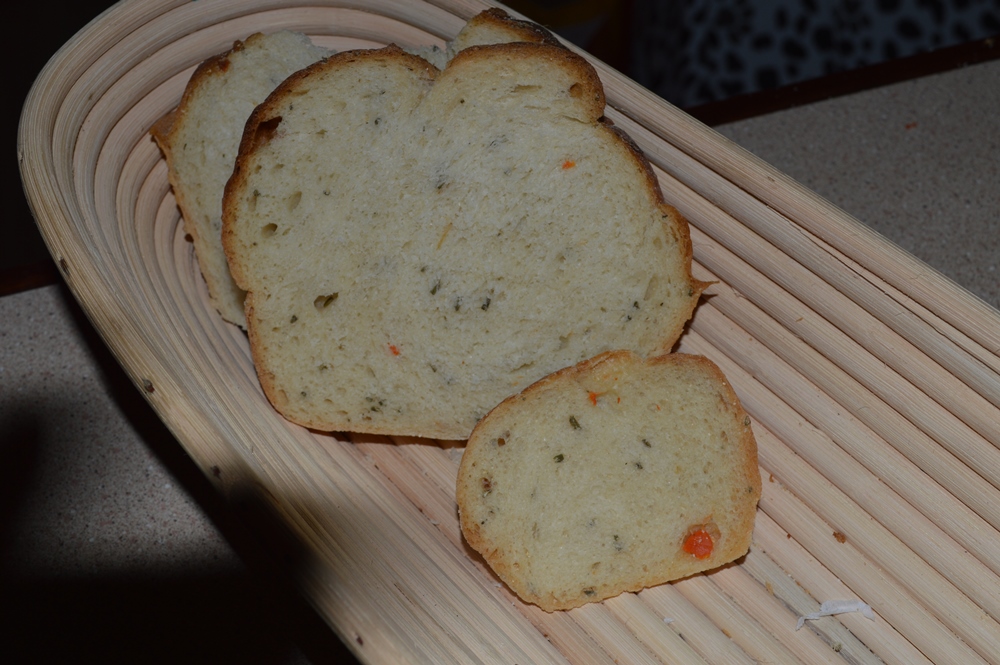 i think i got the balance about right, my wife warned about rosemarie being overpowering but as she was out for the evening i was able to use all the leaves that i had harvested from preparing some cuttings. The Gallipoli Rosemarie is a white variety and probably milder than the more common blue flowered variety and has a sweetness to it especially in  the baking aroma.

Anzac day commemoration is coming up soon in Australia (April 25th) and Gallipoli  has a special place in history of the first world war where so many young Australian and New Zealand and British men lost their lives on the beaches at Anzac Cove. This Rosemarie is said to have been bought back from that part of Turkey. The Royal Blues are quite a waxy potato and i boiled them with the skins on i was tempted to mash them with the skins but ended up taking them off , the skins change colour when boiling.I bunged the carrots in un skinned with the spuds just for a quick par boil as i wanted them to not squish out in the dough. The spuds were mashed and the carrots skinned and chopped the Rosemarie was also chopped finely.

Method:  i weighed the water added an equal amount of the flour and the yeast and brought it together and set it aside, i weighed up all the other ingredients ready to be added to the sponge after about an hour. mixed by hand on the bench  adding the carrot toward the end of the doughs development. The dough moved along quite quickly no doubt due to the sponge being used.

The dough was  knocked down and divided  for the two loaves  and further divided for the strands for the plaits . The  loaves were then shaped and the small loaf (250g) went into the tin and the larger went onto the couche and was covered . The dough was proofing quite quickly  so The Sassafras clay baker was popped into the oven to heat up and then the large plait was rolled onto a small hand peel and the loaf slid into the clay baker, it had expanded to almost not wanting to fit, and was quite snug. the lid went on and into the oven for 20 minutes with the lid on and about another 20 with the lid off. The smaller tin was on a lower shelf and didnt colour as much.

Over all very happy with the combination and will make it again for a BBQ evening coming up with a great bunch of friends.

Your choice of wines is very good   and i have visited the Barossa  and Clare Valleys in South Australia.   The Harewood  is a West Australian wine  from the Great Southern District.My cousin has a vineyard At Frankland  and sells his grapes to Harewood in particular the Shiraz which is excellent. Like you i reckon the step up over $20 is a big one and there are some really good wines for under 20. i quite like trying a clean skin (no label) and  from some very good producers too for as little as 4 or 5 dollars. Mind you I do know how much hard work goes into  making the wine. I wired the whole vineyard and still do all the wire repairs, i do get rewarded with some of the bounty though!

This year and it is toward the end of harvest time here in the West My cousin has no grapes to harvest, there were two evenings of frost back in November when the flowers were setting the fruit and the whole vineyard was frosted no grapes no income but still all the maintenance to keep up. 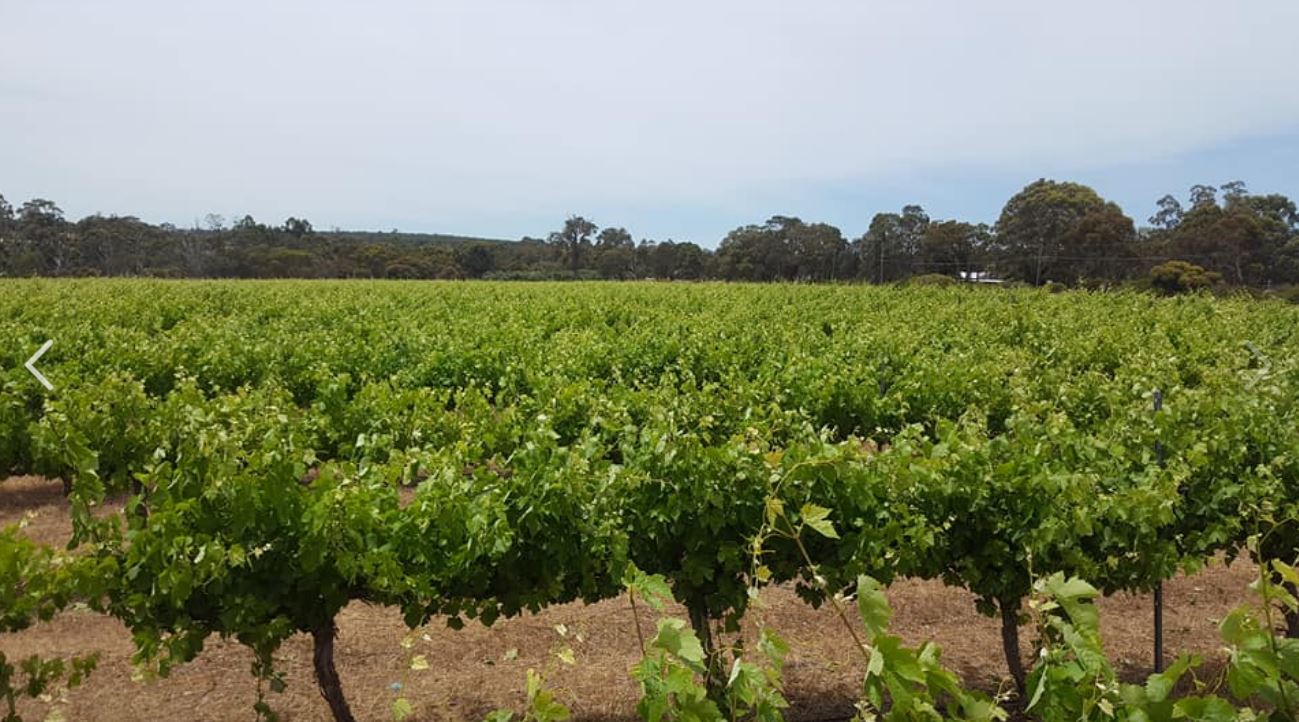 a view across the Shiraz 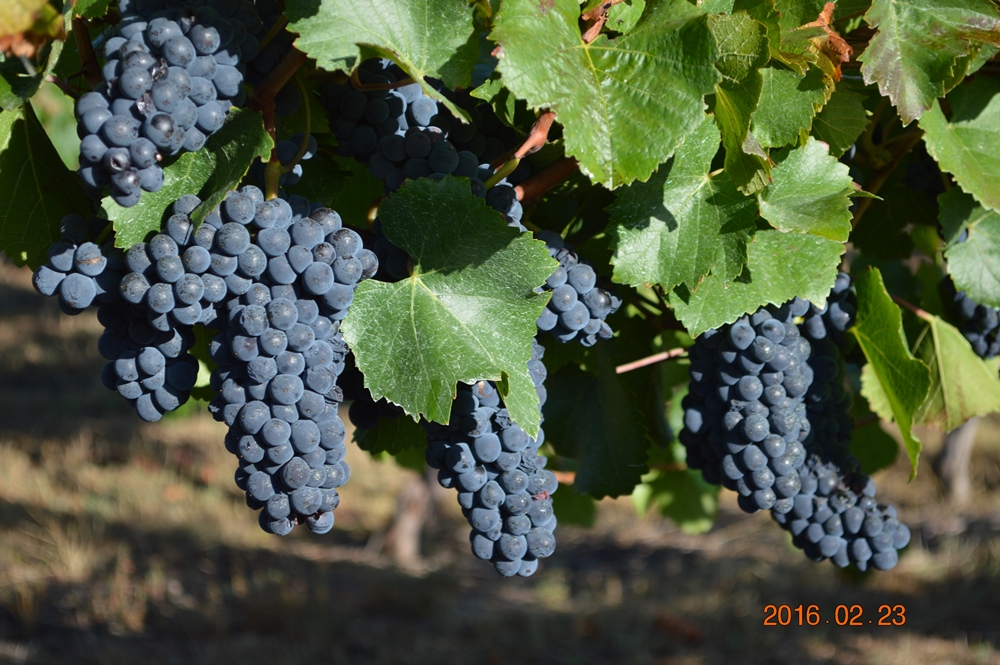 happier times at the Mischief vineyard. with bunches of fine shiraz 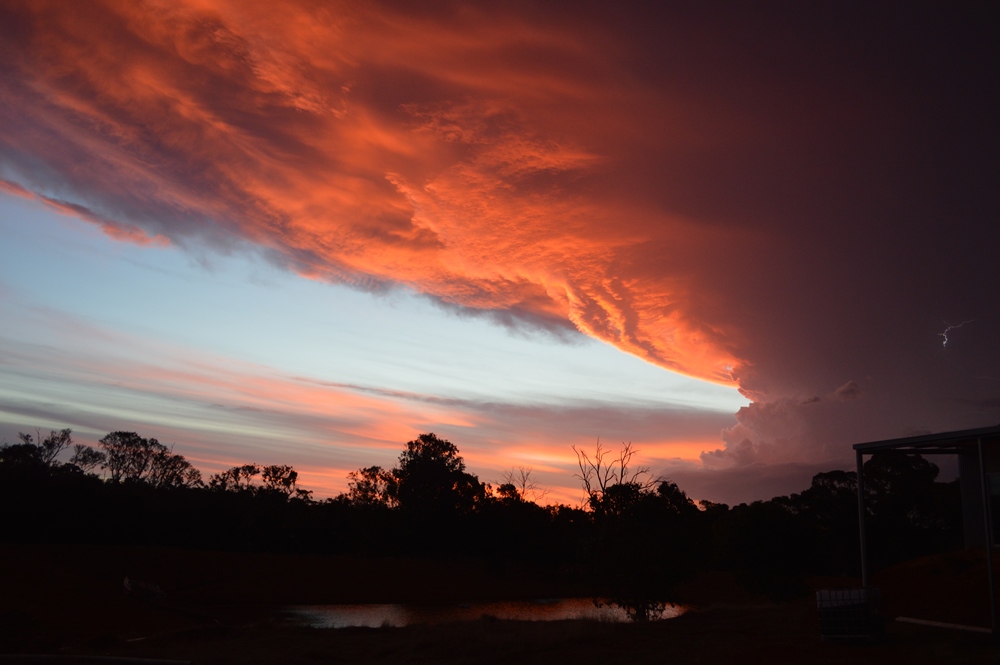 And recently there on my birthday in March and a present from mother nature!

Lovely looking loaves and beautiful photos.  Thanks for sharing.  It's finally starting to get nice here...so now comes the Spring Clean-up.

I've used multi-colored carrots in bread before and loved the extra sweetness it added plus they look cool.

Thanks Ian,  i agree carrots do have a sweetness  to them and hold their colour and shape pretty well. We are having a bit of an Indian summer here another week of near perfect weather  up to 34 on Tuesday and no RAIN in sight.  I am looking forward to a good downpour and a decent soak for the plants.

Going away up North in June to Exmouth gulf where the US had a big presence with the Naval communication base there for submarines. I'm going out for a fishing charter with a good mate and we are then going to be camping on a sheep station close to the beach where the fishing is out of this world. May even get time to make bread in the camp oven on the beach. Watch this space!

Sylvester Feightsinger, the founder of Le Vigne Winery (it wasn't called that originally) in Paso Roles, got me into wine.  Originally it was called Sylvester Winery but after he passed in 2009 and his daughter Sylvia and SIL Walter took over, they changed the name and made it more Italian because Walter is from Italy.  Walter is quite the Chef and I built his first restraint, a rail car diner, at Peaccock Cheese in Vernon CA.  With another one of his employees, we planted the first Chardonnay and Cabernet grapes and pistachio trees and ran the drip to them in the early 80's when I was in my 30's and there were very few wineries in Paso Robles then.   You have to be young to be a grape farmer - it is hard work!  Having frost damage is just terrible.  No frost in Paso Robles though.  It was 105 F when we planted the first grapes:-)  Sylvester and I were in the cheese business and what goes with cheese - wine and bread of course- my 3 favorite food things especially when all served together!  Sylvia puts out the best cheese spread, she learned from her dad,  to go with the wine pairings at the tasting room, the cutting board goes home with you, and Walter's fine Italian fare is just great.  The grapes that do best are Cabernet, Melot, Zinfandel, Syrah and Mourvedre - late grapes that love the heat for the sugar production and the cool nights to retain their acid.  Some of the best and least expensive CA red Bordeaux and Rhone, CA style blends come from Paso Robles now.  Justin, Daou, Saxum, Turley, Eberle, Booker and Tablas all make great top 25 wines and Justin's, Eberle and Daou $20-$30 offerings can't be beat for the money.