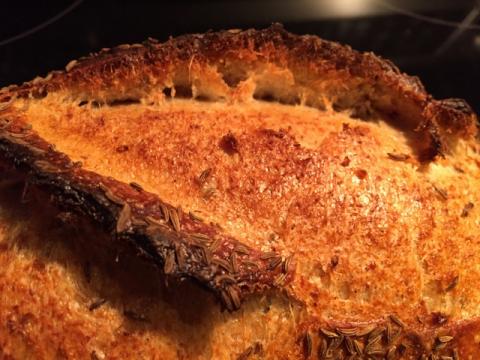 That's the saying.  But I was already home and wanted to go big anyway.

My wife was off to an early morning flight to Tobago for a Pan-Am Dragon Boating competition.  She asked if I'd bake a WW fig-raisin-pecan levain bread as some boarding gate breakfast for the troops traveling together.  Made two, sliced 'em, and packed them off with some butter and cream cheese.  These are designed to bake dark and craggy, the left with traditional baguette scoring, the right with a criss-cross design. 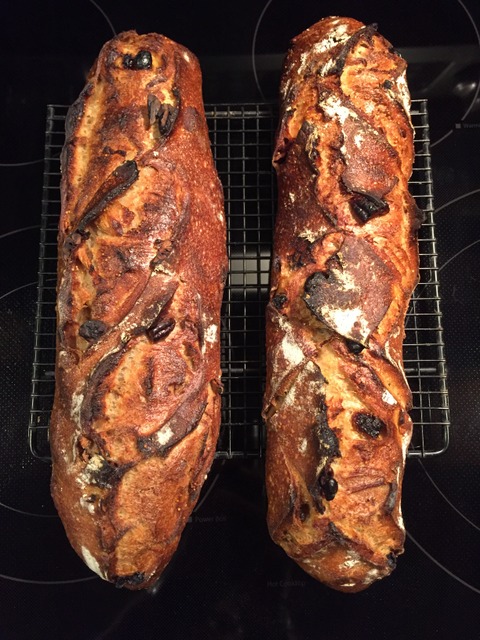 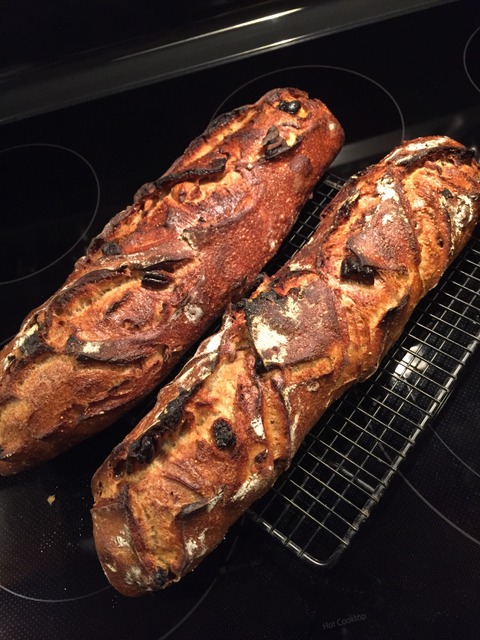 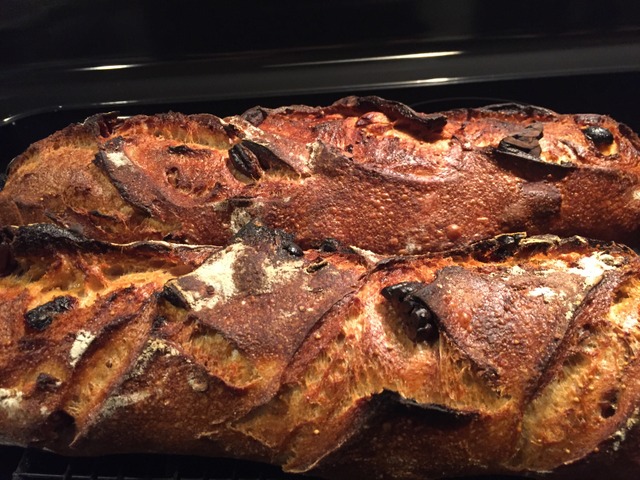 Getting itchy to bake up something.  This gargantuan specimen is a Rye with Caraway.  Instead of using a Rye Sour I opted for my 125% rye levain. 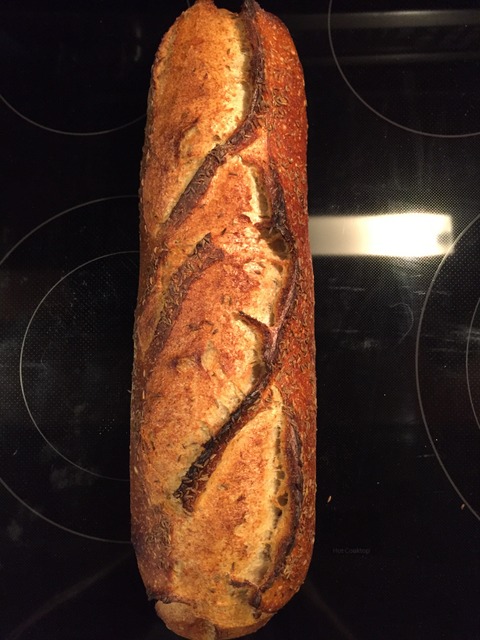 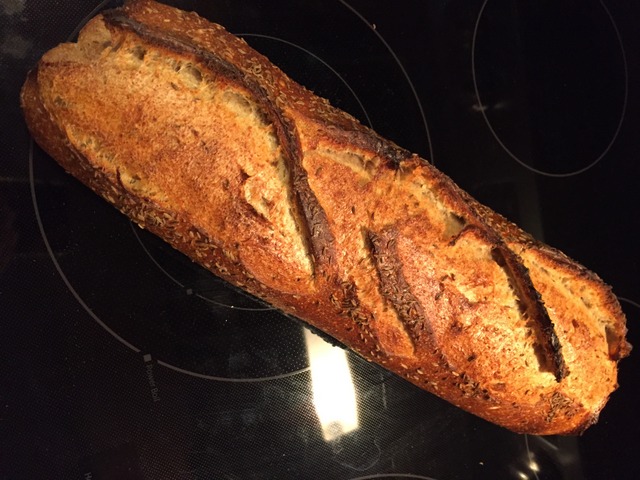 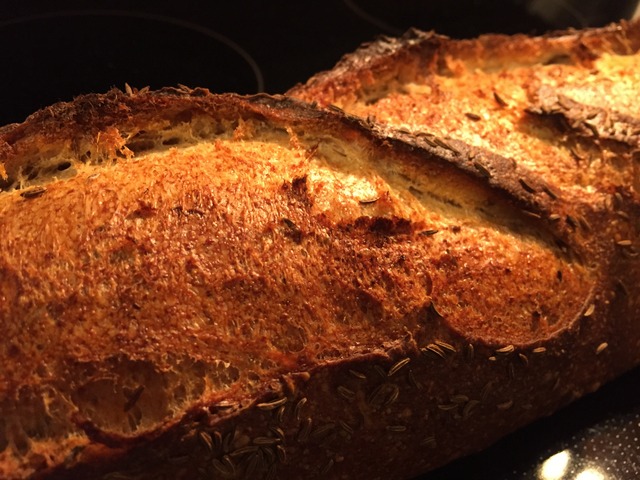 A short time ago I decided to Ziggy-up a 5-Grain Levain. 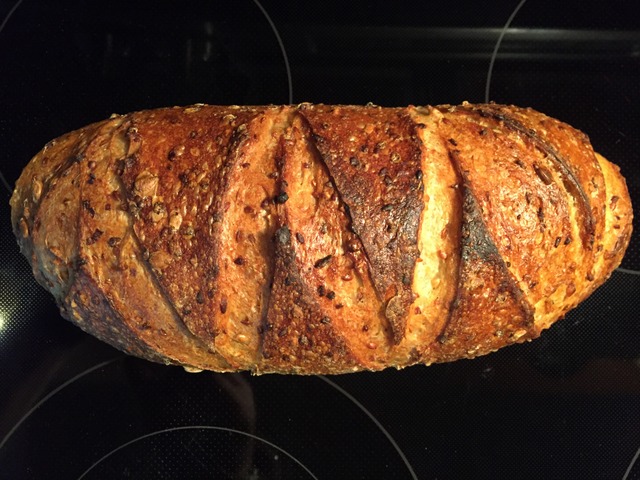 loaves Alan...I bet your wife was the most popular arriving with those loaves! And the rest of them also look just fantastic and so delicious!

Would you mind to explain why you decided to use a 125% levain? I am still trying to get my head around the amount of leaven baker's decide to use for a specific bake as well as different hydration...I hear stiffer starters are used for 'more strength' for example and what does that mean for a 125% hydration leaven? Sorry, probably one of those horrible 'how long is a piece of string questions'..ha, ha... Kat

I dunno.  Just because I guess.  For a long time I was a slave to my 75% hydration mixed flour levains, not heeding the usual call of the Sirens to enlist all that often in the 100% white flour levain brigade.  But eventually incorporated some of those also.  When I decided to finally knuckle under and purchase Mr. Hamelman's book, I saw that he had a propensity for 125% hydration levains.  And I guess that it took off from there.  In fact this formula used to be calculated for that 75% but at some point (don't keep notes on these types of things although it wouldn't be a bad idea) swapped it out for the 125%.  The WW fig raisin pecan bread still employs the 75% hydration levain.

I'm not much of a fan of chasing after the sour aspects of sourdough, one of the reasons I refer to mine as levain.  Maybe just because I'm trying to be snobbish about the nomenclature?  A mild sour taste is sufficient for me, if at all.  I like using levains because they make the hobby more interesting, add flavor and staling agents to the bread, but still act primarily as leavening agents.  Plus - and this is a critical aspect of it all (so pay attention here) -  I get to warble that "I make levain breads" with a lilt of the voice that reeks of attitude and know-something-ism, instead of the remainder of my meager existence where I don't know much about much!

When the formula calls for 125% hydration, it is hard to do an autolyse with just the flour and water, so the levain "must" be incorporated at initial mix time.  To me this seems to give the entire process a head start/boost by having the levain start to work on the remainder of the ingredients while they are being hydrated during autolyse.

But I could have just as easily switched out the 125 for a 75 or 60, etc.  What seems important is to try and keep the percentage of pre-femented flour at a consistent level regardless of the hydration of the levain.  There are plenty of folks on Isle TFL much more knowledgeable and studious about levains than me who might give a better answer to your question than I could.

Okay, so here's a reason that a bakery, and not dabblers as we two are, might stick to a specific levain.  Let's say that it's a corner bakery, a small-ish operation, and wants to have a variety of levain breads for sale.  If the head baker could recalculate the formula for each/most breads to take advantage of a single levain, then perhaps this would simplify the scheduling, product care, storage, and manpower.  Maybe a bakery that did this, but recalculated all levain based breads down to 75% hydration, could save on some significant storage space as well.

Thanks for the kind words and the question that forced my brain to kick start for an answer,

Hmm, I don't have a clue why all of this dead space is appended to the bottom of this comment.  Oh well.

that a stiff levain can suit a bakery making a fair quantity of bread because they can mix the levain up in the spiral mixer at the start of the process and then turn it out to ferment.

As opposed to a 100% or 125% which would be pretty sloppy and need doing in a planetary, if available and would also be a larger volume of levain to handle because of the extra water.

More than likely even small bakeries have planetary mixers for various other tasks, perhaps mostly for any pastry/viennoiserie that would typically compliment a bread shop/cafe.  If they went that route, I'd guess that the bakers would schedule time on the mixer with the pastry staff.  For a multi stage levain build that would be ensuring that the mixer is freed up multiple times day, probably not much of an obstacle.  But your reasoning certainly seems sound.

for your thoughts on stiffer starters...It is from bakeries on IG that I picked up their use of  stiff starters and your comments make perfect sense.

I am also in process of building a 50% hydration starter to try David's San Francisco style Sourdough bread...Judging readiness with those ones is the hardest for me....

Sorry for hogging your lovely post with 'starter' discussion. Thank you!!!!! Kat

for taking time for my question and I also noticed that J. Hamelman is often using 125% hydration for many loaves and I did wonder about the reasoning for that too?

I am a creature of habit and got very fond of using AL to help with gluten development as I handmix and like the enzymes to do some of the work for me...As you said, it makes this more difficult with the 125% leaven...

I am experimenting with a 80% hydration starter at the moment for a number of reasons, one being that it is slower and might help in the summer. Another that I can easier get it ready the night before and it is ready for use in the morning...whereas with my 100% starter it can overshoot and I don't have time for a 4-5 hours Autolyse unless I build a levain at the same time...  I was also wondering about the 'more strength' element of stiffer starters, especially if you were to work with loaves with high hydration?

Oh so many options...I also like the not too sour...but have to admit that I never really tried a really sour loaf either....  Kat

I'm salivating at the idea of having figs, raisins, and pecans together. I bet it was a very satisfying bread for them to eat!

I've farmed these out.  Our dog-sitting friend is coming by again later this week so that we can disappear for two weeks. I asked her which breads she'd like for me to bake for her.  She opted for this one, right behind the sesame semolina with pine nuts fennel seeds and raisins.  So I have my work cut out for me ;-)

About the excess space at the bottom of a post, it's probably from Microsoft Word. It's because Word does complicated tricks that are normally invisible. It's fine to compose in a different window - just try using other than Word for that purpose.

I've done something like 150 blog posts on TFL and at least 10x as many comments and never seen this before.  I don't use Word to create my posts because, as you stated, it gives some internal formatting issue on the transfer to TFL.  I either type them directly in or use my email editor, which I didn't do in this case.  A head scratcher, as I re-edited to post twice more in an effort to remove the offending blank space, to no avail.

The rye and caraway is Lucy's favorite because she is a Rye Freakshow plus she likes the wine too!  The criss cross slash is my favorite after the T-Rex too.  They all have to taste as good as they look!  Well done and Happy baking Don Baggs.

it was just on a lark that I decided to make a Godzilla sized beast.  And I really like it, kind like what they may serve at catered affairs.  What's funny is that the rye is only 20% rye vs. a real Jewish style rye, but the flavor still comes through.

At the gate now on the way out of the country and about to board, but our dog-sitter friend is well supplied with bread for the time we are away.

Thanks, haven't been much actively involved in TFL these past few months, but paying attention even if I don't leave comments very often.  Your family seems quite demanding of your baking skills.  A way to keep them close and interested in you.  Good looking breads on your post too.  Lots of variety going on these days.  I want some of that chicken noodle soup!