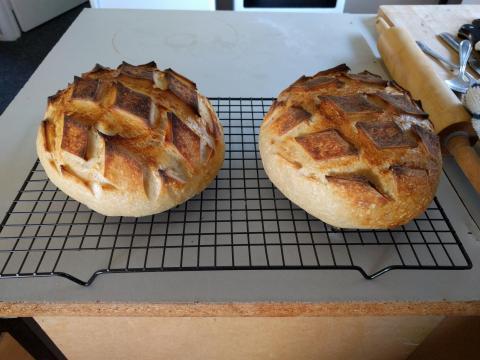 I tried Mike Giraudo's recipe, posted by dmsnyder.  It was as follows

Then cover and let dough rest for about 8 hours at room temp.

After 8 hours, divide and shape into loafs and then into bannetons or lightly oiled containers, cover- then into the refrigerator for at least 12 - 32 hours. (The longer the time, the more sour the bread)

After refrigeration, place immediately into a pre-heated Dutch oven @475 for 20 mins and then uncover and cook for another 10 mins @450 (or until you like the color of your bread.) Feel free to use all purpose flour, makes for a great crumb.

I don't have a stand mixer, so I kneaded by hand, not quite to a window pane (knowing what was coming next).  Other than that, I followed this recipe to the letter.  Here are some of the details: 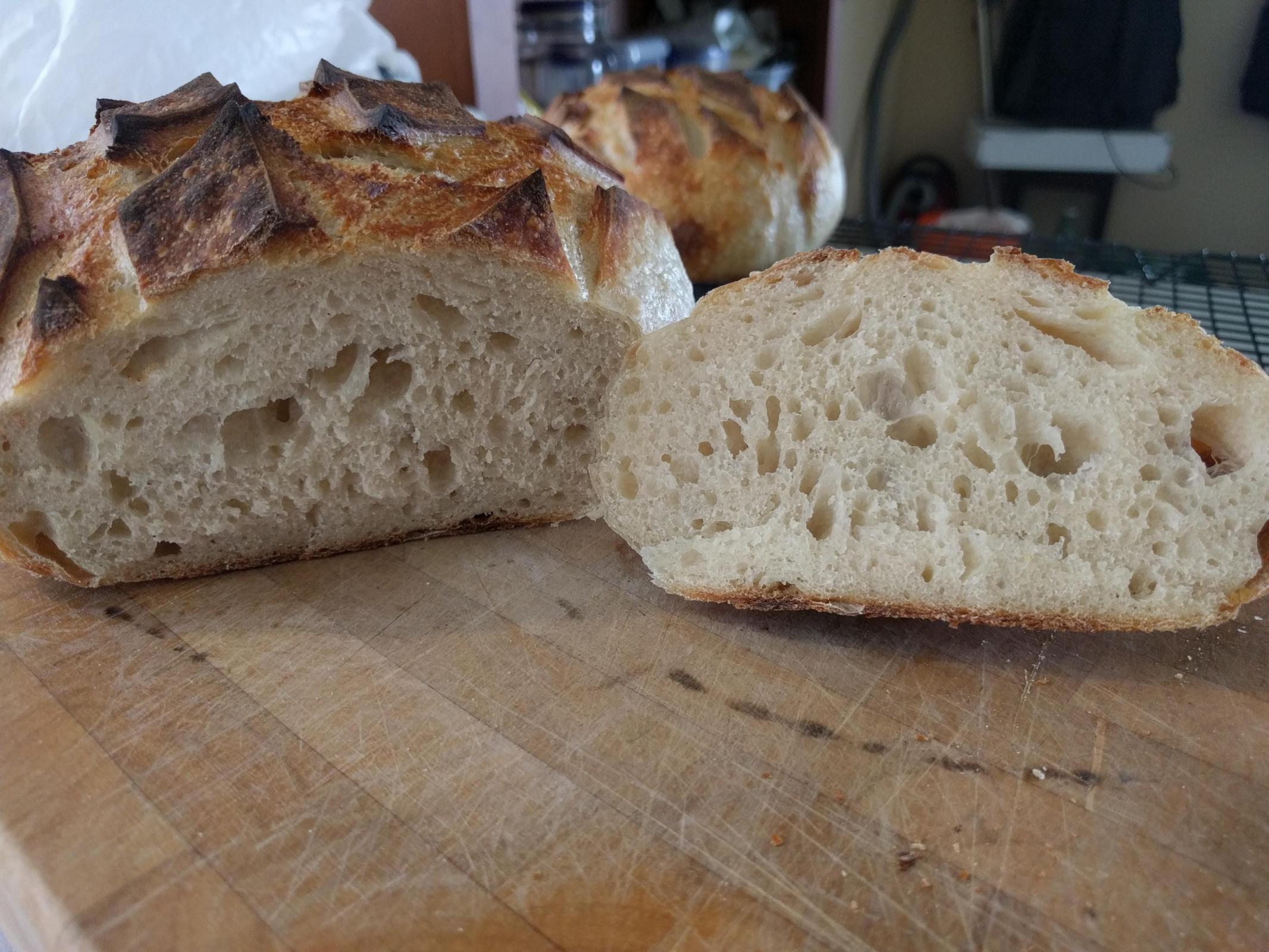 I've let it cool 8 hours, and just tried some.

The crust is chewy and very nice.

The bread has a mild sour tang.  Pleasant, and enough to make me go back for more.  Too mild presently, but I'm sure it will be more sour by tomorrow.

Unfortunately (and I'm being snobbish here), the sour tang isn't quite like San Francisco sourdough.  It's very close though.  A bit too much in the middle of the tongue and top of the mouth, rather than pulling at the back corners of my mouth.

But this is getting very close.

You mention areas of the mouth detecting flavors. I am very interested to learn more. When I chew my SFSD I have to chew it a while and then the flavor comes on strong in the very back and on the sides of my tongue. It is a super pleasant experience.

I’ve not heard anyone else describe the flavor experience the way you did.

What can you tell me about this?

My experience is just like yours. The flavor is not immediate, you have to chew it a bit, and then it comes on strong along the sides of the tongue or as I say in the corners of the mouth.  Whenever I even think about sourdough bread the sides of my tongue almost automatically pucker in response to the memory.

I'll be tasting this bread again a bit later today.  I expect the flavor will have changed to exactly this.  At least I am hoping so.

I am surprised by how pale the sides of the loaves are. Were they almost touching each other in the oven? (Evaporation cools the air and humidifies it in that circumstance.) Other than that, the loaves have a classic SF SD look, both crust and crumb.

FWIW, I now know from some of Mike's FB postings that he feeds his starter somewhat infrequently and tends to use it right out of the fridge with no activation feeding. I can also tell you that Ramon Padilla feeds his starter 3 times a week. I have the impression he keeps it at room temperature (in San Francisco). I really don't know if he ever refrigerates it.

One trick to get more sour is to use a very mature starter. That's one of my next modifications to try. I remember when I first started baking sourdough breads, I baked the sourdough from Peter Reinhart's "Crust and Crumb." I would feed the starter, let it mature, then refrigerate it for a couple days before using it for the final dough. Those loaves were also cold retarded. They turned out moderately sour. In recent years, I have been making breads in the Chad Robertson/Ken Forkish style with younger starters.

The sides are pale because I'm baking in a dutch oven.  I lower the bread in on parchment paper.  I think those lower sides of the bread can't breathe properly.

Mike, I went back to take another look at your bread and also study the formula and process. It may be that the light sides accentuate the browned crust. At any rate they are visually appealing, IMO. But if you wanted more even coloring, maybe you could remove them from the cookers after the covers are removed and the loaves have setup.

I forget how David BF his bread. But, I suggest to you consider using your proofer (since you have one) to dial in the temp. I think we can agree, that temperature controll is vital to consistently producing sour sourdough. The warm fermentation develops that “back of the tongue/mouth” lactic thrill we like so much.

An observation -    David’s formula and both of your bakes... 60% HYDRATION! WOW. Gorgeous Crumb. The gears in my mind are turning. I am constantly trying to learn ways to ferment the dough longer. I’d love to be able to BF @ 78F for 24 hr. But that ain’t happening. BUT 60% hydration may get me closer to extending the ferment. I am thinking that even though 60% is dry, once the dough ferments for more that 16 hr @ 77-78F the dough will have relaxed tremendously. AND hopefully the strength derived from the low hydration may help to hold off dough degradation. I look forward to input from others, Pro or Con concerning that thought. The goal is to extend the warm fermentation to the maximum length of time without degrading the dough (gluten breakdown).

When I was trying Larraburu at 41C the dough smelled absolutely wonderful.  So I really do think a warmer BF is going to fix this.

This bread today didn't taste any different than yesterday... a bit too vinegary (which BTW is a wonderful taste in a wholegrain loaf).  Also, the crumb further towards the middle of the loaf was denser -- the cut shown in the picture just happens to be a lucky place to have cut the loaf.

I'm also favouring lower hydrations as of late, but 60% is a bit too low for my preference.

and a knock off for the classic old school SFSD, except for the fancy do scoring:-)  Now you are at where I was 5 years ago with the looks right and the sour wrong.  I will suggest that the you need to get a higher LAB to yeast ratio in your starter and levain to get more base sour and more tang in the finished bread.

More LAB and less yeast in the levain means more sour and a longer time to proof allowing the LAB to really crank it out.  The one thing that is missing from this recipe is the supposed hot final proof where the LAB are also favored at 93 F.  Getting the starter and levain with a higher L to Y ratio and then shortening the retard to 8 hours and finishing the proof at 93 F on the counter will make you bread taste right and look right!

SOOOOOO are you saying IF I did want more sour...I need a warmer "final" proof AFTER shaping...then a retard of 8 hrs??

And who the heck is Mike Giraudo??  Could it be the one that was somewhat famous years ago for his bakery in SF??

Hi, 'scuse me for answering before dbm got in his response.

My own last bake in this series combined cold retardation of both the starter and the shaped loaves with fermentation and proofing at 80ºF. This combination resulted in a lovely balance of flavors with a strong lactic acid presence. The one time I tried a much higher temperature, I didn't particularly like the results.

Re. Mike Giraudo: Several bakers now have baked from a recipe attributed to Mike that I got from him indirectly on Facebook and posted on TFL last month. Mike is a home baker in the Bay Area.  At one time, his father and grandfather owned most of the famous San Francisco Sourdough bakeries including Boudin, Parisian, Colombo, etc. Before the bakeries were all sold, Mike worked as a baker at Boudin. 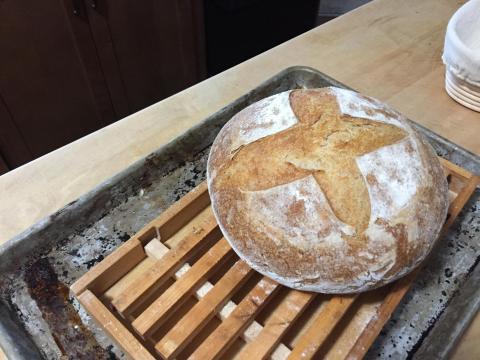 This bake I used a fairly young wheat/white starter @100%hydration that I was using for my failed attempts at the tartine recipe.  The first 2 bakes...I used a 60% rye ripe starter.  This bake had a more open crumb but not sure if that change in starter hydration could be responsible. 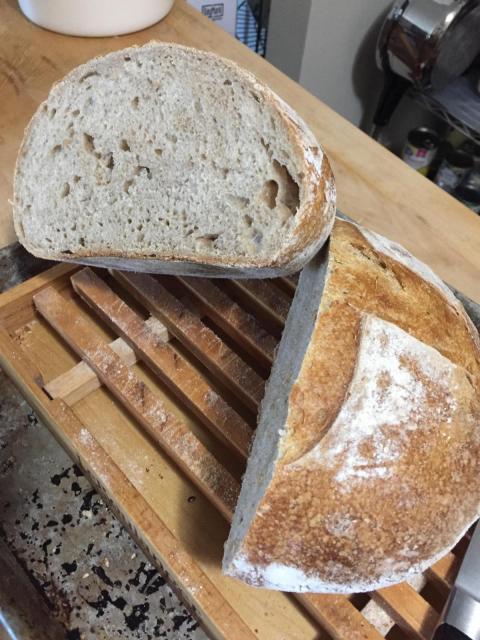 I baked this time by placing loaf (from a banneton) in a stainless pie pan (which I do not use for pies...cause stainless doesn't brown well)...covered with a stainless bowl that fit exactly to the 9 in pie pan for 20 mins.  Reason for this was my attempts to bake at a lower temp of 430F.  I got good spring...considering I didn't cut deep enough.

I put cold dough into room temp pan...covered with room temp bowl...then into preheated 430 oven...and it worked!  Much less preheat time that using the stone...or cast iron dutch oven.  AND at 430 my oven preheat...top element turned off...which is doesn't if you go above 430.  It's hard to bake bread when your oven stays in a preheat state...which is why I am trying the lower temp bake.

I did NOT want a crackling crust...for my elderly neighbors can't eat such breads as a rule and I can't eat all this bread by myself.

I'd say that this recipe works for folks that have a sorry a$$ oven, neighbors with dentures, and a granddaughter that likes to knead dough but hates super slippery dough.  And it tastes very nice...it gets eaten without complaints of a thick hard crust that was occuring with my oven problems.   A very good dough for teaching folks that are new to sourdough and to show folks they can bake without commercial yeast if they want to.