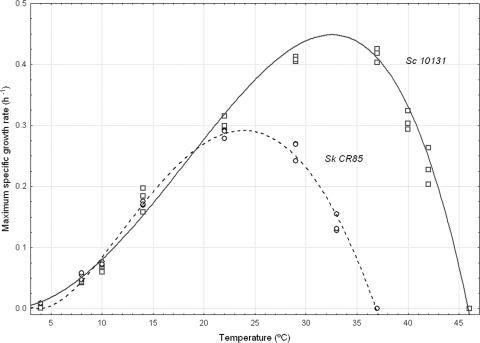 There is a graph going around which compares the growth of yeast to LAB across the temperature range.  The yeast being compared is C. milleri.  What disturbs me about this graph is that people interpret it as being the only yeast relevant to their sourdough.  It's not.

C. milleri is not the dominant yeast species in ANY of the 567 sourdough samples genetically analysed by the http://robdunnlab.com/projects/sourdough .  However, a lot of research has found C. Milleri to be present in the most powerful starters. Most of the older sourdough samples (the best and most well known) are dominated by the famous and well known Saccharomyces cerevisiae.

S. cerevisiae has been studied quite a lot, and its temperature dependent growth is fairly well studied and modelled [1][2][3][4].

I include a much better graph for this yeast (the upper solid line marked "Sc" is Saccharomyces cerevisiae.  The lower dotted line is irrelevant).

I think both yeasts are relevant.  The optimal temperature for maximizing your starter's leavening capacity [Edit: probably not, too many complicating factors, especially LAB competition] probably depends on what temperature you've been keeping it at (and thus the balance of yeasts), but I would expect it to be around 29-30C, which is damn good for both of these yeast varieties.

[1] Cheung et al., 2015, The Effect of Temperature on the Growth Rate of Saccharomyces cerevisiae.

Thanks for posting these data Mike.

While 29-30˚C may be damn good for yeast proliferation, it is a bit on the high side of a typical SD ~25˚C bulk.  I cannot summon an authoritative reference for this just now, but I have learned and baked with the belief, reinforced weekly, that striking the right balance of damn good for the yeast (>crumb structure) and damn good for the LABs (>flavor) is damn good(est) for the baker/consumer.

Yes, I'm not addressing the ratio of the growth rates of yeast and LAB.  It may be that this temperature range 29-30 is even better for the LAB, allowing LAB to outcompete, and a cooler temperature gives an edge to the yeast.  I suspect something like that is the case.  I just caution against coming to conclusions about that ratio using only data from C. milleri.

Yes, Gaenzle had a bad day in the lab when he picked that project. Maybe he was late in and it was the only project left?

We debunked that potentially misleading C. milleri graph a while ago on TFL.

I'm new here.  Glad to see this was already addressed.

Been reading a lot of older threads.  Damn this website has some really great stuff.  I'm learning tons.

Saccharomyces cerevisiae.is commercial bakers yeast that was originally isolated and grown for baking in the later 1800's  It is not well suited for SD cultures but it is found in a few of them.  The yeast strains usually found in SD are low pH and high acid tolerant strains that Saccharomyces cerevisiae is not especially good at.  There are lots of reasons why commercial yeast is found in SD cultures, especially ones taken from commercial bakeries where there is lots of commercial yeast around and some cultures are even spiked with it to speed up the fermenting process.  Yeast classifications have also changed since  Ganzel's time and are much more accurate today.

The charts show the reproductive rates of Yeast vs LAB at various temperatures.  They are not perfect for a;; the LAB and yeast found in SD which are about 3 dozen each but are a general way to understand how temperature effects each.