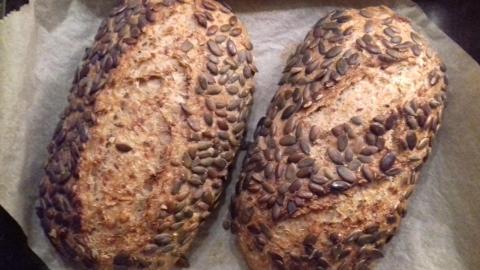 Dan has organized another community extravaganza and already, there are some beautiful loaves posted.

First build Thursday night; had lots of 100% hydration rye starter, so used that, which most certainly affected the finished loaves. Fed 12g at 1:2:2.

Friday morning, realized that I was out of bulgur/buckwheat, which I'd meant to use in place of the cracked rye, which I can't find here (matter of fact, finding "cracked" anything is a bit of a challenge). So did the second build (1:1:1) and retarded it until I could get the marketing done.

Made the soaker out of bulgur, flax and sunflower seeds and toasted multi-grain flakes (oat, barley, wheat, rye and rice). Didn't toast and/or grind any of the seeds. Measured out and whisked together flours and salt, measured out water (as usual, because of the difference between North American and French flours, 10% of the dough water was set aside), trying to organize a tidy mise en place. Did the final build of the levain (topping it up to get 340g of 125% BF levain). It was extremely soupy and a little nervous-making, despite what Alfanso's admonishments.

Dough was pretty stiff and I wound up adding, little by little, all of the reserved water.

Tried to do SLAFs to make sure everything was well incorporated, but it felt like trying to slap and fold a roast beef. So resorted to pincering and folding as best I could, wetting my hands and bench all the while, because the dough felt really stiff.

Over the course of the next two hours, did three or four STAFs on the bench -- dough was extremely stretchy but not at all elastic. Towards the end of the two hours, the dough began to feel almost workable, so into the fridge it went.

The next day, got off to a later start than intended. Took the dough out of the fridge to warm up for a couple of hours then did a pre-shape, bench rest and shape (the recipe doesn't mention the first two -- were we supposed to go straight to shaping?) I made one loaf slightly smaller (by 30g) than the other. I did remember to pull off a bit to put into a small jar to keep an eye on the rise.

To keep life interesting, I decided to try a new technique for the pumpkin seed coating. Rather than go through the business of rolling the loaves on a wet towel and dipping the loaves in a plateful of seeds, I tried just mildly spritzing above -- not at -- the loaves (anyone who's seen a hairdresser with a can of laquer will know what I mean), then carefully picking up the loaf with both hands and lowering the wet side down onto the seeds that were simply sprinkled onto the bench. Worked quite well!

Oddly enough, the loaves rose pretty well in their baskets, but the bit in the jar didn't, and I was beginning to get antsy because I had a bird to roast and was going to need the oven. In retrospect, I could have stuck the loaves back into the fridge until the bird was done, but didn't think to do so at the time. So I scored and baked. 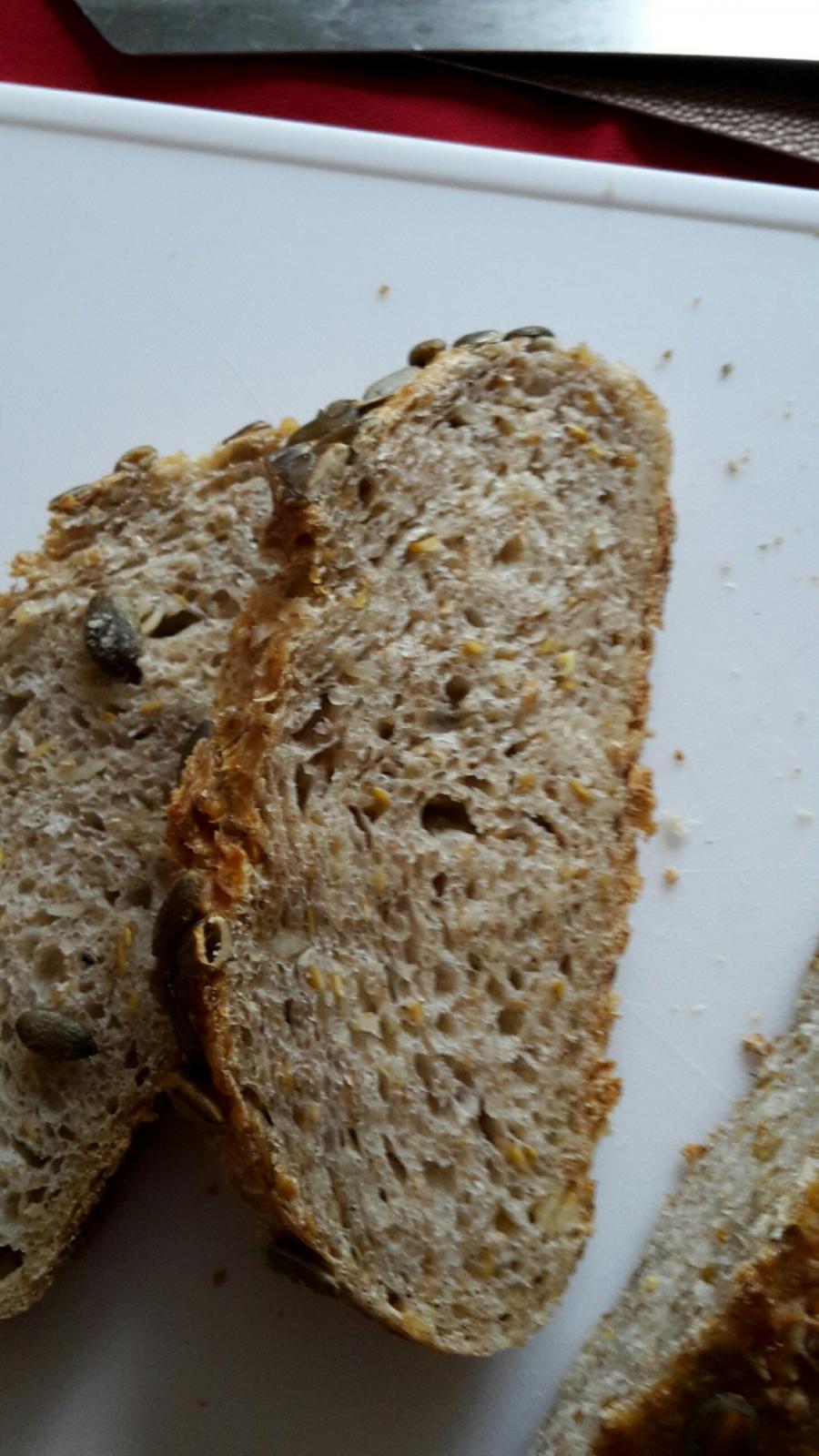 Same old demon with lack of rise, but Danni and Kat have since brought up the fact that extravagant rise with this many seeds wouldn't have been possible anyway.

The smaller, double-scored loaf rose rounder and higher than the single-score brother. Once again, I can't say if it's the scoring or the shaping that would account for that difference.

Crust is thin and crisp, crumb is moist and soft and absolutely tasty. So, will be taking another shot at this soon, perhaps doing the whole shebang in one day.

This is such a great place, so glad to have found it.

By the way, your crumb looks great!

ETA: Oops! Reread your post. I got it wrong. Your diagonal loaf rose better! Guess maybe we will both blame it on shaping.

Kat and Danni are right.  What makes that bread so delectable is exactly what makes an extravagant rise impossible.  Cannot have both.  I'll take taste ahead of holes any day....

I can't wait to give this another go.  Will do first build tonight, I think 😊

Looking forward to your next batch.

got made this morning!

means it went into the oven at just the right time!  The crumb wont be nearly as open like a white bread but it sure will taste great to make up for it!  Love the seeds on the outside too!.  Well done DW - everything is grand - Happy baking!

So you're saying that if I underproofed the he'll out of it, I'd get a big, balloony loaf?

Well done. Are you planning to make it again?

Funny you should ask, just baked another batch last night. Will be posting in the next hours/days.