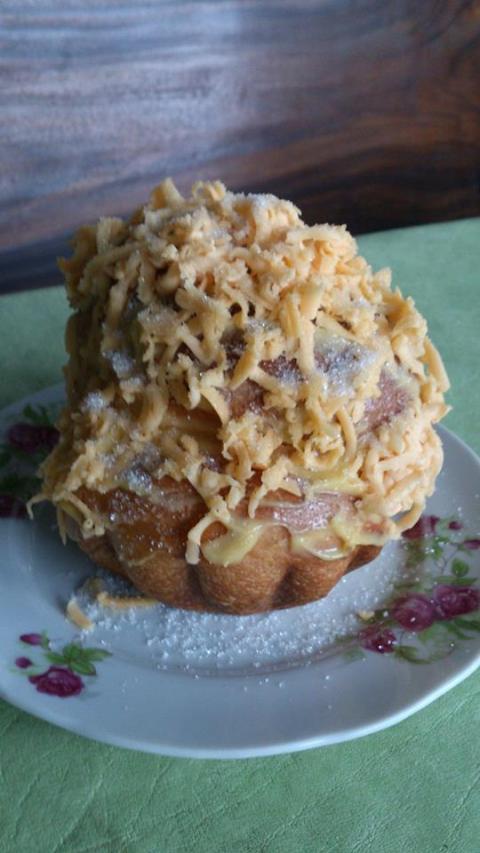 To start the year, I baked one of the most difficult yet luxurious Filipino breads, Ensaymada! It originated from the Mallorcan Ensaimada but the Filipino ones are very different from its ancestor that someone said they should go by a completely different name. The Ensaimada Mallorquina was more like a croissant, flaky and laminated with lard; the Filipino Ensaymada (Notice the use of a masculine adjective for a feminine noun and different adjective placement?) is brioche like, a soft rich bread. Our ancestors have really made it our own. Notice how the spelling changed to reflect Filipino orthography? Before WWII, when Spanish was still a prevalent lingua franca in the country, it was used to be spelled Ensaimada and made with lard (lard brioche, I can't imagine how good it was.) that clearly reflects its Spanish ancestry. 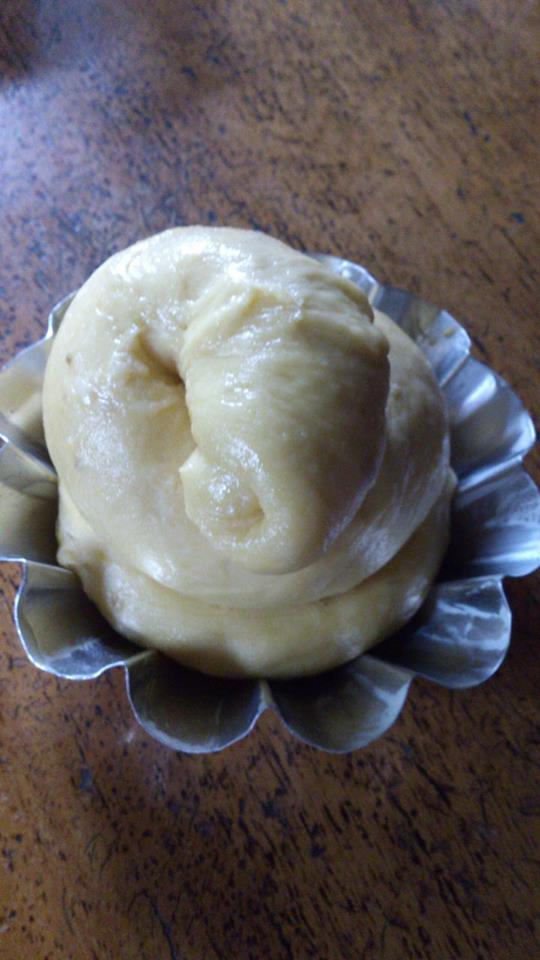 It is made with flour, milk, egg yolks, yeast, sugar, salt and butter—lots of butter! This is a bit more modern yet still traditional way of making them; remember lard was the traditional fat of choice. They are then coiled like a snail and placed in fluted molds then baked until rich brown. THEN, as if there was not enough butter and sugar already in the dough; it is brushed with more, (lots of) softened butter and sprinkled with sugar and occasionally cheese, aged cheese. I know, it sounds weird to put some cheese on top of butter and sugar but that's how we love it and as you know; Filipinos love the combination of salty-sweet/sweet-savory. Traditionally queso de bola, a local version of aged Edam cheese is the topping of choice but some dress theirs even more: people in the capital city of our province top them with salted egg and ham in addition to the cheese.

It goes well with Tsokolate de Batirol Filipino-style hot chocolate which I forgot to take a picture because we were in the moment of eating this ensaymada. It's the best we've had. We have never tasted anything like it before. 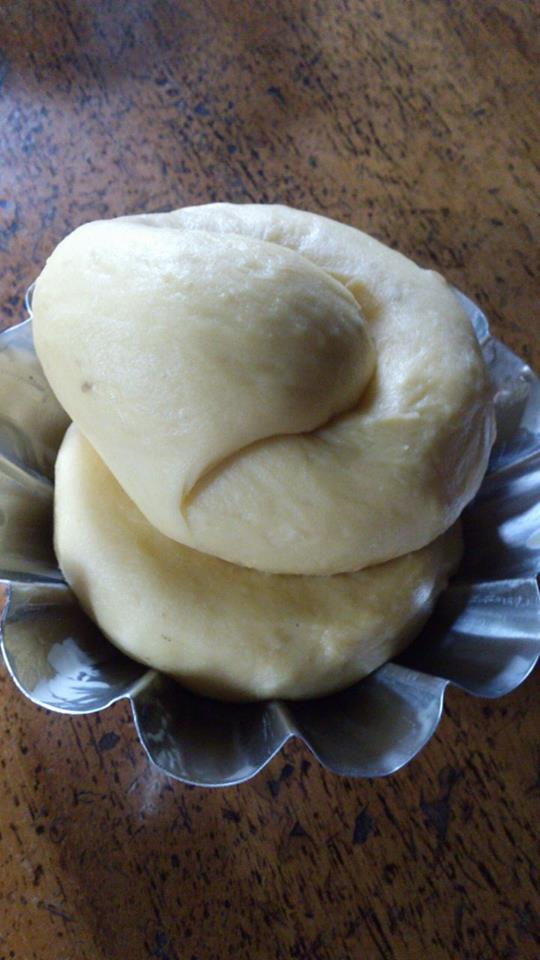 They are usually yeasted but I decided to make a sourdough version and it's my first time making this bread. Two breads immediately came to my mind; panettone and pand'oro, both super rich but naturally-leavened. I had a failed panettone earlier last year so I am challenged and determined to try make a similar bread and succeed. I followed the general outline of panettone recipes and combined it with the steps and ingredients of various Filipino ensaymada recipes. The difference between my ensaymada and panettone is mine is less rich in sugar and butter (the topping compensated for this :D) in the dough but definitely richer in egg yolks.

This one was made with three doughs before the bulk ferment. No additional water of milk, all of the hydration came from a ton of egg yolks. The only water came from the stock starter and the small levain build. My hands got soar the next day due the intensive kneading required but I was extremely pleased when I saw how strong the windowpane was after the last of the butter was completely absorbed! :) 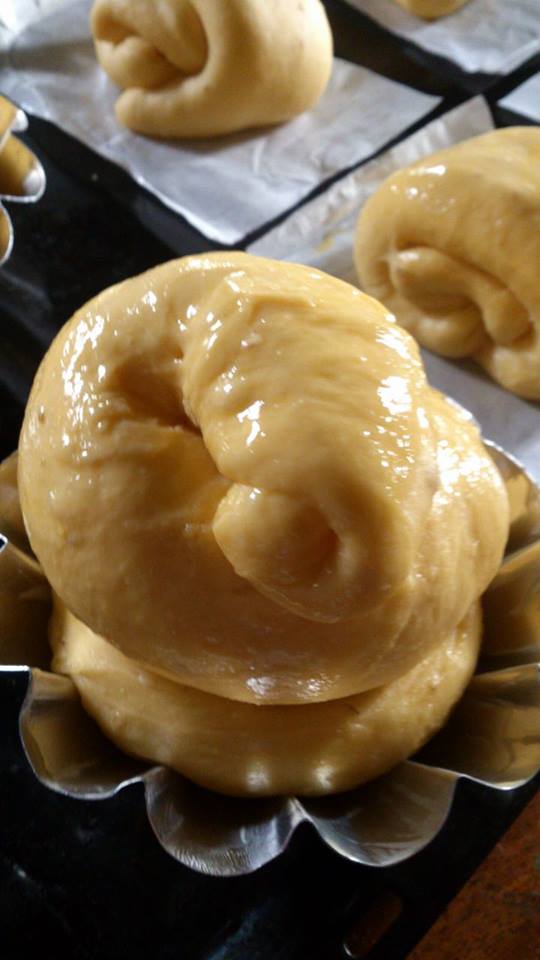 Final proof was quick despite the high amount of sugar, only 4 hours at 24C, imagine how it would have went if it was a hot summer day! The dough was already more than doubled when I put it in the oven. I baked it at 190C for 25 minutes. Oven spring was non-stop for 15 minutes, I was a bit concerned that it might fall over due to it being unable to support its own weight but luckily it did not. The dough expanded 4-5 times in the oven all created by my starter. She is that strong now. 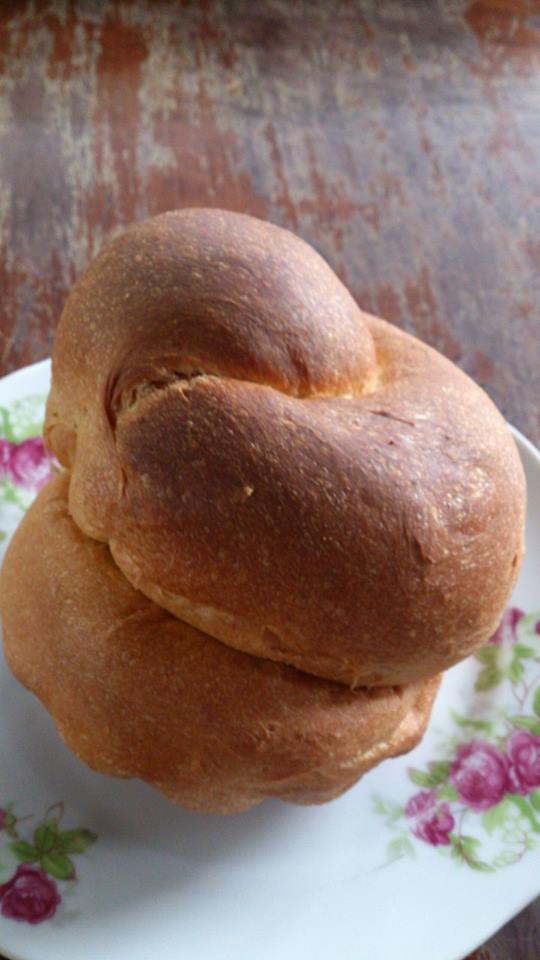 After cooling, I slathered the Ensaymada with a generous amount of softened butter and sprinkled it with white granulated sugar and grated a good amount of cheese right on top of it. I could not find the traditional cheese so this one had some sharp cheddar on it. Enjoy! 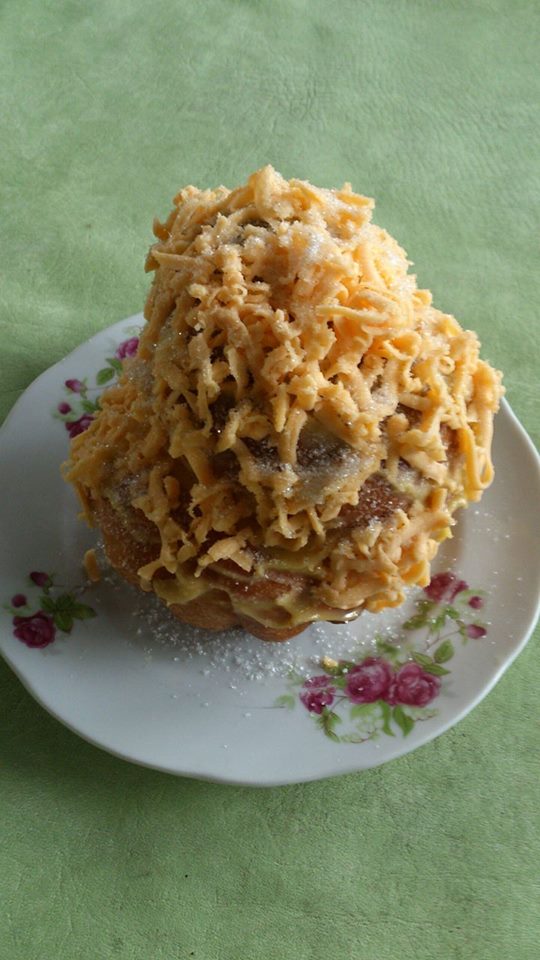 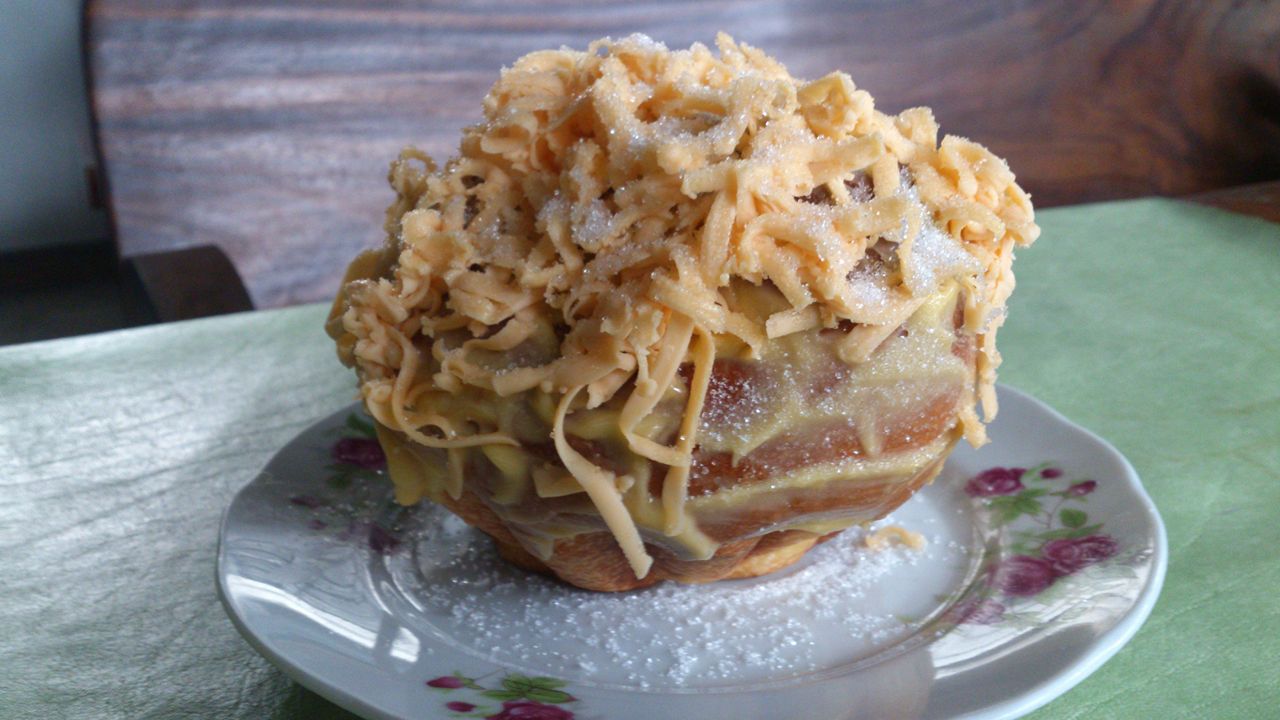 They were so tall and light, they collapsed a little bit after cooling. I should have went the panettone route and hanged them upside down to cool. I think they could have been lighter had they not collapsed a bit.

The Ensaymada was very rich yet light which makes it all the more addicting and dangerous. I could detect a slight slight tang but it was masked or actually played well with the rich, buttery, and sweet flavors. The saltiness and savoriness of the cheese balances the sweet flavor of the bread and the topping, and adds another dimension of richness.

The crust was a bit crispy and flaky. The rich brown hue to which it was baked adds to the overall flavor of the bread. The crumb has a rich golden yellow color from all of the free-range egg yolks from our own chickens. The high number of yolks also added a savory note to the bread. Ensaymada is a bread that harmoniously floats in the middle of the sweet-savory continuum; it's up to you to which direction to push it. The crumb is very shreddy, and feather light; I feel like it's the right crumb for a pand'oro or panettone and so I feel more empowered to make them in the future and I think I have a higher chance of success in making them which just a few more modifications. It's really lighter than air!

Unfortunately, my photography skills doesn't seem to capture the lightness of the Ensaymada. I don't know why the rich golden hue didn't show either in the photos. I'm sorry too, if most photos were out of focus. :) They just look better in real life. 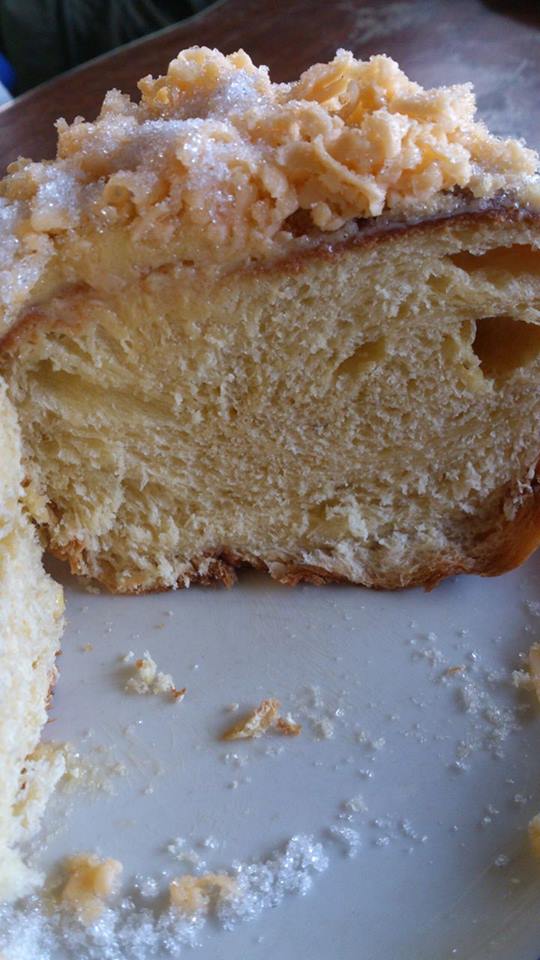 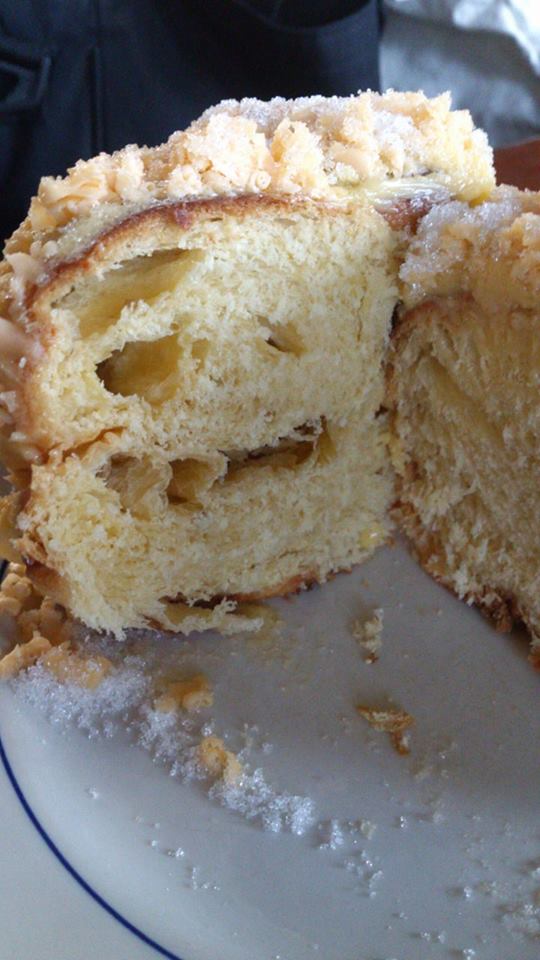 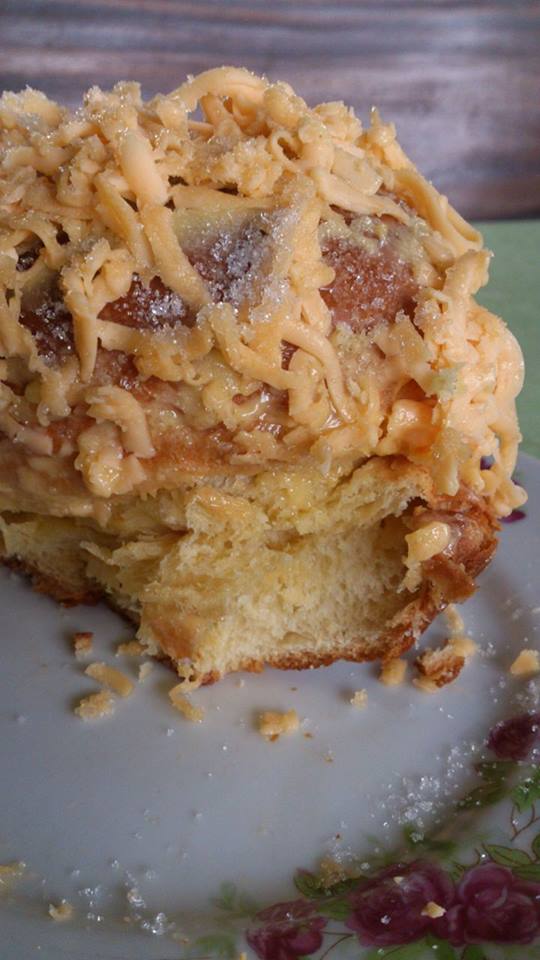 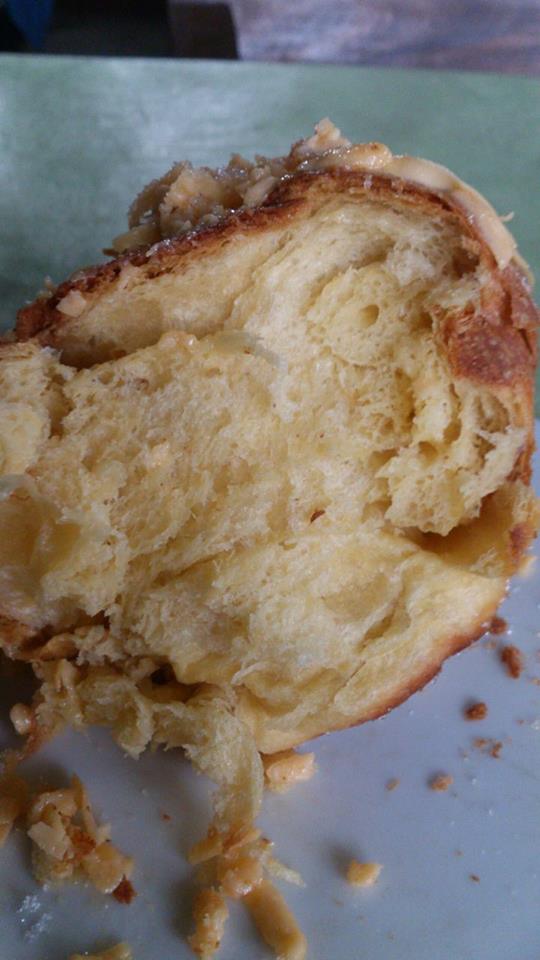 I think a salty aged cheese, grated on top, like Pecorino, would be the perfect topper for these too!  Salty cheese has to go with sweet brioche!  You are really getting to use your oven a lot with school on recess.  Now you can make all kinds of things that you never dreamed of before.  Have fun exploring in 2019

Only Parmigiano, and I think it will really go well with this.  A very strong savory cheese finely grated on top of these, I can imagine the flavors. A gourmet version in the capital city of the country makes a Gruyere-topped one. I think any creamy but dry cheese that you like can work even a Pepper Jack for a prominent family makes a jalapeño ensaymada. Salty cheese and sweet brioche for the win!

they look just so good! Your baking has leapt to new heights with your new oven.  itis just a lovely bake and I wish we could taste and smell, not just look at the pictures.

I loved your pain au chocolat too!

2019 is off to a great start! happy new year Job, I wis you on going sucess in all you do

I did everything by feel as usual. You want to smell and taste it? You can if you make it: https://www.saveur.com/article/Recipes/Philippine-Style-Brioche This an honestly good yeasted old-fashioned ensaymada recipe. I know you can easily modify it for a sourdough version.

Light and fluffy bread makes one take bite after bite without noticing as there's no sense of fullness... I usually stop eating when it starts to feel overly sugary but since you added salty cheese, I don't think I can resist gobbling the entire bread up!

Sweet and savory is such a great combo as with sweet and sour. Savory cured meat, cheese and even plain coarse salt elevate both naturally sweet ingredients like cabbages and bell peppers as well as desserts like caramel buns and ice cream. I'd probably do fine living in your country considering all the sweet and savory dishes it has :)

Happy baking to you too!

I seldom hear from someone that they like the combination of sweet and savory. I'm so happy there's one here in you. I have some more sweet and savory ideas with some having Chinese roots/inspiration. I think you will like them; our taste buds are on the same page!

Great informative post and fantastic bake.  Love the look and sound of this bake.

Look forward to seeing more of your bakes in 2019!

Your new oven is working hard. These look too good to be true. I am doing recipe research right now. Thank you!

I hope you'll have success with your ensaymadas.