Why not just use the flour of six grains? I guess for the same reason one mills flour fresh, but also I think the mediocrity of my blender is working with me here by creating variation in the size of particles. I get some noticeable bits, along with some flour soup.

I accidentally made a very high hydration dough (80%? 85%?), because I forgot that whole grains don't puree the way that quick oats did. Possibly oats are just especially thirsty. I began with more water to compensate for what I thought would be a lot of absorption, and then added more flour when I saw how soupy everything was. I didn't want to overdo the flour, since I was going by feel, and ended up with a much wetter dough than I've worked with before. The stretch and folds were easier, and the shaping went fine, but scoring made it spread very quickly to a diameter slightly wider than the combo cooker. When I placed the loaded parchment paper into the combo cooker (which is much trickier when the dough is this loose), the edges wrinkled to the contours of the wrinkled parchment. The loaf looks wonky, but I'm really pleased with the flavor and crumb (airy, with a little bit of that soaker-like moisture).

Next time I'll use less levain and warmer fermentation, so that a higher proportion of pureed grains can be incorporated. Another option would be to add some starter to the grains as they soak, but I'd have to watch things pretty carefully because I'm not sure exactly how much further along in fermentation this would get the dough once mixed. Also I doubt it, but I wonder if the blender would somehow harm the sourdough culture? 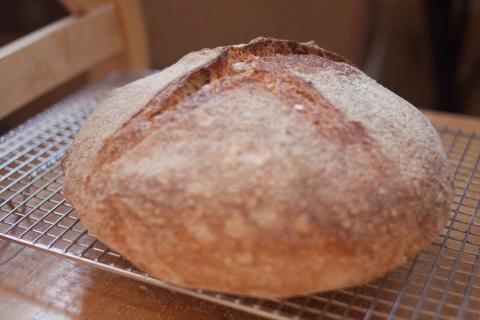 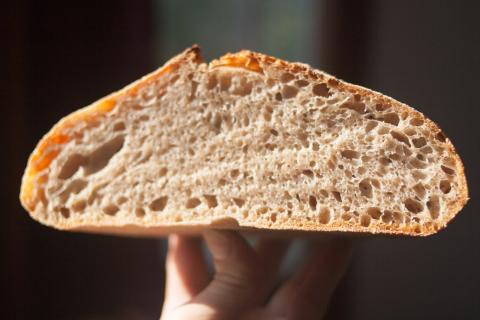 why make purée?  Why not include grain whole like nuts or slow cook before adding?

I feel like everyone who saw this post wondered the same thing. There are some "reasons"--I feel like whole grains would still be too tough even after soaking to bite down on in a bread, I'm a little ambivalent about the texture of breads with large additions of soaker or porridge, I don't have a mill--but ultimately I'm probably just being a contrarian.

The answer to the question, "How to get whole grains into bread and still look and feel like 'Wonder Bread?"

How does changing to a purée affect the dough?   It most certainly changes the bread character when made fine enough to combine into the gluten matrix as opposed to just being surrounded by it. Soaked grains would give up moisture to a lower hydration dough as they cook in the dough, esp the oats.  Porridge has gelatanized starch and it too can increase hydration in a dough without loosing the feel of a lower hydration dough.  Part of the reason left over cooked cereal is so popular dropped into a daily bread dough.  Just don't drop in too much.   Kamut is rather large, at least the whole grains I've gotten ahold of and the best way I found to make sure it was cooked through, was to soak, cook & slightly caramelize in a rice cooker.  Irresistible!  I can't speak for the whole red wheat but it works for rice, wild rice, and spelt.  All have slightly different cooking times and water amounts.

To me, the purée is just a step to dirty more equipment, so yes, why not just add them as flours?  Or simply soak the flours if trying to reduce phytic acid. No mill?  How about dry grind in a coffee grinder? How does the same blender handle unsoaked grain?

Are you stuck with bags of grain and have no mill?  This usually happens to home bakers, myself included.