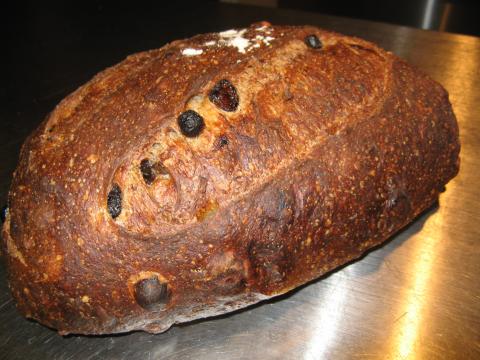 Every now and then I go to Peter Reinhart's "Bread Revolution" for something different. I've been meaning to try sprouted pulp bread for some time, and the time was right. I have a sack of Kamut (Khorasan wheat) that I don't use much because it's just too hard and difficult to mill by hand. Like milling gravel into sand - the resulting flour is very coarse and sandy. I sprouted some a while back, dried it and milled it into flour, which was easier than the unsprouted grain but still time consuming to dry it properly.

This time I sprouted a big jar of it, then whizzed it wet into pulp in the food processor. Reinhart had a perfect recipe to try it out. He used Emmer pulp in his version but one of the options was Kamut instead. Other ingredients are soaked raisins and chopped nuts (I used walnuts and hazelnuts instead of walnuts and almonds as in the original recipe. I try not to support the water-intensive almond industry more than I have to). There is a bit of dry yeast in with the levain, and also a bit of vital wheat gluten in the mix.

Mixing went well in the Ankarsrum. The dough was nice and stretchy, though a bit sticky. 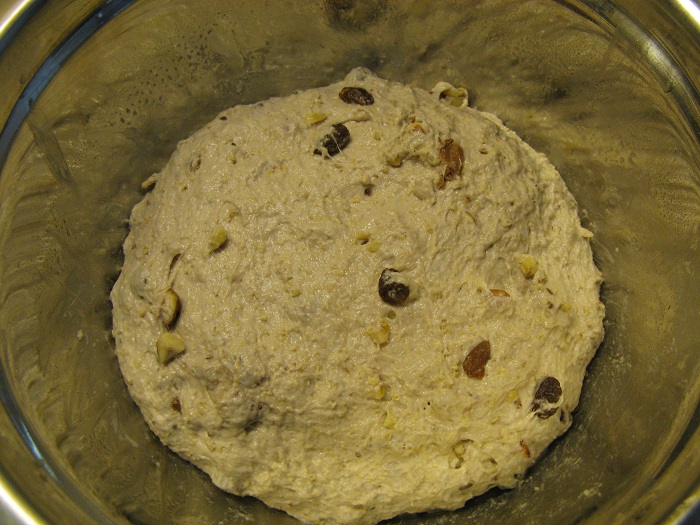 Bulk was only 1.5 hours, and the dough rose nicely. The bit of flour on the top is so I could poke the dough. :) 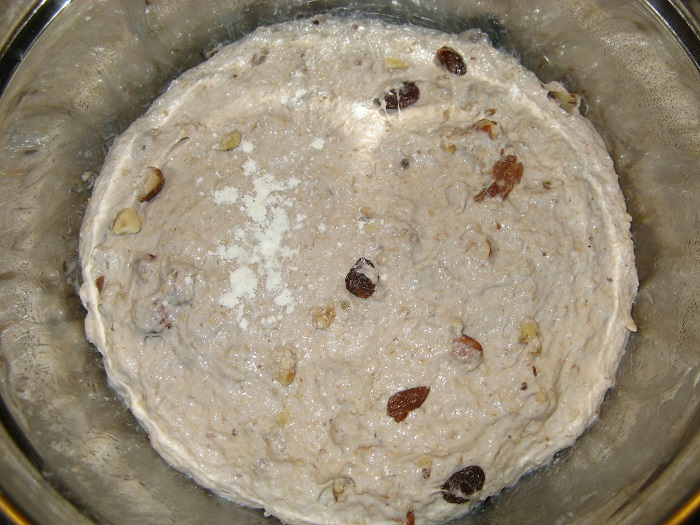 Pre-shaping and shaping went fairly well though the dough was quite sticky (partly because of the fat, wet raisins!). 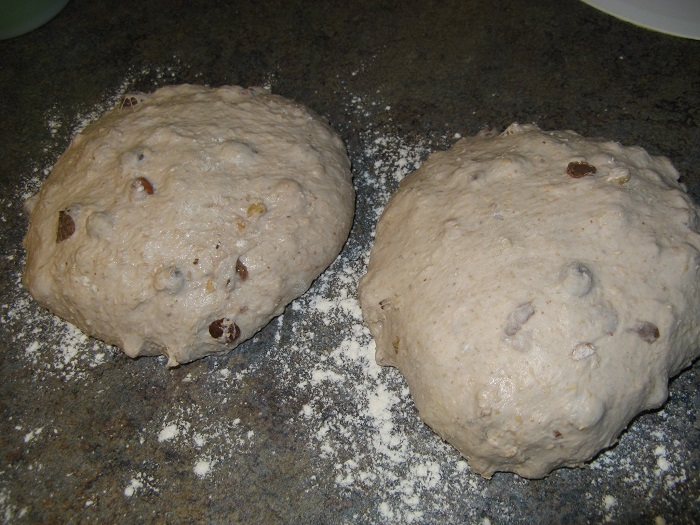 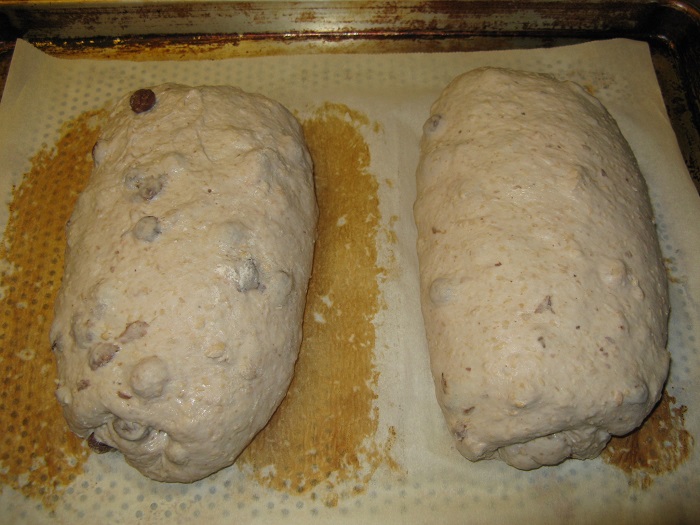 Reinhart bakes it at 460F, with steam. I followed these instructions but in hindsight should have turned the oven down a bit for at least the last half of the bake. It's a very bold bake - on the verge of burned! 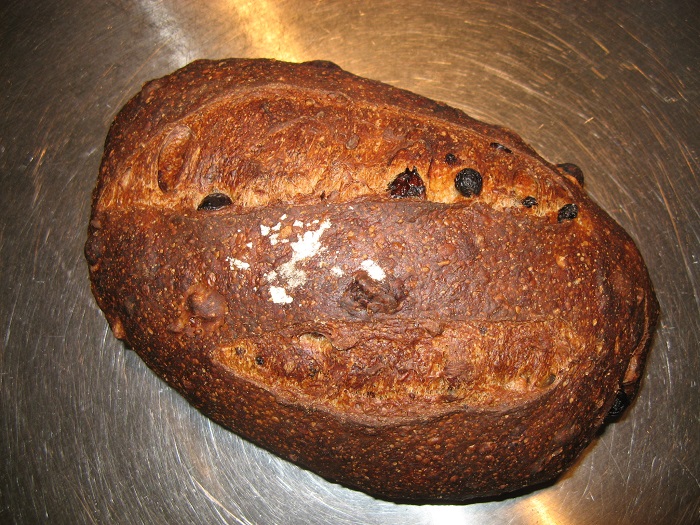 The crumb is very nice and moist. Reinhart suggested that the pulped raisins would dissolve into the dough, but that wasn't the case with the dough roller on the Ank. 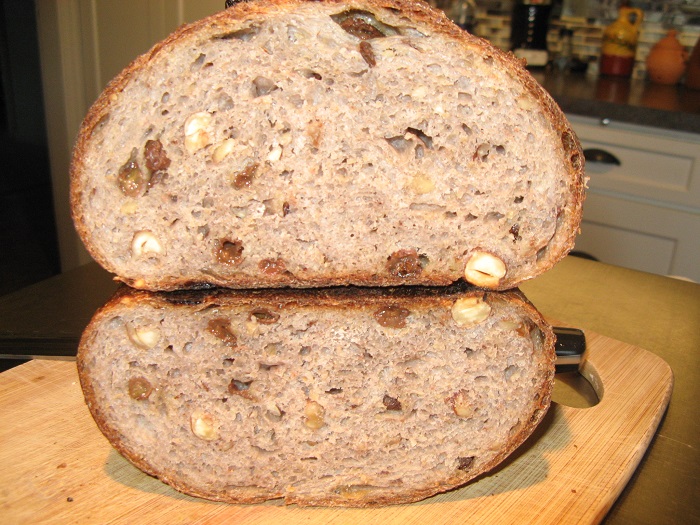 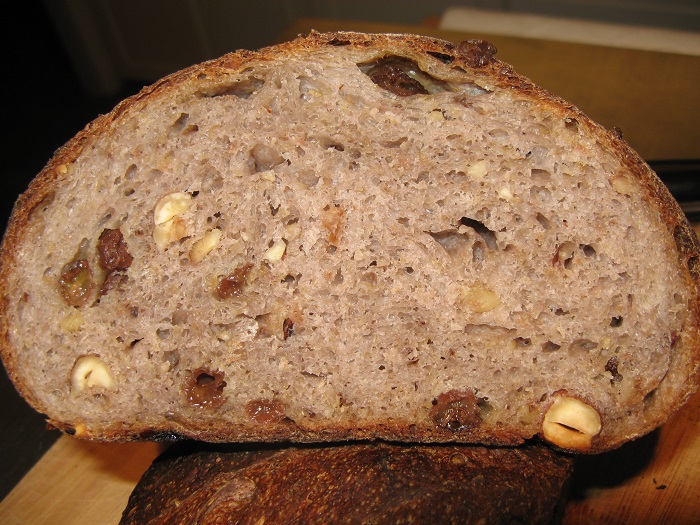 Lovely flavour and texture; I will make this again (now that I have a big bowl of sprouted Kamut pulp!).

Few nuts except peanuts, filberts and pistachios are even close to being water efficient.  Walnut, pecan and Almonds use about 50 gals per oz shell on but even the best nuts use 25 gals per oz or so.  You don't want to know about the orange trees in my Arizona backyard though or many other food stuffs especially meats like Beef.  Almonds got the bad rap for some reason probably because they are mainly grown i n CA where there is a water shortage .

I didn't go into details (because this was a post about sprouted pulp bread, not nuts!), but that's what I meant - that most of our almonds here come from California and, due to the extreme water shortage there, I don't want to buy almonds that use so much of their scarce water. I prefer hazelnuts (filberts) that are grown closer to home in places where there is more rainfall, or Brazil nuts that grow best in intact rain forest and so encourage farmers to not cut or burn down the rain forest.

Anyway, the bread is delicious for sure! :)

Sadly, Pistachios and Almonds prefer the CA climate.:-(  Citrus grown in Florida and Texas manes way mire sense than the ones OI grow in AZ.  I'm going to try and figure out how many gallons i water I used per orange over the last 30 years.  We gave 90% of them to the food bank but still...Oranges are only 33 cent a pound this week at the store - out of season!

I ripped put the grass in the front yard last year and planted rock.  We kept 100 sf of it in the back yard for Lucy but she is 14 years old and won't need it much longer, then it and the orange trees go away forever too.  I am really liking the desert plants, succulents and cactus we have growing now and not cutting grass is a blessing too!

It does smell wonderful, Mini. I was quite amazed at the lovely, sweet, malty smell of the sprouted Kamut pulp. Not what I would have expected! And the plump raisins just make it better, along with the slight purple tint from the walnuts. Reinhart calls it a 'power' bread; I can see why! There's a lot of goodness in there.

I actually really like the look of the crust, I'm a fan of bold bakes, i think you caught this one just in time. I suppose it is just a personal preference thing :)

The inside looks great too.

Yes, when it first came out of the oven I thought it looked almost burnt, but it seemed to mellow out a bit and probably added to the nice flavour. It's good toasted with PBJ. :)

What a lovely and delicious loaf.

I would love to bake this but I do not own Reinhart’s Artisan Bread —in Turkey we do not have sprouted grain flour available so I Thought it is not worth the while. .  I do have the Whole grains Bread and often bake the sprouted wheat bread.  This also includues levain., yeast, VWG and sprouted berry pulp.I find it is even better with Spelt.  Would you be be able to tell me whether yours is more or less the same recipe with inclusion of soaked raisins and walnuts (%?.)

Many thanks and happy baking.

I don't happen to have the Whole Grain Breads book, so can't be sure they are essentially the same recipe, but I wouldn't be at all surprised. Reinhart does change up things between books but I don't imagine it would be too different. The Sprouted Emmer Pulp Power Bread recipe that I used says you can use other sprouted grain pulps (like wheat, spelt or Kamut) and I just happened to have a lot of Kamut grain around. Adding soaked raisins and nuts to your bread shouldn't be a problem though you might need to watch the hydration and either hold back or add a bit of water.