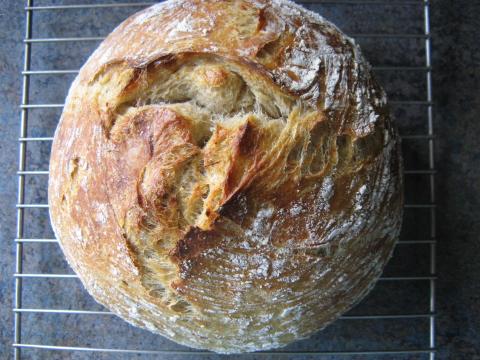 I made a big batch (9) of the Scape & Asiago Levain today - a sourdough with roasted garlic scapes and Asiago cheese. My starter has been a little slow lately, and I also had to add two loaves worth of starter to the batch quite late (a late order), so some of the starter was not at all ripe (smelled like wet flour and had little gas). So when I made the dough last night I took a chance and let it ferment in the cool-ish basement overnight, rather than putting it in the fridge after a few hours at room temperature as I usually do. 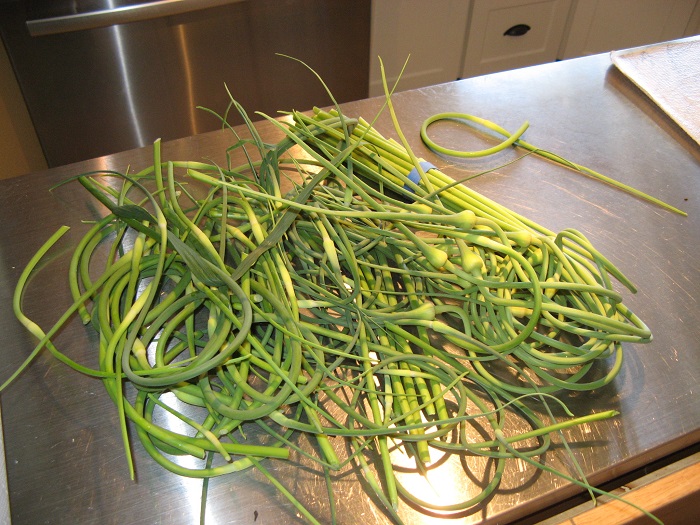 I was thinking of the recent discussions on various forums here about the importance of sufficient fermentation at the bulk stage, and how this contributes to airy crumb and appearance.

It was with trepidation that I went downstairs this morning to look at the big bucket of dough, and found that it had at least doubled, had a nice matt skin on it and it jiggled like half-set jello when I lifted it. It deflated substantially when I eased it out onto the bench but maintained integrity. It was just on the edge of being sticky rather than tacky, but shaped beautifully into nice tight boules with strong skin. It felt so lively, unlike dough that has not fermented sufficiently. 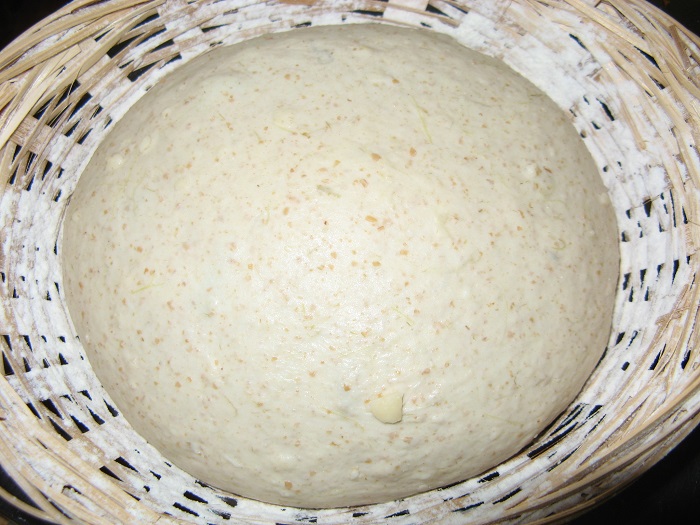 It proofed for an additional hour (about) and then went into cast iron pots to bake, seam side up for a natural burst. And the aroma ... oh, the aroma! 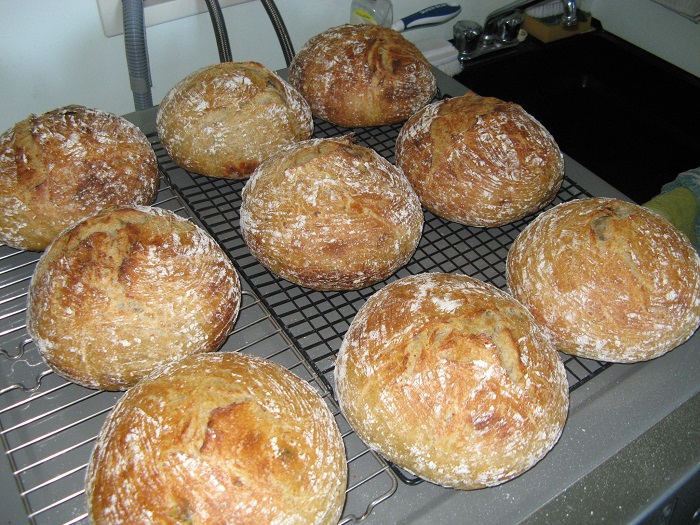 I'm very happy with the way this turned out. Unfortunately, no crumb shot as they are all for customers, but the bread feels wonderful (you know how you can 'feel' the crumb without even slicing the loaf?) and the spring was great. I was so afraid it would be an over-fermented puddle, but that was not the case. Full fermentation really does make a difference! 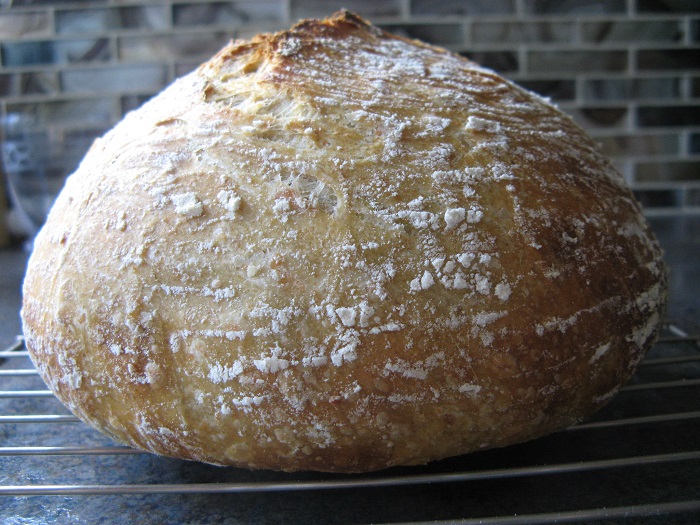 Your loaves are beautiful, and your words gave me an "ah-ha!" moment.  I am a very inexperienced (unless you count my bricks) sourdough bread baker, and you have just identified one of my errors.  Thank you ever so much.

Very kind words, indeed. I've been baking for customers for several years now and make hundreds, if not thousands of loaves every year, and I still get "ah-ha" moments. :) The difference between under-fermented and perfectly fermented dough is quite profound, especially with high hydration sourdoughs, and it's worth the effort to do some experimenting so you can experience it yourself.

First - your loaves look remarkably great! But as I read it I thought of a recent experience I had which was similar - when I went to shape the dough it deflated considerably. The bread turned out fine - but not with as high a rise as your loaves seem to have (but my starter wasn't strong that day).  I keep thinking I should make enough dough for two boules and shape one at what would be the onset of bulk and shape the other after a long bulk to then shape and proof. I keep wondering, why do we not let the majority of the fermentation happen after shaping rather than before. Just curious if you have any insight into that thought.. thanks!

"I keep wondering, why do we not let the majority of the fermentation happen after shaping rather than before."

Part of shaping is to establish some structure for the eventual loaf, and that includes creating some surface tension.  Too much fermentation thereafter can threaten the integrity of the loaf, both surface and inner workings.  But like you I have often thought of playing around with the length of bulk fermentation and proofing time to see what happens.  So far I have stuck to a single path each time.  But maybe some day ....

I think you need to do a longer bulk ferment to give the yeast and other beasties the opportunity to populate the entire mass of dough. You might notice when you dump out a ball of well-fermented dough, that large bubbles appear. These need to be re-distributed (or popped at the edges) before shaping the loaf or you will get those big caverns in the loaves. If you do a short ferment and a long final proof, I think you might get those big caverns full of gas in the loaves at baking time (when you can't move them around anymore!).

The chancy bit is getting the dough fully fermented without exhausting it, so there is some 'push' left in it for the final proof and oven spring. And as that changes with time, temperature, strength of your starter, type of yeast in your starter, and about a million other things, I think maybe I was just lucky this time!

Thanks for this explanation! I've been playing around with bulk fermentation and final proofing, but its been kind of a guessing game!

Your customer should be doing cartwheels!  Those are beautiful loaves with amazing oven spring and wonderful crust.  What temperature did you bake them and for how long?

These loaves were smallish (scaled to 700 grams wet dough). I pre-heat the pots at 475F, then turn it down to 450F after loading. They bake with the lids on for 20 minutes, then the lids are removed, temperature turned down to 425F and baked for another 20 minutes. Internal temperature just over 200F.

I was hesitating if I should try incorporating them in bread this week and then I saw your post! What a coincidence! I worried they might be too strong in bread raw but you just gave me the solution of caramelizing them. Thank you for your inspiration!

Sufficient bulk fermentation time is truly detrimental to dough structure. The dough can be shaped with much more ease without serious degassing when fermented properly. The spring you got is enchanting! Really good job!

Oh yes, do try roasted garlic scapes - they're amazing! I chop them up, toss them with a little olive oil then roast them until they are bright green and tender. Yummy!

I mean it's a determining factor, not "detrimental". Sorry for the confusion :)

I flour the dough and the basket lining, but, when it comes time to turn the basket over to get the dough out it won't come out.  I end up fiddling with it and it deflates.

I'm finding that sticky dough occurs for a couple of reasons - either the dough is not fully developed / fermented, or it has gone past peak and has started to degrade (the same can happen with mixing too long in a mixer).

My baskets are so well seasoned now that I hardly have to add any flour at all. I may have used brown rice flour at the beginning but now just a light sprinkle of bread flour is sufficient, as long as the dough is properly developed and shaped to have a nice skin on it. Even some of the stickier doughs with weak flour and add-ins (like soaked ground flax seeds, oat porridge, dried fruits, etc.). But when the baskets were new I did have a few sticky messes!

proof.  It looks like it was right on the edge of collapse - Chad Robertson would be proud of you.and a young levain for part of it to:-)  It has to be great tasting bread with plenty of sour.  This is one fine bake with the gariic and asiago putting it ioer the top.  Yummy!

If fragrance and appearance are anything to go by, it probably was tasty! I wish I had kept one for us, but maybe next time.

Off to make the starter for a 'bag-end' (multi flour) sourdough for us. :)

Fermentation is really important and I always try to push it to full fermentation. I think I am getting a good feel with bulk fermentation but proofing is still difficult to time.

I think we have to sit up 24 hours a day with our eyes glued to the dough, so we can catch it just at the right moment! With all the seasonal changes in temperature and humidity, not to mention other factors, it's very difficult to judge sometimes and almost impossible to plan.