Playing with my food

Playing with my food 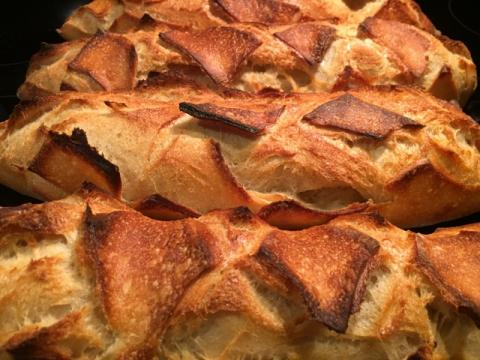 Another batch of Vermont SD, ho-hum.  However this time I decided to score these differently as well as some pre-shaping changes and a more gentle final shaping.  Which I'll attribute to the shorter and slightly stubbier look of these

In the spirit of Abel's Ziggy scoring, which I've done  few times now - I decided to try a cross cut, "x's" all down the length of the dough.  And wound up with two distinct looks.

On the first two baguettes, I used a ceramic blade but didn't like the drag.  So I switched to my regular curved lame razor blade for the final two.  And I like the results much better.

Playing with my food is fun! 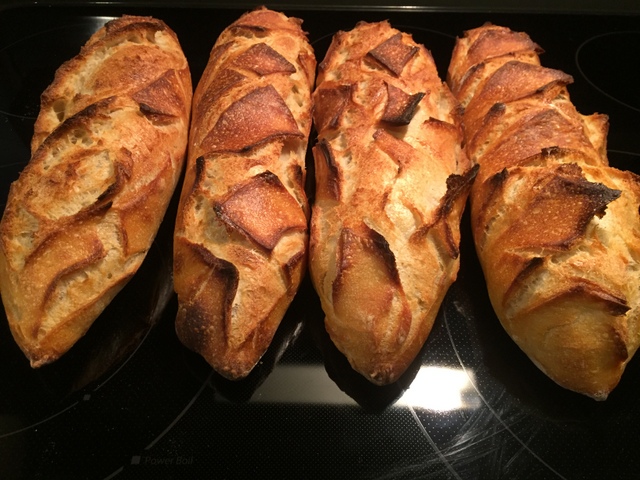 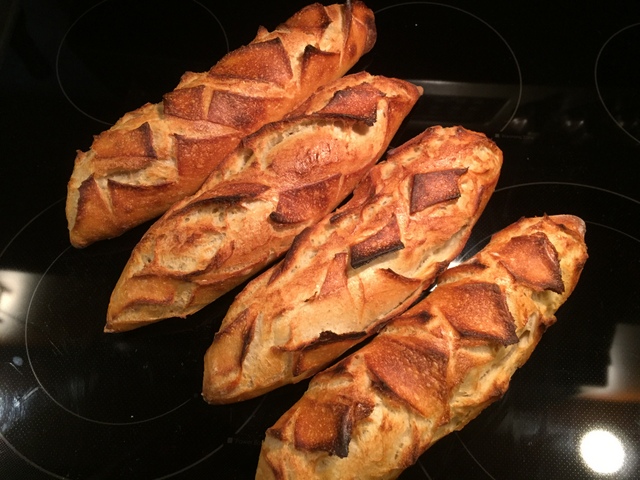 I love the different scoring and of course, they all have that gorgeous colour! I would love to be able to bite into one!

At least I think that it did in terms of a more open crumb and a softer, and perhaps less taut skin.  So there is likely a push/pull thing here between a more gentle shaping and a sufficient enough tautness to the skin.  However, in this instance, I don't see any downside to this lone experiment.

The look of the crust has a somewhat dragon-like appearance.  Just a wild hair (hare?) that had to be satisfied.  And another "trick" in the book.

in the traditional "barrel-shape", and two were pre-shaped as mini-boules.  In both cases,I tried to use a minimal amount of pressure on them when forming.  For final shaping, I attempted to fold the dough in a looser manner.  The results seemed to be about the same for each pre-shape.  No less purposeful, but a little hard to describe in few words, but I'll take a stab at it.

I have never done it the standard way of tucking my thumb in and then using the heel of my hand to seal the dough.  Can't say why, but I just didn't and don't.  My non-traditional way - "pulling up and over" on the folds from top to bottom and then sealing with the knife-edge of my hand before the rolling out.  What I did here was to flatten the dough out gently, ala the Hamelman demo - but even more gentle than he does, and then to use both hands to "cup" the dough from top to bottom in three downward folds, and then continue with rolling it out.  If that sounds kludgy, well, that's the best that I can do with words.

Since I don't have any video of a before and after type of shaping, It isn't that easy to describe.

love how the different scoring patter has changed the whole look!

it is easy to do something like this.  And then there are the folks who do all sorts of phantasmagorical scores and patterns on their breads.

and I was thinking of trying this - just because, for a few days prior.  I figured that I'd get some good "lift" as the dough bloomed from the oven spring.  But the tips that stick up in many places was a pleasant surprise.  I'll have to revisit this type of score now and then.

to do the normal boring one anymore.  I think you should try a waffle cut though.  Lucy says that way Don Baggs would get way more diamonds, they would be smaller, but maybe 3 per row and 8 rows?

Phil Knight's original Nike waffle iron and having a go at it.  But it is probably under lock and key at the Beaverton HQs.  If Lucy is so hot for a waffle cut, maybe she will get the gumption to grow some fingers so that she can have a crack at it herself.  Gorgeous eyes and a sexy snout will only get her so far in this world.  Her biggest immediate challenge is that she has 4 stubby timbers.  Once she has that one worked out, the rest should be easy.

I like the way the scoring has lifted up in some places and opened up in other places. It's like a designed pan rustique. If you know what I'm getting at. A Vermont Sourdough to-boot which is one of my favourite go to recipes. Lovely.

The formula for the V SD is so simple and straightforward, and so tasty, that is an easy go-to for me too.  Which makes it hard to get around to baking a multitude (okay, maybe 6 or so) of other pain au levain's that I keep in abeyance.  I'm sure that I'll play around with this cut some more.  I was surprised at how inefficient my ceramic knife was compared to the curved razor.  The ceramic worked so well on the Ziggy breads - but they were "girthier" as full batards rather than more baguette-like, and therefore more delicate, as these were.  Always something new to learn.

Did you observe any effect that scoring had on the loafs? I mean did it promote upward rising or what?

They are nice bread whatever!

oven spring, if that's what you mean.  I have a few blog entries, including the previous, which demonstrates that the amount of "lift" here doesn't skew much from other, more traditional scoring methods.  This dough was going to get big during the bake no matter what I did to it as long as it has adequate time to rest.  After bulk rise, the dough goes into the refrigerator for about 12-18 hours total rest before baking.