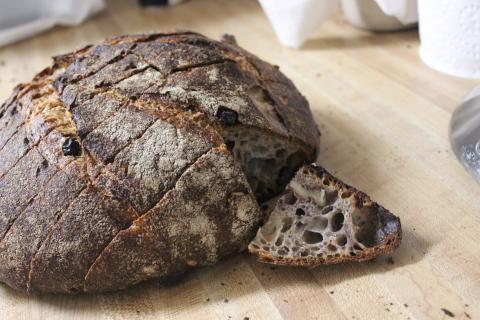 My favorite bread of all time! I haven't posted in a while! I got a new job, but I quit so now I have all the time I want to bake all the bread I want!

I love this bread! There are no words for how delicious it is.

It looks fabulous! I love cranberries in bread, and that sounds like a wonderful flour blend. It's good to have time to bake, innit? :)

I also love, love, love that dark bake you got on the crust. Care to share your recipe and method?

Sure! my method was:

I was making my 50% wholewheat bread but I ran out of wholewheat flour which is why I added the spelt and the rye! So feel free to just do 500g wholewheat!

Anyway, for the autolyse I mixed the flours and all the water and let that sit for an hour and a half. Then I added the starter and folded it in but not very thoroughly. I took the dough and did slap and folds for 6 minutes! I haven't done slap and folds in SO long because it scared me and I felt like it overdeveloped the gluten, but it worked out perfectly here since I shortened the bulk. Anyway, slap and folds for 6 minutes before adding back to the bowl. I let that rest for 40 minutes before folding in the salt. After that, I proceeded with 5 stretch and folds every 30 minutes. I mixed in the walnuts and cranberries during the 4 the fold (gently mixed in, taking into account that the 5th fold and the shaping stage would disperse them further). The dough should hold its shape after the fifth fold and dome around the edges of the bowl. After the 5 stretch and folds, I left the dough alone for the remainder of the bulk ferment until it started getting a little bubbly on the surface. So it was in the bowl untouched for about an hour and a half. After that I took the dough out and onto my unfloured countertop and loosely shaped it into a tight-ish ball. Let it hang for twenty minutes, then I divided the dough in half and pre-rounded each piece. Left the two rounds on the counter for another twenty minutes, smooth side up (exposed to the air). After the twenty minutes, turn the dough ball over and shape tightly but without deflating. I like the shove the dough toward me to tighten the surface method. Place in a floured banneton, let proof until ready (two hours was good for me). I usually prefer to proof shaped dough in the fridge overnight, but there was no fridge space this time haha. Anyway, after the dough was proofed I placed two dutch ovens in my oven and preheated it to 500F. Turned out the dough and scored, then baked covered for 25 minutes. After 25 minutes I took off the lid, brought the temperature to 450F and baked for another 25 minutes!

I love seeing how others do their bread and this is perfect! Thanks again!

You've got such a skill for getting that amazing airy crumb, even with lots of whole grains and add-ins!

Thanks so much for the full formula - and those yummy, yummy photos (I can smell that loaf, I swear).

thank you lol! I get a little insecure when I post on this site sometimes because I worry my crumb is mediocre compared to everyone else's glorious bakes!

Beautiful!  Love the crumb and love the combo of add ins!