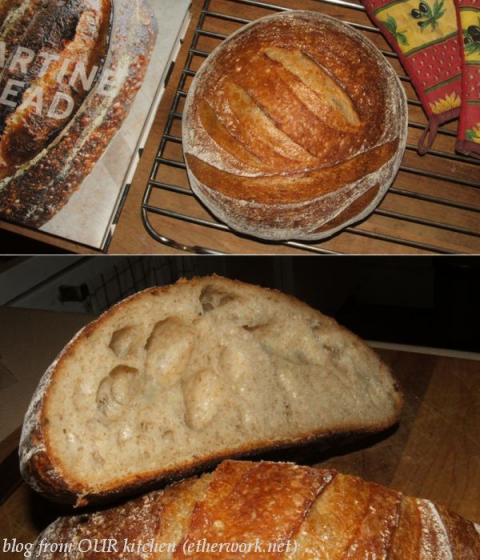 After recent successes with natural yeast (it turns out that even I, a repeat offender of saccharomycicide - 2008, 2012, can be remediated!), I decided to try Tartine Bread again. But with Jane Mason’s starter.

Taking a deep breath to re-read Robertson’s 26 page recipe (and you thought I was verbose!), I followed (mostly) his instructions to the letter again… and muttered variations of the same words I wrote in 2012:

Why on earth would editors allow the first basic recipe (a recipe that is used throughout the book for the other bread recipes) to be a meandering 26 pages of prose?

-me, 1st Attempt at Tartine Bread: Looks good, doesn’t it?

Except I’m not very good at listening for the timer bell. The first resting period after mixing the pre-dough (before adding the salt) was closer to an hour than the recommended 40 minutes. Or was it an hour and a half?

Also this time around, there is something I don’t remember happening at all. When folding and turning the dough, it began to feel as if it had been oiled! The dough felt beautifully smooth and silky. It was remarkable.

Shaping was easy. But I’m afraid I skipped the bench rest – I really can’t be expected to remember all of those 26 pages….

So shoot me. If the bread hadn’t turned out so well, I swore that next time, I’d include the bench rest. But, really, I cannot imagine how this loaf could turn out any better!

What a difference from those earlier disasters!

There are so many things about this bread to be thrilled about! The oven spring. The shiny holes in the crumb. But most of all, the complete lack of sour flavour. At last!

(Please see blog from OUR kitchen for more photos and my take on Robertson's recipe for his Basic Country Bread: http://etherwork.net/blog/tartine-bread-success/)

I am very happy for you that your loaf turned out do beautiful! I bet it tastes great!

Thank you, Danni. You're right; the bread tastes wonderful. The crumb is soft but not mushy and the crust is chewy and nutty flavoured. We cannot get over just how wonderful tasting this bread is!

The Tartine recipe Chad offers is his gift to put you on a path of breadmaking exploration.  Recall the test baker stories in the book where each adapted the recipe a bit to suite their needs and challenges?   All of which produced great results.  This is where you come in.  Explore and make the recipe your own.  Keep track of the small deviations from Chad's template and you will soon dial into something that is unique to you and your cooking style.   By the way your loaf looks fantastic!

Thank you for your kind words, Mark.

And yes, I agree that keeping a journal is a very good idea. I have made copious notes already (here's hoping that I'll remember to pay attention to them...).