My work schedule is set up so that I get every other Friday off.  Or, as my employer puts it, I'm on a 9/80 work schedule.  That means Mondays through Thursdays are 9 hours a day, one Friday is 8 hours, and the following Friday is off.  I love it.  Having a 3-day weekend every other week is a wonderful thing.

So, this past Friday, I got to play with some new recipes.  The first bake was an Irish soda bread.  It turned out wonderfully, in a craggy sort of way, with plenty of spring in the oven.  We took it to a neighbor whose mother had died a couple of days previously.  Consequently, there are no pictures.  It was well received; so much so that I’m not sure any of the extended family actually knew of its existence.

The second bread that day was something I'll call an Irish oatmeal porridge bread.  It features cooked steel-cut (or pinhead, or Irish, or Scots) oatmeal, some bread flour, some whole wheat flour, plus some molasses to help boost the flavor.  If you aren't acquainted with steel-cut oats, they are fairly analogous to cracked wheat.  Each oat kernel is broken into 3-5 pieces as they pass through a set of rollers at the mill.  The texture is quite different from rolled oats, even the old-fashioned variety.  The cooked porridge is more nubby, a bit more al dente.

The dough was a bit drier than I expected.  There are two factors that may have been in play.  The first is that much of the liquid in the bread is contained in the porridge.  If one were to measure the pre-cooked and cooked weight of the porridge, they’d know how much water is lost during the cooking.  Of course, one would have to think of that in advance.  The second factor is the AP flour in this particular batch of bread.  It’s the Eagle Mills Ultragrain flour, which contains 30% white whole wheat flour along with the usual patent flour.  The extra fiber content makes it more absorbent than a typical AP flour.  Which of those was the greater influence, I can’t say.  What was clear was that the dough required more water, probably another 50-60 grams worth before it softened to something less than bagel dough.  Note that the dough didn’t feel particularly dry but it was quite stiff to knead.

The dough was bulk fermented in a covered bowl, then shaped into a loaf that went into an 8x4 loaf pan.  The final proof, covered, went until the dough crested about ¾ of an inch above the pan rim, at which point it went into the preheated oven for baking.

The first impression is favorable:

Well, yes, a longer final proof would have been a good idea:

If you look closely enough at the crumb, you will notice a compression zone where the dough was in contact with the pan.  It appears that the outer extent of the loaf suffered some compaction before the top tore loose and released the pressure.  The rest of the crumb is very uniform and is a splendid base for my sandwiches this week.  The bread is firm and moist, probably an artifact of the moisture in the porridge, as well has having a degree of chewiness that is definitely due to the steel-cut oats.  The molasses, which is one of my favorite flavors, is front and center in both fragrance and taste.  I suspect this would also be very good toasted, with nothing more than butter spread on it.

I also managed to squeeze in a batch of sandwich rolls on Saturday, yielding 6 hotdog buns and 6 hamburger buns.  All in all, it was a fun time in the kitchen this past weekend.

I get the same issue when I use loaf tins, as per this loaf: 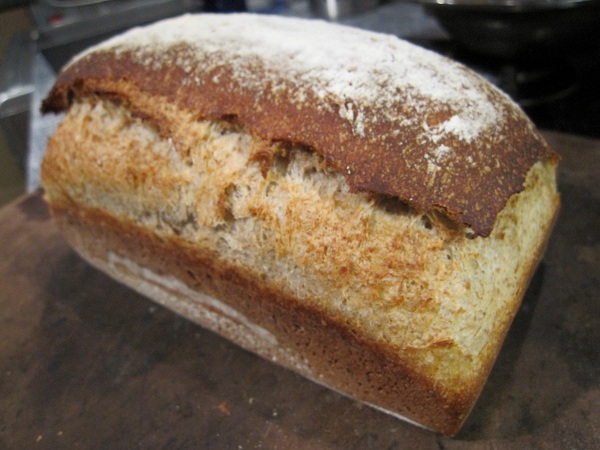 I know my oven is hotter at the back than the front so I wonder if that contributes to the loaf bursting out on one side?

Yea!  Folks were asking about ya!

Really?!  Who was asking?

I did a long work contract of about a year which limited my time for making breads so that's what made my posting die off.  I did keep an eye on people's blogs though.  I am early retired and am now free again so the baking has resumed.

In fact I'm now doing a lot of voluntary work for support centres in my city centre who cater for the homeless, vulnerable and socially excluded.  I now find that I am baking about 6 large focaccias every week along with 15 ltrs of freshly made soup as well as cooking hot meals for about 20 people one day a week.   The focaccia goes down a bomb and they ask for it with their teas and coffees rather than just with the soup.

I could really do with a bigger kitchen and a bigger mixer if I'm going to keep this up !  My mixer will take about 1kg of dough at a time and then it's dancing around the kitchen counter "Gangham style" !   It's 70% hydration so I'm mixing on high speed a la Crocodillo ciabatta.  All good fun though.

in retirement or no is noble indeed.  Well done and

In the loaf that I posted, it's purely a matter of not having allowed final fermentation to run far enough.  Since this was a new one for me, I didn't have a basis to know how much expansion to expect.  It is more than had been expected, obviously.  Next time, I'll let it expand more before baking.

pan twice that big and scored on top but it was a bit under proofed maybe too.  Maybe this needed to be in 2 pans and scored :-).  You ae getting Mega Zola Blue Spring!  That is what oats can do to bread sometimes.  I had a Clayton oat bread explode too but he warned that it would rise 'majestically.   That was pretty understated.  For the longest time I thought oats and potato belonged in every bread:-)  Had to be tasty for sure!

As a matter of fact, my early concern was about getting enough expansion to fill the pan adequately without over-proofing.  Now I know that this bread has plenty of volume.  It just needs to be given more time to stand taller before baking. Slashing the top may be helpful, too.  I wonder if the porridge, which is a pre-gelatinized starch, functions like a tangzhong.

And yes, it tastes wonderful!

I wondered about using steel cut oats in bread. Now I know that it makes a great loaf. Well done!

I like rolled oats, too.  Each has a different texture in the bread, plus bringing a subtle nuance in the flavor.  Do try it.  Just be sure to cook the steel-cut oats first.  Otherwise they will feel like birdshot in the finished bread.

Wow, blew it's top, didn't it? :) Given that result, I think I would put a bit less dough in the pan as well (one never knows ahead of time, wondering if it will spring well enough or not). And I usually find scoring my pan loaves quite deeply down the centre helps the shape.

So, did you use part of the recipe water to cook the oats? As you say, it would make sense to weight the porridge before and after cooking and top up the water after. I often wonder how to calculate hydration when incorporating a cooked porridge into breads. I suppose that would be the best way.

Although, really, it looks more like a partially-opened lunch box.  The tear happened along one edge of the pan and the top crust stayed hinged on the opposite side of the pan.  That let the loaf retain most of its shape, instead of winding up with an ugly tumor bulging out.

Scoring the loaf could very well help.  I'll bake this again in the near future and see what happens with a score.

Yes, most of the water is in the porridge.  There's also an egg, plus a negligible amount of water in the molasses, plus the small amount used to hydrate the ADY.  And yes, a pre-cook and post-cook weighing would help determine how much water is needed to replace the cooking loss.

Well done Paul.  I've made similar porridge breads before.  If it wasn't moist enough I would just up the overall hydration and you will be good to go.

I have Fridays off during the summer.  It is a nice benefit if you can get it :).

I was thinking of your porridge breads as this one was going together.  This one definitely wanted more moisture than it started with.

Having every other Friday off is great.  A previous employer had a summer schedule like yours where every Friday was off.  I actually like this schedule better.  There's something about 10-hour days Monday-Thursday that gets very tedious, especially if workload is heavy and OT is required.  Nine-hour days seem a lot easier to deal with, for some reason.

Hello Paul: Since you advice me on the "re-hydrate my sourdough" I search your blog and found your last post dated above. I did not see any of your picture because it was blocked with 3 huge picture of company named "Photobucket.com".  I can not read your entire information and I can not delete the "photobucket" info either. Just want to let you knowthat all your pictures was blocked.

Photobucket figured they could hold their users to ransom and wound up with lots and lots of bad press as a result.  They haven't backed down but there is no way that I will pay upwards of $400 per year to them to host my photos.  I haven't started to rebuild my old posts yet, hence the ugly Photobucket notice where each photo used to be.

On the Photo bucket problem, I had written to Floyd last night because this same company had blocked the lesson on Face book. I went to check the sourdough making information and it was blocked 3-4 times with this huge logo from them. I can not read the information because of them so I notified Floyd last night.