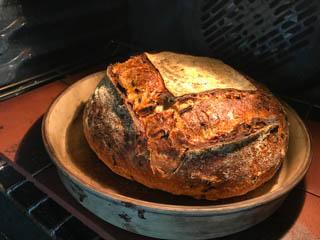 The book "Sourdough" by Sara Owens was a surprise gift in more ways than one earlier this year.  First, I was not expecting it, had not asked for it, and in fact, did not know about it.  Second, it has proven to be a wonderful, inspiring and tasty addition to my library!  Others have already posted my favorite bread from the book, the Honey Oatmeal Spelt recipe, so I decided, finally, after what must be two years of lurking, baking, and silence since my last blog entry, to post something for once.

The book title of this recipe is Wild Rice, Herb and Almond Levain, but in the formula she notes that the herbs are "optional".  I am not a great fan of herbs in bread unless the bake is for a specific meal or use, and I know the herbs chosen are appropriate for that setting.  For general baking and unpredicted use I consider the herbs too limiting in what the bread can be used for and served with.  So no "optional" herbs in my bake.

No formula posted here either since I baked it straight out of the book with only very minor deviations.  There may or may not be legalities to posting the formula, but regardless, I do not do it unless I have made what I consider a material modification that makes it mine, not the author's.  That's just me.  Others feel different.  That's up to them.  I will note, however, that fully a quarter of the flour in this loaf is my home milled white whole wheat flour, plus 5% Wingold Dark Rye flour.  The recipe calls for medium rye but I don't have any of that and I have "tons" of dark rye.   The rest of the flour is Guisto's Artisan Select Malted.  The loaf also contains nearly 20% (Baker's %) cooked and cooled wild rice and 10% toasted, blanched, slivered almonds.  If my Breadstorm numbers are correct (not guaranteed!) then the hydration is almost 77%.

This was a fun bake, and quite challenging.  The dough made up as a very wet dough: 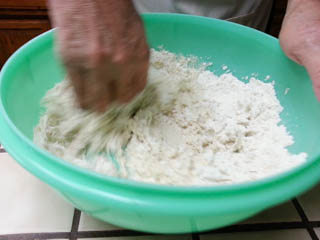 but it settled down quickly after an hour autolyse, and once the wild rice and toasted, slivered almonds were incorporated. 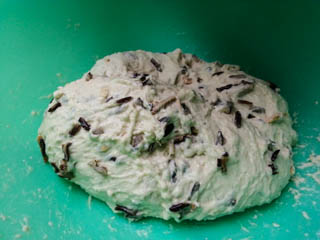 The process for this dough after the main mix and autolyse used a four hour bulk fermentation with stretch and folds, (I use two letter folds at each turn) every 30 minutes for 3 hours, and then an undisturbed fourth hour.  The dough was then divided and preshaped, as a single boule in my bake.  After 30 minutes of bench rest it was final shaped and placed in a linen lined baneton in a plastic bag, and retarded ovenight in the refrigerator.  I use a small wine refrigerator for retarding so I have temperature control, and this bread was kept at 42F for 16 hours.

I baked the loaf en cloche directly out of the refrigerator.  The oven was preheated to 505F (as high as my GE will go without locking the door!) with the cloche baker inside.  I slid the dough into the hot baker with a Super Peel and baked under the dome at 505 for 7 minutes.  At the 7 minute mark I turned down the temperature to 485F and baked under the dome for another 8 minutes, then the dome lid was removed and the bake continued for another 25 minutes at 485F.  Finally, the oven was turned off and the door propped open a bit, leaving the bread inside for 10 more minutes.  I took this final step because I knew the dough was very wet, and with the wild rice it would tend to stay that way.  The extra 10 minutes in the "falling oven" helped let some of that moisture migrate out of the dough and evaporate off without spoiling the crust.

The baking strategy worked well, producing very nice bloom and spring, a boldly baked crust and an attractive appearance that I was quite pleased with: 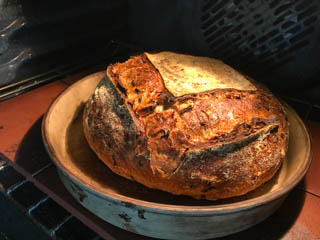 The inside of the loaf is as pleasing as the outside: 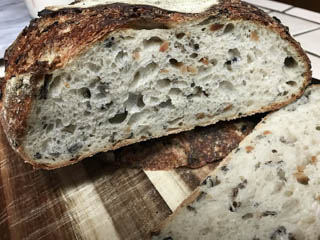 There is a good distribution of large and small holes as a result of the good spring this bread attained, with plenty of wild rice and almonds in evidence.  The crumb has a cool, creamy texture, and the wild rice lends it a moistness that does not chew up "gummy".  The almonds retained their crunchyness, and that wonderful flavor that toasted almonds exhibit.  All combined this has been a wonderful bread to look at, and to eat.  The flavor is not strong in any direction, with a mild sour that we prefer over strong tang, and with a crisp crust that I value highly in sourdough breads I bake.

This formula is a keeper, and I would encourage everyone to check out Sara Owens' "Sourdough" for the many interesting recipes she presents.  Note, however, that the book is about Sourdough as a topic, not about sourdough bread as a topic.  There are many, many non-bread recipes in the book, from pies and cakes to tarts and empanadas, and they all use sourdough starter in one way or another, and again, not always specifically as a leavening agent.  All of the many I have tried taste great though.

Thanks for stopping by, and do visit again.  Perhaps I will post something again sooner, rather than later, this time.
OldWoodenSpoon

...as yours always are, inside and out. I also find that herbs can interfere with a bread's 'neutrality', and seldom add them, unless intended for a specific purpose. Wild rice makes a wonderful and inspirational addition, and almonds surely, as well. I like that they are generously supplied.

It's always a treat to hear from you, and to share in what you're baking. One of the first formulas I tried as a new member at TFL was one of yours, Chocolate Cherry Stout Sourdough. Man, was it great! Love when the beer hits the flour, that cloud of aroma that erupts from the bowl! Happy Baking!

but I cannot take credit for that Chocolate Cherry Stout sourdough, although I would love to as it is, as you say, an excellent bread by the look of it.  That was by "WoodenSpoon" however, and I am "OldWoodenSpoon".  I am, however, the older WoodenSpoon, not that it matters, but I do claim innocence for any "handle" confusion. :)  Clearly it is an easily mistaken identity.

I thank you for pointing out that recipe, though.  I will have to give it a try because I do love "that cloud of aroma that erupts from the bowl"!

I did mix the two of you up, and will observe more carefully from now on, but I stand by the rest of my message, your bread looks wonderful (I bet it's great toasted), and yes, please do try the CCSS - the only thing I regretted was that I had purchased just one bottle of the stout, when I would have thoroughly enjoyed having some to drink, as well!

Hope to see a post from you for Homemade Bread Day!

but it looks very gorgeous. A great bake indeed! I'm not a fan of herbs in bread too except when it is for a specific meal like what you've said. Almonds surely made it super tasty.

I am not that familiar with details of wild rice either, but I have learned that it can be very hard to find in my local stores!  I had to drive several extra (rural) miles to get to a store that carried it on the shelves.  And then I learned that it is quite costly, at $5 USD for a small box containing about 1 1/4 Cups of the "grain".  The rice is not a big contributor to the flavor of this bread, but it plays a big part in the enduring moisture and "tooth" of the loaf.  It is, as you surmise, the almonds spread throughout that add their special flavor note to the medly of whole wheat and rye, and the boldly baked crust.

Thanks for stopping by.
OldWoodenSpoon

bread with wild rice.  PR also did a wild rice and onion bread that I love too.  It is one of my very favorite breads of all time and I have made many variations of wild rice bread with all kinds of stuff in them.  Now I have another one to give to Lucy and have her mess with it.

Yours is beautiful inside and out,  Well done and happy baking OWS

I am certain, when dilegently applied, that Lucy's considerable talent as a baker will come up with a tasty use for toasted almonds/slivers.  I look forward to reading about it.  Don't overlook the wild rice in combination.  It should make a toothsome addition to many breads.