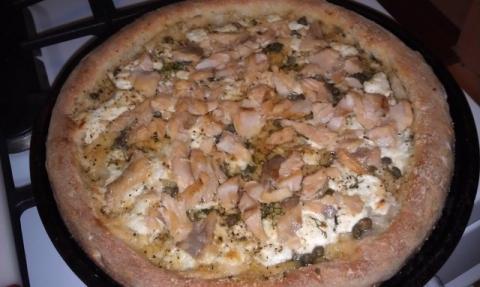 Hello my friends at The Fresh Loaf.  T here with another idea for you to try with your favorite pizza dough.  This article was written back in 2012 and I have since become a much better bread baker, but don't be surprised that I used Store bought Pizza dough *GASP*!!  I hope you enjoy!!

I had a chance to score myself some salmon from a friend of mine, Rick. The caveat was I had to cure and smoke half of it for him as payment for the half I could keep, which is not a bad deal for both of us. He delivered 10 or so rather large chunks of salmon he caught from lake George that I cured with salt, pepper, brown and white sugar for 3 days in my second refrigerator. I smoked it at 160 degrees until the internal temp came to 145 and then vacuum paked it after cooling. I delivered his half and kept mine for a rainy day. Unfortunatley, the rainy day turned into Hurricane Sandy, to which at this point of the story I send my regards to the people whom are still struggling through the strife it has created. My heart goes out to you all.

Caper appreciation 101. Class is in session.

My wife and I indulged in a mixed plate dinner including the salmon earlier in the week, but there was much left over that I had to use up. The following is the result of a little brain-storming that turned out to be very satisfying. You must realize that smoked salmon goes quite well with bread and cheese, as well as wine. These items gave rise to an idea: Pizza.

I did not have time to make my own dough for this recipe, so I stopped at my local market and purchased some fresh dough, which is in my opinion, excellent pizza dough. After streaching the dough into my favorite seasoned pizza pan, I put a few tablespoons of garlic infused olive oil around the dough. Followed by some farmer's cheese chunks, capers, fresh dill and dried basil. I topped it all off with some parmesean cheese and a few twists of black pepper. Into a 450 degree oven for about 10 minutes, until the crust was just about done, then removed to add the flaked salmon. I returned the pie to the oven to finish the baking for about 5 minutes more. I served it with some lemon wedges, sour cream and dill dressing and a pungent blue cheese kicker.

Wedges of love, lemon and cheese.

The flavors are strong and smokey with a crunch from the crust and a punch from the garlic oil and salty capers. I paired it with an old vine Zinfandel from Lodi California called Gnarley Head, which runs about $10-$12 a bottle depending on your source. I recommend this wine because it has the backbone to stand up to the strong flavors of this pizza.

Would you try Smoked Salmon on Pizza?

to be placed on top of the pizza after baking rather than have its delicate flavor destroyed in 500 F heat.  The same  reason we put arugula or other greens and herbs on pizza after it is baked.

Fresh un-smoked salmon are a regular pre-baked topping for a seafood pizza though.

The salmon I used was hot smoked, or cooked in moist heat with a touch of smoke.  So basically, I just got it to warm back through in the last 5 minutes of cooking.  If it were cold smoked, there is no way I would cook it.  I love the Arugula Idea.  Have you ever had Kale chips?  I'm thinking to attempt Arugula chips.

This sounds so good. I've made pizza with the hot smoked salmon, and it pairs amazingly well with capers. The fresh lemon is key. We like to hit it with grated zest too. Sooo good.

If you haven't done a clam pizza, I highly recommend it. With a ton of garlic and fresh parsley, and the best provolone you can find.

Intrigued by your choice of wine. I would have been reaching for a dry minerally white. How was the pairing?