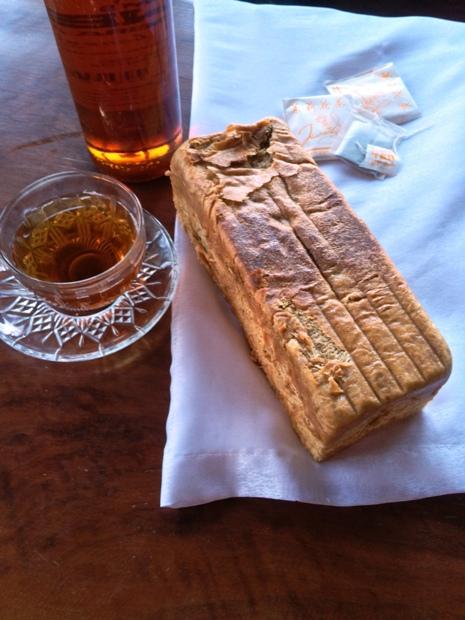 This is my first bake for 2016 and it is my most outrageous bake to date! 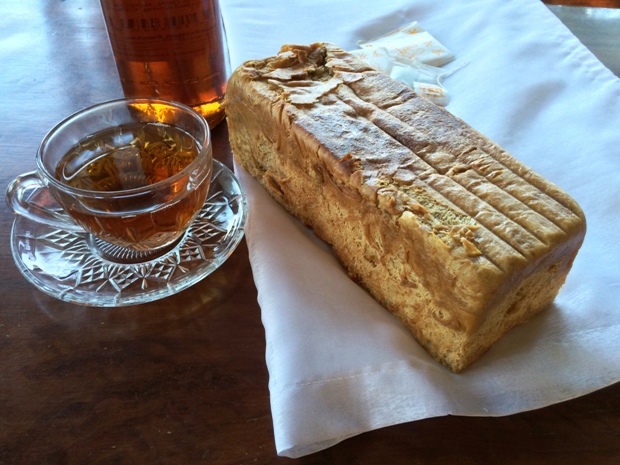 Yaksik (藥食/약식) is a traditional Korean sweet dish made by steaming glutinous rice, honey, nuts and dried fruits. Yak (藥)  in Korean means medicine and Sik (食) means food so yaksik literally means medicinal food. Honey has been regarded for a long time as medicinal and from my research it is the reason why yaksik was called yaksik. Yaksik is usually seasoned with honey, brown sugar, and soy sauce further augmented by cinnamon and sesame oil; those flavors are the main inspiration of this bread. I don't have the "standard" yaksik mix of jujubes, pine nuts and chestnuts but I have golden raisins so that's what I used here as I think any dried fruit will do; the only important thing is there are some. 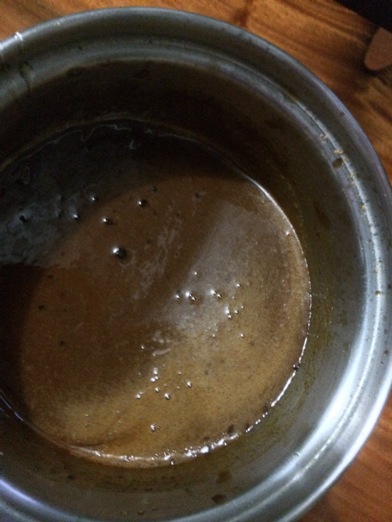 This is the glorious Yaksik seasoning sauce made with dark brown sugar, soy sauce, honey, cinnamon, sesame oil and cinnamon. It's very fragrant and enticing but don't try to taste it in its pure state as it is so intense that it might make you throw up like what almost happened to me! 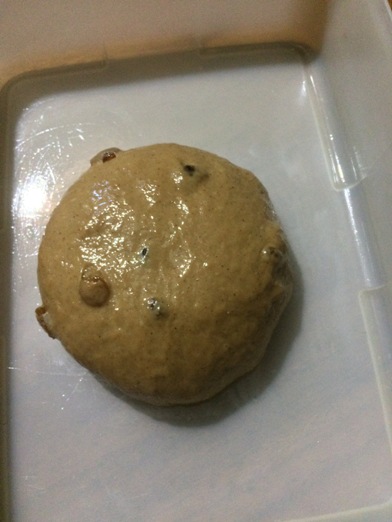 This is the finished dough with the raisins already incorporated. I use strong flour because of all that gluten weakening sugars and used more yeast because I don't have osmotolerant yeast which is preferable for high sugar doughs. This is still the old me, baking without measuring. I planned a bulk rise at room temperature for an hour before it goes to the fridge but when I checked it, it hasn't grown so I let it go for another hour and when I checked again there is hardly any growth! Oh no! Various thoughts ran through my mind; Have I killed the yeast with the cinnamon and soy sauce? Is the amount of yeast I added too little and all of the sugars are slowing to the point that it's dead? I remember that the night is much colder than the nights I made bread before, I asked Siri about the temperature and she said it's 24°C. 24°C is considered (very) cold where I live so maybe it's the reason why the dough is slow to rise so instead of putting it in the fridge I left in outside near my bed for the bulk fermentation. 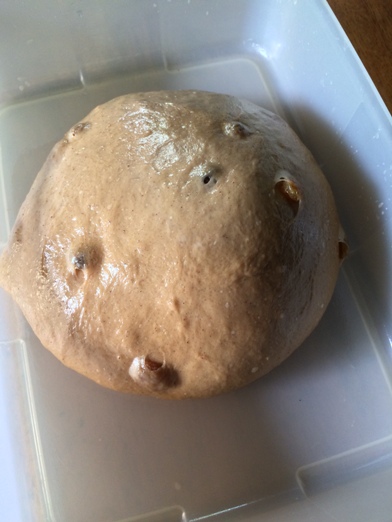 I was greeted by this beauty this (notice the difference in the light?) morning! She's alive! All those sugar, soy sauce and cinnamon did no harm to her! 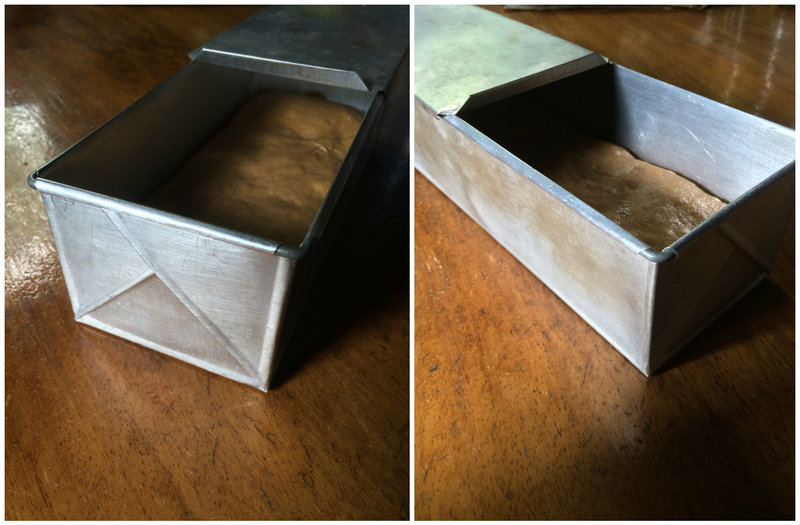 This is my gift to myself for this year's baking, a pullman pan! For us with no ovens this is our best friend! For bread to be cooked evenly without an oven, I found out over the years that conduction is the best heat transfer method for even browning and cooking, convection and radiation are just to uneven and I always end up with an almost burnt bottom and a pale top. With a pullman pan, there is something that will support the structure of loaf  and regulate intense temperatures while cooking and you can turn the bread so all sides get a chance to face the heat source from the bottom. The result is an evenly browned and cooked loaf; still, more work and not as even as an oven does but a million times better that what I achieved before. I baked this in a frying pan over a wood fire because the pullman pan is too large for my clay pot. 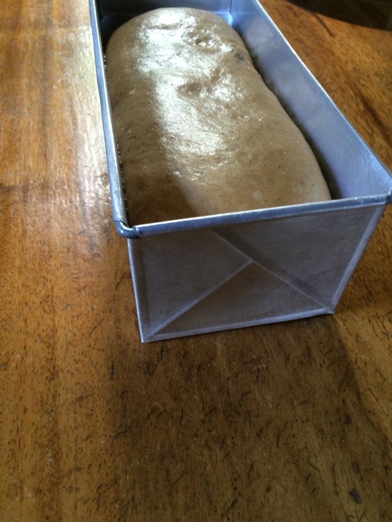 The dough rose nicely in the pan indicating good gluten development, I compensated for the high amount of sugar by a lot of kneading and strong flour. I followed txfarmer's advice of letting the dough proof just 80% of the pullman pan for a perfect height with round corners of the finished loaf. Being high in sugar, the bread stuck on the lid of the pullman pan when it finished cooking despite a good amount of oil so the top crust was ripped but it's still pretty for us. Likewise the bottom crust stuck to the parchment paper and I have no choice but to peel it off. It is enough to be thankful that bread was not burnt since it's very easy to burn it. Those marks at the top are from the cooling rack. 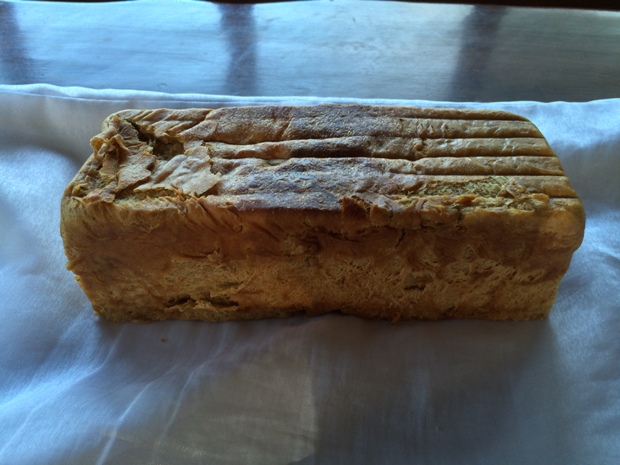 It has a very interesting flavor, very different from the pure seasoning sauce. Coming out from the pan the aroma of peanut butter wafted in the air with hints of chocolate and cinnamon. The bread was not very sweet but has a strong flavor of molasses and a touch of honey. There is a slight saltiness with a savory note for you to know it's something different but not enough to reveal there's soy sauce in it. The juicy raisins complemented the other flavors well especially the cinnamon flavor that comes through last in the flavor profile, not that strong cinnamon flavor that you will think it's "cinnamon raisin bread" but just enough for a sense of familiarity and fragrance in this entirely unconventional treat. Definitely not a flavor for everyday snacking for me but nice to have to shake up the palate once in while! 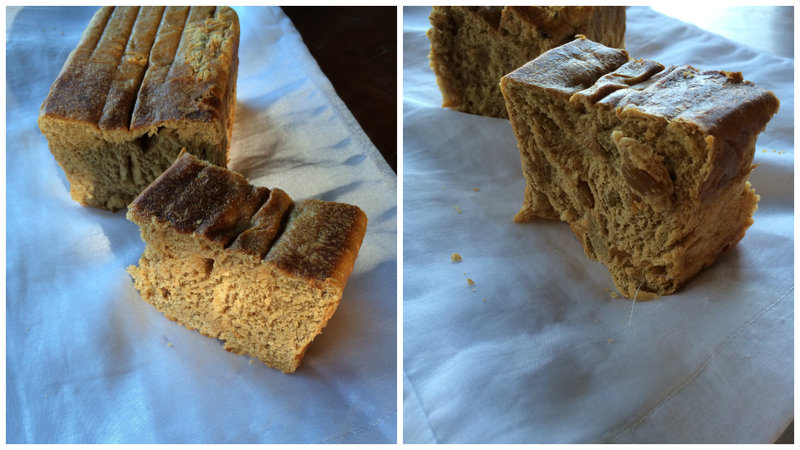 The crust is very thin, soft and delicate. The crumb is very soft that it's very difficult to slice, it's easier to pull a chunk off the loaf or pull shreds to eat. It's like eating an intensely flavored cloud. 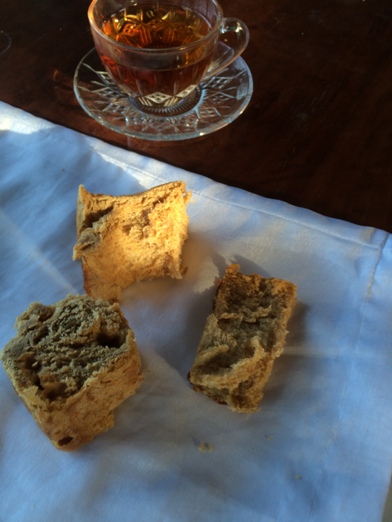 The color is not as intense as a real yaksik because the ratio of the seasoning sauce to the grain is lower but it's still there. For the record, I still haven't made or even tasted an authentic yaksik made with glutinous rice. I think a more robust whole wheat will stand up and complement more all the intense flavors of this bread. I will use more honey and less or even completely leave brown sugar out next time because honey should be the star sweetener as it was the reason why yaksik was called yaksik. Finally I will try to complete the traditional add-ins pine nuts, chestnuts and jujubes next time.

I wish you could try it! It goes very well with tea! Wait! Why is there always tea in the photos? Well, it's a preview for my next post that's still in theory. I hope you enjoyed this post, until next time!

Thank you very much! 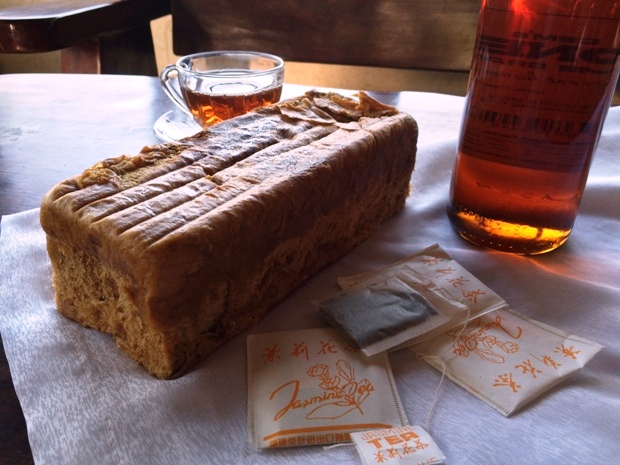 without an oven than many do with one!  The texture of thsi bread as you describe and it being difficult to cut may mean it isn't done to 196 F in the center as a sweet bread might want to be,  Do you have and instant read thermometer.  Without an oven you might get one to help you get the temperature just right when baking over an open fire like you do.  I'm not sure I can imagine what this bread tastes like without a base line but you describe it well.

I think the results you got are pretty amazing.  Well done and

You maybe right that the bread wasn't done yet because it's moister than breads I baked before. Most breads I baked before are done within 40 minutes and I let this bread bake for about 50 minutes, I might try to bake it for an hour next time but I think another reason why I had difficulty in slicing it is because I don't have a serrated knife, I just used a cheap knife that has no problem with crustier heartier loaves.

Instant read thermometer is like the fountain of youth in my area, I can't find one despite trying so hard. I think I can only get them in the capital city, which is a two hour drive excluding the time you get stuck in the heavy traffic jam. It's my first time to use this pan so I might have to play a bit with baking times.

This is one of the most unique breads I ever tasted which can even be an "acquired taste" to some but the whole family loved it.

And results!  Very interesting idea to roll the pan while baking.  Also the combination of sweet, sour salty and roasted!

Some of what you're doing reminds me of the work I did in a plastics lab many years ago.  I would fill a mould with resin and rotate the mould until the plastic had coated the inside of the form and set up solid, then release it from the mould.  Makes me wonder what would happen if you rigged up a rotating spit, or if a pullman was clamped in like a chicken and rotated slowly around and around above the fire (or in my mini oven, like many of the small ovens are designed to do.)

The sticking to sides and top might be prevented with rolling the dough in a layer of flour (or sesame seeds?) first before panning and proofing, just a thought.  Might even want to think about rolling the dough loosely in oiled banana leaf or  pandan leaves to prevent sticking and add another flavour to the bread.

Actually, the idea of turning the bread on all sides came from the spit roasted piglet I posted about a month ago. I want to try to bake bread over an open fire on a spit but I still could not find the right bamboo. When I saw the pullman pan, I thought that I could apply the same principle so I grabbed it immediately!

Thanks for all of your suggestions, you always have lots of ideas! I think rolling it in black sesame seed is the best, it will complement the flavor well because there's some roasted sesame oil in the dough too.

Hello and thank you for this article as I am attempting to prepare a similar meal.  However, I needed to ask if you by chance will share your recipe for the thin pancakes.

They're similar to Peking duck wrappers. I based my wrappers in this recipe. I cook without measurements so I didn't follow her measurements. I just added water until my desired dough consistency was achieved; I also divided them into smaller pieces then cooked them as done in the video.