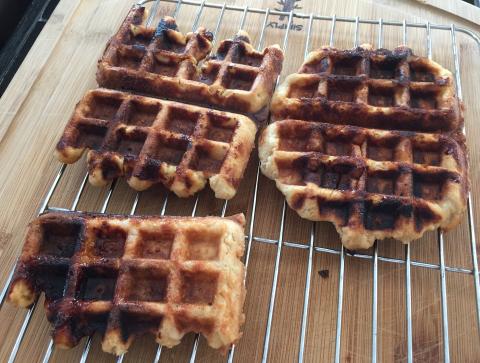 Made some waffles using this recipe.

I deviated from the recipe by using some starter instead of commercial yeast. I made a stiff preferment and after it doubled in bulk I scooped out a generous tablespoon full and went forward with the recipe. The bulk fermentation was about 8 hours in a very warm room, followed by the called-for retardation in the fridge.

I went wrong with the pearl sugar. I was able to knead it into the dough by hand, and I let it rest about 6 hours in the fridge (which was a mistake). When I removed it to divide into 5 pieces, there was a puddle of liquid at the bottom of the bowl - I tasted a bit and it was sweet, apparently the pearl sugar drew some moisture and dissolved. Ugh.

Well, might as well move forward so I divided it and let the smaller pieces rest in my laundry rooom which is quite cold this time of year (poorly designed/insulated 1960s era home).

I fired up my 20-year-old commercial "Belgian waffle iron" (not a sexy Krampouz) this morning, took one of the dough balls (that had risen ever so slightly overnight), pressed in a small spoonful of pearl sugar (to compensate for that which dissolved), and placed the ball in the iron.

The result was quite nice. Coming off the iron the waffle seemed to be limp/floppy but after it cooled for a minute or two the sugary outer crust hardened nicely and the waffle stiffened. The waffle was very tasty and I enjoyed one with a cup of coffee. In the pic the blackened parts weren't burnt, it was the pearl sugar that had caramelized and darkened.

My daughters also had some for breakfast and they both enjoyed them. My wife had a bite and said that she thought they were good (she has some gluten tolerance problems so all she could have was 1 bite).

The next time I make these I will only knead in the pearl sugar when I'm definitely ready to  cook within 1 or 2 hours afterwards.

@bestbake: certainly. I hope you share your results as well!

Glad the waffles turned out to your liking. I actually wrote the recipe you were working from there, so it's interesting to see a sourdough spin on them.

As you discovered, timing for working the sugar in is crucial. If you can do it, right before the final proof, it should work out quite well.

If you give these a go again, perhaps give baker's yeast / ale yeast (or even ale barm) a try. The ascent of waffles from the 15th-19th centuries had a lot to do with them not being sourdough. Sourdough was such a staple of the working class diet, that waffles - with their fine wheat flour and ale yeast - were a major treat.

Mr. Waffles, thanks for the feedback. I will definitely be making them again and will try the commercial yeast for comparison purposes.

So ... I'm sorry in advance if this sounds argumentative (I'm naturally talented at being a jerk). What evidence is there that 15th century waffles tasted "clean" (i.e. not sour)? I ask for a couple of reasons.

1. I've homebrewed on and off for the last 20+ years. The Belgian lambic beers are sour, presumably due to the natural occurrence of lactic acid bacteria in combination with airborne yeast (the story I've heard is that open vats of wert would spontaneously ferment from the airborne bacteria). Wouldn't this barm be similar to sourdough culture?

2. Our modern understanding of brewing has been "tainted" (so to speak) by science. If you take a look at this book for example, you'll see that brewers back in the old days had little repeatability by virtue of the fact they didn't understand their yeast culture(s), sanitation, and recipes. Given that insight, is it possible that early waffles were sour(er)?

Anyhow, thanks for sharing the results of your efforts, the waffles were most excellent and worthwhile.