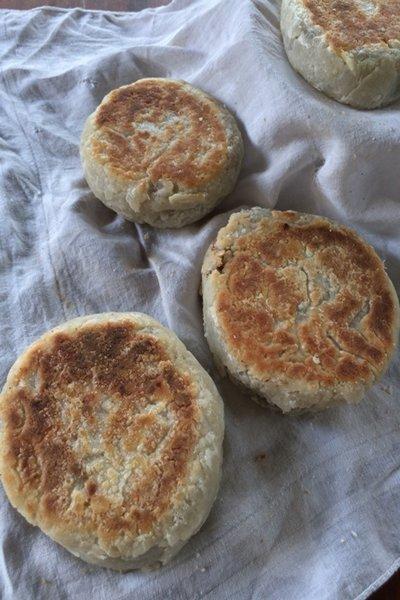 Hopia (好餅- hao bing in Mandarin) in Fookien literally means good cake/pastry, it was introduced by Chinese immigrants mostly from fujian in the country. They are ubiquitous snacks and can be found almost anywhere; in the general merchandise store in cartons at the street corner to most bakeries to high end Chinese delis in gift boxes. The classic versions are mung bean or pork fat filling enclosed in flaky pastry made by alternating layers of water and oil dough. Today different types of crusts are used and more flavors are available like purple yam, jack fruit, cheese, milk candy, custard and a combination of those. Traditionally made with a lot of lard and sugar, there are a lot of "healthier" versions available like lite and sugar free hopia.

Since these are Chinese treats, it's natural to think that the best ones are from the Chinese delis in Chinatown but they are rivaled or even outmatched by a hole in the wall bakery about an hour away from there. Their hopia are small, non-uniform in size and have charred spots on its toasted crust.They are definitely made with lard and baked in a wood fired oven; this is maybe the artisan equivalent to hopia. A stone's throw away is a famous ham shop and as I've read from a blog, who knows if they use the ham drippings there for their delicious hopia?! Freshly baked hopia are stacked on large trays and just packed when you order. Still warm, it is one my indulgences; not too sweet, savory at the same time, silky, little crispy, soft and flaky. 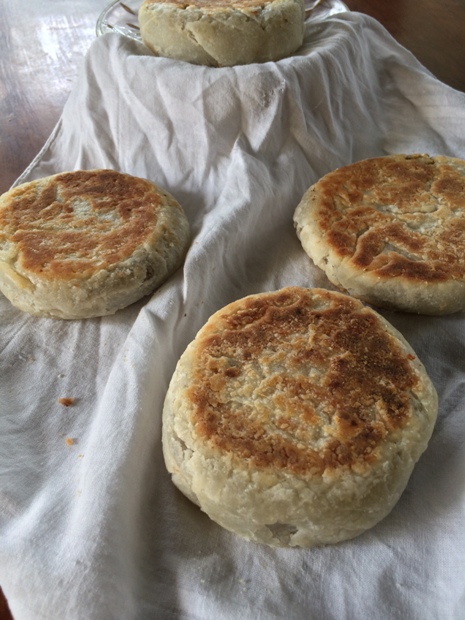 Featured here is the classic hopiang monggo or mung bean hopia. Chinese delis use peeled split mung beans and have the smoothest filling thus commanding a higher price. I have used here whole mung beans because that's what I had on hand and is similar to how I remember these pastries are; though not as smooth, my homemade bean paste is delicious with the right amount of sweetness and I'm sure that it's made with 100% mung beans unlike other bakers that use different sorts of fillers like potato, sweet potato and even green peas!. It is one of dad's favorite snacks so I tried to make my own version with LESS fat than the traditional ones and in larger size, my own hopia is equivalent to two or three normal hopia sold in stores. Though commonly baked in a oven, I've seen some cooked on a flat grill and that's what I did here too. 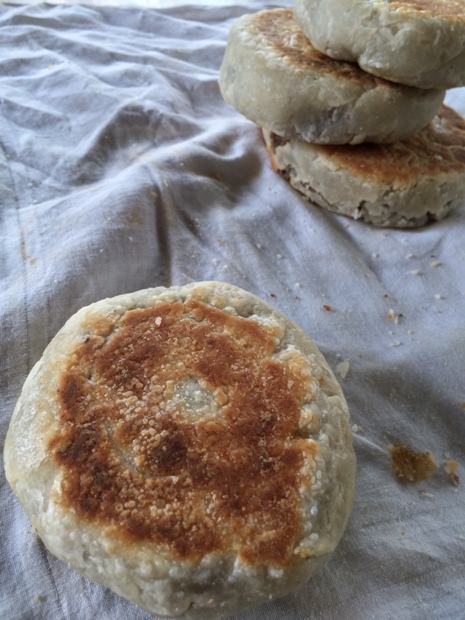 The ideal hopia crust has a rich flavor, tender and flaky; "leaves of crust" with distinct layers should fall when you cut or bite into it. With the major tweak, it looked like I made a delicious but completely different pastry. The crust was crunchy and more crumbly than flaky. Dad was looking for the falling leaves and jokingly said that since it is a new style of hopia we should give it a name and  said "hopiang malutong" (crunchy hopia), he said it was still delicious especially the bean paste and I've mastered the technique he taught me for adding the right amount of sugar for the right sweetness without measuring. 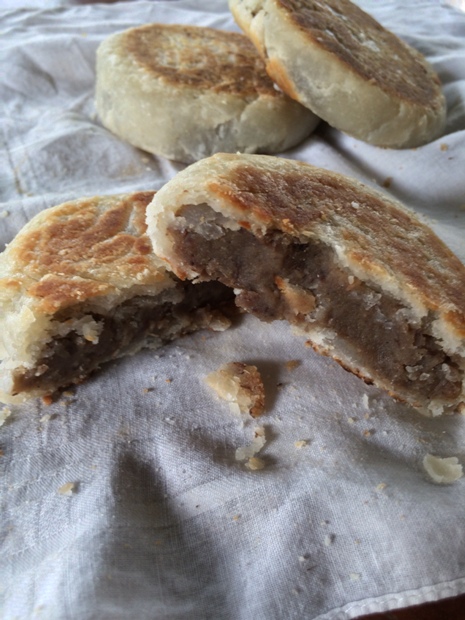 We had one for each of us that day, I cut the last one into quarters and after eating one quarter I kept the remaining three so we can have one for each of us tomorrow. Here is where the magic happened; when we ate it on its second day the crust softened, had a richer taste and became flaky and yes, the falling leaves (no pics since we ate it really fast) were there! Perhaps the little amount of fat distributed itself well all over the cakes during its overnight rest, what difference a day makes! I'd dare say it was a 95% close match to the real deal with just a FRACTION of the fat! 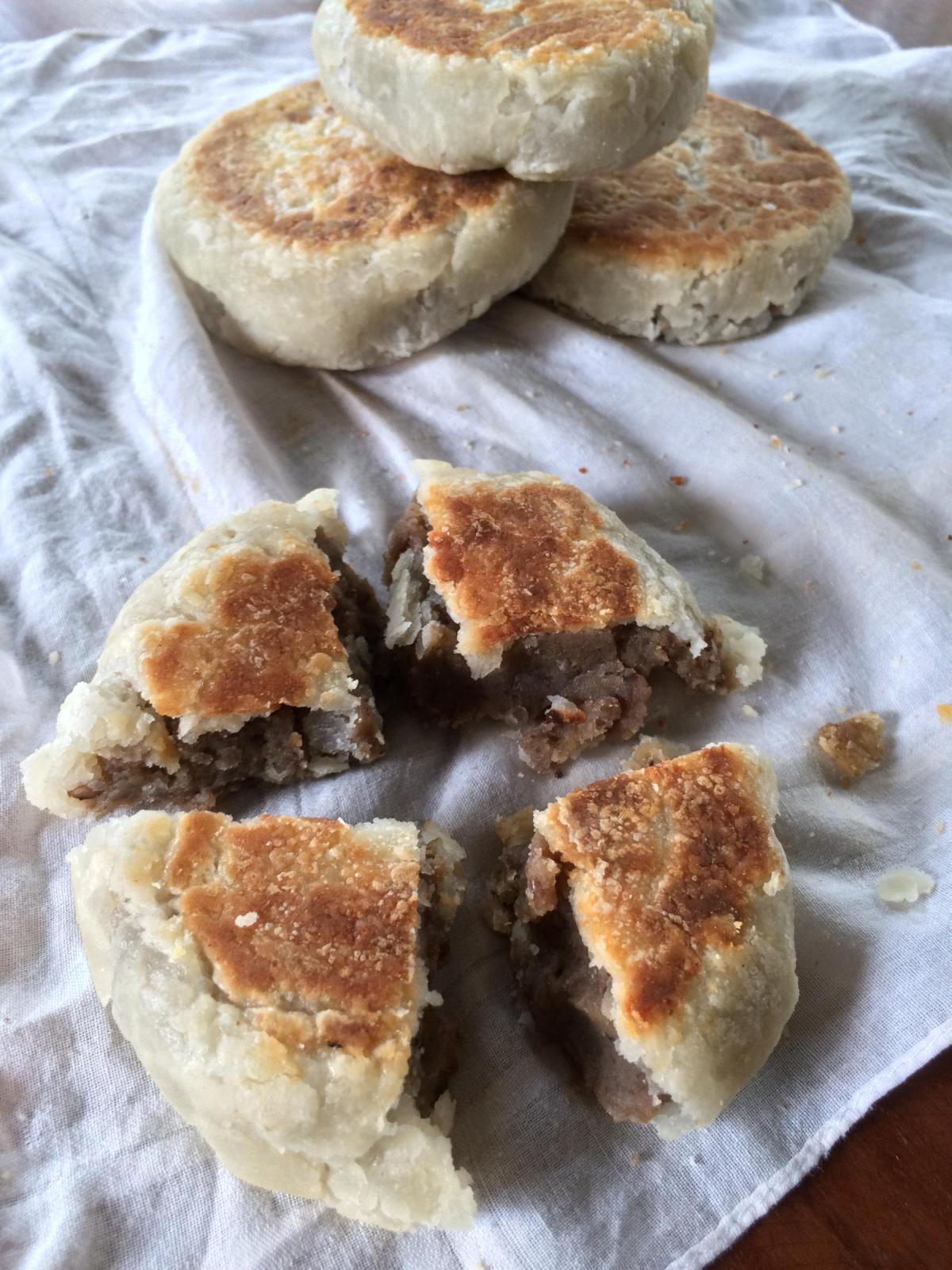 Finally, the flood in the yard has dried up after two weeks and it sure created memories. Various beautiful birds visited the yard to look for food; egrets, zebra doves and a kingfisher that dove into the water five times to catch fish; a truly spectacular sight. From the beautiful there are also not so pretty and dangerous events; because of the water, snakes are finding dry land where they can stay and often found their way into our house. There were eight snake sightings this past fortnight; on the sink, in the bathroom, on the window and fortunately most were non-venomous I THINK excluding that FIVE FOOT ELAPID that almost made its way into the garage! The species is notorious for being on of the most common causes of death among snake bite incidents, we should be more careful when there is water around the house.

Anyhow, this one is truly delicious and I really liked how it turned out.

We belong to a cooking club with folks from our neighbourhood, probably about 60% of whom are Mandarin speaking. One member of the group always brings a plate of those. They always go very quickly. :)

Thank you Sir for your comment and for this wonderful site! I also study Mandarin because I love the language. They are really delicious and have a special place in my heart.

be against the law, or at least sternly frowned upon by the upper crust, which is always more flaky and crisp than the bottom for some reason :-)  Are these a version of large moon cakes made in molds?

Thanks! Yes, these are similar to moon cakes only with a different crust from the Cantonese style but similar to other styles of mooncake like Teochew and Suzhou. Our favorite hopia bakery now carries a variant with salted egg yolk and tastes very similar to mooncakes.

These look great.  I will be in China for work the end of this month and I'm sure to be eating some with dinner.  I love the pork filled ones the best.

Thanks! I'll post my pork version as soon as I make it.

The hopia looks very delicious. Did you use plain flour or a special flour for the pastry crust?Never tried baking hopia, but if it looks this yummy would sure love to try. I'm trying to perfect my croissants, and I am on my third attempt. Maybe I should take a break, save on butter and do hopia:) Will you share us your recipe?

Here is where I based mine with the following changes:

*The recipe is in the description box and the video is very helpful if you want to make traditional ones. If you want to be uberly traditional, use lard for all of the fat.

1) I halved the recipe and made only four large hopia.

2) I totally ditched the oil dough.

4) They are then grilled on a preheated pan until brown on both sides.