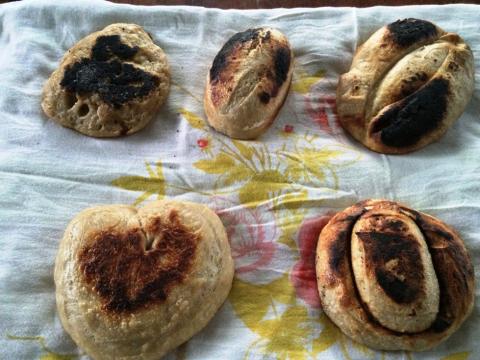 I've been thinking of different methods of baking crusty lean loaves in my clay pot (it's my only baking gear, no oven or fancy grills) lately. One that should be easy but gives me results as close as an oven can get, that means a brown crackly crust, scores that bloom and an open crumb. The heat of the pot is very uneven, the bottom is extremely hot while the top is too cool so the only way to get an even bake is to let the top and bottom of the bread face the extremely hot bottom of the pot. My "pot sticker" method gave me good results but the bread lacked volume, so I tried another 5 different cooking methods so I can test which one will give me the best results. I made a basic dough since the method is the focus here rather than taste. As for the taste; they are sweet with a complex wheaty flavor, slight slight tangy note with the right amount of salt for flavor and very fragrant with some just having a moister crumb than others. Even though they are have burnt spots, they still beat many store bought breads here by a mile. All loaves are made the same way except for the cooking method so there is only one variable to consider for evaluation of results. Some are "ugly" and I hesitate to post them but I decided to post them anyway so I'll learn from them when I do modifications in the future.

The dough is made with bread flour, water, salt and instant yeast. I planned to do a 70% hydration dough but it felt wetter than that maybe because I added more water since I didn't use a scale since I don't have one. The flour was autolysed for 12 hours in the fridge; salt and yeast were added and the dough was fermented at room temperature for 2 hours with stretch and folds every 30 minutes; to the fridge it went for a retardation of another 12 hours.

The dough was then divided into 5 equal pieces straight from the fridge, pre-shaped into a boule with a refrigerated bench rest for 25 minutes then shaped then refrigerated again. I took out one from the fridge every 30 minutes since that is the approximate cooking time for a loaf; each loaf was proofed for 1 hour and 20 minutes approximately. They are baked with steam for the first 10-15 minutes.

*This is just a sneak peek  of the 5 loaves. I have summarized each method below in detail along with a crumb shot for each. In general they all have a thin crust; some just have a crisper bottom and/or top crust. 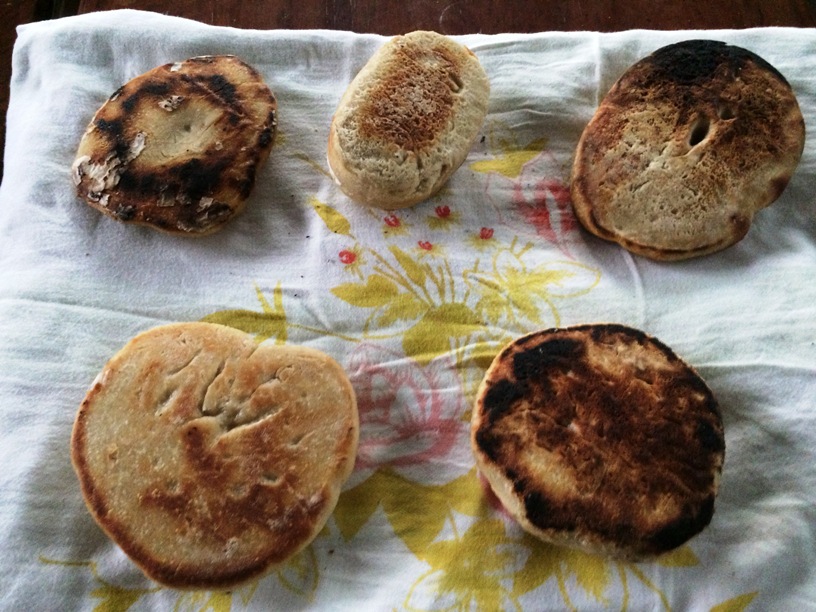 *I can't think of better names for my methods so these are just what came to my mind first (might be funny :P)

THEORY- My idea/reason why I employed the method

PROCEDURE- What I actually did for that particular method

RESULTS- The actual observations/results when I evaluated the breads

POSSIBLE CAUSES- The reasons I thought of behind the results

Theory: The loaf will not be scored so there are no scores to squish and shape to compromise (ex: boules with a flat top where it should be rounded) when the bread is flipped since the top and bottom of the bread are relatively "flat".

Procedure: Shape into a tight boule. Proof seam-side down on a floured cloth. Invert on an oiled parchment and baked on a preheated inverted cake pan for 15 minutes. Release the steam and flip the bread. Continue baking for 15 more minutes until brown.

Results: It came out really FLAT! The center of the "top" was burnt when it was inverted. Although FLAT, crumb is open, moist and chewy.

Possible causes: I was not careful when i flipped the bread so it deflated. I didn't seal the seams tight enough so there is a lack of support. It might be overproofed. 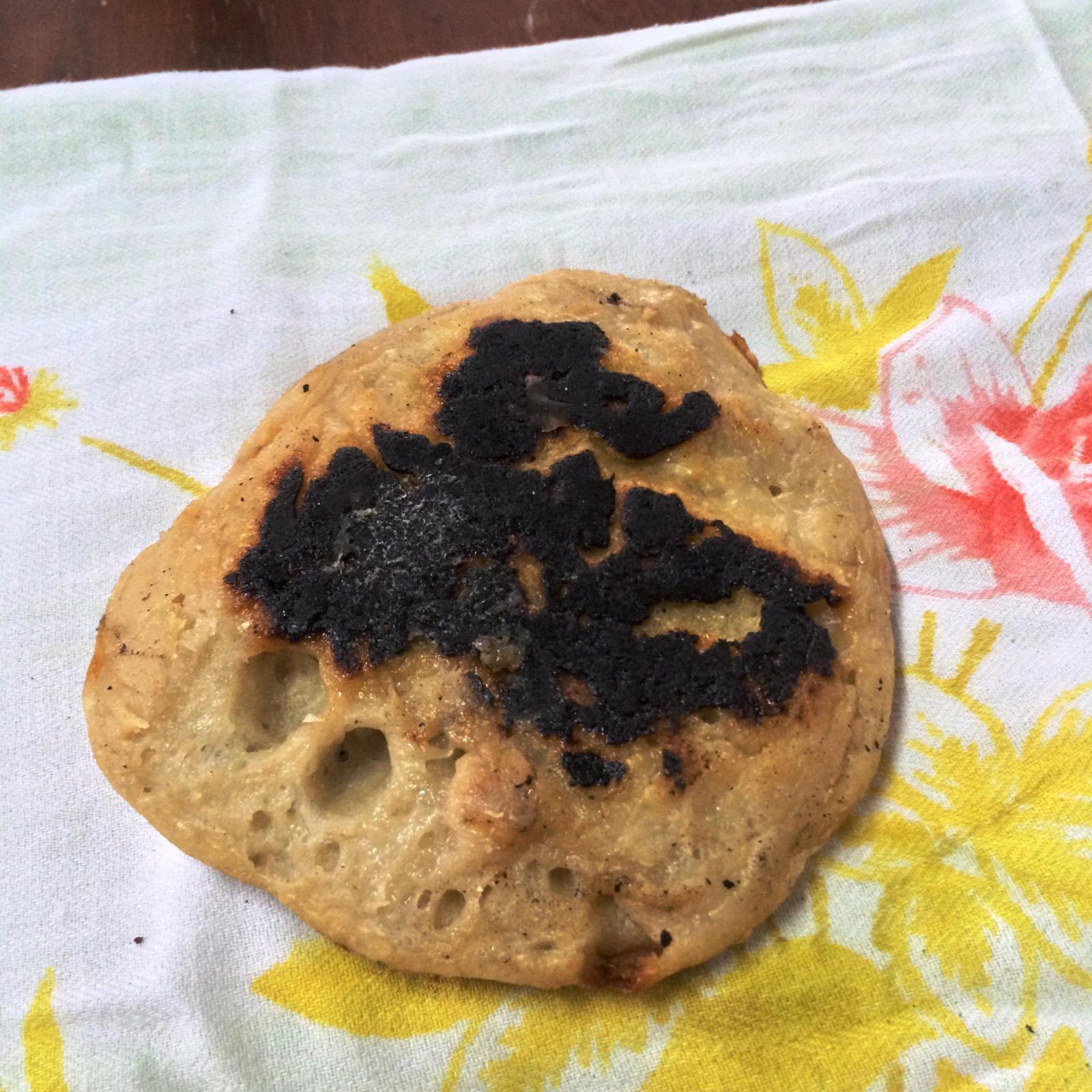 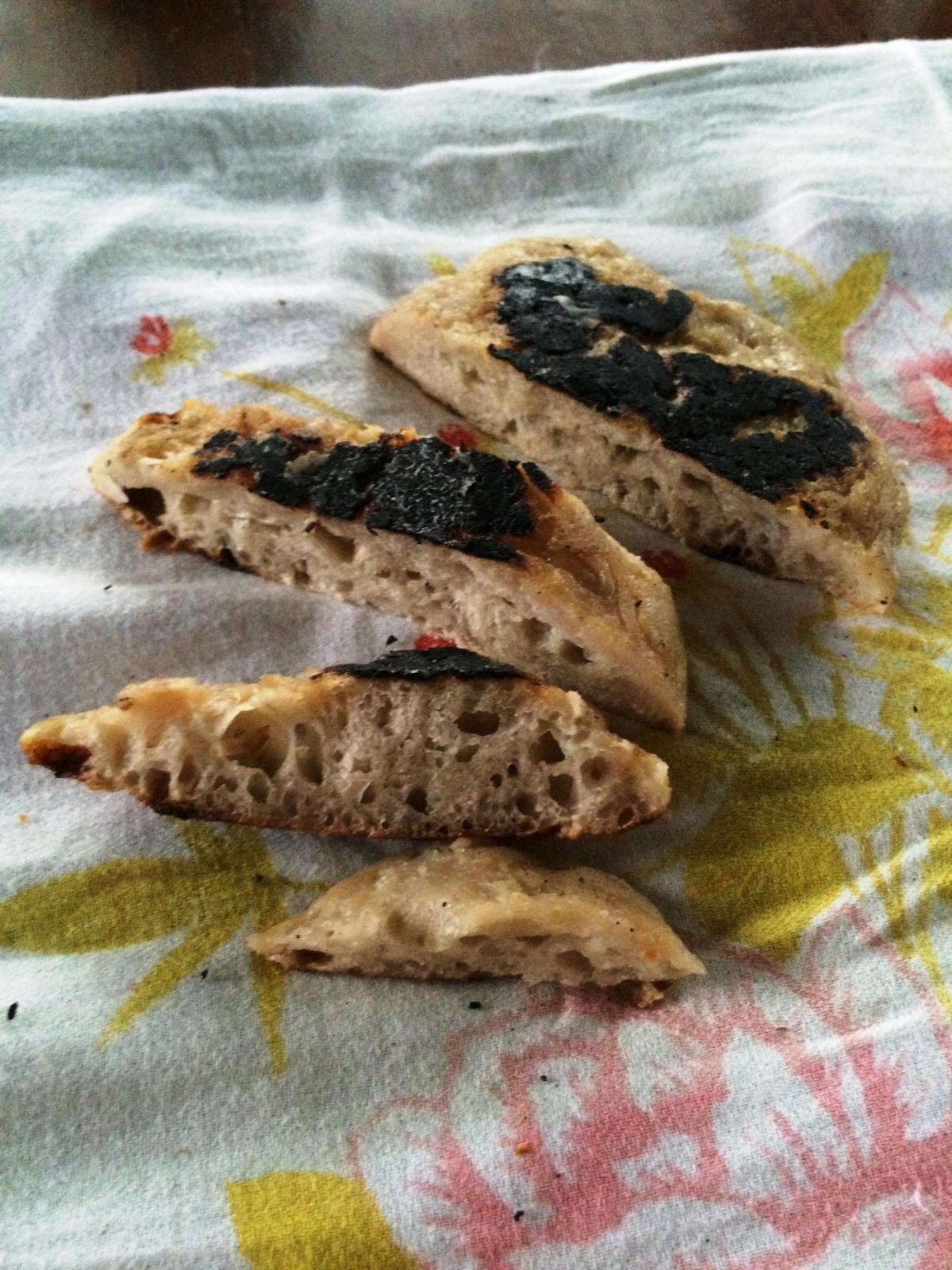 Theory: By tilting the bread on its side where the top is perpendicular to the bottom of the pot the top and sides are exposed to the radiant heat and they will be brown and crisp.

Procedure: Shape into a batard. Proof in a llanera (oval flan mold), oiled and lined with parchment. Score 2 overlapping cuts before baking for 15 minutes then release the steam. Turn the bread on its "side" and bake 7-8 minutes per side.

Results: Oven spring was good. The top and sides are brown and crisp with some blistering though some areas are burnt/pale. Crumb is pretty tight but moist and chewy.

Possible causes: The mold supported the structure of the bread The bread was not rotated evenly. Too much handling/harsh shaping or a tad underproofed. 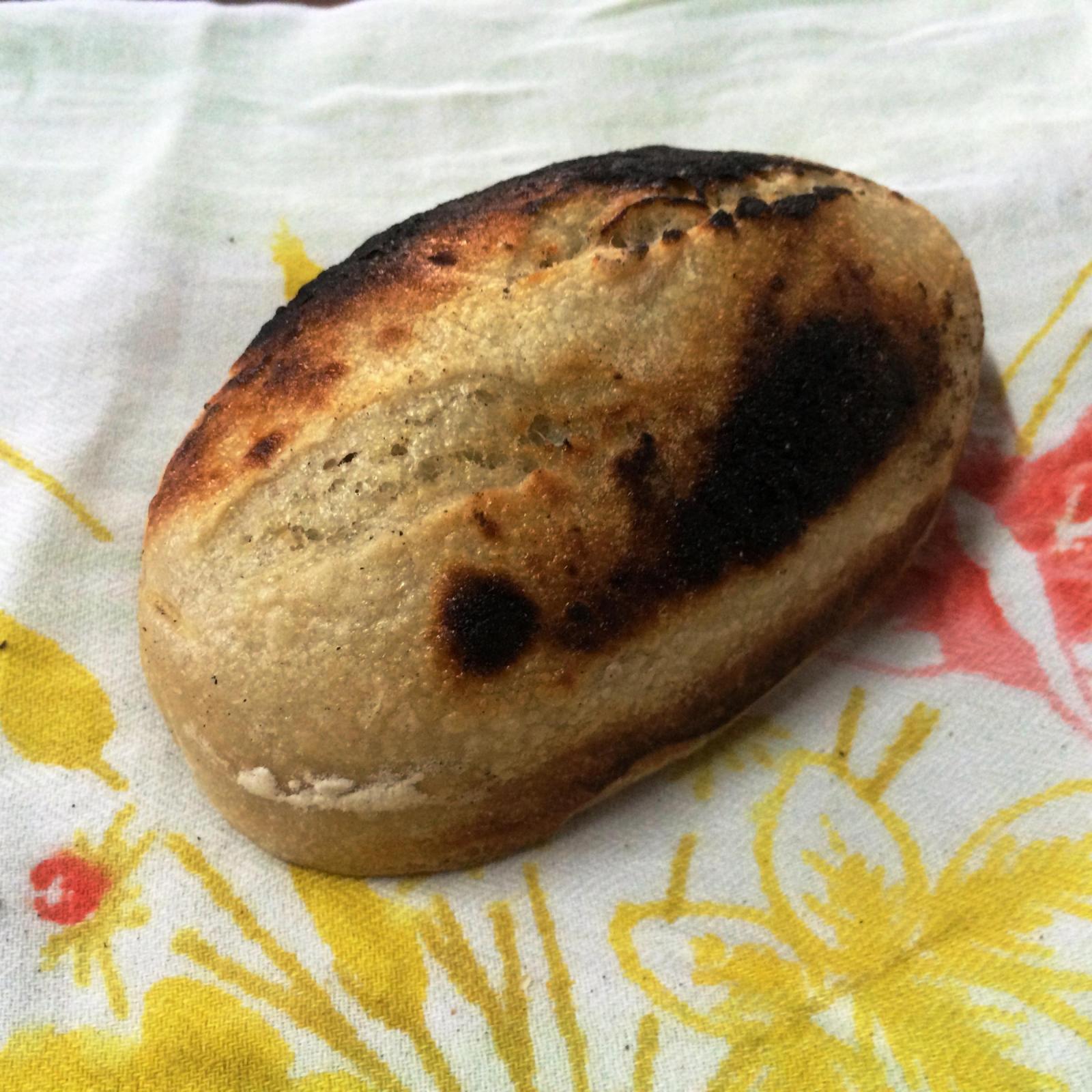 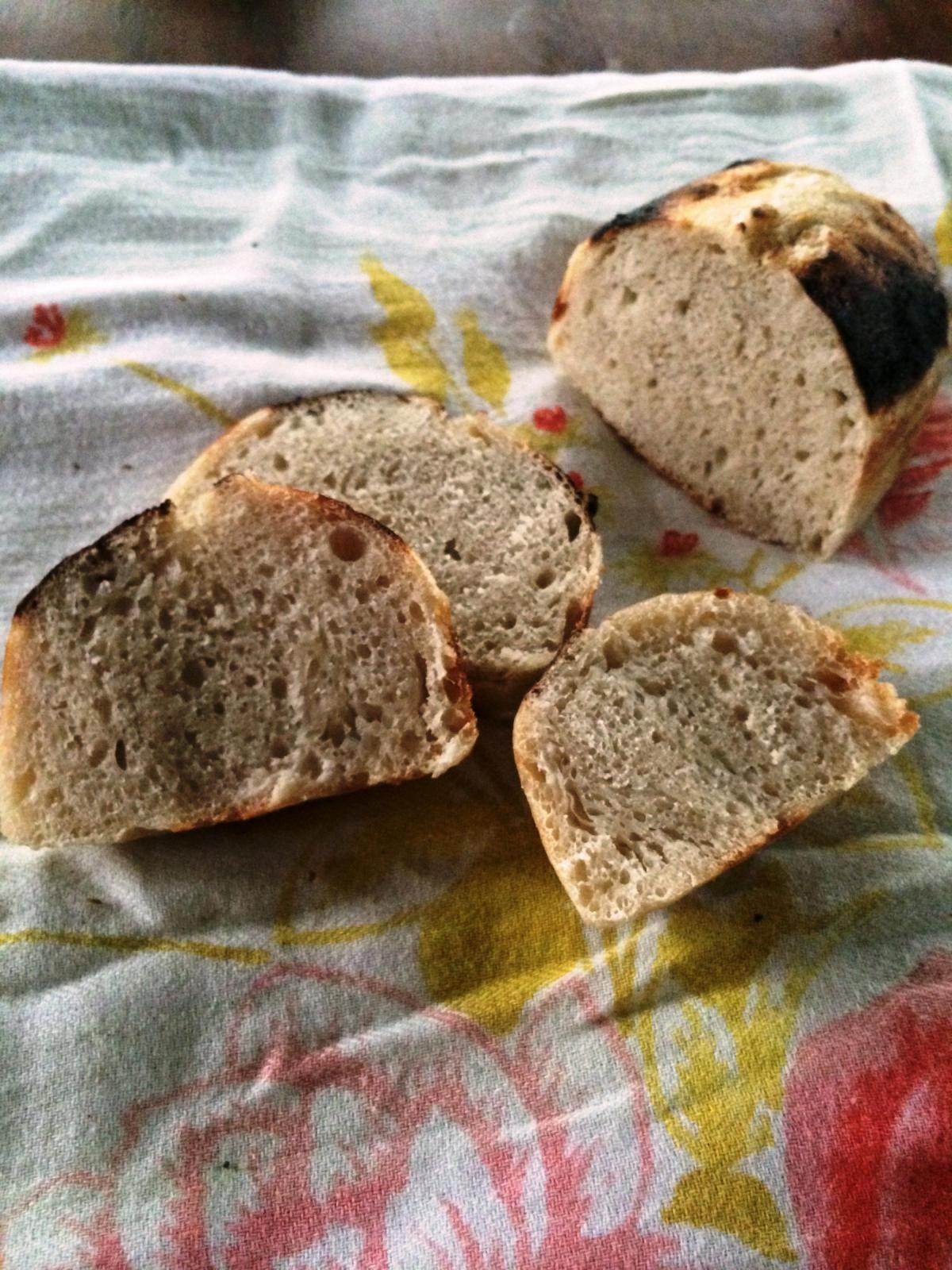 Theory: By forming a fissure at the center of the loaf there is something where you can anchor the loaf on the side/edge of a baking pan to let the top and sides face the radiant heat once the structure is set and the bottom has browned for a brown and crisp top crust.

Procedure: Shape into a batard. Proof in a llanera, oiled and lined with parchment. Make a fissure in the center of the loaf just before baking and bake for 15 minutes. Release the steam. Invert the loaf on the edge of the llanera (ideally the fissure should be used) so one side is exposed directly to the radiant heat while the other side is shielded by the llanera, bake for 15-18 minutes switching sides halfway.

Results: The fissure was almost negligible so the top was anchored to the baking pan by "wherever it will stick" part of the bread forming those two arcs on top. There are some blistering but with burnt and pale spots on the top crust. It is a bit flat but crumb is pretty open, moist and chewy.

Possible causes. The fissure was not formed at the right  time so it rose to almost the same height as the rest of the loaf. The loaf was not rotated evenly when the top directly faced the radiant heat. The bread might be a tad overproofed. 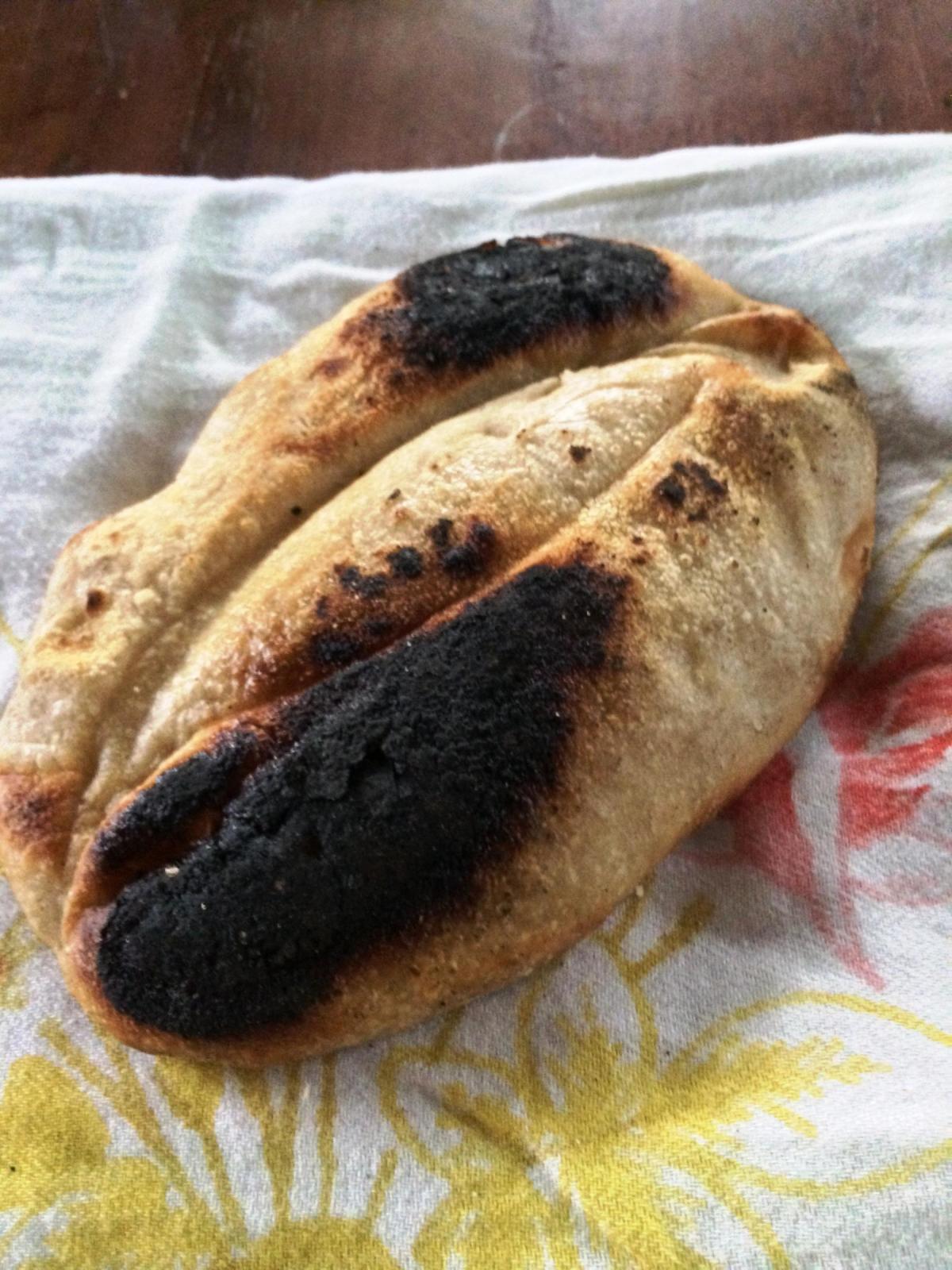 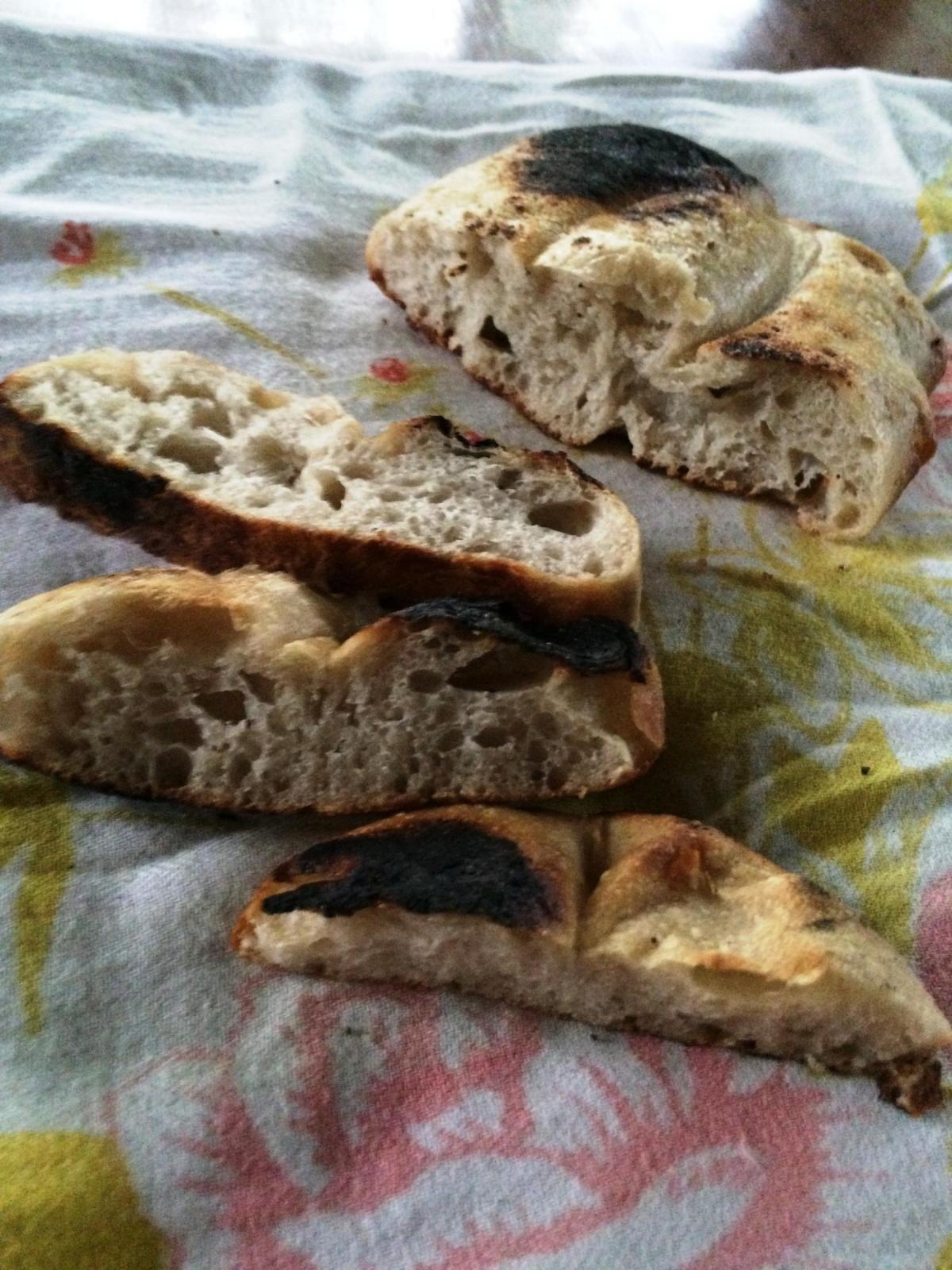 *Inspired by the German Pretzel

Theory: By creating a loaf that is taller than it is wide like a heart shape which is very close to a German pretzel, scoring will tend to go at the "side" rather than at the top eliminating the risk of squished "top score marks" when the loaf is flipped at the same time encouraging expansion of the loaf. The idea is like method no. 2 but with the bread turned on its side already at the beginning of the bake.

Procedure: Shape into a pointy batard. Coil the ends around to form a heart and proof in a floured cloth. Place in an oiled and lined baking pan. Score the side with the blade pointing downwards (this is to encourage the formation of an ear which did not happened here!) and bake for 15 minutes. Release the steam and invert the bread on the baking pan and bake for another 15-20 minutes allowing conduction to brown the top.

Results: The loaf was roughly heart shaped and a bit flat. The score didn't open fully. Only the center of the top browned and crisped while the surrounding areas are pale and soft though there is some blistering. Crumb was pretty open,moist and chewy.

Possible causes: The dough might lacked support because I struggled with the shaping and it was proofed without something to conform its shape. The pot didn't have the high enough temperature because I used less firewood for that roaring fire required or because the fire was not maintained well enough for I am busy doing other things. The baking pan insulated the other areas of the top crust from the fierce radiant heat and only the center was browned by conduction. 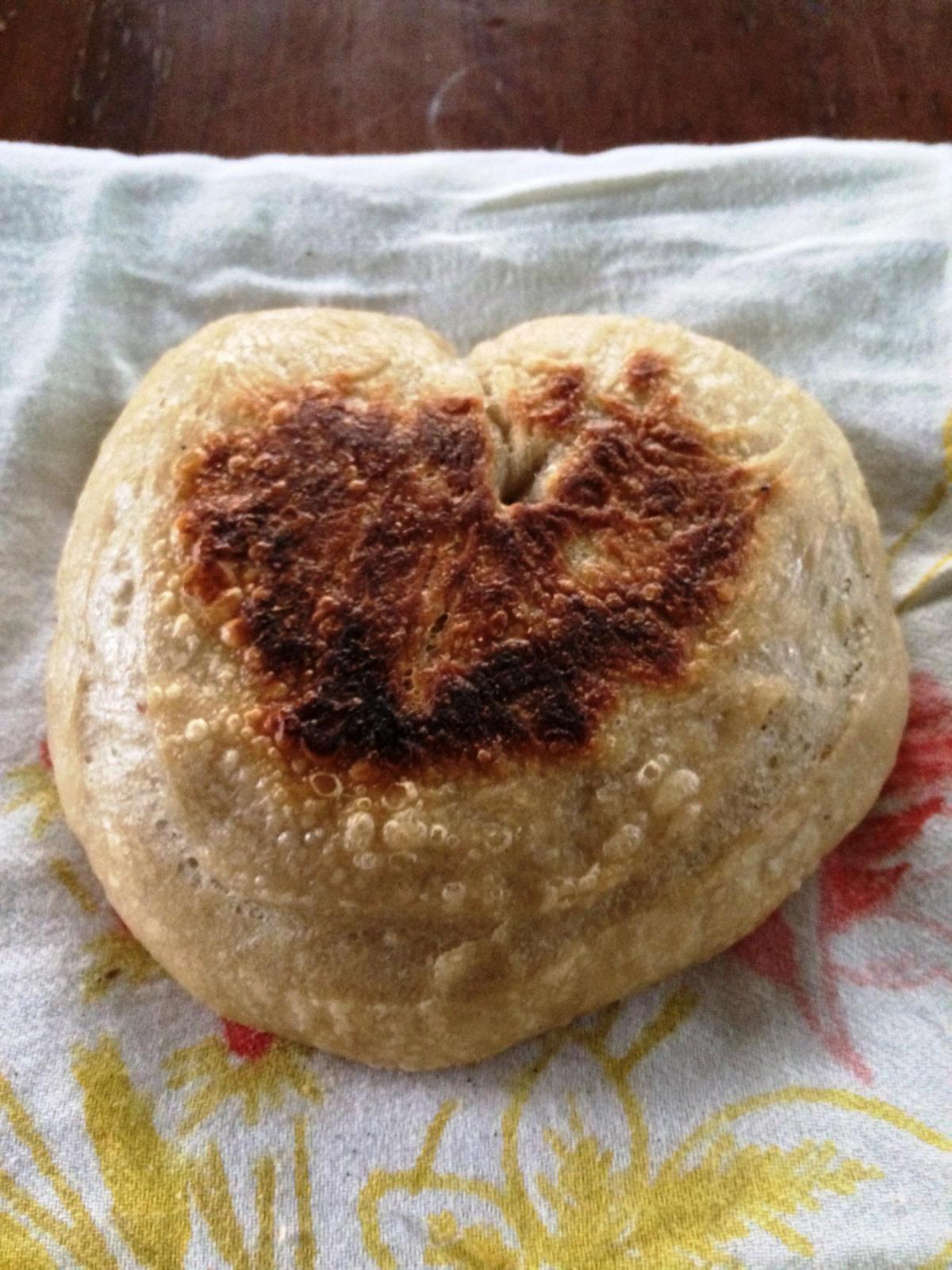 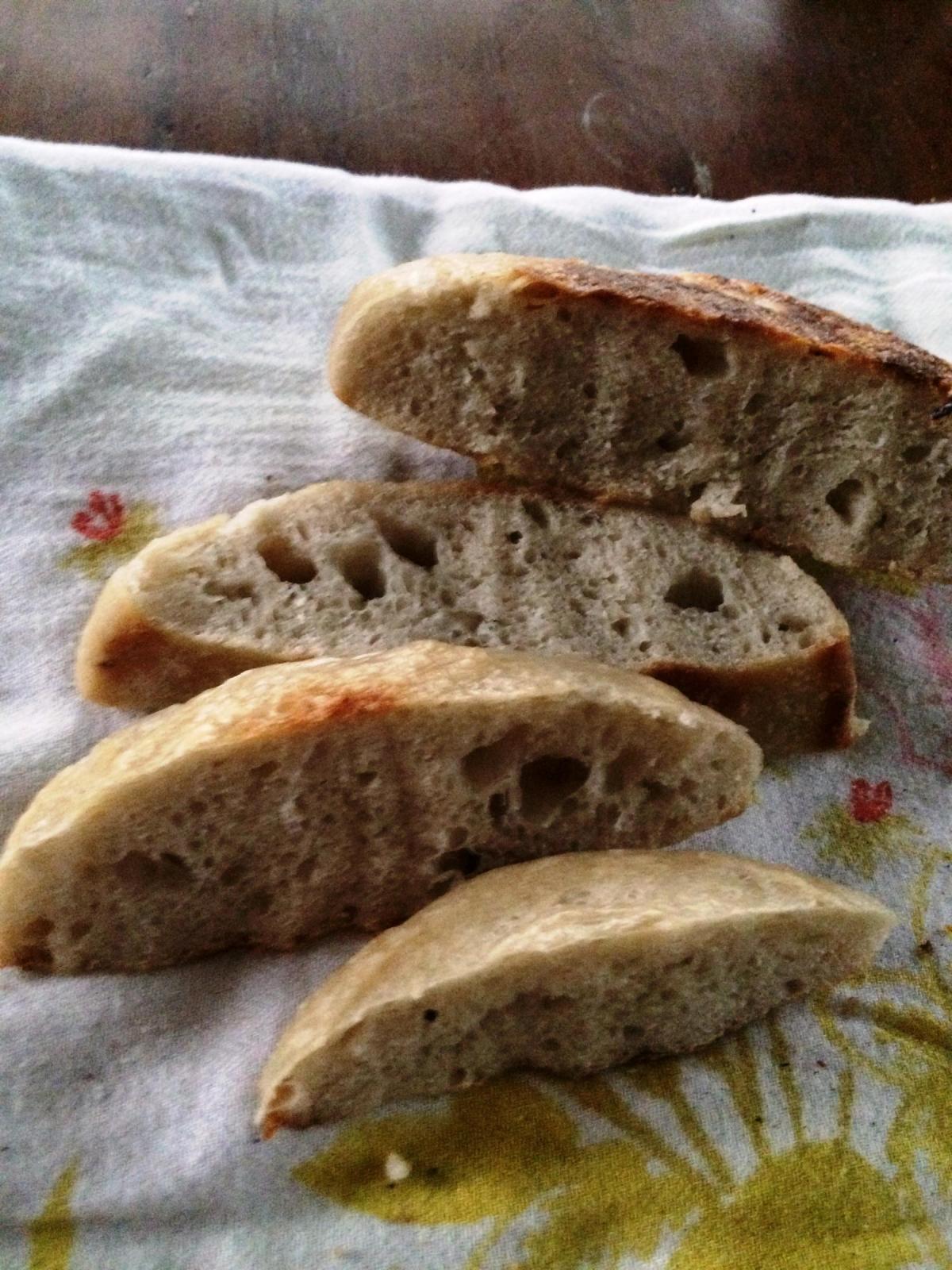 Theory: By scoring around the center, a good spring on the loaf (especially for a wet dough which should be baked at high temperatures) will be encouraged while at the same time creating a small portion of the crust (rather than the crumb) as the contact point when the dough is inverted on a surface only as large as the contact point exposing the top crust directly to the radiant heat avoiding a "crispy crumb" while maintaining a crispy crust.

Procedure: Shaped into a tight boule. Proof seam-side down in a covered container. Transfer to an oiled and lined baking pan and score in a square pattern. Bake for 15 minutes then release the steam. Flip the bread on a smaller baking pan and bake for another 10-15 minutes until brown and crisp.

Results: Top crust is browned well and extremely crisp with good blistering and less burnt and pale spots but the crumb showing through the score marks became indistinguishable from the rest of the crust and became crisp too! The "contact point" is pale at first so it was browned by conduction at directly at the "floor" of the pot after the rest of the crust was browned. Crumb is open, moist and chewy; more open than that of the pot sticker bread.

Possible causes: It is the reverse of method no. 4 where the "center" was the one insulated by the pan so the surrounding areas are exposed to hotter temperatures though farther than the heat source. The higher temperature at the pot gave the loaf a better spring than the steaming temperatures of my previous bake. 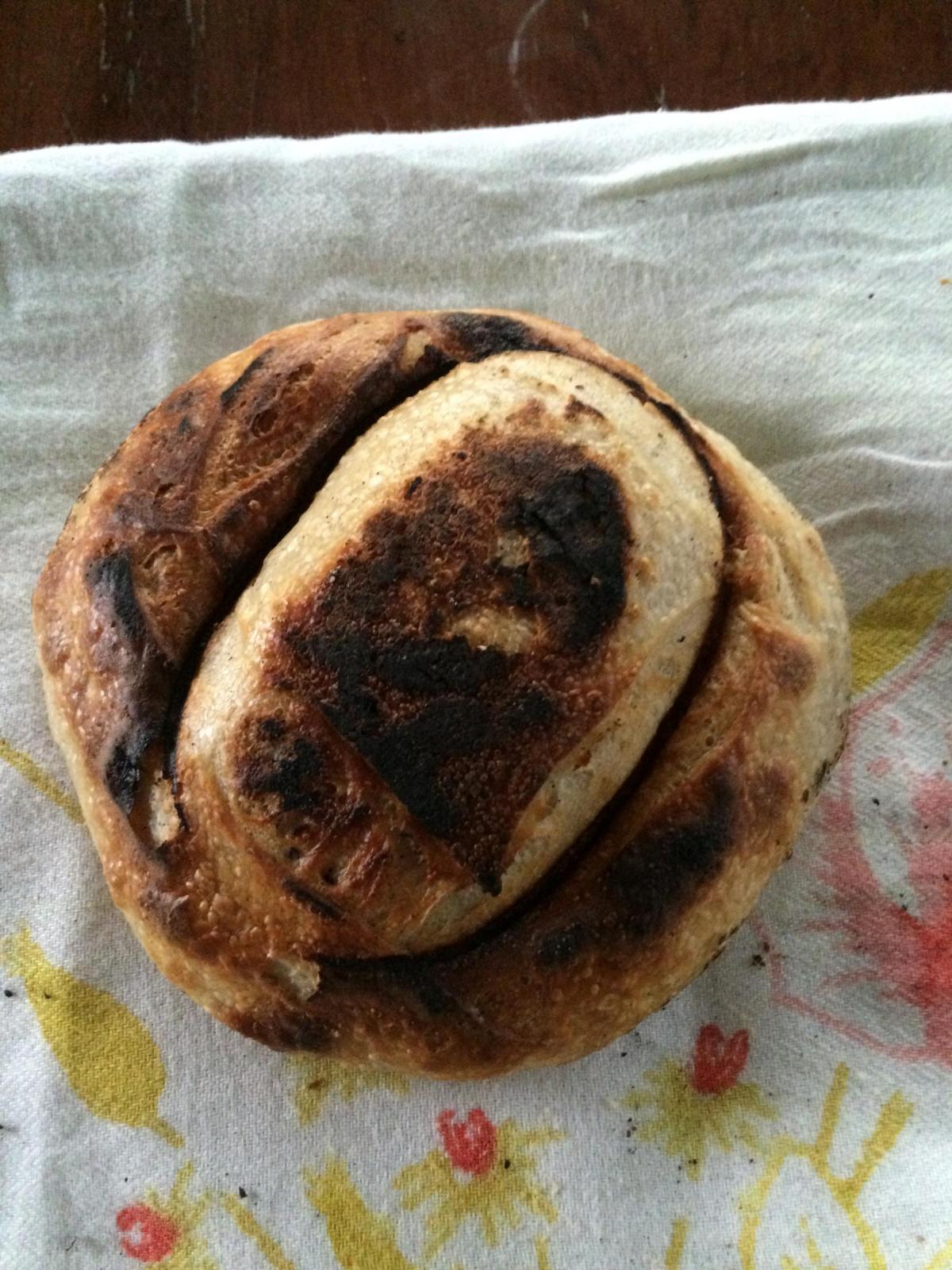 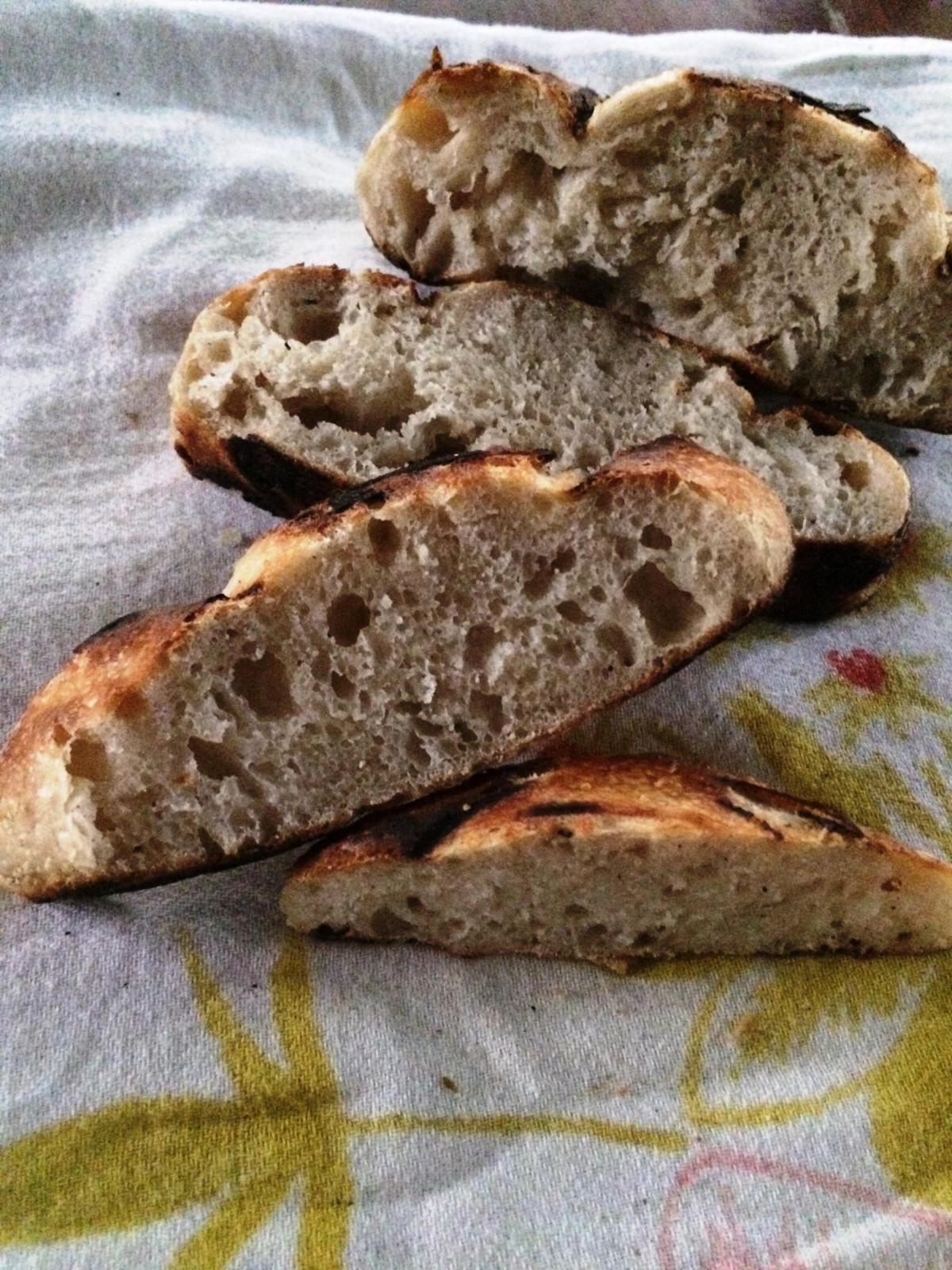 *For structure, I think the best is method no. 2 as you can see in the photos.

*For crust, color, crumb and overall appearance, method no. 5 clearly wins for me.

*I will combine those two in the future with further modifications for a good lean loaf.


Thank you for your patience for reading through this LONG post! Please let me know what you think and pick a favorite. Your comments, questions and suggestions are very helpful and encouraging and will allow me to learn more.

Your experimentation is very interesting. Can you also upload pictures of your pot, fire and how you have it set up to cook? Then we could have a better idea of how this is being done. What comes to mind that might be helpful are those who have been baking in their grill, or maybe even closer, baking in a cast iron dutch oven over coals.

I wish I have taken photos of the various methods but I'm too afraid that the intense heat might damage my phone.

Your solutions are always ingenious - makes those of us WITH ovens feel like slackers! Incredible bread and no doubt delicious! Thanks for sharing,