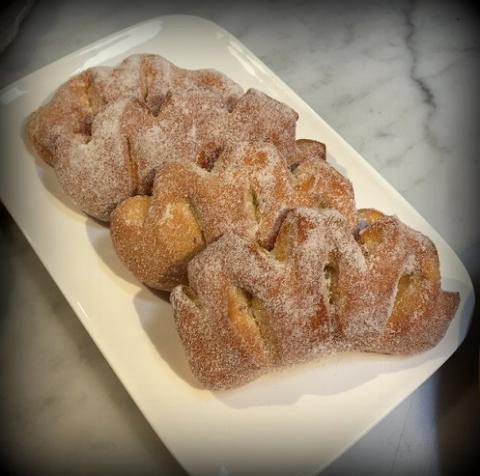 Work has been intense and crazy. So I was thrilled when the executives decided at the last minute to build in a little break in the project timeline. As luck would have it, the break was the same week as the Viennoiserie 2 class at the San Francisco Baking Institute (SFBI). Viennoiserie 1 is offered a few times a year, but level 2 is offered only once a year. I wasn't able to take level 2 last year since it was fully enrolled when I tried to sign up, so I was happy to attend this year. A sane person would've gone to Bora Bora or  Hawaii, but I chose to spend my vacation in a week long (40 hour) pastry class.

Here are some of pastries we made in class. These were just the tip of iceberg.  We made a whole lotta Viennoiserie during the week.  The lead photo (above) is gibassier which is an olive oil brioche with candied orange peel and anise seeds. 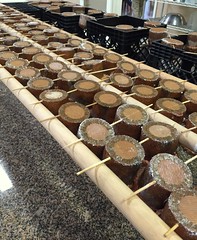 A Single Day's Take Home (Everyday was like this!) 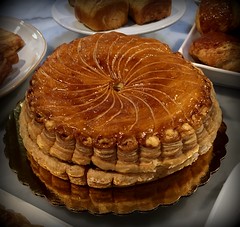 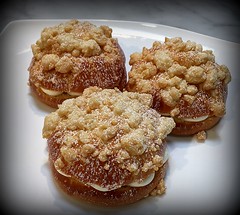 Since the class was an advanced Viennoiserie class, almost everyone in the class was a professional baker. There were a few semi-professionals who sold their baked goods on the side while maintaining a full time day job, but they all hoped to open a bakery some day. I was the only non-professional in the class.When classmates asked if I planned to have a bakery or baking business some day, my answer was "No, I don't. I just bake for fun".

If they had asked me that question a year ago, my answer would have been "Yes, some day". It's a question that I have struggled with for many years. In the last year, I've done a lot of baking, as well as as lot of soul searching. Like many of the TFLers, I bake because I am passionate it about. I freely admit that it would be nice to turn my passion into a career, but I know that I will not be. My decision makes me happy. I don't have to wonder about "some day" anymore.

Pastry heaven. They all look amazing.

And you get to take boxes home.

Thanks Abe. It was quite a lot of pastry. Luckliy I had plenty of people willing to take them off my hands.

How spectacular was this experience?!! You lucky girl! Everything looks wonderful and it must have been an amazing week.

And good on you for you decision. One doesn't need to be a pro to act like one. This way, you can do it on your schedule and to your preference and still win the praises of family and friends. These are beautiful, Mary. You did well and I hope this hectic week provided the change of pace you needed.

Hi Cathy, It was truly a wonderful week.  The hands on experience and overall education at the SFBI have been amazing. And as counterintuitive as this might sound, the classes have really helped me form my decision not to bake as a career even though I could keep up with all the pros in class.

I'm going to die now.  Now worries - my life is complete and fulfilled though your pastries and other sweet goods.

I didn't think it was possible for me to say no more butter but it happened!  I had to detox for a couple days after the week was over.  :)

Mary:  That must have been so fun.  I will have to try that some time when I am in SF!  Thanks so much for sharing. I wish I could have one of those pastries right now.  Great photos, too.  Best,  Phyllis

Hi Phyllis, The SFBI is a great institution.  I highly recommend the classes. I always learn so much and gain a few pounds during the week too!