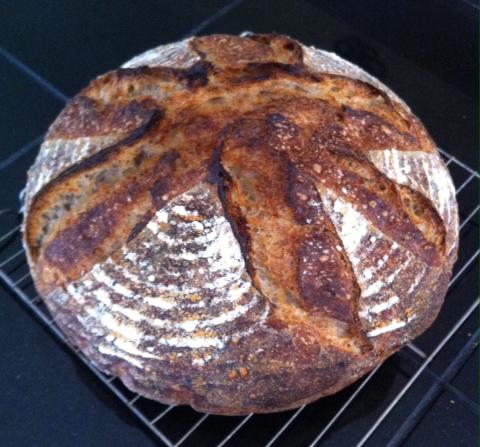 I cooked up some of the Bob's Red Mill 10 Grain Wholegrain Cereal and used it in the preferment instead of the main dough.

Life interfered a bit and the preferment sat for about 12 hours longer than I planned - everything looked fine until I went to use it and there was a thick layer of clear fluid on the surface of the preferment. I decided not to worry about it and simply added it to the main dough.

The amount of "extra moisture" carried by the preferment was a bit much. I estimate the hydration of this dough to have been just under 88% ... I was shooting for 82% but I clearly made an error with the preferment. The dough reminded me of Jennifer Menke's "That's a Lot of Ciabatta" recipe ... very wet, a bit challenging to handle, etc. I mixed the flour and water and let the mass autolyse for 60 minutes. Kneading the dough with my Kitchen Aid also reminded me of Jennifer's recipe, I had to run it at very high speed for something like 15 minutes before the gluten developed enough for the dough to unstick from the sides and bottom of the mixing bowl.

I put my DO in the oven and preheated it to 550dF. I put the dough on a piece of parchment, scored it, and loaded it into the DO. Into the oven for 20 minutes, after 10 minutes of baking I reduced the oven temperature to 525dF. I then removed the bread from the DO, reduced the oven temp to 475dF, and baked for about 18 more minutes (I had planned for 20). Internal temp at this point was 210dF and so I turned the oven off and let the bread sit for another 20 minutes.

I had a slice this morning - very nice aroma and flavor. 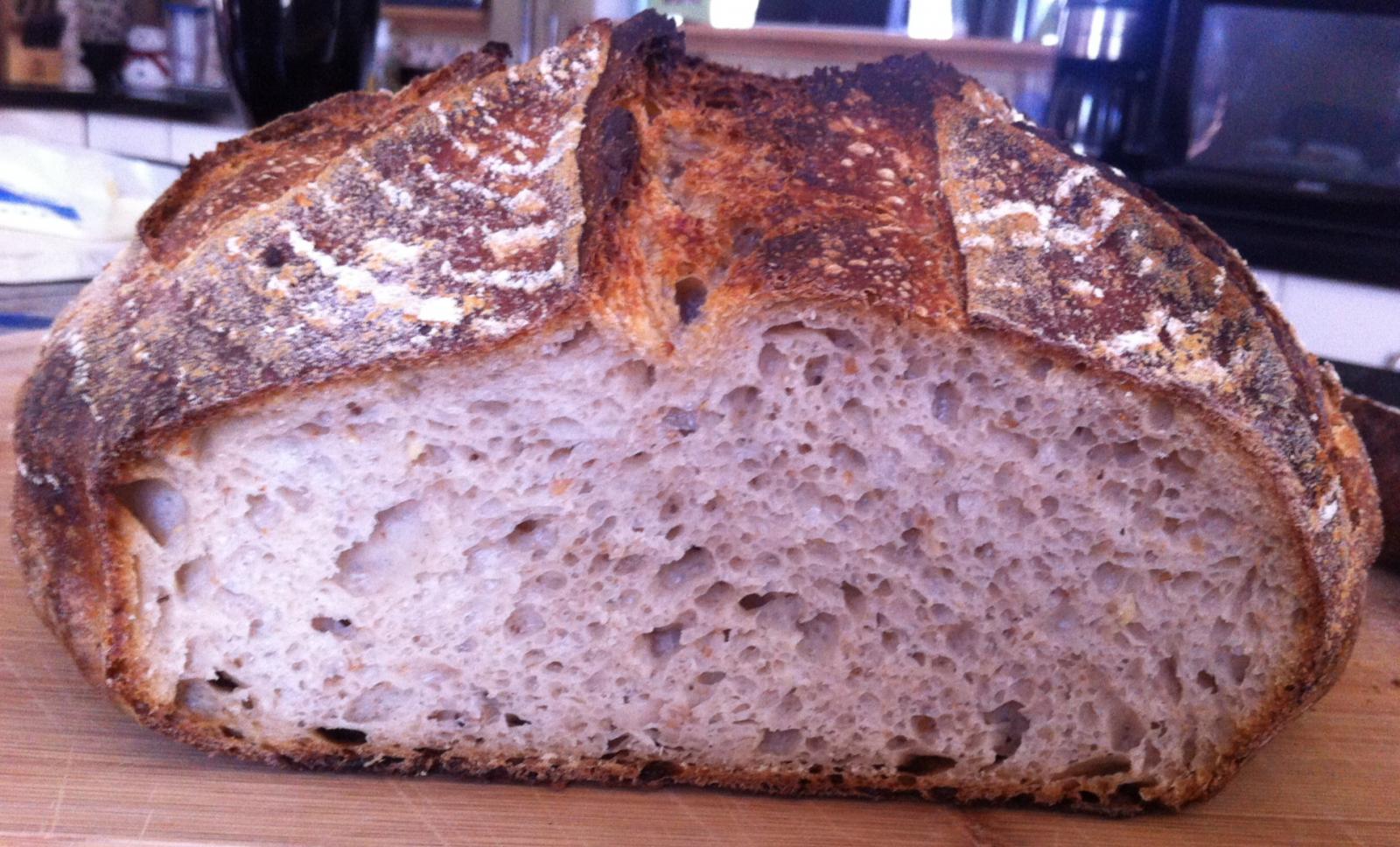 Great spring for such high hydration, too.

I'm finding the big, open holes to be a bit of an elusive goal, but this loaf came out nicely.

The crumb are crust are both keepers.

The thing about SD cultures is that they feed on the sugars that are broken down from the the starch in grains. Most of the sugars are tied up as starch and there isn't much free sugar in grains  .  Enzymes found in the whole grain break these down starches.... and heat over 157 F kills these enzymes off so they can't do their job.   So when you cook the grains and they are fed to a SD starter exclusively as porridge like your first build, the poor wee beasties don't have much to eat and they will quickly starve.  I'm thinking if you soak the grains in 125 F water and use that to feed to the SD starter for the first feed,instead of the cooked porridge exclusively, the results will turn out even better.  This is why most porridge is used in the dough and in smaller quantities than the dough flour.

The WWW is providing the enzymes for the 2nd stage but even this build will be slower than it should be too.  So the extra time was perhaps a blessing in disguise.  At any rate it all turned out well enough in the end.

Thanks for the compliment, it means a lot coming from you!

Thanks for the reminder on enzymes ... I haven't brewed beer in awhile but the same concept is true for the enzymes in barley malt. Reminds me of decoction and infusion mashing.

I'll make sure to control the temperature more accurately on the next go-around.