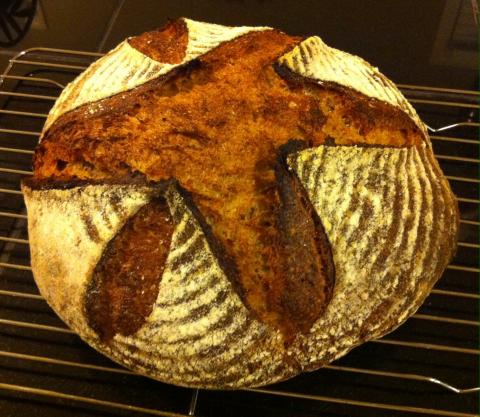 I was intrigued by dabrownman's "more than 15 but less than 30 ingredient challenge" so I decided to give it a try by modifying Reinhart's BBA Basic Sourdough. I bought a package of Bob's Red Mill Whole Grain 10 Grain Hot Cereal, which appears to be coarsely milled whole grains, and chose to substitute 5 oz of starter with 5 oz of dry whole grain (Reinhart's recipe calls for 10.2 oz of preferment, in this bread I used about half as much). I made a bit of a mistake here as I added enough water to soak the grain overnight which totaled 7 oz of water ... my intention was an 82% hydration loaf using 100% hydration preferment and soaker but it's pretty obvious the soaker exceeded 100%.

KAF AP: 1 oz (I intended to use more but the bag ran dry)

For the fluid I used Flying Dog "The Truth" Imperial IPA (12 oz) and 5.5 oz of additional water.

I autolysed the flour overnight for 12 hours, then added the salt, soaker, and preferment. 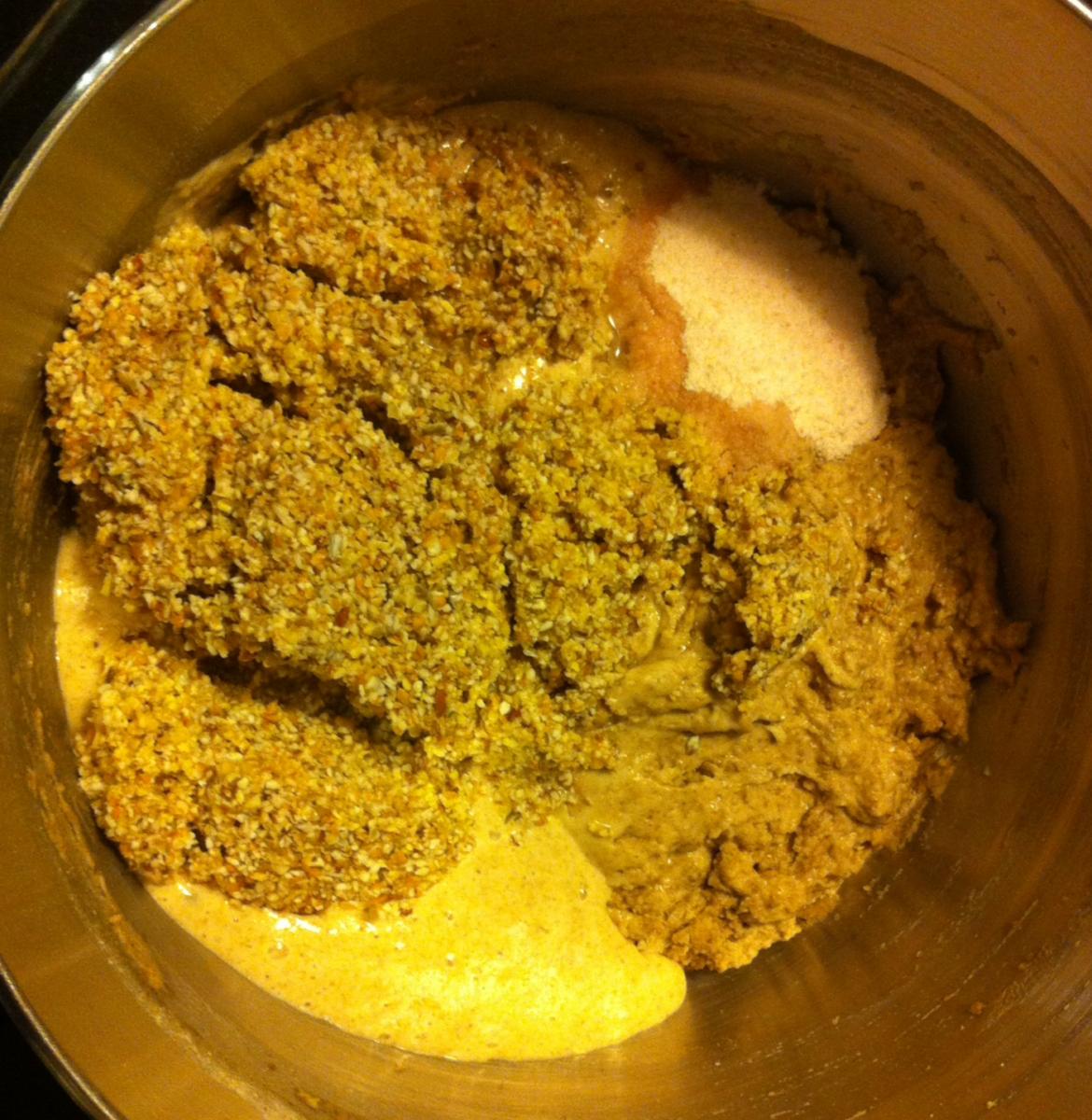 I mixed the mess with my Kitchen Aid using the dough hook ... then proceeded to knead in 5 minute intervals with 10 minute rests in between each interval. I let it sit out of 2 hours at room temp, then let it ferment in the coldest room in my house (about 55dF) for 5 hours, then into the refrigerator overnight. I preshaped it in the morning and then put it back int eh fridge ... it was very wet and sticky but I was able to stretch it and form a boule. Back into the refrigerator for 8 hours. Then for the final shaping I gently stretched it and formed into a boule, then into the brotform ... then into my utility closet (90dF) for 1.5 hours for final proofing.

I preheated my DO to 550dF and put the dough in and lightly scored it. After 5 minutes in the oven I reduced the temperature to 515dF and baked another 10 minutes. I then removed the bread from the DO and put it on the baking stone, and reduced the temperature again to 475dF. After 15 minutes I measured the internal temperature which read 195dF, so I left the bread in the oven for another 10 minutes ... at this point it was pretty dark so I removed it from the oven.

Crumb shots later, unless my wife decides to give the bread away, lol.

EDIT: I couldn't wait so I lopped a slice off a few minutes ago. I'm pleased with the crumb. I think some of the hops came through, the outer crust is a touch on the bitter side. The crumb is moist, likely from the corn, and was delicious with butter. Will be interesting to observe the flavor as the loaf ages. 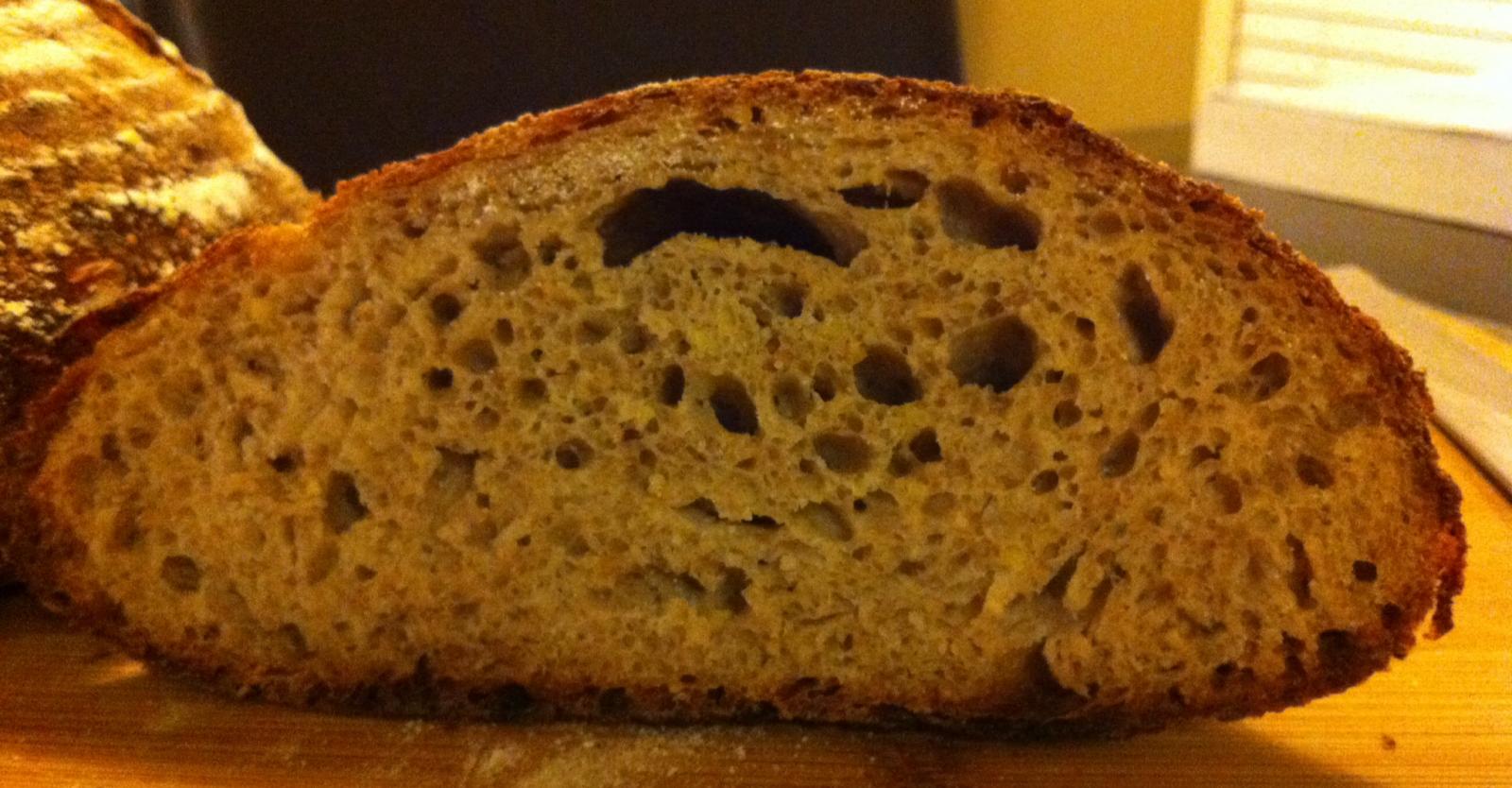 Thanks for the kind words. It appears the dutch oven helps a lot, although I've learned a lot and things seem to be coming together nicely.

Would it be a good idea to cook the soaker (and, of course, let it cool) before incorporating it into the dough? As opposed to soaking the whole grains in cool water (i.e. room temp or slightly cooler) overnight?

is it still a soaker or does it become a porridge?

... since it's a breakfast cereal I'd guess that it becomes porridge-like ... tomorrow AM I'll cook some for breakfast and report back.

seems to have a bunch of everything in there from beer, to double retards for the bulk ferments to sprouted grains and who know what else.  Lucy is proud of you and your effort.  You are the first one to give this challenge a go so it is nice to be first!  That is a very open crumb for so much heavy stuff in there too.  Has to taste great,  Can a scald, gruel or porridge be far behind?

Excellent-looking loaf! I hadn't seen this challenge before, but it's great.