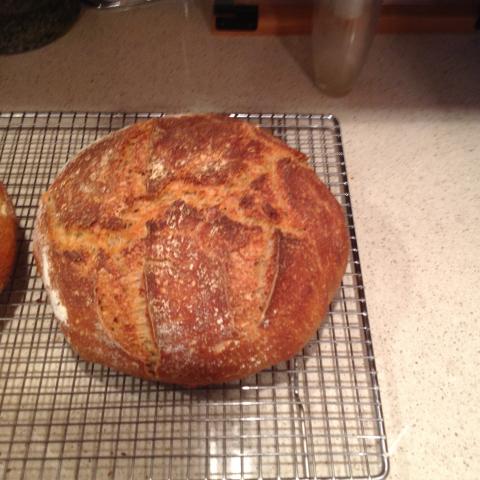 After mostly making levain breads from Hamelman's bread, I decided to try Ken Forkish's approach which is quite a bit different.  I had made bread using the Dutch oven technique a long time ago when the method was popularized. It seemed like everyone was jumping on the band wagon. A number of books came out with variations on that technique. What I noticed was that for the most part the recipes were white breads with some subtle flavor additives, and I have always favored breads with a fair amount of whole grains. So, though intrigued with the method, I was not that excited about the recipes for that "new" technique.

I did try that method around that time and it worked quite well, and I even felt it was a nice change from the breads that I was making. However, I still craved the whole  grain formulas  and found the procedure of depositing  dough into a blazing hot pot rather scary. So I went back to making breads the more usual way a la Hamelman and some others.

Now, after stumbling on some posts here at TFL, I saw some wonderful write-ups on the breads from Ken Forkish's book abbreviated here as FWSY. I was particularly interested when I saw dmsnyder's 2 posts on the 75% whole wheat bread from his book. (http://www.thefreshloaf.com/node/40675/75-whole-wheat-levain-bread-fwsy  ).  So now I was intrigued once again. I asked him and lindyD some questions on the method, and today with the Forkish book from the library,  I baked the 75% whole wheat  bread. I think it may be one of my best breads that I have made to date. I was a bit skeptical when I started, thinking that the bread might be heavier than I would want, but the texture was really nice considering the amount of whole wheat in the formula. I highly recommend this to anyone.

I also worked on making the method less scary. I know that both dmsnyder's and lindyD use a Lodge Dutch oven combo to make the process safer and easier, but being reluctant to add yet another piece of equipment to my already excessive collection, I worked on coming up with my own solution, getting some ideas from lindyD. So this is what I finally did. I proofed the dough in 2 bannetons in the refrigerator overnight as directed. I then preheated my oven with my 6 quart Dutch oven to 450 F.  After 45 minutes, I took the first loaf out of the refrig and inverted it on to a peel with a greased piece of parchment paper on top of the banneton.   The bread dough was now on the peel sitting on the parchment paper, so I trimmed the paper so I would be able to lower it into the pot. I took the pot out of the oven, slashed the loaf, sprayed it with water, and then lowered it into the pot holding onto the parchment (with oven gloves on). It worked nicely. When the first losf was baked, I repeated the process with the second loaf, reusing the parchment paper. 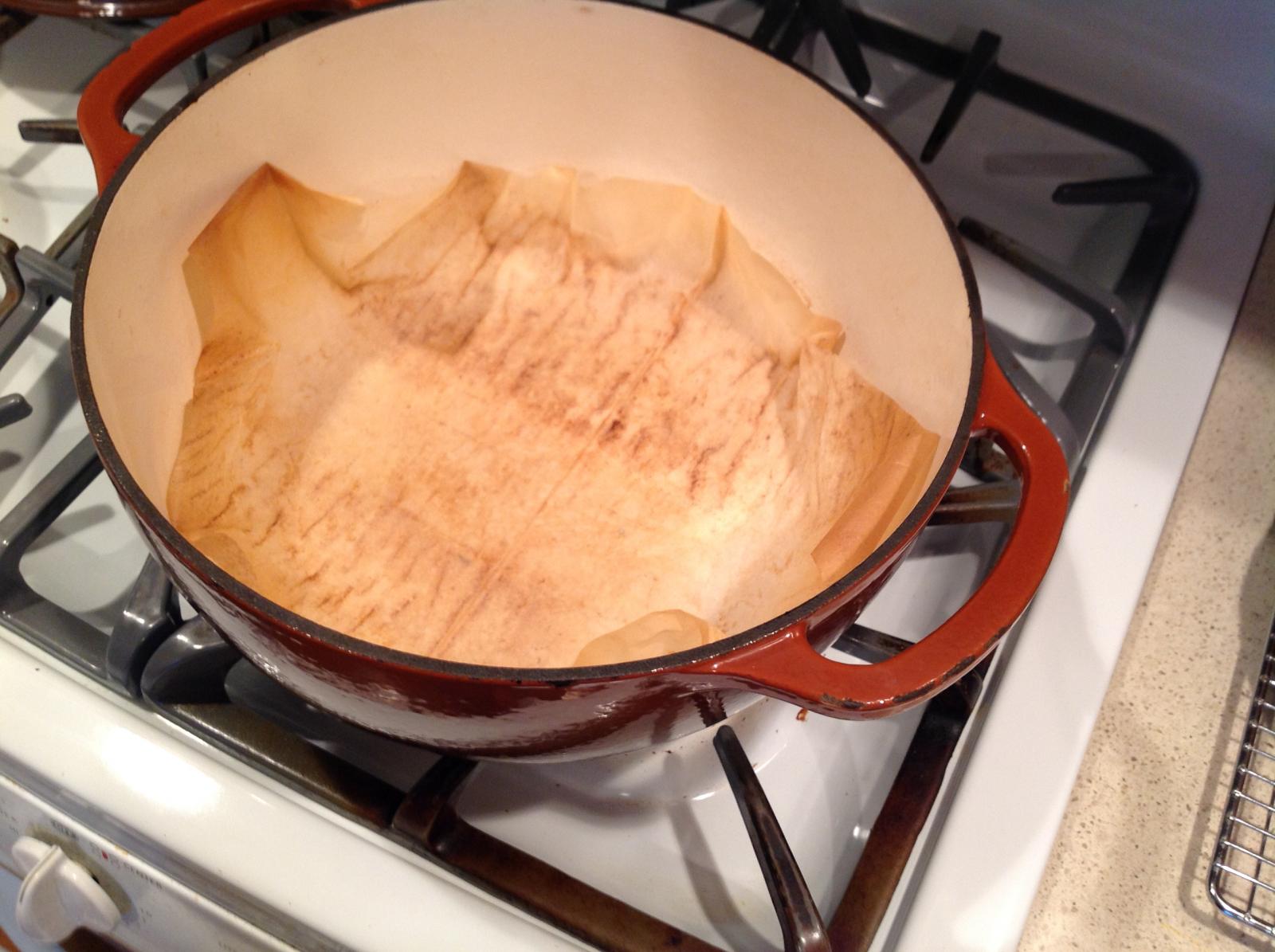 So now I am a big fan of "Bread, Water, Salt, Yeast" and look forward to trying more of his breads, and perhaps using the technique on the more standard formulas. I will, though, test to see if a similar result could be achieved using a stone and an aluminum pan lid. That way I could bake the two loaves at once.

This is a picture showing the crumb: 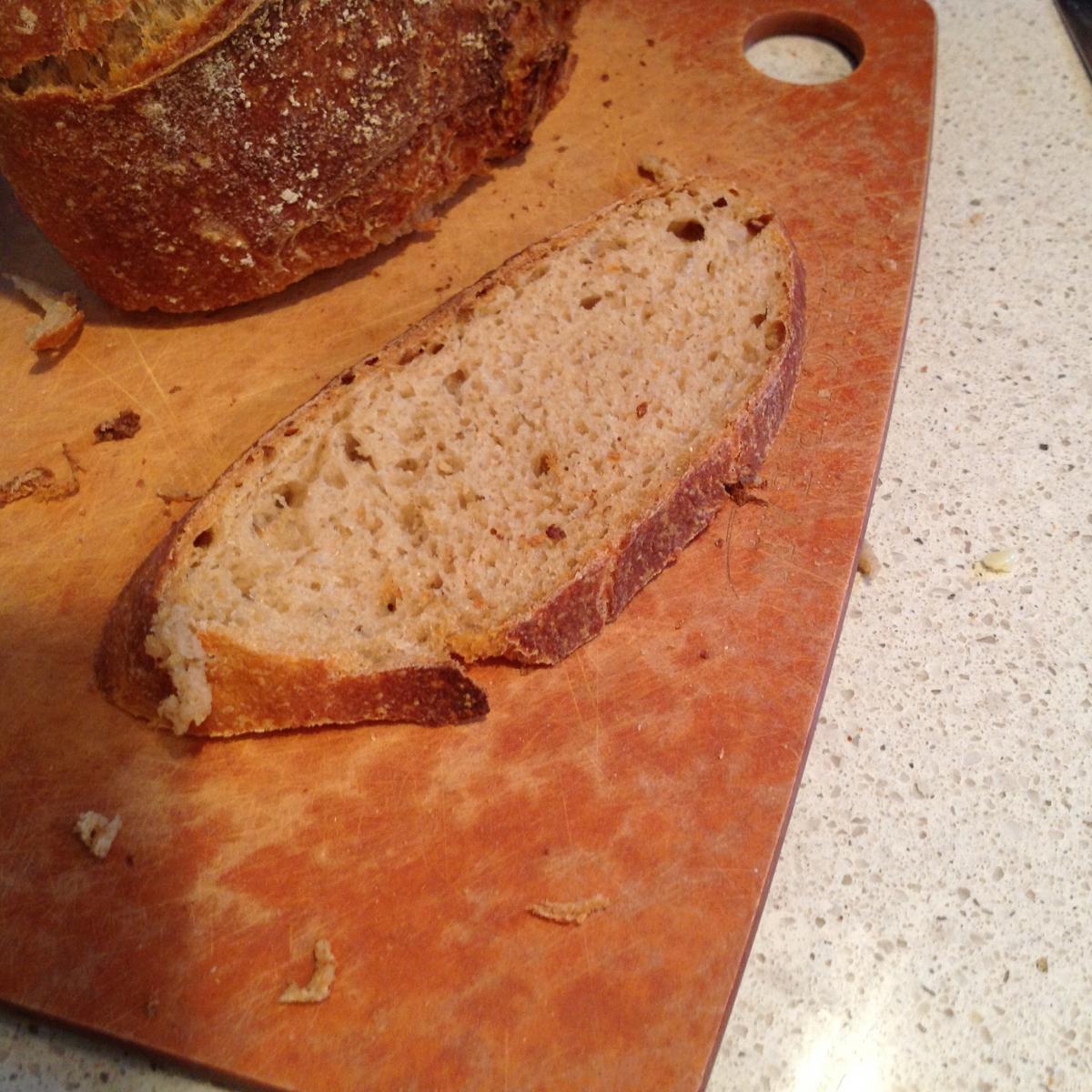 taste as good as it looks.  Well done

I'm baking a 85% hydration 50% whole grain (half sprouted - the latest bread fad) SD bread right now and to make the process safer. I just slide the dough ( that was inverted onto parchment on a peel and then scored) onto the  stone and invert the hot pot over the bread to steam.  No dropping the bread in a hot pot and messing with a lid that way.  Seems to work just as well.  You might give it a try and see how it works for you.

Yes, the bread is even tastier than it looks!  Thanks for the complimentt, dabrownman. I just had a sandwich with it for lunch. My husband said that it doesn't get any better than this!! I highly recommend that you try it.

By the way, the reason that the slice looks so light is that I used white whole wheat flour. I find that I can use it interchangeably with regular whole wheat.

Thank you for your tip. I wonder if it is even necessary to use a heated cover with the stone. I might try just using a disposable aluminum roasting pan with the stone next time, and then if I don't get as good a result, I will try your heated pot method.

I also have started experimenting with sprouted wheat flour a la Reinhart's new book. I got pretty good results with his levain bread on my second try. I posted it here: http://www.thefreshloaf.com/node/40502/peter-reinharts-sprouted-whole-wheat-bread I do not sprout my own flour. It is enough for me to take all the other steps that I like to do to get good bread.

i just posted about a bread that I just made- sourdough walnut bread from Nancy Silverton's book. See it here: