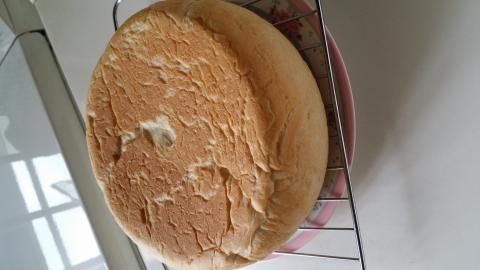 I have always been interested in baking but I do not own an oven at home. Occasionally, I would borrow my neighbour's small oven to bake small cakes like cupcakes, muffins and etc. However, I'm more interested in baking bread than cake, most probably because I prefer eating bread over cake. Without a proper oven, no matter how much I wanted to try and get started on bread baking, I guess it was quite impossible. Besides, I barely had time back then to bake often so buying an oven to place in my space constrained kitchen didn't seem like such a good investment. I cannot remember how many years back, I came across this Japanese anime Yakitate Japan! and watched the series together with my brother. I definitely saw the rice cooker bread episode and probably had the urge to make it but I ended up not making it anyway, as to the reason why, I couldn't remember...

Fast forward a few years and here I am, once again, rewatching this series and have decided to give this rice cooker bread a shot.

I followed the recipe on wikihow (http://www.wikihow.com/Make-Rice-Cooker-Bread as I do not own a weighing scale so it was easier for me to measure the ingredients by cup/teaspoon/tablespoon/cc. As for the procedure, I followed both wikihow and the video: for details I turn to wikihow while my progress I monitor it with the video (eg. how my dough should look like after kneading). Since I am completely new to the world of bread baking, I've paid really really close attention to the video, watching and rewatching the steps countless times.

Using the recipe as stated above, these are the steps that I took.

Step 1: Proof the dry yeast in 0.25 cup of warm water (this amount of water I used was part of the 180cc of water) and a pinch of sugar (which the sugar was also used from part of the 1.5 tbsp of white sugar). Let the mixture sit for 10 minutes.

Step 2: Mix the dry ingredients together in the rice cooker pot, namely the flour, sugar and salt. Then add the milk, water and yeast mixture. I kneaded with my hand for 10 minutes until the dough was not wet and gooey anymore such that it doesn't stick to my pot.

Step 3: Add the small (and softened, not melted) butter in the middle of the dough and knead it inside the pot. By doing so, you are greasing the insides of the pot as well. Knead until there are no more lumps of butter.

Step 4: Shape the dough into a round ball and let it sit in the center of the pot and left it to sit for 60 minutes. (Instructions were to leave it at room temperature for 60 minutes until the dough doubles in size but my country, Singapore, has a really hot climate so I'm not exactly sure if it's room temperature if I just left it on my kitchen counter.)

Step 5: Lift the dough gently and drop it from an approximate height of 50cm. Repeat this until the dough goes back to its original size. Let it sit in the center of the pot again for 60 minutes. (Second and final rise)

Step 7: Take the pot out to cool for 5 minutes. Flip the bread onto the other side. Put it back in to the rice cooker and press cook for the third time. Keep warm for 10 minutes. Press cook again. And then it's done!

[Note: the number of times you need to "cook" your bread varies from rice cooker to rice cooker. My bread did not turn out as brown as the one in the video but it turned out soft and fluffy enough for me and my family.]

One problem I have encountered with the bread was that there was the smell of yeast after it's completed although there's no taste of it. After doing some research online, it was either I added too much yeast or I left it out for too long to ferment. Then, I went to search for the Baker's Math post that I recalled reading here on the Fresh Loaf, according to the ratio in that post, I am using too much yeast for the amount of flour I am using. I will probably be baking again tomorrow, gonna try out the recipe again but with lesser amount of yeast. For anyone who happen to come across this post, maybe you could share with me some pointers. Also, to others who wanna give this bread a try, have fun!

Note to self: I will remember to take the photos in landscape mode the next time. Hahaha!