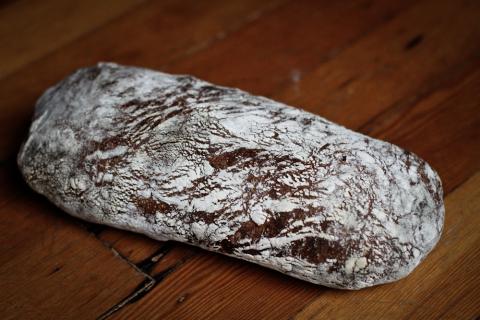 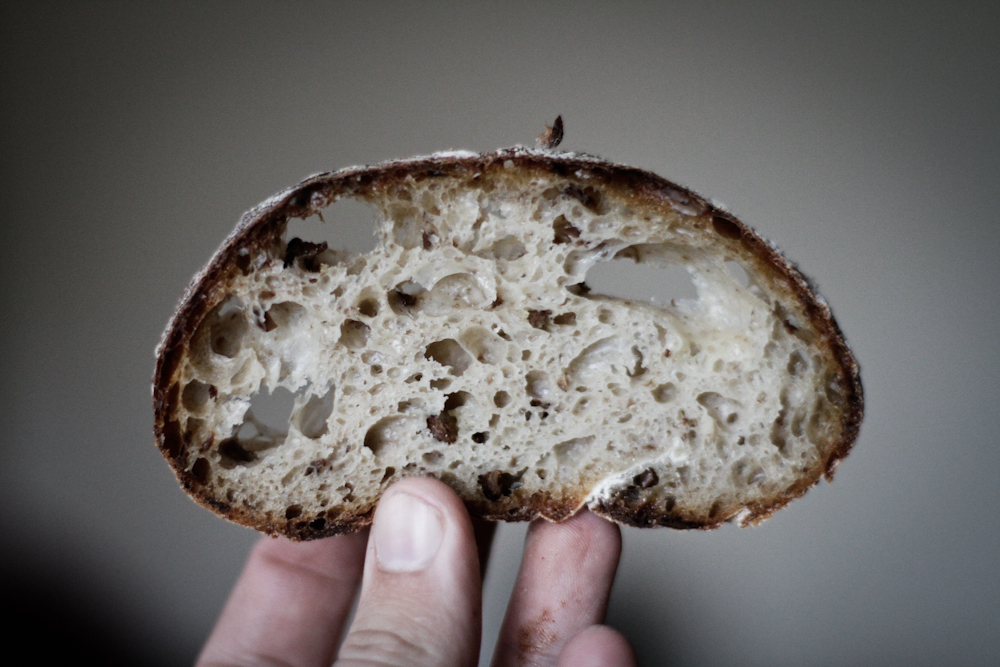 I have been baking quite a bit in my pullman pan lately and I figured I should change it up, also the pan was otherwise occupied so a rustic loaf was in the cards. Chanterelles are my favorite mushrooms and pretty much made to go in bread, all buttery and fragrant and whatnot and though I had never baked with them I figured it could only be a good thing. This loaf went fast so I only had it alone but I think it would of really been the best eaten with other food, or at least some good cheese. Also at around 92% total hydration this is probably the wettest non high whole grain bread I have made to date.

First I lightly sauté's the chanterelles with a little olive oil then roughly patted them dry with a paper towel, both to absorb the excess oil and to break them up into smaller pieces, then I combined all the ingredients but the salt and let it sit for an hour.

once it was done proofing I rolled it over, using the roll to build some tension on the otherwise very very slack loaf. Then i peeled it onto my preheated stone, poured water on my lava rocks and baked it at 500 for five minutes and continued baking at 450 for another 55 minutes rotating periodically .

That sounds soooo good.  May I feature this one on the homepage for a bit?

Thanks, That would be awesome.

It is beautiful and delicious-sounding, but I can't believe it made you skip right over the gorgeous and tantalizing wine/chocolate/cherry/walnut jobbie from the other day!

What a stunning loaf, I love the idea you've had of chanterelles!  You're always an inspiration, thank you!  The crumb is excellent and I bet this was delicious.  Wow!

this was one heck of a tasty loaf, I kept it small this time due to trying out a pretty high hydration with a relatively expensive ingredient but next time I'l scale it up for sure because this loaf went fast... and maybe use a day off foraging for my own.

Is that a typo in the levain formula?

by the many different ways that percentages can be calculated when there's a levain/preferment involved! ;-)

Each has its own validity, I guess, but this one makes the most sense to me, precisely because the flour amounts do add up to 100%

And balmagowry is right on how i calculated the formula, I count the pre fermented flour as part of the total flour weight and the water in the starter as a fraction of the total flour as opposed looking at the levain as an additional ingredient in and of its self..

Has to be tasty. Have out dried mushroom soaker water in bread but not the mushrooms themselves.  This one had to be tasty.  Well done and

how was the mushroom soaker water? what kind of mushrooms did you soak?

shitake dried mushrooms.  No sense throwing that soaking water away.

Chanterells are my favourite mushroom too and I would have never thought to put mushrooms in a bread.  Good on you for coming up with this combination and using that amazing wild mushroom.

Thanks for this one.

Chanterelles really are tops! hopefully you live somewhere were you can get yer hooks into some.

Oh yes, here in British Columbia, we have a good supply.  Quite pricey, but they do grow here.

That looks delicious, WS! both crust and crumb. Thanks for the inspiration.

Beautiful loaf.  Great idea with the mushrooms.  How about some truffles next time :)

Though my thinly stretched bank account may not be as into it as I am, we are rarely on the same page though..

chanterelles are so luxurious and delicious.  I bet your kitchen smelled heavenly.  Beautiful bread.

once it was done proofing I rolled it over, using the roll to build some tension on the otherwise very very slack loaf

What do you mean? Did you "rolled"it against the bench to rebuild tension, after proofing?

These lovely mushrooms grow wild where I live and every fall my DH goes foraging.  I'm always looking for something interesting to do with them.  Not sure why I never thought of bread! Your loaf looks beautiful.

hmm...I have not found wild chantrelles in my part of the country, but I do know a good source for "abundant" Maitake or Hen of the Woods that I can get about every other year.  I wonder if they would work as well as the chantrelles...

"Abundant" is a relative term.  I can usually get some very heavy clumps (10 to 15 lbs each) from one tree on campus, but it is nothing compared to vast harvests I have seen in more sylvan settings.  I am still bummed that my harvest this year turned on me in the fridge before I could process it.  Too much going on with Mom recovering from knee replacement surgery, nephew having an emergency appendectomy the Saturday before Thanksgiving, and out of town sister unable to travel due to water issue in her home (roof leak and pipes failure at the same time).  By the time I remembered my poor mushroom harvest, they had begun to mold.  :'-(

But I may have to save this idea for the next harvest...I bet it would be amazing as the bread for leftover Thanksgiving sandwiches.